It’s clear that Jamie Foxx is a very talented man, the winner of an Academy Award for his portrayal of Ray Charles (himself a chess player) and a Grammy Award for his song “Blame It.” 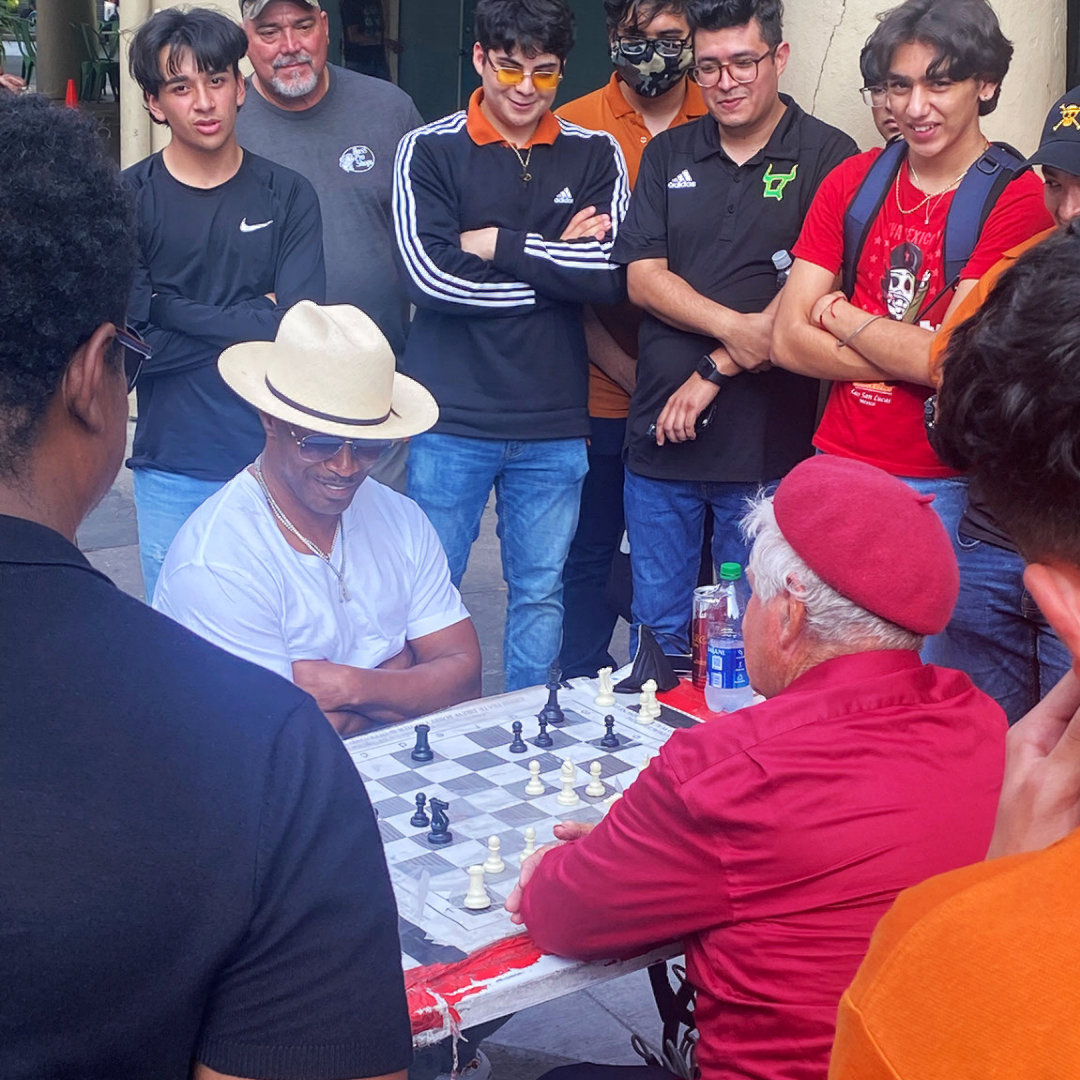 At the chessboard, well, let’s say that his career is still on the rise.

Or so says Jude Acers. 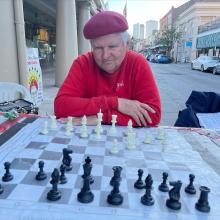 Every chess fan who visits New Orleans knows to visit Decatur Street in the French Quarter. There, on a table just outside a praline shop called Southern Candymakers, the legendary Acers holds court daily, playing games with all comers for a small fee.

Early in the evening of April 6 — Jude’s birthday — Jamie Foxx came by to try his hand against the master. Not for a film or a show, but just for love of the game.

At first it was just Foxx and a few friends, but soon, people realized who was playing, and a crowd quickly formed to witness the battle and banter.

Our man Herb Leonard (IG: @phototypeproductions) was on-hand to take these photos of a truly historic matchup. No report of the final result has trickled out, although we know that Jude had the upper hand in at least one of the games. 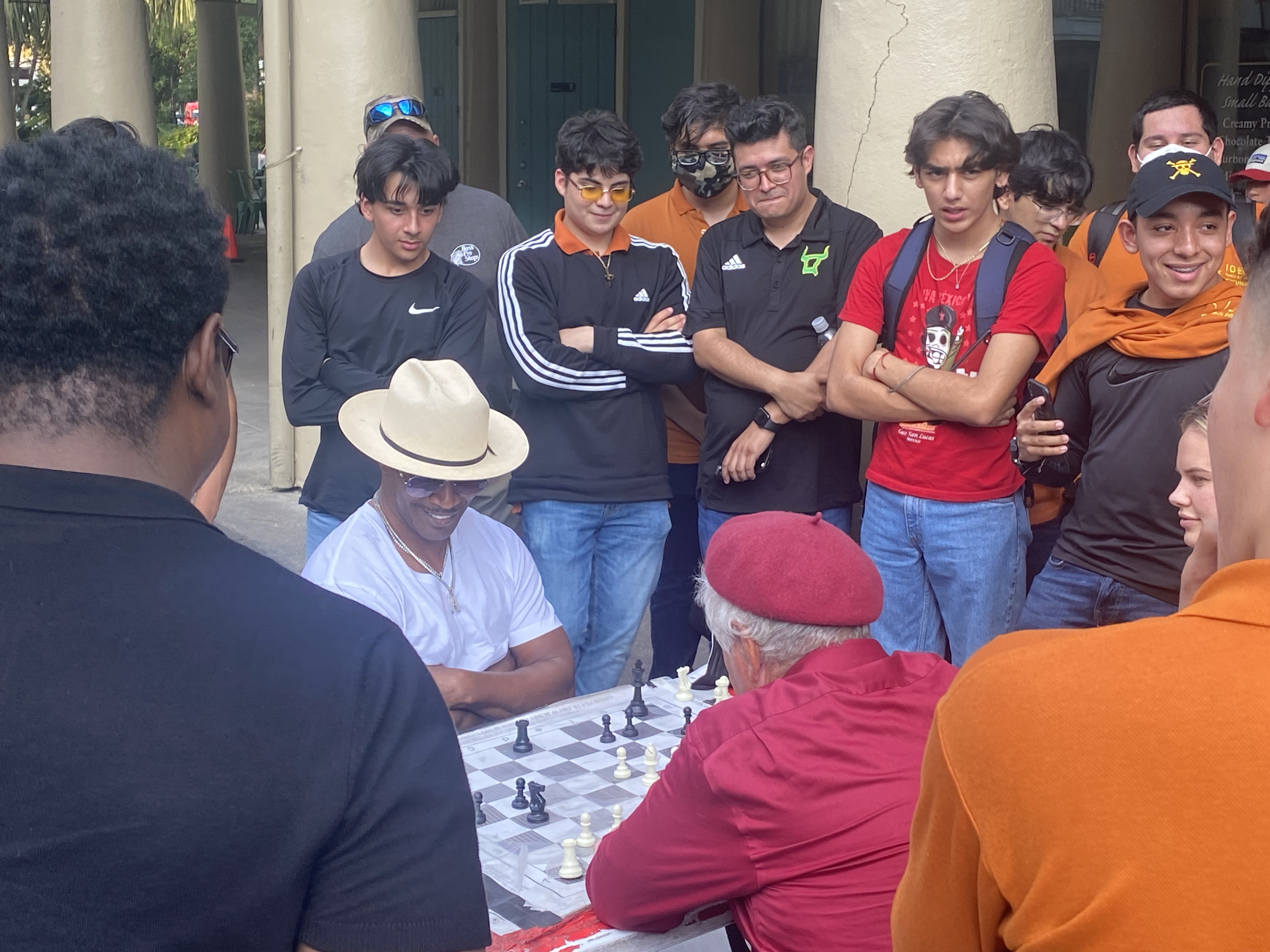 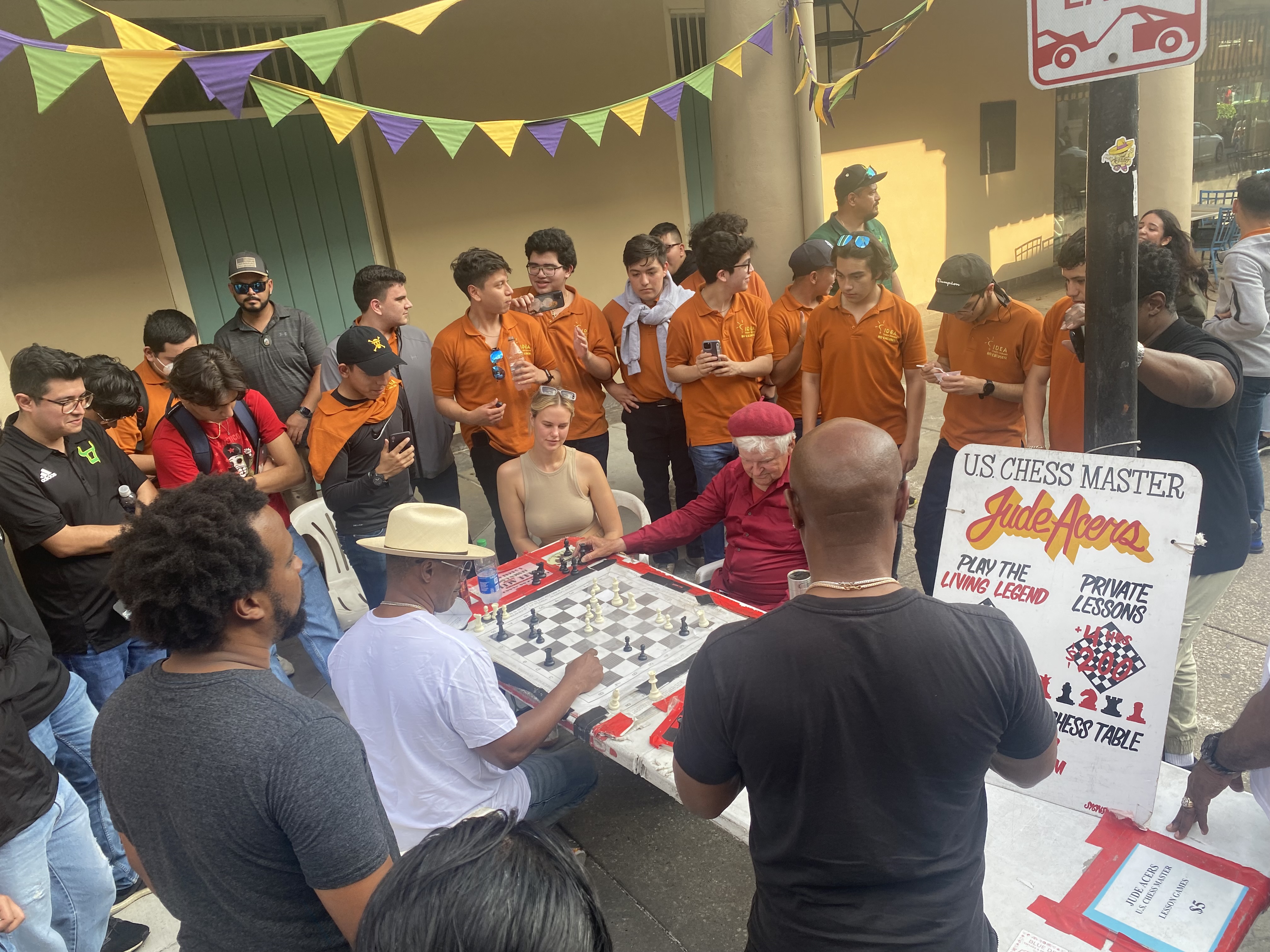 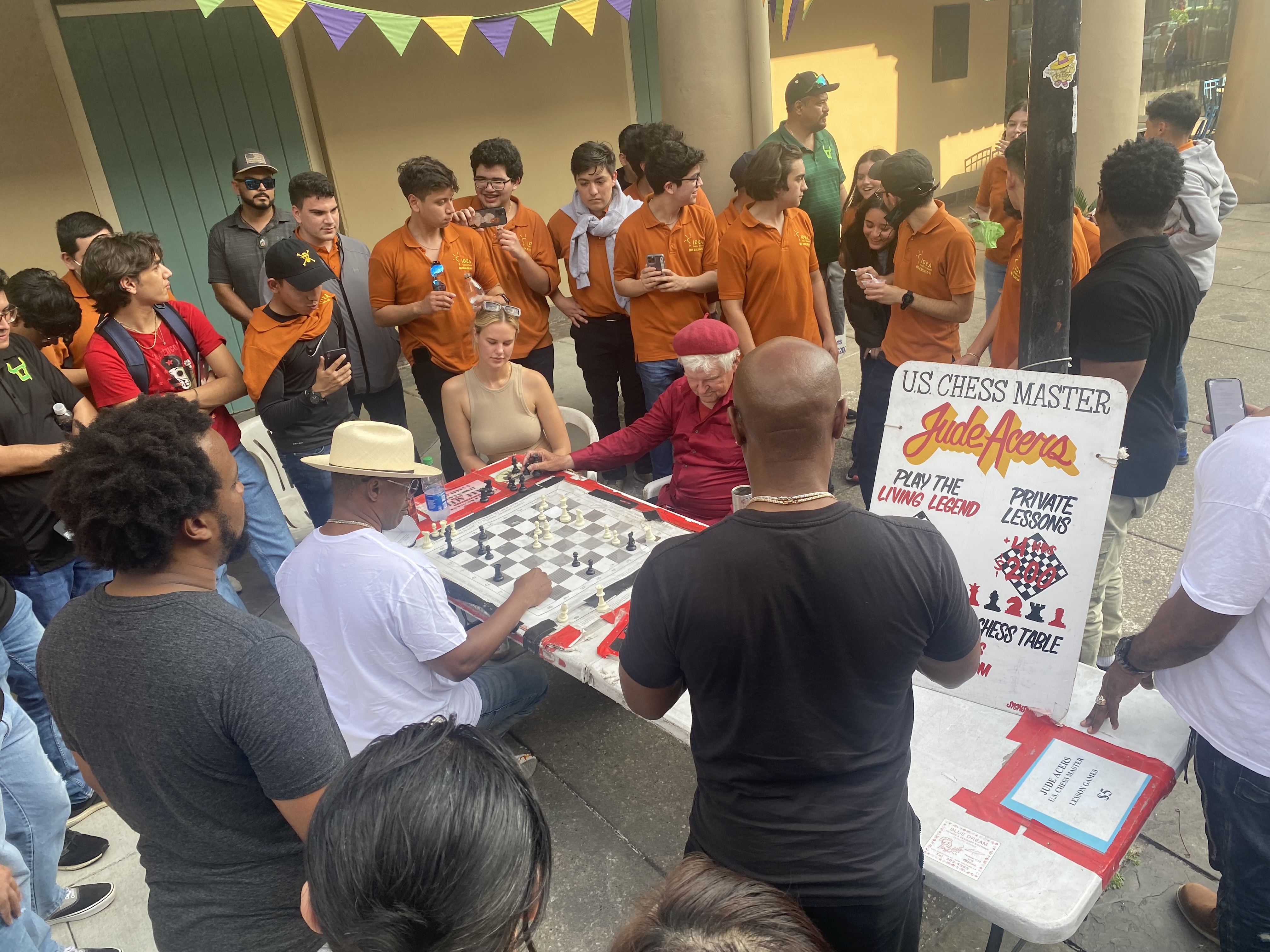 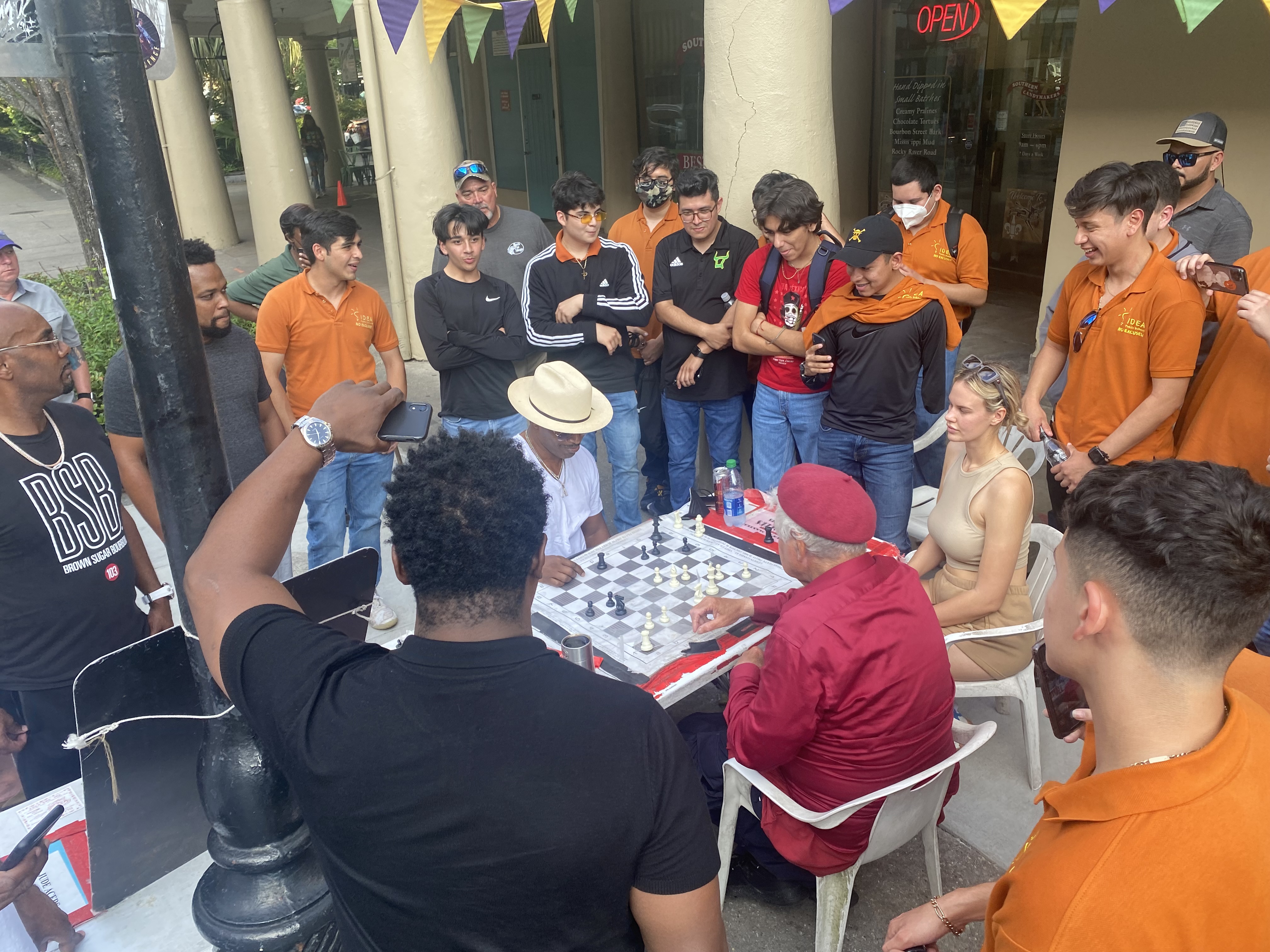 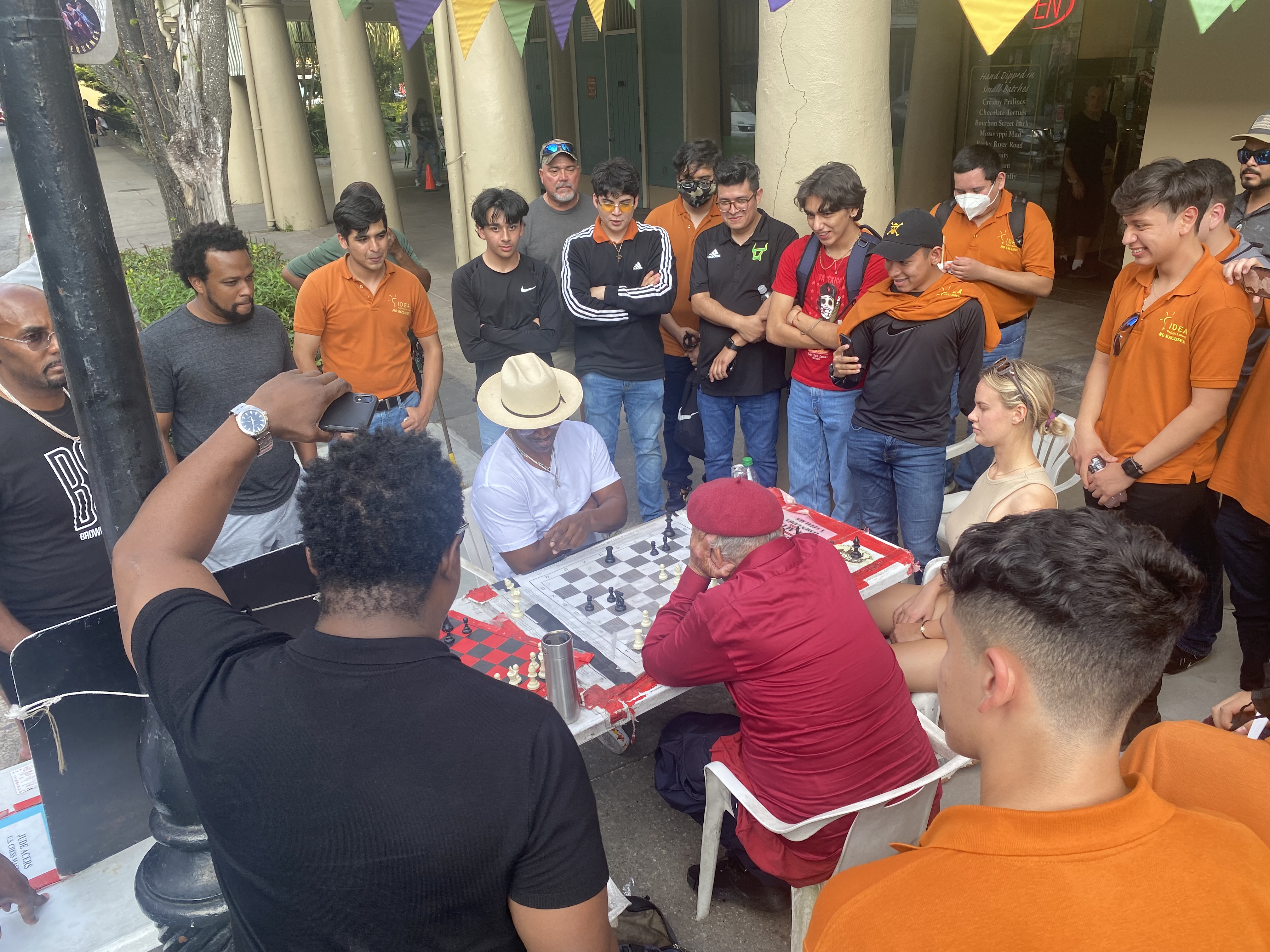 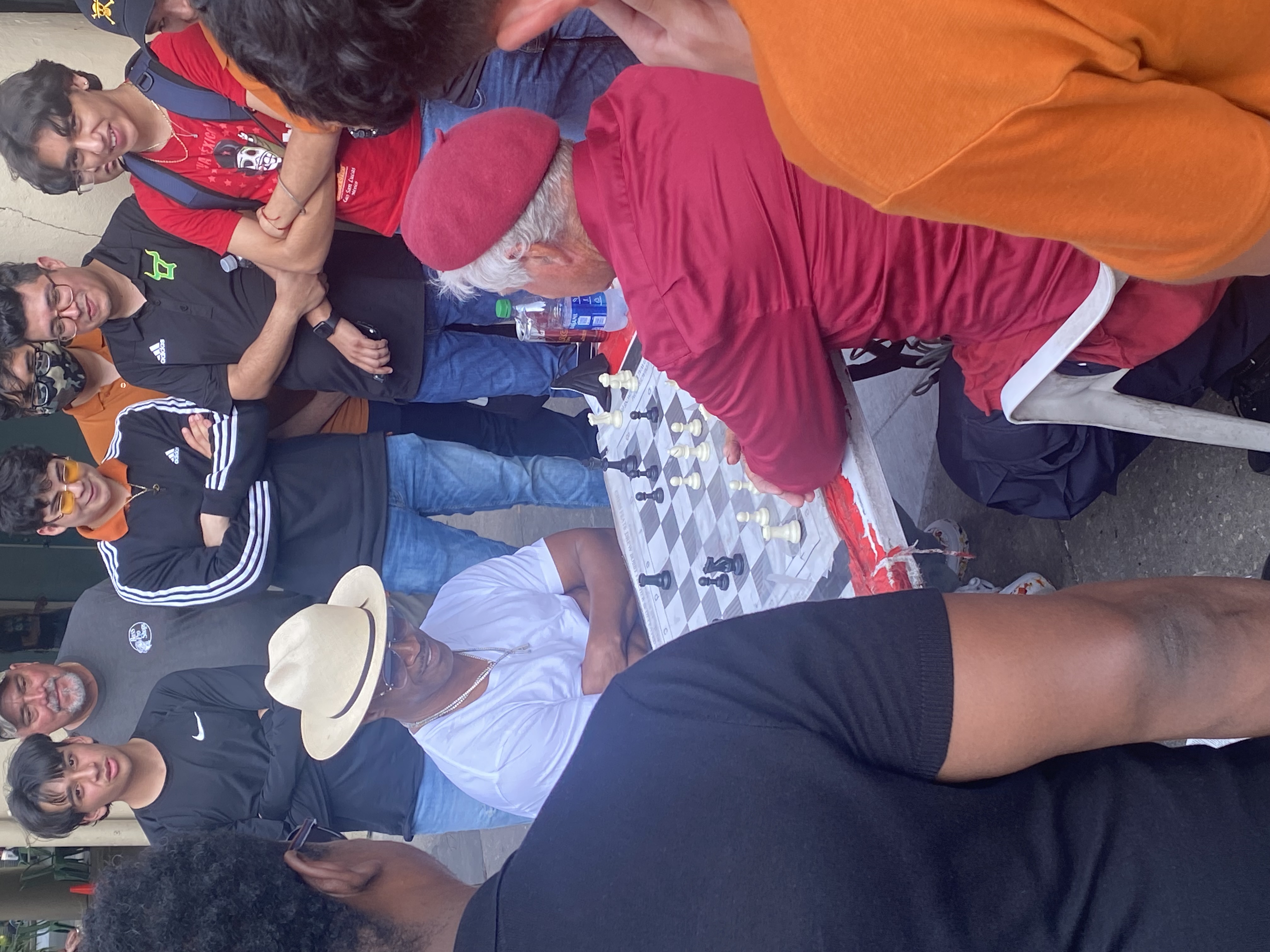 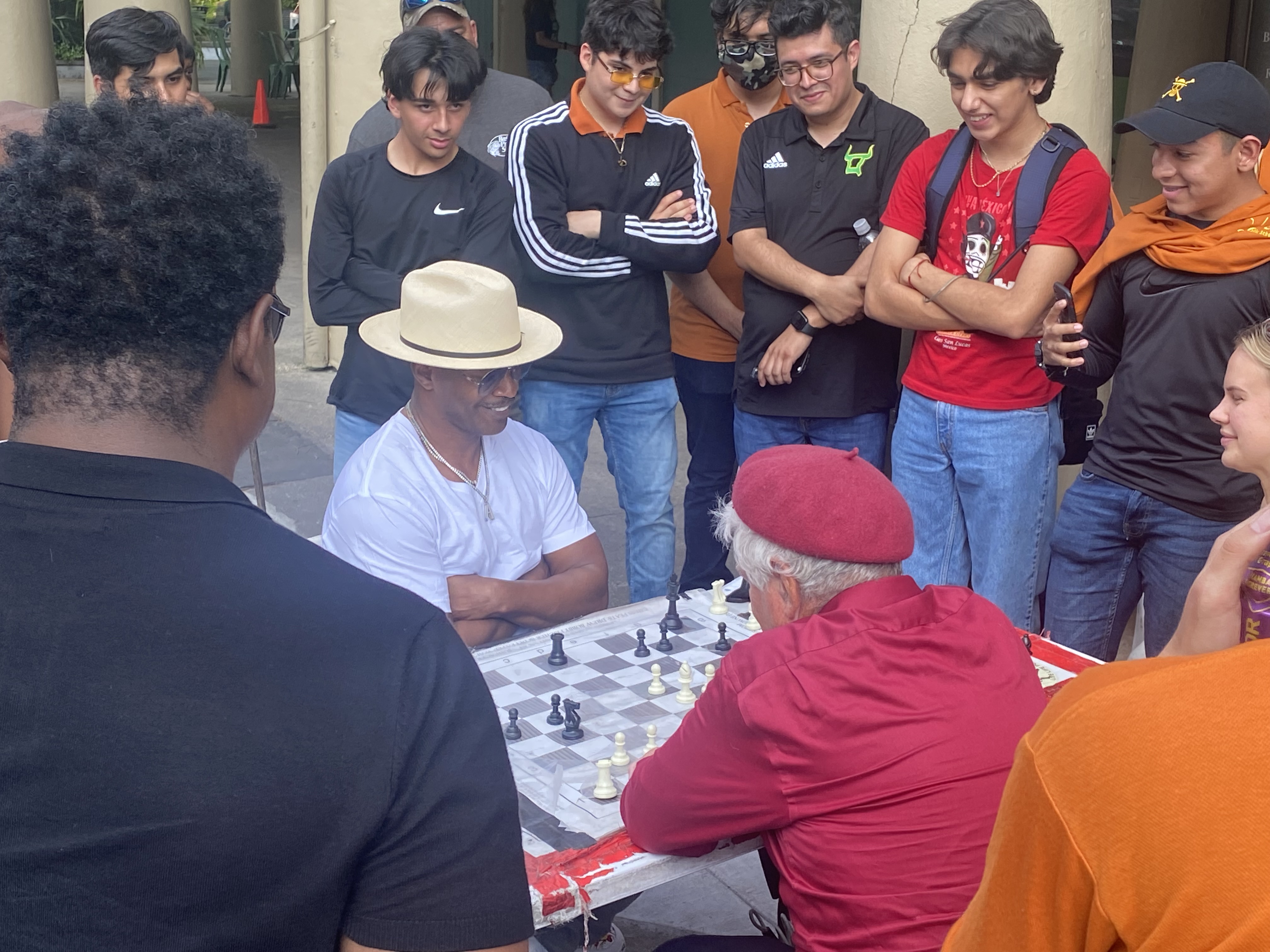 In an email to Chess Life, Acers lauded Foxx for his playing potential — “[he] would beat about 95 percent of all players... at very least 2000 ELO if he gets serious” — and for his generosity. Apparently Foxx tips very well.

This story will appear in the May 2022 issue of Chess Life.

In the movie "Ray" Jamie…

In the movie "Ray" Jamie Foxx as Ray Charles was depicted as falling for the Scholar's Mate.

FROM :JUDE ACERS WORLD CHESS TABLE / NEW ORLEANS
Gee whiz..... I am most honored , thank you so much for days of glory..." "LIVE EVERY DAY LIKE IT IS GOING TO BE YOUR LAST" ---
9o year old Portland, Oregon international chess grandmaster / WORLD FIDE TEAM OLYMPIAD best score gold medal winner Arthur W. Dake ... spoken at Mr. Dakes final incredible 300 person birthday gala/ Henry Ford Restaurant,2001 .....
However I must point out the missed elements of the world class crack color commentator Mr. John Hartmann , the chess essientials missed .. understandable for a true gentleman like him...,, . the young upstart fledgling overworked chessmaster editor...did not even mention reports from the front..the entire on fire Mr. Jamie Foxx entourage grand entrance at the JUDE ACERS WORLD CHESS TABLE which featured a truly atomic damsel you would never believe arriving on Mr. Foxx's arm of course with 6 security guards in tow plus three cars. Now that is entertainment... I kid you not... I was in sheer awe...i.e "It is things like this you remember best!" -R.J. Fischer/1969... at any rate that is no matter ... fear not dear US CHESS readers .that is what I am here for... to capture the fine details and touchy touches for our world class gentleman disgustingly pleasant editor. ..so let us speak frankly now .. cut to the chase friends neighbors and countrymen.. take it from an eyewitness... THAT IS ME...YOURS MOST TRULY... there is nothing like a crisp one hundred dollar bill after EVERY single game to boost ones morale, brighten the day.I recommend this most highly. Try it yourself!... and in the immortal words of our Louisiana State Chess Association el presidente Mr. Kevin Apper ...this inspires one to immediately add the ever helpful "Shall we have another?"
To Mr. Jamie Foxx..an electrifying shadow to Tom Cruise in the thriller film, almost forgotten today among their giant film catalogs.. "COLLATERAL" long ago... must be seen to believe
their technical wizardry on full display /sheer action adventure voltage by both titans .. to say nothing of off chart acting...you won't be going anywhere during that film, you will be afraid to move... ( to refresh the memory...has the all time classic line "Hey homey is that my briefcase?) ...TO THE FABULOUS JAMIE,I can only say thank you so very much ..YOU WERE A PRINCE MR. FOXX... ..or better yet as el presidente Mr. Apper would say "Shall we have another!"
Jude Acers/ New Orleans PS. US CHESS READERS -BELIEVE ....YOU CAN'T MAKE THIS INCREDIBLE STUFF UP..... as Mr. Hartmann noted , no lie .... no joke...it really was my birthday to boot.