One Move at a Time December Edition: GM Maxim Dlugy

Welcome to the December 2021 edition of “One Move at a Time,” the US Chess podcast in which Dan Lucas, the Senior Director of Strategic Communication, talks to people who are advancing the US Chess mission statement to “Empower people, enrich lives, and enhance communities through chess.”

Our guest today is Grandmaster Maxim Dlugy,  joining me in person from the 2021 National K-12 Grade Championships.  He is here doing a simul, all-comers blitz, and lecture. He was born in Moscow when it was still in the Soviet Union, and arrived with his family in the United States in 1977. He won the World Junior Chess Championship in 1985 andwas awarded the Grandmaster title in 1986 for his result at the World Chess Olympiad in Dubai, United Arab Emirates. Dlugy was formerly ranked number one in the world by the World Blitz Chess Association. His best finishes in the U.S. Championship were 3rd place finishes in 1984 and 87. He was elected president of the United States Chess Federation in 1990. Dlugy was one of the campaign managers, along with Garry Kasparov, for Anatoly Karpov when he ran for FIDE President in  2010. 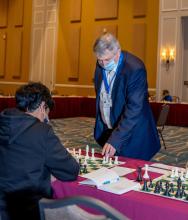 Dlugy conducting a simul at the 2021 National K-12 Grade Championships. Photo by Ana Vivas. Headshot above by Austin Fuller, courtesy of SLCC.