Olympiad Round 8: A Tough Day at the Office

There’s no way around it: this was a very disappointing day for the pre-tournament favorites.

The U.S. faced off against what has proven to be the most exciting team in the Open event: ‘India 2,’ the team of youngsters led by 16-year-old GM Dommaraju Gukesh, who (after today) is having a historically unprecedented performance with a perfect 8-0 record. 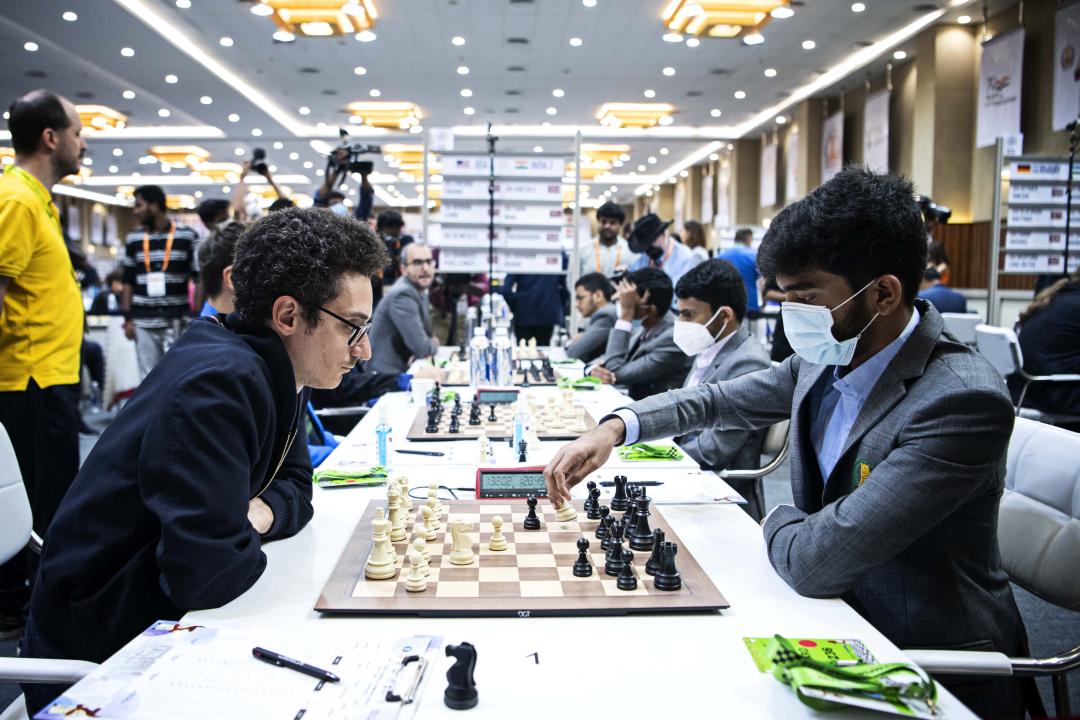 Today would have been a perfect time to halt his momentum and GM Fabiano Caruana achieved a nice opening advantage as White. He played just a little passively, however, missing some chances to expand his advantage, and then with one careless move, Caruana allowed Gukesh to take the initiative, after which White’s king was fatally exposed and there was nothing to be done.

GM Wesley So started out well against GM Rameshbabu Praggnanandhaa, using a rare move in the Accelerated Fianchetto Sicilian to throw his opponent off. 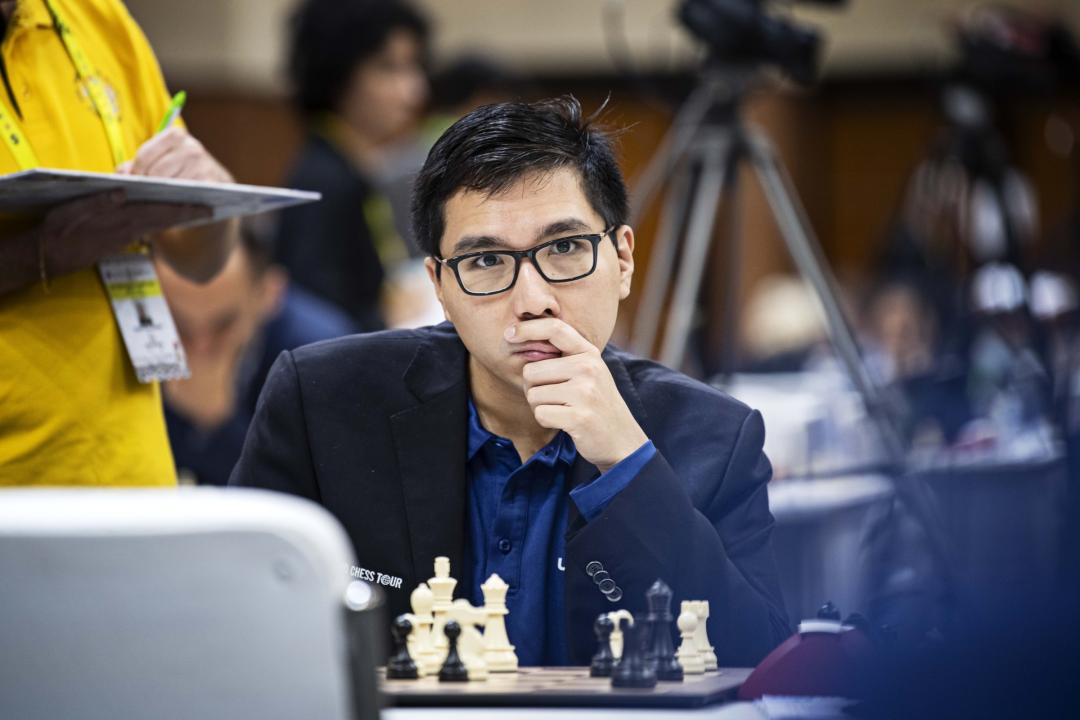 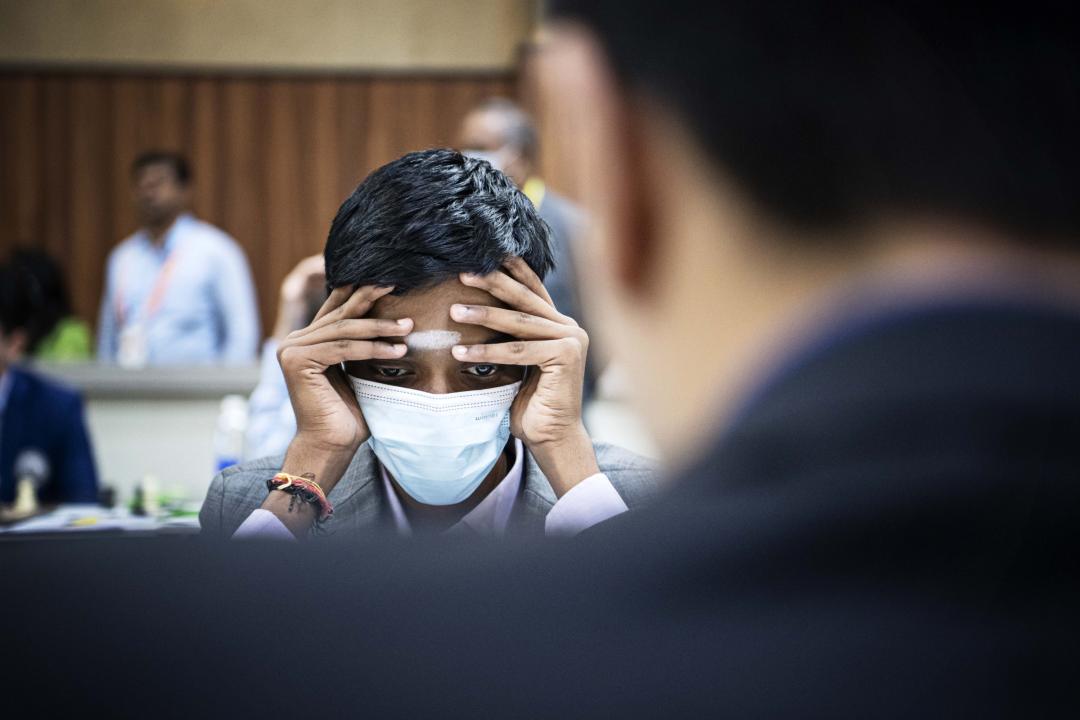 "Pragg" responded poorly, but So needed to find a strong intermediate move to retain his edge. As the game went, Black equalized and then launched a serious attack, but Wesley was able to neutralize it after a couple of inaccuracies by the young prodigy.

GM Levon Aronian was Black on board two in a Ragozin Queen’s Gambit Declined versus GM Nihal Sarin. The position was fairly calm until Aronian tried a tricky tactical sequence to unbalance things. Sarin kept a level head and found away to enter an endgame in which he was slightly better. The players agreed to a draw shortly thereafter. 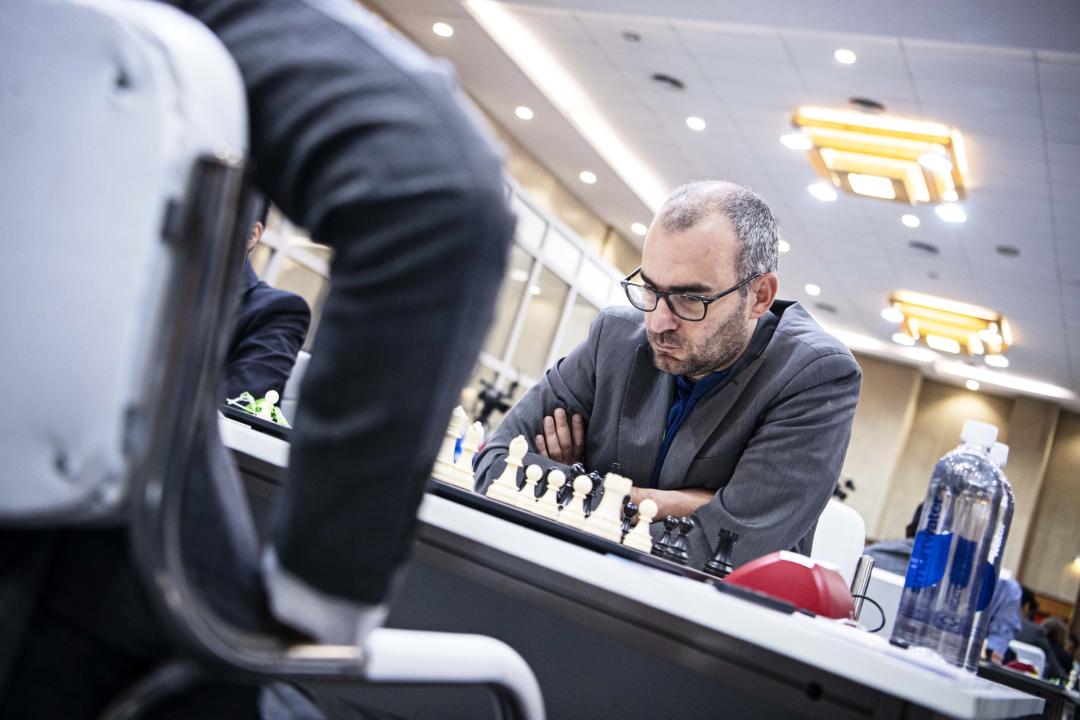 GM Leinier Dominguez Perez has had a superb tournament, but for the first time in Chennai he couldn’t save the American team from defeat. The opening was a familiar Najdorf Sicilian in which his opponent, GM Raunak Sadhwani, made a very interesting novelty as White.

Dominguez Perez immediately made a dubious response and, fortunately, Sadhwani failed to exploit it. Just when Black was gaining a serious advantage, he missed a pretty trick by Sadhwani which came very close to winning the game outright. At the time control, on the 40th move, having fought his way back into the fray, Black blundered and there were no more chances.

At the end of the day, the U.S. suffered 3-1 defeat and put themselves on the verge of dropping out of contention. Still, with 3 rounds left, a sweep could put them back in the mix, at least for a medal. They certainly have the right players to achieve that.

The United States Women’s team had another disappointing result with a 2-2 tie versus a Czech Republic team whom they clearly outranked. IM Anna Zatonskih got a poor opening, fell into some devastating tactics then fought back courageously from a totally lost position to achieve a drawn ending. But with little time remaining, she slipped up and let her opponent advance a powerful passed pawn that won the day.

WGM Gulrukhbegim Tokhirjonova and her opponent WGM Julia Movsesian were both on unfamiliar ground in the opening and made numerous inaccuracies. Movsesian had some decent winning chances towards the end, but the players were content to split the point.

GM Irina Krush played to unbalance the position versus WGM Joanna Worek and a heavy positional battle ensued. At one point Worek secured the advantage and kept it for the latter part of the game, but Krush defended well and a draw resulted. 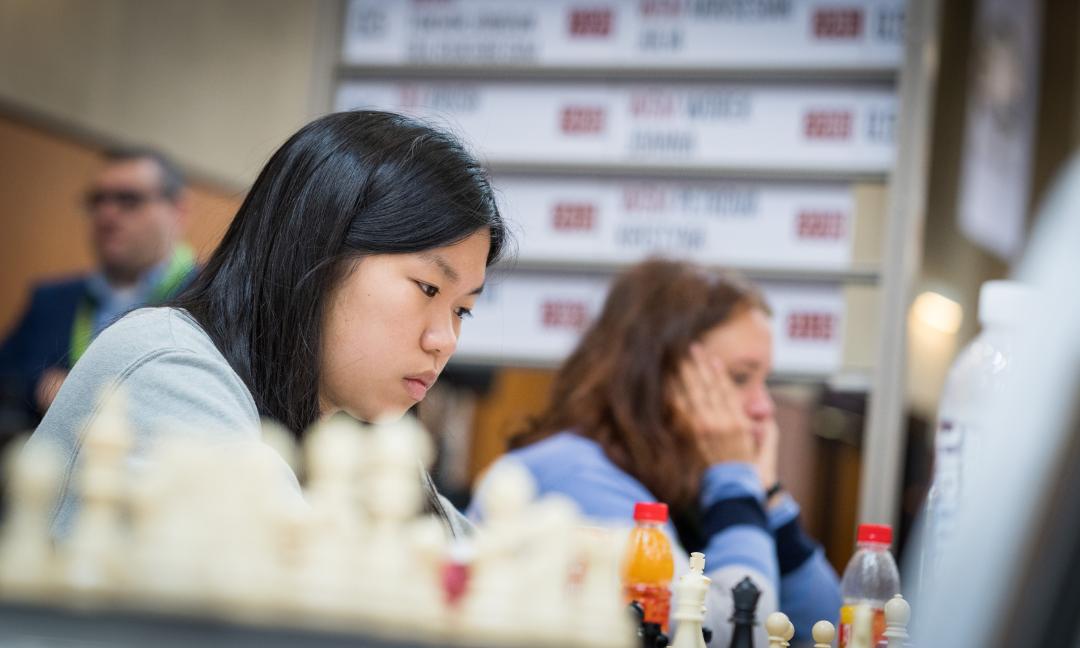 IM Carissa Yip had the lone American victory, a game in which she exhibited grandmaster-like technique to convert a better ending:

In the Open Section, with three rounds left, Armenia still has the lead with 15 match points, with India 2 and Uzbekistan a point behind. Netherlands, Azerbaijan, and Iran share equal 4th-6th place with 13 match points, and 10 teams (including the U.S.) are tied with 12 points. In the Women’s sections, India is on top with 15 match points followed by Georgia with 14, and a five-way tie at 13 between Poland, Bulgaria, Ukraine, Mongolia, and Kazakhstan.

Sunday sees both American teams face off with their Greek counterparts in what is must-win situations for both the Open and Women players. Play begins at 5:30am Eastern, with links to the biggest live streams below.