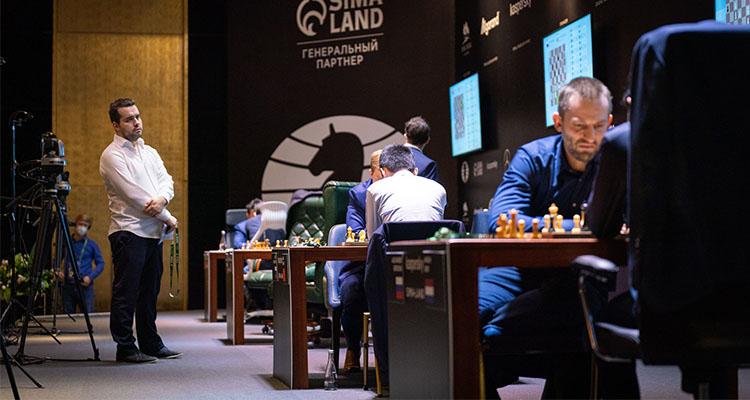 Grandmaster Ian Nepomniachtchi will be the next challenger to World Champion Magnus Carlsen.

Russia’s top GM “Nepo” clinched the 2020-21 Candidates Tournament in Yekaterinburg, Russia with a round to spare on Monday, doing his part in Round 13 with a draw as the white pieces against French GM Maxime Vachier-Lagrave. Soon after the result, however, he watched the last of the mathematical chances dwindle out of the Candidates’ field, when his closest chaser Dutch GM Anish Giri resigned a collapsed position against GM Alexander Grischuk. The results of tomorrow’s final Round 14 are moot as Nepomniachtchi, now a full point ahead, holds the head-to-head tiebreaker after defeating Giri in the tournament’s opening round.

With no reward for second place in the Candidates, the 30-year-old Nepomniachtchi’s prize is to become next in line for Norway’s Carlsen, also 30, for his fifth defense of the World Chess Championship. The 14-game match is scheduled to begin November 24 later this year in Dubai, United Arab Emirates. At the same age, the two Grandmasters will put on the line a long and rivaled history dating back to at least 2002, when Nepo won the U10 World Championship crown ahead of Carlsen – the early origins of a winning record the Russian holds over the Norwegian today.

In his last World Championship defense in London 2018, Carlsen successfully staved off World No. 2 GM Fabiano Caruana, and now will lock horns with the World No. 3, as Nepo will reflect when the International Chess Federation’s rankings are updated on May 1. Dormant for most of the past year-plus, the top of the world’s live classical chess rankings began to move again with last week’s Candidates’ activity, seeing Nepo climb to his highest-ever rating at 2796 and take No. 3 away from China’s Ding Liren. Carlsen, currently rated 2847, has held the world’s top spot since 2011.

Nepomniachtchi led the Candidates 8-player standings for the tournament’s entirety, since his opening victory over Giri back in March 2020. His only defeat of the event came in Round 7 at the hands of Vachier-Lagrave, in the last game before the tournament was halted and postponed for 13 months as the world shuttered to the COVID-19 pandemic. Nepo and MVL shared the lead at 4.5/7 when the Candidates resumed with Round 8 last Monday, and the Russian has since played the second half undefeated. He will take the Black pieces as ceremony in the 14th and final round on Tuesday against Ding Liren.

"It's a huge milestone in my career and perhaps in my life," Nepomniachtchi said. "I am extremely tired. It was one year of thinking about this tournament, one year of preparation. I am extremely happy to qualify for the match, and I am extremely thankful to all and everyone who supported me, especially to my team." 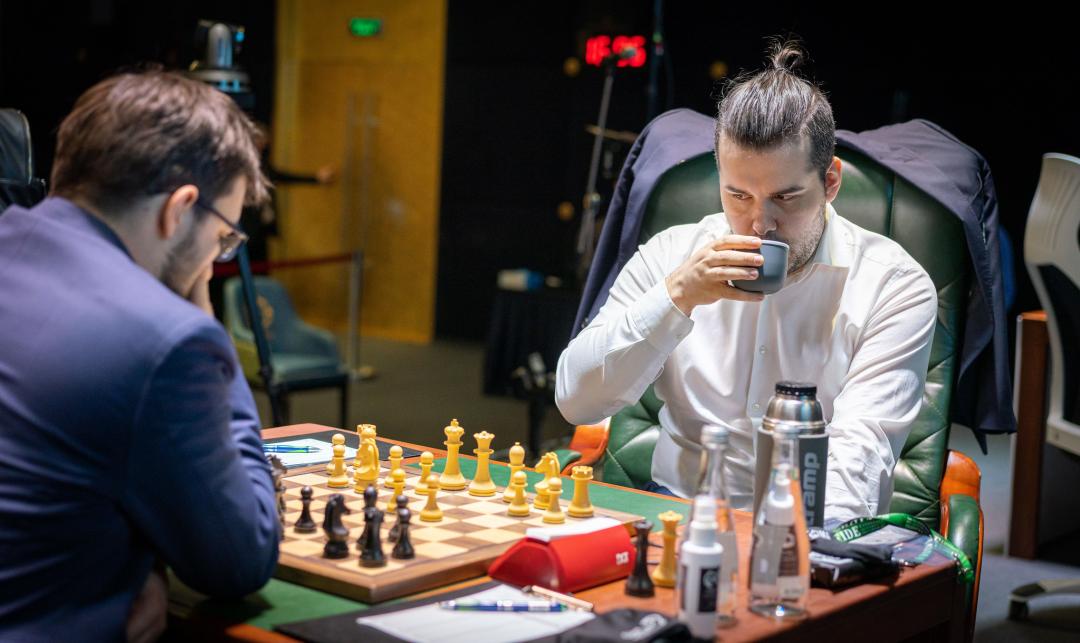 Nepomniachtchi has received solid assistance from his countrymen in the Candidates second half return, including an important win over GM Kirill Alekseenko in Round 10, and again on Monday with Grischuk taking out Giri as the Russian’s last rival for first place. While Giri may not have delivered his best day in an otherwise solid performance throughout the Candidates, the veteran Grischuk was prepared to fully exploit the Dutchman with his back against the tournament wall.

“My plan was to play like a terrorist, to terrorize him with a draw,” Grischuk said. “If he goes for a worse position, then I will play it, and that’s pretty much exactly what happened. If he played for equality, then I would just try to force a draw, and most likely succeed.

“It’s not that (Giri) was nervous, it’s that he had a difficult task to play as Black.” 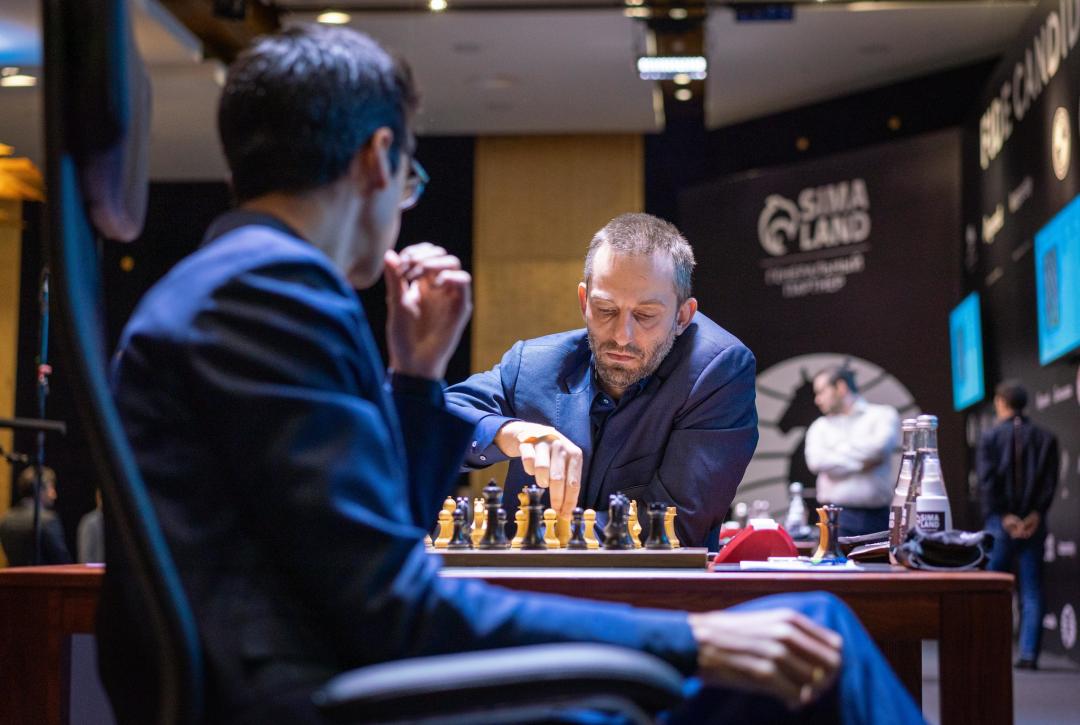 Making the situation worse, Giri played into a line of the Queen’s Indian Defense that Grischuk was familiar with, a Capablanca variation enjoyed as wins by former World Champions Garry Kasparov and Anatoly Karpov. Giri’s 14. … h5 was nearly the last move he played with initiative, as Grischuk set about first working the queenside, then capitalizing on strong central control. 29. … f5? might have been appropriate several moves earlier, but was the howler when it appeared on the board, allowing Grischuk quick liquidation up the middle and into an endgame up two pawns.

Nepo found himself in early cruise control with the white pieces against MVL, playing the English into a King’s Indian setup with a double fianchetto. Nepo forced the dark-squared bishops off the board early with 13. Be5-Bxg7, then swapped out each of the major pieces on three consecutive moves, leaving three minor pieces to contend with a locked-up center. The position repeated to a draw after 42 moves. 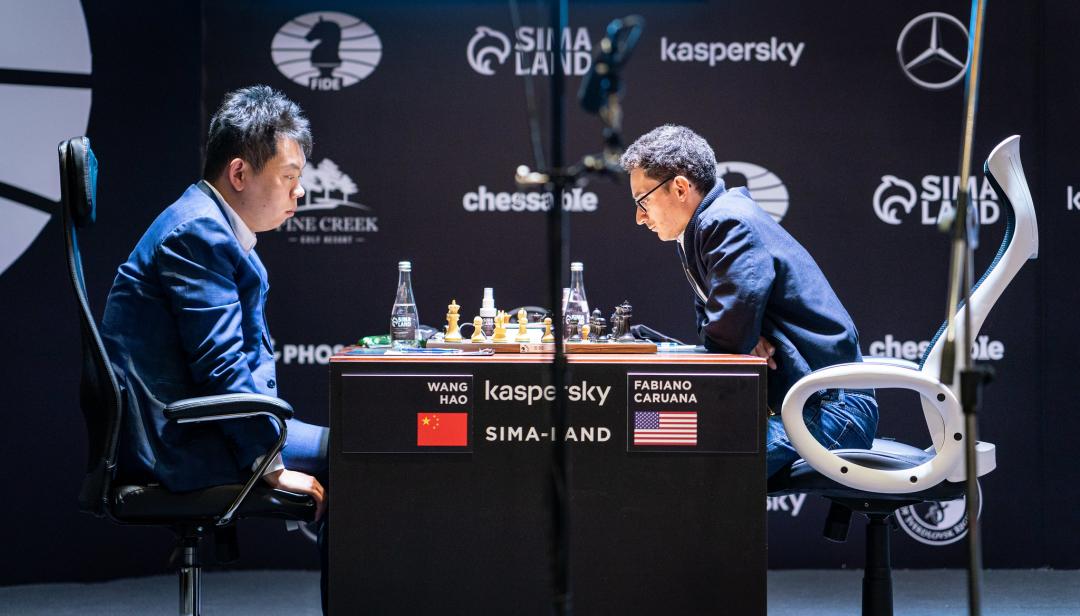 Perhaps a round or two later than desired, the American Caruana earned a win with the Black pieces in Round 13 over Chinese GM Wang Hao. In a delayed Alapin Variation of the Sicilian, the game stayed balanced behind isolated queens pawns until an exchange of knights on c4 broke up the logjam and gave both sides a passer. A nice trick by Caruana at 36. … Bc2 sent Wang Hao’s queen on the run to a1, which soon left her pinned in defense of her knight. Caruana's eventual capture of White’s d-pawn at 42. … Qd6 brought an early resignation from Wang Hao, the second time the struggling Chinese GM has been criticized for giving up prematurely in the Candidates.

And in perhaps the most humanizing game of the event, every chess player worldwide should relate with Alekseenko in Round 13, who got everything he wanted in an Italian Game and worked diligently to earn a winning position against Ding Liren – only to have it all come crashing down in one fell swoop. Alekseenko was up a piece and had an outside passer ready to run, but fell into a tunneled focus over a knight suffering from some pin trouble on d4. 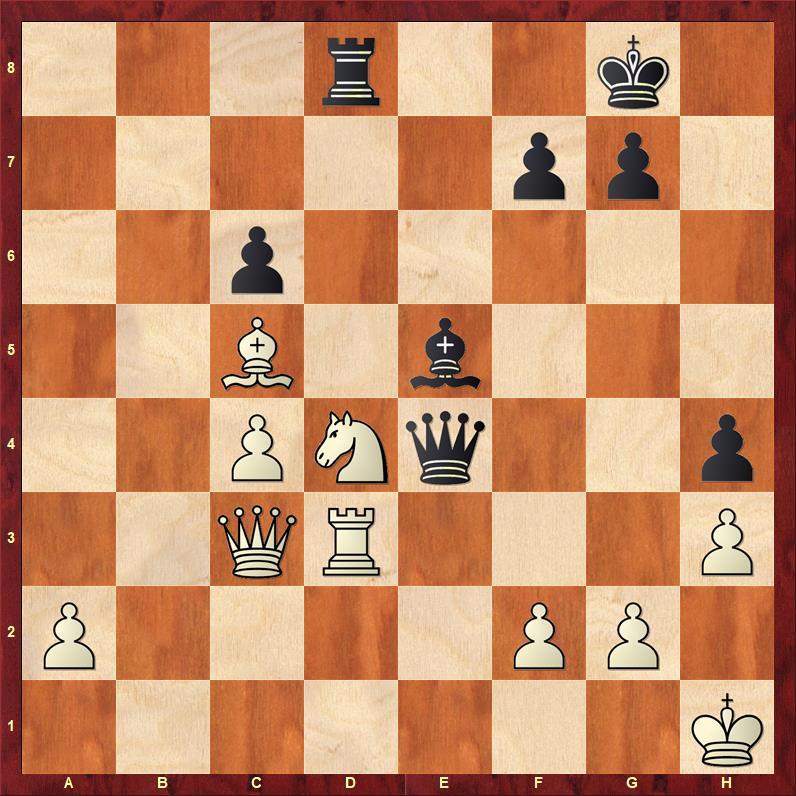 Image Caption
Russian GM Kirill Alekseenko was enjoying a winning position until 47. Bc5? Can you find GM Ding Liren's response, which all but swung the pendulum to Black?

Alekseenko’s 47. Bc5?? was the clunker, aiding the knight but completely overlooking a fresh threat on a different front. Ding Liren found it immediately, his 47. … Rb8 immediately threatening mate down several different lines. Silent in the tournament hall, Alekseenko’s body language screamed volumes.

The 14th and final round of the Candidates Tournament will begin Tuesday at 7:00 a.m. eastern, though the results will not affect the outcome. More information may be found on the official website.