From My Seat at the 53rd U.S. Chess School

I attended the 53rd U.S. Chess School hosted at the Marshall Chess Club in New York City from June 20-23. The U.S. Chess School, founded in 2006 by IM Greg Shahade, runs free annual invitational camps for top young chess players in the United States. This year’s camp hosted 12 attendees, from ages 9 to 17 years old, with a top rating over 2250 and was the first in-person U.S. Chess School event since the start of the COVID-19 pandemic.

The Marshall Chess Club, founded in 1915, is renowned for being one of the oldest chess clubs in the United States, but recent updates with new chess pieces and boards give this club a more modern atmosphere. 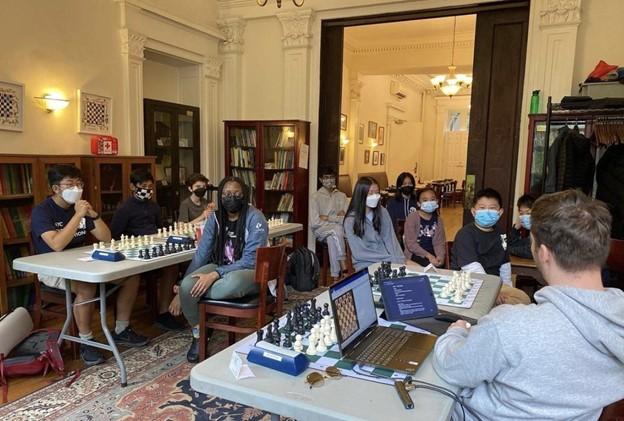 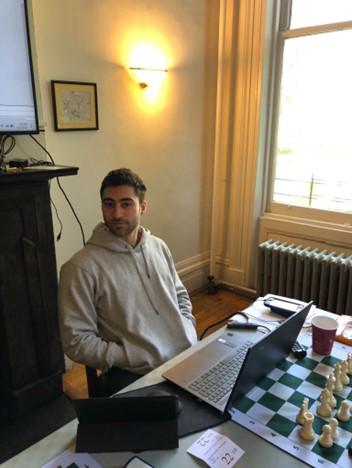 While tournament chess is a very serious and competitive process, the environment at the U.S. Chess School was more lighthearted and inviting. There were pawns being clumsily dropped every five minutes, students were collaboratively inventing crafty positions, and clocks were furiously slammed during impromptu blitz games. Alex contributed to this welcoming environment by infusing humor into his lessons.

The first lesson that Alex taught us was the importance of finding candidate moves. Oftentimes, chess players fall into the trap of looking just for tactical patterns or forced lines. To break this habit, it’s important to look for alternatives. According to Alex, finding candidate moves is “the ability to push beyond conventional ideas.” Sometimes, though a position may appear to have only one or two good continuations, having an open mind can lead to the discovery of amazing solutions.

For one very challenging tactic, our class spent more than an hour in analysis. We had to calculate 5 moves deep into a position, but this became even more complex when we had to calculate different lines for black.

After calculation puzzles, we broke off into groups to analyze compositions, positions specifically crafted to help train calculation. Just when it seemed like one side was completely winning, a teammate would point out a move that the opposing side could make, forcing us to calculate further. The composition below was my personal favorite because it required resourcefulness and thinking about all the possibilities in a position. Just when it appeared that black should simply resign, there was a resource to keep the game going. 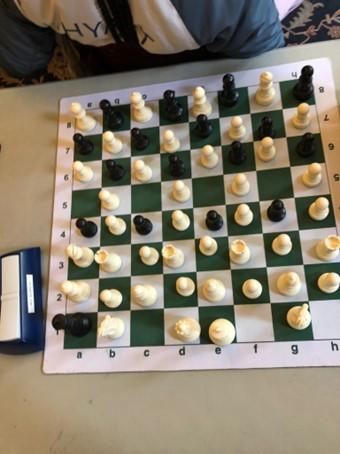 One of the integral parts of the U.S. Chess School camps are the blitz and bughouse breaks which provided the opportunity to meet and network with other players, fueling collaboration on a many chess-related projects. I know that I am going to stay in touch with a lot of the campers, and see many of them at future tournaments -- many of us are playing together at the World Open! 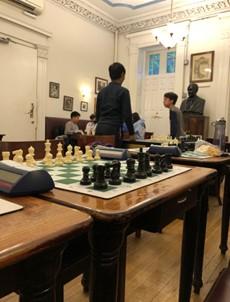 The theme for day 2 was strategy. After a grueling first day of long calculations, I was looking forward to something more dynamic. To start the day, we talked about the mini-plan, a short, concrete series of moves that improves a position even if it doesn’t lead to a forced win. Mini-plans maximize the potential of pieces, while creating opportunities for one’s opponent to slip up. Here is an example in action:

The mini-plan particularly stuck with me because it emphasized the greater lesson of finding resourceful ways to push equal positions. For example, Alex showed us a game in which Magnus Carlsen won a rook and four pawns versus rook and four pawns position against Ruslan Ponomariov, a strong player who was 2737 FIDE, simply by being willing to play on and allow his opponent to make mistakes.

In some of my own games, I’ve taken a draw because the material is equal or I don’t see a concrete way to win. But sometimes it isn’t so easy for the opponent to hold such positions, and even one slight inaccuracy can completely alter the position.

We also learned about the importance of having a space advantage.

Today’s modern engines will give the side with more space a huge edge, and for good reason. More space means more room to coordinate and maximize the utility of each piece, while also giving less room for the opponent to do the same. As GM Boris Gelfand once said, “If I control 40 squares, you only control 24, no matter who you are.”

The critical space advantage why openings such as the Benoni or King’s Indian Defense can be risky for Black as they don't offer much space in the position and, if misplayed, Black can wind up completely constricted. Below is an example of Alex, who is playing the white pieces, controlling all of Black’s major plans while simultaneously harmonizing his pieces and preparing a deadly center push.

Next, we discussed psychology, which is closely linked to strategy. When I was younger, I thought that psychological pressure was all about getting up from the board at the right times, offering draws in critical positions, and playing with little hesitation. However, through this camp I realized that there can be psychology to the moves themselves. If a queen leaves a particular file, for example, placing a rook on that file could make the opponent begin to second guess themselves.

As GM David Navara said, “I like to play moves that highlight the drawback of the opponent’s previous move.”

To start off the third day, we were asked to go around the group and name a different endgame position that we knew off the top of our heads. The first person said Philidor. Next, I said Lucena. Then, the third person didn’t have answer, nor did the fourth. Alex opened the question up to the entire group, to which there was dead silence. Everyone was stumped. Nobody could name another critical endgame position.

Alex pointed out a few more to us — such as bishop and knight versus king, or two knights versus pawn. Nevertheless, the fact that a group of 12 experienced chess players struggled to come up with even five critical endgame positions illustrates that the endgame at its core is primarily calculation, not fundamental knowledge. Alex summed up the crucial components of endgames as knowledge of concrete theoretical endgames, calculation skills, and patience and persistence.

One endgame theme I enjoyed was king, queen, and pawn. These positions can be tricky because of queen checks and perpetuals, but what I like about them is that they create rich positions that revolve around strategy. Though an opposing queen can almost always find a check, by placing our king next to the enemy’s pawns, the opponent will have to give up their pawns if they’d like to continue checking.

At the end of the third day, we played training games from starting positions, to emphasize the use of strategy and calculation rather than opening preparation. The time control for the games was G/25 + 5 second delay, and before we started playing, we were given three minutes to look at the position and come up with possible plans. This was a nice way to wrap up a long day of difficult endgame analysis. 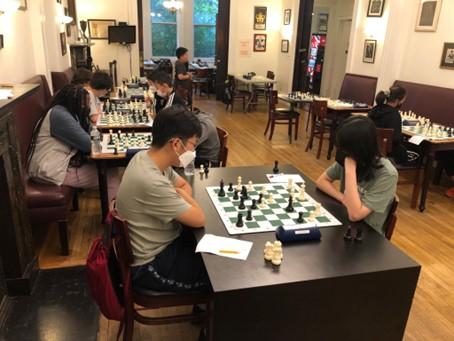 On the fourth day, we analyzed our own games. It was an interesting exercise because, unlike the model games which were well-executed, the campers’ games highlighted the natural volatility of chess and how a player can always come back from a position no matter the circumstances.

After reviewing games, we discussed how to improve as players and the resources available to us. For tactics, which help with calculation and strategic thinking, one can use online trainers such as Chesstempo. For theory, using resources such as books, databases, and Chessable are helpful, as well as playing online games with new openings can help one develop a better understanding of different positions. For endgames,

Alex gave other important advice as well, such as playing in tournaments where the opponents rating differs significantly from our own, forcing us to challenge ourselves and learn from more skilled players, while also practicing our own skills on weaker opponents.

One interesting point that came up as we concluded the camp was the role of coaches. Alex said that to a certain point, coaches can help a player improve by pointing out weaknesses and areas to develop, but as that player becomes more experienced, the role of a coach shifts slightly to more of a guiding role especially with respect to repertoire and sharing their experience. In other words, as a player improves their chess skills, they eventually are responsible for initiating their own chess improvement. 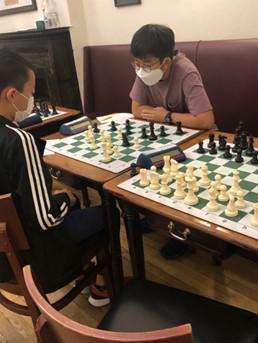 Thanks to Dr. Jim Roberts, Chessable, and Chess.com for sponsoring the U.S. Chess School. Thanks especially to IM Greg Shahade for organizing the camp, and to IM Alex Ostrovskiy for teaching us not only the essential themes of calculation, strategy, and endgames, but practical advice to use in chess tournaments, whether it be the importance of declining draws in advantageous positions, utilizing psychology, or being mindful of the clock.