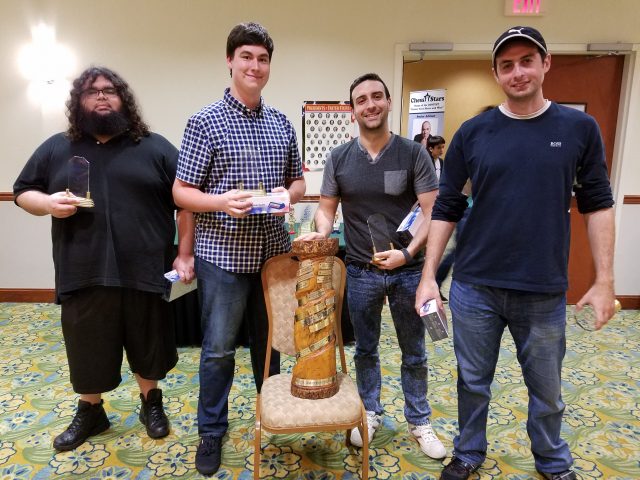 Miguel Fonseca, Yan Miellier, Dario Teodori, Vlad Yanovsky, US Amateur Team South Champions
I am 99.99% sure that chess was brought to planet Earth by aliens. I know historians have proposed India or China but I think they have the birthplace mixed up with the spaceship-landing site. How else can I possibly explain what I witnessed over this weekend? What else, besides an alien encounter, would draw men, women and children of all ages and all cultures from all corners to converge at four calculated points on one weekend? There was no prize money; the reward was the shared experience and there will be no better word I write from here on out that better exemplifies the spirit of the Amateur Team tournaments than that. Shared. There is a universal camaraderie among chess enthusiasts, team events are a celebration of this single pure truth, and the USATS (US Amateur Team South) was no exception. I competed with one team, ate with another, and shared a hotel room with another I was slated to compete against the next morning. Sure, I whispered hypnotic mantras of discouragement to them in their sleep but I was only kidding around... This year's Team South went down in Orlando with 42 teams roughly split down the middle with the slightly bigger half in the Open section and the remainder in the under 1500. Even the open section has an average team rating cut-off of 2200, hence the term Amateur in the namesake. Still, A GM, a few FM's and a WIM came out to play. This top heavy strategy failed to a more balanced team, which prevailed for clear first. The second place team on tiebreak also favored a more bottom heavy line-up. Team Mode Beast comprised of members Vlad Yanovsky (2233), Yan Miellier (2202), Miguel Fonseca (2176), and Dario Teodori (2146). They combined like the Mighty Morphing Power Rangers for a 4.5/5 score, only being held to a draw in the final round by 2nd place finishers Team Tesla. Mode Beast acquired individual scores on boards 1-4 of 1.5, 3.5, 4.5 and 4.5 respectively. Still, much credit given to big Vlad. Yanovsky absorbed some beatings on first board in order to serve the higher purpose and protect his relatively high rated lower boards. His teammates in return were free to go to work and handle their business and it paid off for the Dubya, aka the 'W' aka the win and not the 43rd Prez. Vlad's games were usually among the last to finish and if nothing else, his display of endurance was impressive. Tesla came close to an upset in the final round. On board four, Tesla’s Lester Machado was down to three seconds but agreed to a draw in a winning position. However, it was not meant to be and Mode Beast came through as king of the mountain. Teams Tesla and Pawn Lives Matter (please direct any mail in protest of the name to the team's fourth board William Bowman; sorry pal, better you than me) both scored 4/5 with Tesla edging out PLM on tiebreaks. Top first board went to FM Corey Acor from PLM who held off Zoe Brought her Coaches’ GM Alexander Goldin on tiebreaks, both with 4.5/5. Top board 2 went to 3 Goats and a Kid’s Truman Hoang with 4/5, and Mode Beast’s Miguel Fonseca took top 3rd board with an impressive 4.5/5. Another notable performance at board 3 went to Victor Barrios (1905) also on 4.5/5. Here is his first round game in which he scored an instant win when his opponent Yevgeny Postrekhin (2033) suddenly blundered a tactic. Finally, top board four prize went to Team John Cena’s Luis Calderon Jr. with a perfect 5/5 score. I had no idea the WWE superstar was such a big chess fan and evidently the general manager of his very own amateur team. I am familiar the members of Tesla from the South Florida chess scene, all very laid back fellas with a good sense of humor. We happened to be having lunch at the same place when they invited me to sit with them. Just as I was about to, they exclaimed 'WHOA' with a halting hand and asked if I had won my first round game. I informed them that I had not actually played yet and would not jump in until the second round. After considering my answer for a moment, Tesla teammates Lester and Derek Laureano gave me the go ahead to sit whilst explaining that they had relegated their unlucky teammate in round one to the loser table to eat alone! That is when I noticed him seated only two feet away shaking his head, clearly not thrilled with the joke. I did my best not to snort laugh Dr. Pepper out of my nose because that would burn and I because I was certain I would have have been sitting with him had I actually played. This year I played a key role in the under 1500 section when my own teammate and close personal friend, the nefarious Max Cufari, kicked me off the squad, renamed it Castle-Mate (more on that later) and replaced me in order to lower their average rating enough to enter the section. To report fairly, their version of the story is that I waited too long to commit, which may or may not be true but I find it to be irrelevant. As any good friend and former teammate would do, I immediately sought out to join an even lower rated team in order to plot and exact my revenge. As fortune would have it the loosely affiliated Florida Atlantic University Team, the Chess Owls, accepted me on as an alternate. I happen to work at FAU and am pseudo sponsor to their chess club and yes, our mascot is the majestic Burrowing Owl. A small ground dwelling common creature that evidently has a passion for chess. 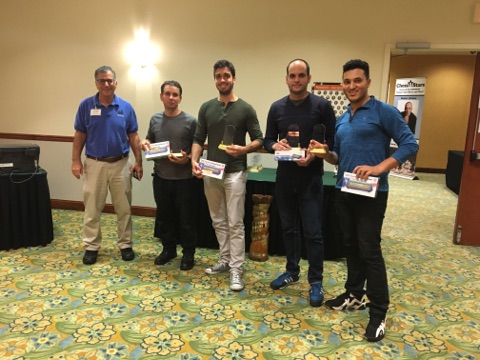 Castle-Mate on the other hand, gets their name from a chess variant developed by the rascal Max Cufari himself. I can best describe the game as hybrid of plunder chess, bughouse and any old RPG card game such as Magic the Gathering. Because I stop at chess nerd, I have never actually played an RPG and thus do not actually know if that last part is a fair comparison. Currently found only on Amazon, they are excited about having it available through USCF Sales soon (more info on Castle-Mate visit www.castle-mate.com). Rounding out the remaining members of Castle-Mate were: the ringer they brought in to replace me, Carlos Gimon on 2, my brother from another mother Sadik Bizanti M.D. on 3 and Max's severely underrated BFF Kevin Aguirre on 4. Unfortunately, this endearing tale of revenge does not have a happy-ending. After going undefeated in the first three rounds, the Chess Owls and Castle-Mate were on a collision course for the penultimate round. I crashed in the same hotel room as my own teammate Jhon Benitez who was kind enough to extend shelter to the enemy, namely Max and Kevin whose own room reservation had been mistakenly lost by their motel of choice. The next morning we woke to face-off in what would likely decide the overall winner. I quickly found myself in a better position and up a pawn on board one after Max attempted to deviate from his usual KID. My teammate Matt Kolcz on board two was looking good with his French and had the possibility of winning a piece for a couple pawns (albeit center pawns), our board 3 appeared equal but admittedly board four was becoming tough to defend on our side of the table. Overall a promising start. That is when stuff went sideways quicker than Usain Bolt strapped to a cheetah riding a rocket. I look over to see Jhon go down a pawn after a number of forced exchanges leading to a worse but possibly salvagable endgame. My teammate Nick Weisberger, previously undefeated on our board 3 and now playing Board 4 (in place of tournament first timer Matthew Mulhern who had a great event himself) was still in a crisis against his under-rated opponent of 891: Matt had declined the winning of the piece, instead going for a wild and hairy exchange and pawn sacrifice that did work, but in a slightly different move order. I praise Matt for even coming up with this crazy dynamic concept. Though it failed this time due to a move-order mixup in the execution, I doubt the vast majority of players would spot it let alone choose it over winning material. Just like that, we lost on board two and four and drew on three, locking in the win for Castle-Mate. My game was all about the not-so-friendly rivalry now. Unfortunately (for me), I had lost my edge and refused to accept a draw offer from Max as he was down to seconds but had an unavoidable perpetual check to keep my king from getting active. In an attempt to force the matter and flag my opponent I foolishly pushed pawns that had no right being pushed and ended up dead lost. That 5-second time delay that had allowed Max to hang on by a seemingly impossible thread now felt like an eternity as I went down in flames like a tissue in a pizza oven. Castle-Mate went on to draw in the last round securing the win with 4.5 while the Chess Owls ended up tied with the Kings and King Activation on 4 points for places 4,2, and 3 respectively according to tiebreaks. Max won top first board in the U1500. Normally I might add more details on specific games but this year the thing that really struck me more than anything was the connections crisscrossing our chess community of UFO believers. The people sharing in this beautiful thing that transcends everything else for these shared moments of brilliancies and blunders counted down on a digital clock. I always enjoy seeing the familiar faces and meeting new ones at any chess tournament but without a doubt never more so than at the USATS. On that note, I definitely need to give a shout out to my local Palm Beach boys Eric Cooke and Rob Lachaussee from team Chessopotamia and a special thanks to TD Jon Haskel for yet another successful event in the books. Find full final standings from the US Amateur Team South here. Up next on US Chess: reports on the East, North and West.
SHARE: