Given its digital access, the Blitz Championship was the biggest university chess event ever, producing nearly 1,000 participating students from 84 countries -- the large player pool arriving as a shock to Tornelo’s Swiss tournament system, which encountered several reports of disconnections and other result-impacting difficulties. As such, all games played on the event’s first scheduled day Saturday were annulled, and the tournament was restarted Sunday as a one-day 10-round Swiss event, amended from the originally scheduled two-day, 20-round Swiss. The time control was 3+2.

GM Mikhail Antipov from the University of Missouri finished with bronze in third place by scoring 4.5/7 in the Open Championship. Also appearing in the Championship Final was GM Grigoriy Oparin from Mizzou, and GM Hovhannes Gabuzyan and IM Irakli Beradze from the UT-RGV.

Up next for FIDE’s World University series is the Individual Rapid Championship, a two-day 12-round Swiss with a time control of 10+5 set for this weekend March 20-21. The player pool has been sorted by rating and split into six groups of similar strength, and the top player from each group will qualify for the final round robin to be played next Thursday, March 25 at 5:00 p.m eastern. 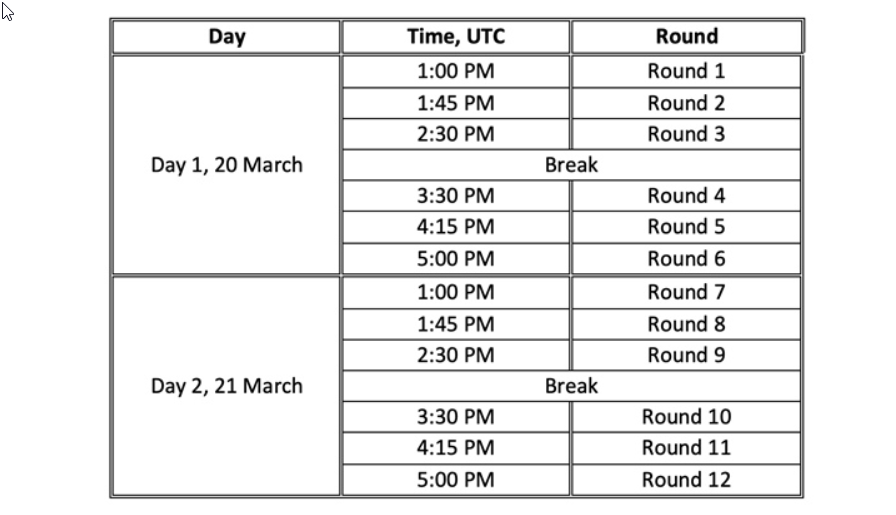 Later this month, FIDE will host World University Team Cup events for both Blitz and Rapid on March 27 and March 28, played on Chess24.com. The four best teams according to the Individual Blitz and Rapid Championships will qualify for the Team Cups, with the competitions planned as knockout duels of two matches each, with each match played on four boards. The playing schedule for each duel is pending and will be based on the time zones of the qualifying teams.

Click here for results and more information on FIDE’s World University Online Championships. This weekend's Rapid Championship games may be viewed on Tornelo.