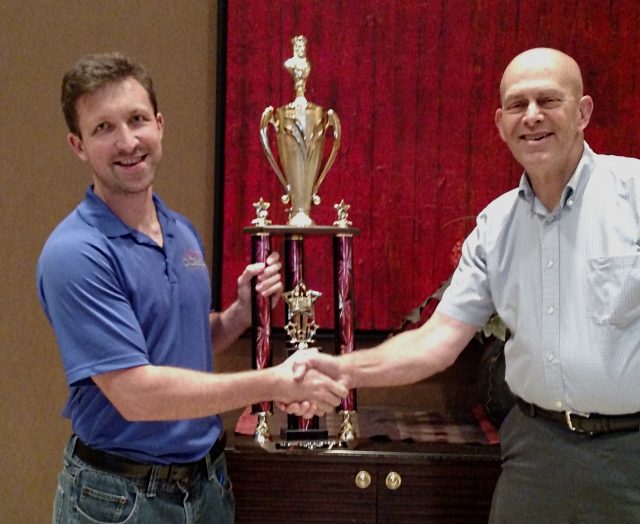 Molner (left) accepts the championship trophy from New Jersey Chess Federation President and new US Chess Board member Hal Sprechman (right), Photo Noreen Davisson
Morristown, NJ – September 6, 2017 – This past Labor Day Weekend, Grandmaster Mackenzie Molner won the New Jersey Open, the state’s annual chess championship.  Molner, 29, a resident of Montclair and graduate of Montclair High School, scored five wins and one draw in the Morristown tournament which featured a record 181 players, including six chess Grandmasters. “It was a difficult tournament.  There are so many good chess players in New Jersey,” Molner said.  “I started off poorly in the first game, nearly losing, but somehow managed to pull it out in the end.  I think that close call inspired me to really buckle down and focus for the remainder of the tournament.”  Molner previously won the state championship in 2008.  “This year was much more difficult than 2008.  Not only were there more grandmasters, but with all the strong players, anyone is capable of beating anyone else.” Molner mounted a menacing attack against GM Alex Stripunsky in round five. Can you find the only way for Stripunsky to defend in the following critical position? Show Solution
37...Qd6! defends the knight on f8 and counterattacks by threatening ...Rxd1. For instance, 38. Nf6 Rxd1 39. Rh3 and Black turns the tables after 39...Qd4+ 40. Kh1 Rxf1+ 41. Bxf1 e3+
Instead, Stripunsky played 37...Nd6, which was met by the devastating 38.Qh6+. Play through the full game below: New Jersey State Chess Federation president Hal Sprechman presented Molner with the championship trophy on Monday evening.  “I was really pleased to see Mac win the New Jersey Open,” Sprechman said.  “He’s been a fixture in New Jersey chess for years as both a player and a teacher, and devotes himself to being a role model for kids in the scholastic chess scene.” The New Jersey Open in an annual event sponsored by the New Jersey State Chess Federation, and this year’s competition was its 70th edition.  The New Jersey State Chess Federation is an organization dedicated to the advancement of chess in the state. For many years, the NJSCF has been holding chess tournaments and sponsoring chess clubs in order to give New Jersey players an outlet to play this ancient game.
SHARE: