When Lighting Strikes Once: Winning vs. Caruana 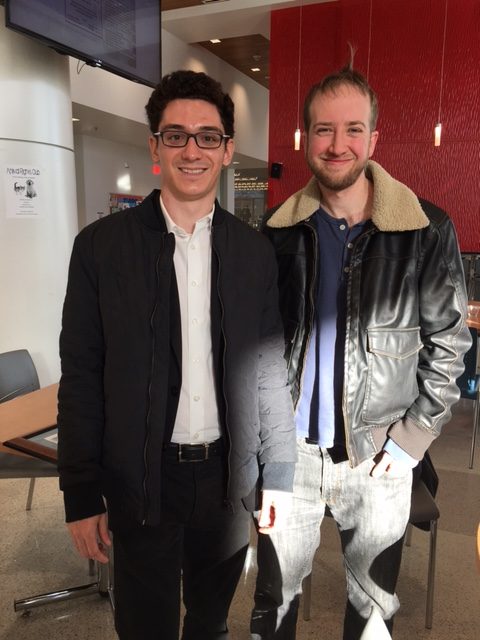 Fischer v. Spassky. Kasparov v. Karpov. Caruana v. Finn. Some great rivalries are known to everyone in the chess world. Caruana-Finn is not, of course, one of them. As a 2169 FIDE rated expert, I am not in the same realm as the elite players listed above. One great thing about the small world of chess though, is that even an amateur such as myself can still find himself managing a professional chess team or sitting across the board from the current #3 in the world, fighting and praying for an upset. On March 4th at Ocean County College, I found myself in both of these situations.  My team the Montclair Sopranos had just defeated the Philadelphia Inventors the Wednesday before in the first week of the PRO Chess League playoffs. The following Wednesday we would battle the Montreal Chessbrahs – led by Fabiano Caruana. But first I would play Fabiano in a 35-person simul hosted by OCC and the Tom’s River Chess Club. It can be a bit intimidating sitting across the board from such an elite player. As one friend put it before the game, “you’re basically playing the Lebron James of chess.”  It may not be a perfect analogy but it gets the point across. Promising my PRO Chess team that I would sniff out Fabiano’s weaknesses before our big match, I have to admit that even I thought there was a medium to large sized chance that I would lose. Did my 3:3 lifetime tournament score against Fabiano give me confidence? Yes, but it would have been more reassuring if Fabiano had been older than eight years at the time. Important questions weighed heavily: if Fabiano becomes world champion, how annoying would it be if I lose my 50% record against him first? At what point should I stop bragging about chess wins against an 8 year old beginning his career? There were no easy answers. For whatever reason I decided that my game against a 2800+ rated player was the right time to try out the Tarrasch Defense for the first time over the board. Needless to say, it didn’t go well. Down a pawn with no compensation, I remembered the lecture Fabiano gave right before the simul. Showing his masterful 3rd round victory over World Champion Magnus Carlsen at the 2014 Singquefield Cup, which Fabiano won by a stunning three points, Fabiano reminded us in the audience that chess players make mistakes – even the best chess players. On move 37 of our game, Fabiano made one such mistake himself. Luckily for my post-game sanity, I caught the mistake and had the pleasure of responding with a cute tactic. The game was immediately equalized, and I went on to win (despite missing an easier win on move 38) after Fabiano rejected a drawn continuation.  The shock still hasn’t worn off. With my win behind me, one question remained: was this a harbinger for things to come on Wednesday, or did I just incentivize the vengeance Fabiano promised as he was whisked away by the event organizer Steve Doyle? I knew that my team was counting on me for inside information, so I helped them prepare by suggesting that they misplay the Tarrasch and blunder a pawn.  Perhaps anticipating this obvious advice though, Fabiano shrewdly sidestepped such complications by playing 1. e4 in his game against GM Robert Hess, going on to win an aggressive attack in the Najdorf, and fending off a near miss against GM Pascal Charbonneau as black. 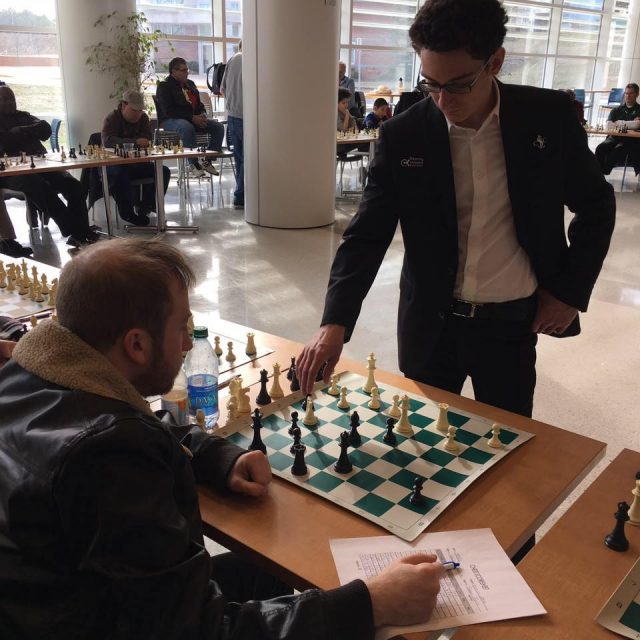 Those two wins were enough for the Chessbrahs to knock us out of the playoffs.  Although it was of course disappointing to lose, it was an exciting finish and we will definitely be back for the next PRO Chess League season. For the moment I am grateful to compete in a game where even someone like me can play and occasionally beat Lebron James. Follow the remaining PRO Chess League battles on Wednesday March 15 and the weekend of March 25-26 on https://www.chess.com/tv
SHARE: