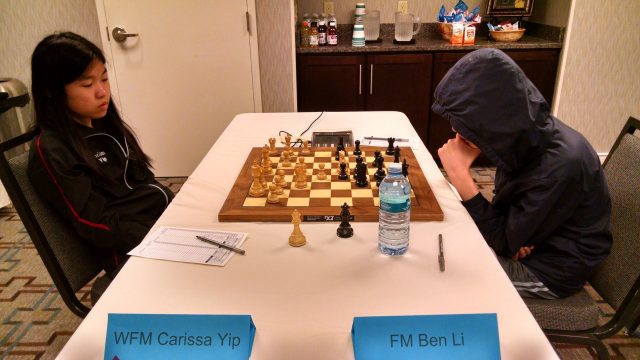 Co-champs Yip and Li face off in the Cadet Championships. Their game was a draw. Photo Nina Patel
Ben Li (MI), 15, and Carissa Yip (MA), 13, tied for first at the US Cadet Championship, held in Manchester, New Hampshire (Aug 17-21) and are recognized as co-champions. This makes Yip the first girl in history to win a US Chess Cadet Championships, a tournament that dates back to 1986. The invitational event, open to players Under the age of 16 was directed by US Chess organizer of the Year and IA Alex Relyea. The festivities kicked off with a blitz tournament that also served as tiebreaker. FM Trung Nguyen won the blitz, while Li placed 4th, and Yip 6th. Li wins a four-year scholarship to UMBC on tiebreak. 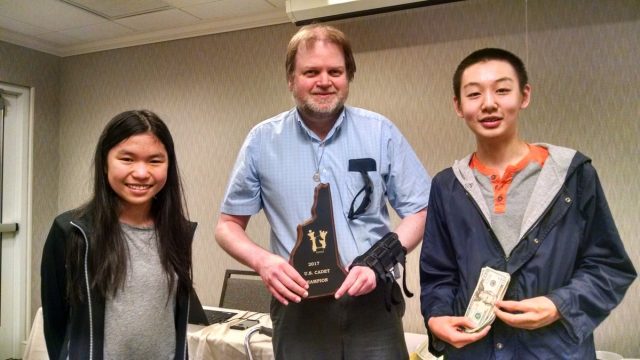 Yip and Li with tournament organizer Alex Relyea, Photo Nina Patel
Ben Li said that the tournament was well organized and had a welcoming atmosphere.  His most memorable game was against Albert Lu, which "I fought back from losing to win a position of three passed/doubled pawns vs. a rook."
Li has one IM norm and intends to keep working on the title.
In the round two head to head between Yip and Li, Li found a cute swindle in a lost position to change the course of the tournament:
Position after 53. Kg1?
[fen]8/8/5pR1/4pP1k/1P2P1p1/P5B1/1r6/6K1 b - - 0 53[/fen]
Black to Move
Show Solution 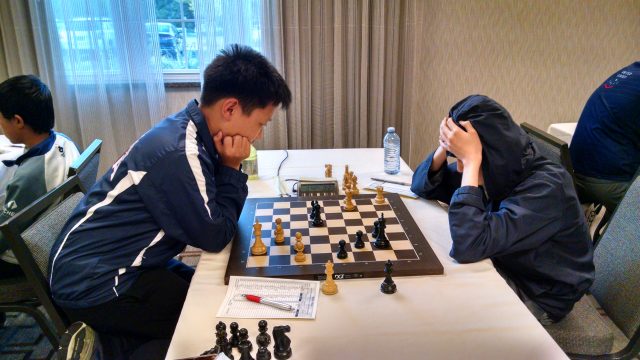 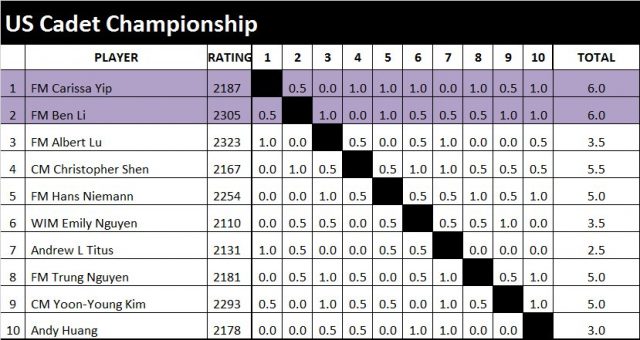 Yip said the best thing about the Cadet was facing a strong player nine rounds in a row. Yip annotated the following victory over her friend Emily Nguyen, which she called her favorite of the event: 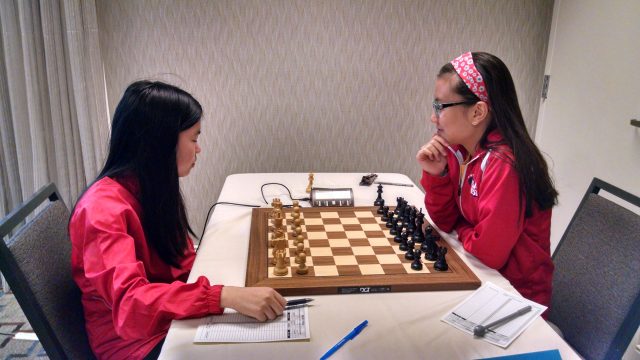 Carissa Yip and Emily Nguyen, Photo Nina Patel
Yip gave a shout out to Edward Song (co-champ at the Denker), for helping her with prep and to IM Craig Hilby, for being her most genuine male friend. Carissa said she had a great time with her friends at the Cadet, from Clash Royale to pizza. And of course, bughouse. https://twitter.com/relyeachess/status/899802036597911554
Find more information on the Cadet on the official website, where you can download a pgn file with all the games.
SHARE: