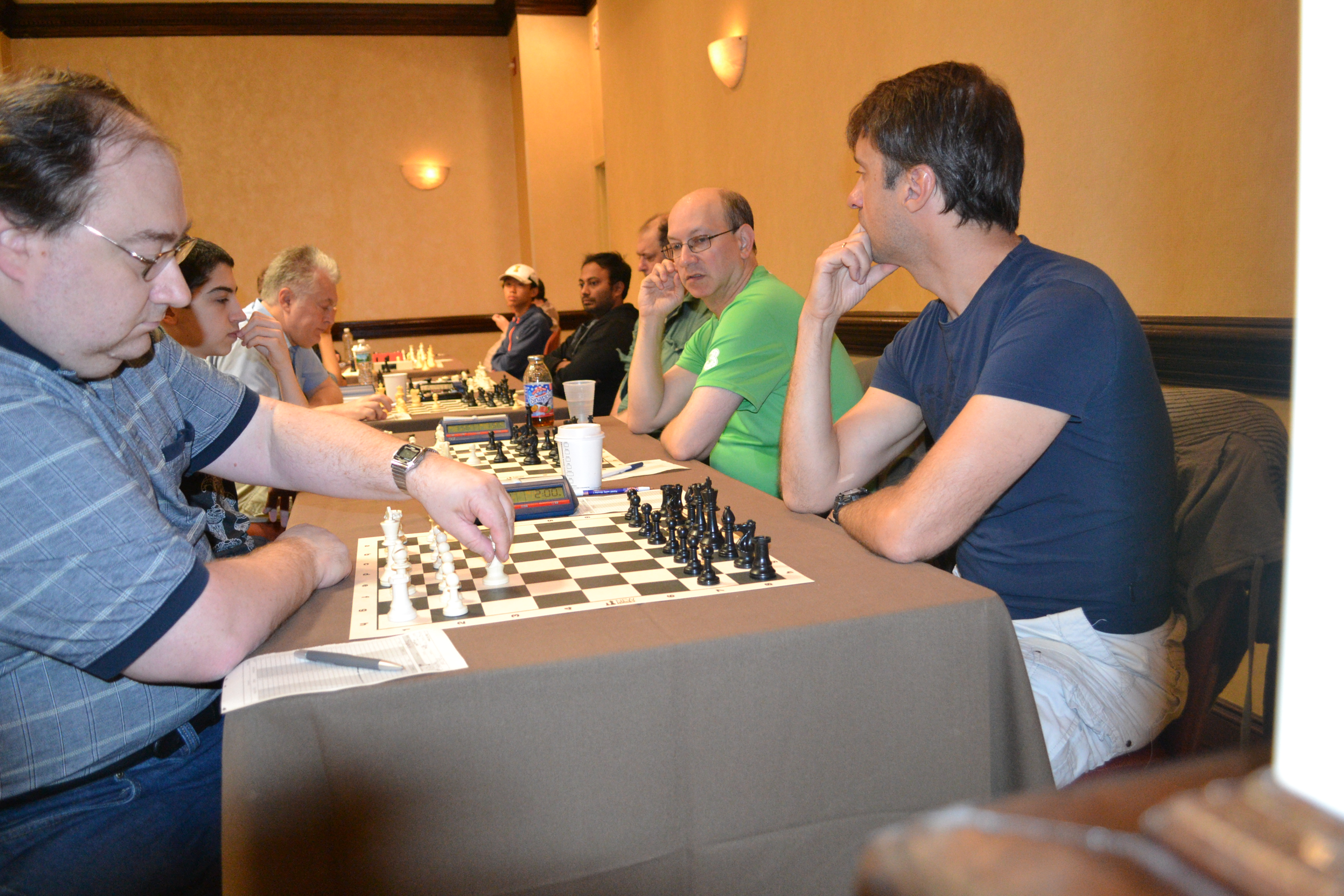 Winning a chess tournament in the Garden State is no picnic, even for a grandmaster. GM Stripunsky brought a big enough basket of good moves to take the title but had to share the cash with GMs Joel Benjamin, Alex Fishbein and Sergey Kudrin. All scored 5-1, drawing two games. GMs Fishbein and Benjamin kindly annotated a victory each for US Chess. GM Alex Fishbein always plays interesting chess. In a key game in Round 4, he demonstrates the sparkle that attracts spectators.

GM Joel Benjamin has an eye-opening new book “Liquidation on the Chess Board.” In his game against Brandon Jacobson, he shows off the idea. IM Yaacov Norowitz, GM Mackenzie Molner, NM Runya Xu, and Expert Sandi Hutama tied for 5th-8th. Hutama earned Top Expert. Thoshan Omprakash won the Class A prize with 3½. The 79-player open section was a tough crowd. Katherene Qi, pre-ranked seventh and 150 rating points under number-one Serge Adelson, took clear first in the 60-player Under-2000 section with 5½ points, drawing Adelson in the final round. Adelson, Taran Idnani, Jason Lu, and George Chachkes tied for 2nd-5th, a full point behind Qi. Chachkes won Best Class B. Lisa Jin took Best Class C with 3½ Alexander Vekker, entering with a rating of 1457, topped 30 players in the Under-1600 section with 5½-½. Pranav Shah was second. Theodore Covey, Alexander Hu, and John Gonzalez tied for 3rd-5th with 4½ . Jaron Bernard won Class D with 4 points. Sudyut Sinha took Class E with 2½. Ellexis Cook scored 2 points to win the Class F prize. On Saturday 78 juniors competed in a scholastic event in separate rooms at the Hyatt. Charles Lin won the Under-1200 section. Dhriti Iyer won the Under-900 prize, and Sofia Macaspac won the Under-600 section. Any of the participants could then enter the two-day schedule of the main event. New Jersey stalwart Aaron Kiedes directed the junior event, with help from Jim Mullanaphy. The New Jersey Open, a three-day event held annually on the Labor Day weekend, checks all the boxes in my personal five-category tournament ranking system. 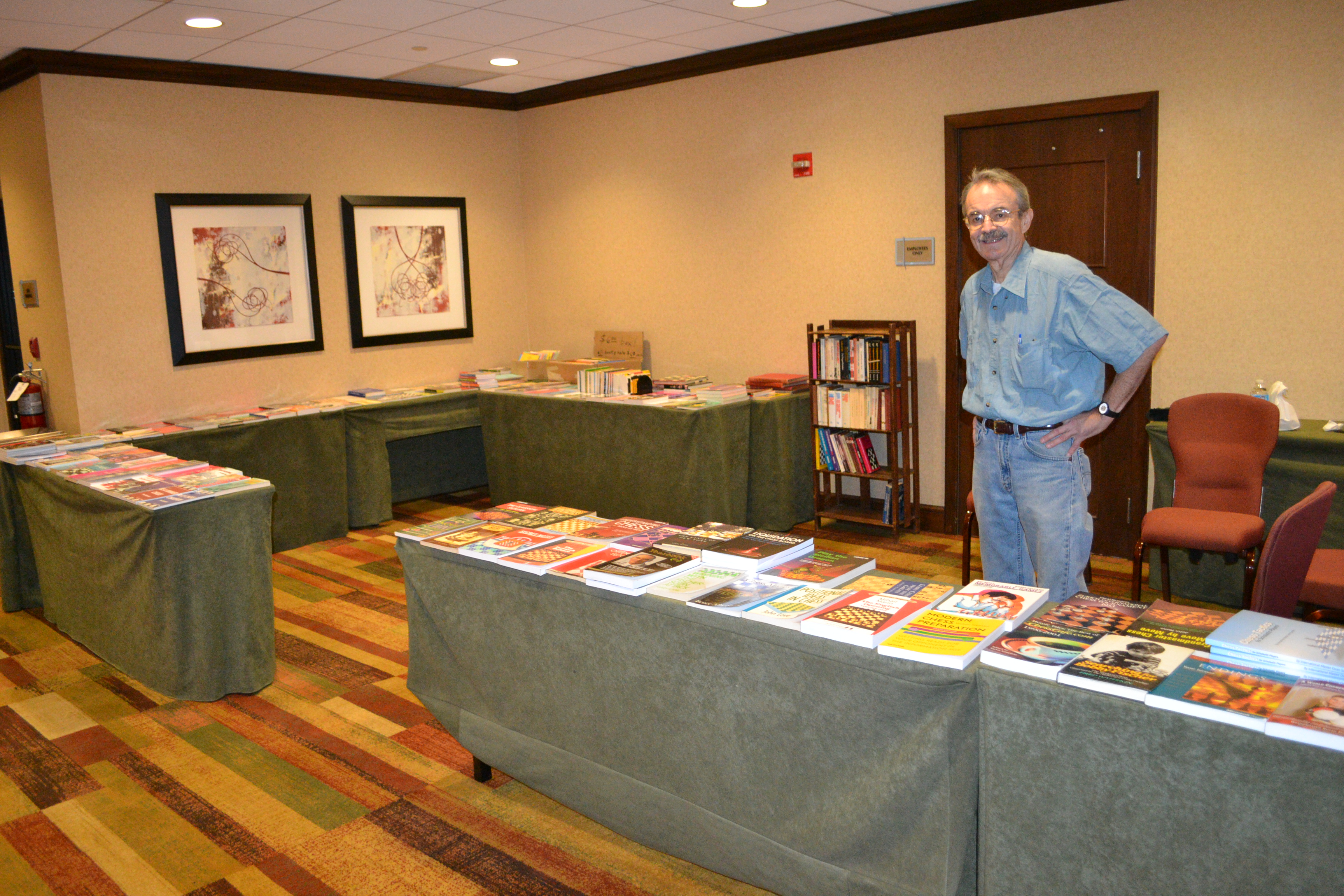 Fred Wilson and his book store

The playing site is close to other diversions. This one is getting to be a hard box to fill for otherwise excellent events. But the New Jersey Open aces this category. The Hyatt is in the heart of historic Morristown. In minutes, you can walk to dozens of shops and restaurants, one of George Washington’s important Revolutionary War headquarters, even a farmers’ market and a beautiful town-square park. 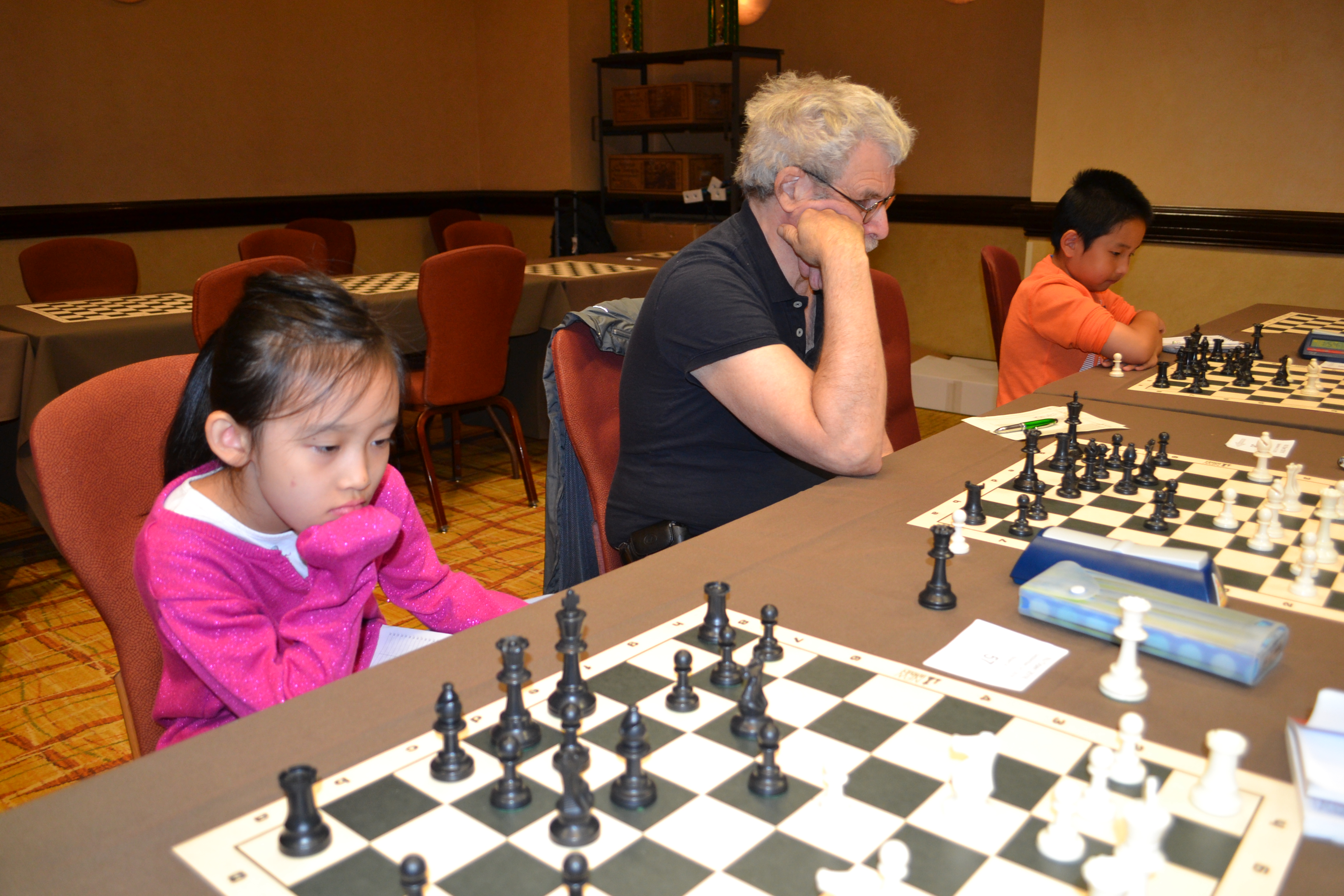 Chess for all ages!

Just don’t think winning is a walk in the park. Tennessee Open 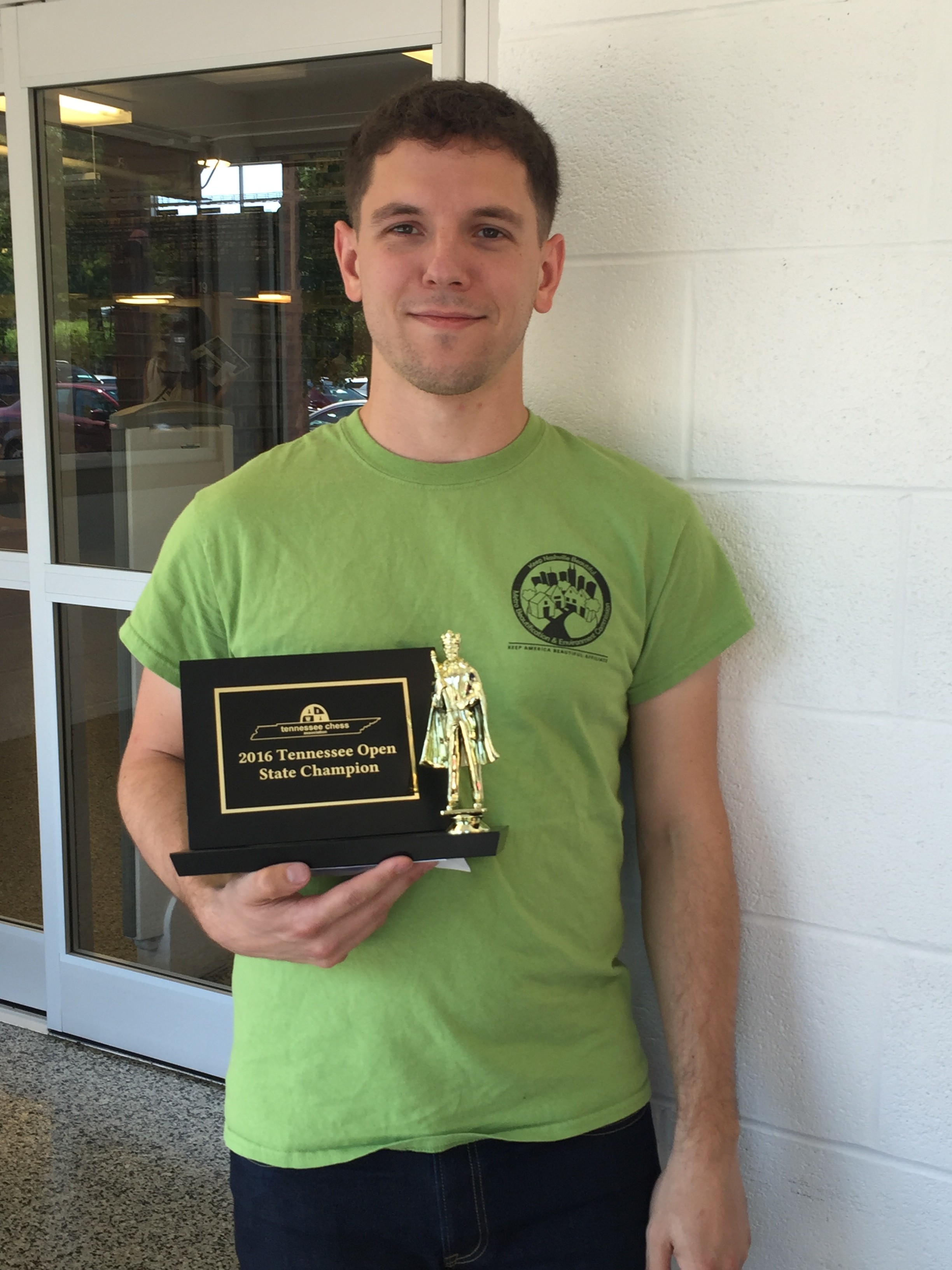 The Tennessee Open was won by Alex King, who is originally from Nashville. He now lives in Memphis and works for a new statewide chess in schools program based at the University of Mississippi. Alex annotates his favorite victory from the tournament. 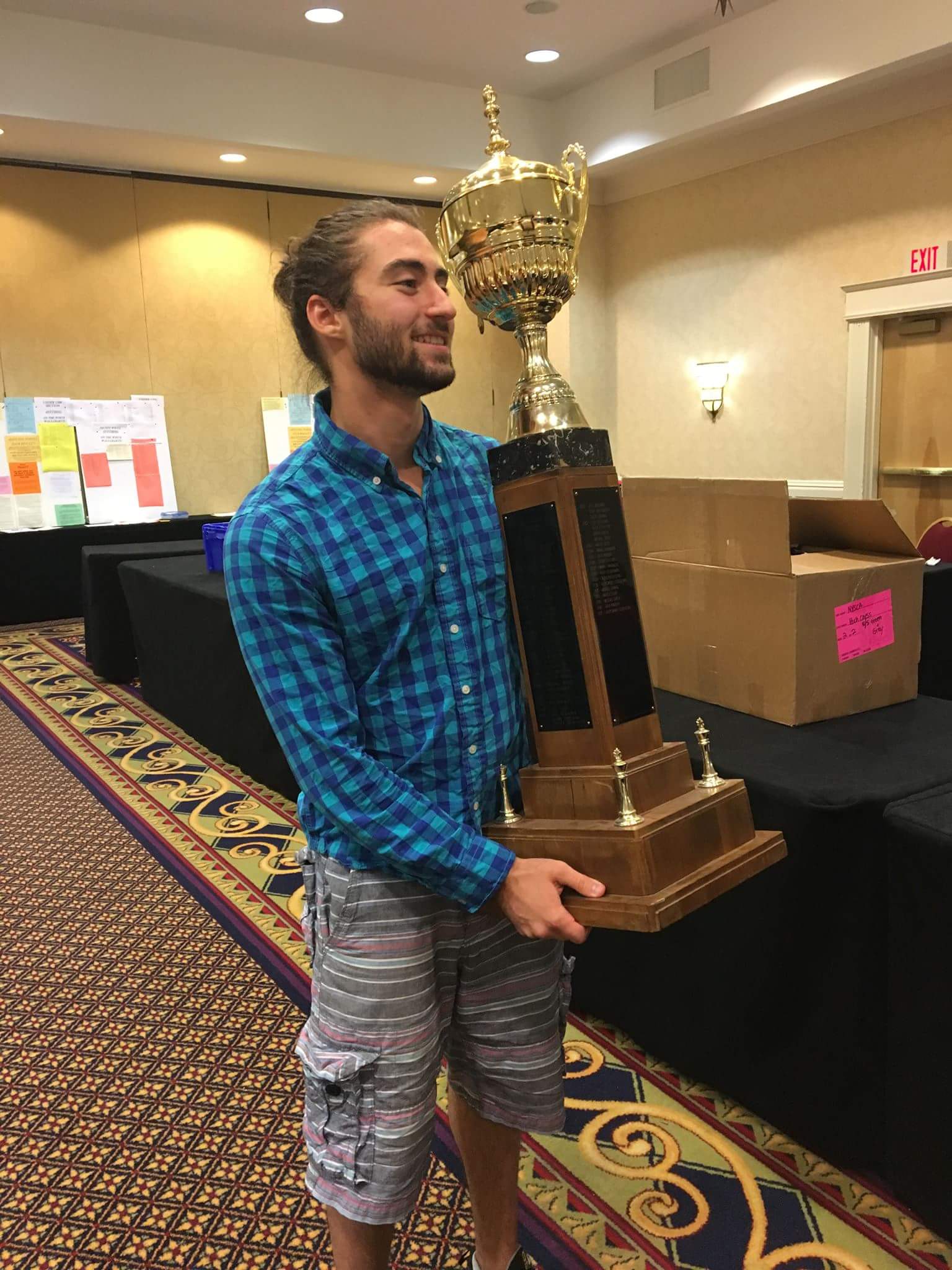 Brodsky defeated Zeltsan and Paciorkowski defeated Tannenbaum.  Dean-Kawamura was paired “down” to GM Rohde and drew.  This setup a 4 way tie going to the last round with Ostrovskiy, Brodsky, Paciorkowski and Renna all at 4-1.  In the last round Ostrovskiy defeated Paciorkowski and Brodsky defeated Renna to finish in a tie for first. Ostrovskiy’s mixed doubles team finished 1 ½ point ahead of all other teams as Ostrovskiy’s partner Charlie Reeder won the Under 1800 section with a score of 5 ½ - ½.   This is the first time the State Champion also won first mixed doubles. IM Jay Bonin finished in clear third place with 4 ½ - 1 ½.  Bonin defeated GM Michael Rohde in the last round. Bonin got off to a rough start.  He was scheduled to play in the three day schedule, but ran into a traffic jam and had to take a half point bye in round one.  He was paired significantly down in round two and won and then drew with Paciorkowski and Dean-Kawamura in rounds 3 and 4.  He won his two games on Monday to finish third. One player who did not win money but had a great tournament is FM Ben Dean-Kawamura.  He defeated Ostrovskiy and drew with Bonin and Rohde.  Only a last round loss to FM Olivier Chiku-Ratte  kept him from cashing. This tournament has a 4 day, 3 day, and 2 day schedule (except no two day schedule for the Open).  By far the most popular schedule is the three day option.  Not a single master opted for the 4 day schedule! On Sunday night there was  a blitz tournament which GM Max Dlugy won scoring 9 ½ - ½ giving up only a draw to GM Michael Rohde and going 2-0 against everyone else including Ostrovskiy and WIM Megan Lee.  Since Dlugy is now from New Jersey, Yefrim Treger is the New York State Blitz Champion.  He tied for 2nd place with WIM Megan Lee from Washington. The Under 2100 section had a familiar face atop the standings – Harold Scott started 4-0 and then drew both games Monday to tie for first with Webster Kehoe.  Scott and Kehoe drew their final round game.  I have to apologize to Mr. Kehoe.  It is my fault he didn’t come in clear first.  After a couple mediocre performances in “Under” sections, Harold Scott recently told me if he ever tried to enter an Under section again I was to stop him.  Unfortunately, I was not in Albany to direct or play so I was not able to stop Harold from winning the tournament! Harold and Tony Renna were roommates at this tournament and both started 4-0. This tactic occurred in the Under 2100 section.  Can you find white’s move? Craig, Peter A-Geiger, Alan E [fen]rn2k2r/1bq1nppp/p2pp3/1p6/3NP3/2N2B2/PPP2PPP/R2Q1RK1 w kq - 0 11[/fen] Show Solution
Solution 11. Ndxb5 axb5 12. Nxb5 Qb6 13. Nxd6+ Kf8   14. Nxb7

Here is a miniature from the Under 2100 section featuring a king hunt and mate in the middle of the board. 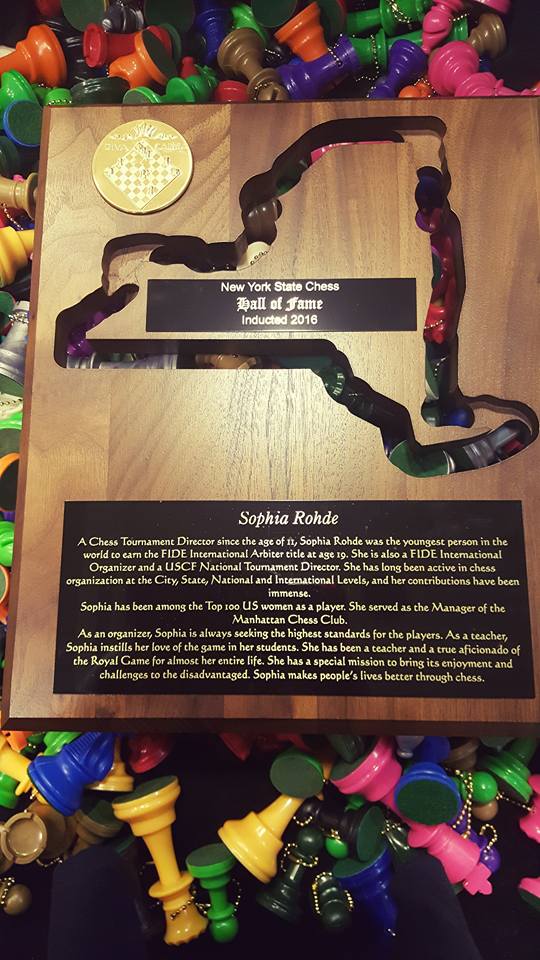 The New York Chess Association holds its annual meeting at this event.  As part of the meetings, they induct players or organizers into the New York Chess Hall of Fame.  This year the players were GMs Robert J. Fischer, Sammy Reshevsky, Reuben Fine, Gata Kamsky and Carrie Goldstein.  The organizer this year was Sophia Rohde.  A few highlights of Sophia’s accomplishments are from the induction ceremony are: A Chess Tournament Director since the age of 11, Sophia Rohde was the youngest person in the world to earn the FIDE International Arbiter title at age 19.  She is also a FIDE International Organizer and a USCF National Tournament Director.  She has long been active in chess organization at the City, State, National and International levels, and her contributions have been immense. Sophia has been among the Top 100 US women as a player.  She served as the Manager of the Manhattan Chess Club.  As an organizer, Sophia is always seeking the highest standards for the players.  As a teacher, Sophia instills her love of the game in her students. She has been a teacher and true aficionado of the Royal Game for almost her entire life.  She has a special mission to bring its enjoyment and challenges to the disadvantaged.  Sophia makes people's lives better through Chess. Congratulations to all on a well deserved honor. NTD Steve Immitt directed for Continental Chess Association assisted by Bill Goichberg, Brother John McManus & William Townsend.  William Townsend also edits many of the games from the tournament for this article and for Empire Chess. Full tournament details including some games can be found at www.nychampionship.com. Previous Continental Chess tournaments can be found at the Continental Chess website at  http://www.chesstour.com/cross.html. Record-Breaking Attendance at the Southern California Open

The Southern California Open, one of the strongest open tournaments in California, took place in the ever-sunny city of San Diego for the 6th year in a row. Wandering across the tournament location, the extensive grounds of the Town and Country Resort, you pass the convention center hosting a wide range of events, including the TICA Cat Show, which boasts “America’s finest felines”, and Hidden Valley Feis, a huge Irish dance competition, on the way to the ballroom where a record-breaking 208 players, including some of the top players in the state, battle it out for the coveted title of “Southern California Open Champion." 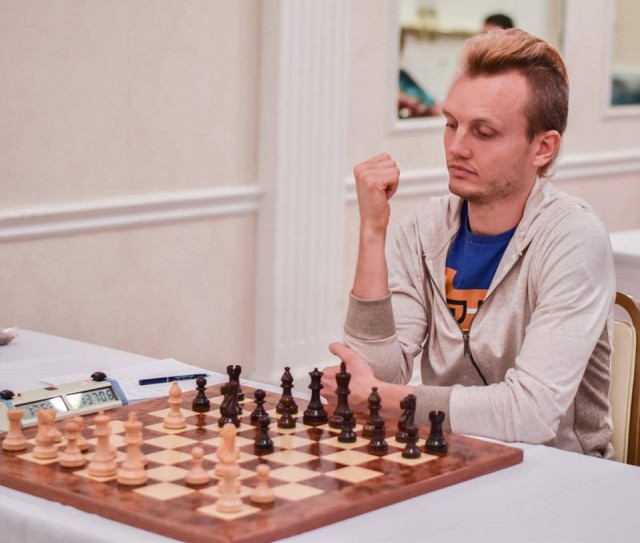 This year’s top seed, GM Timur Gareyev, shared first place with IM John Bryant. While both ended undefeated with 5 points out of 6, each achieved the score in different ways. Gareyev competed in the 2-Day Schedule and emerged from the three 50-minute games with a perfect 3-0, including victories over two former Southern California Open Champions, IM Dionisio Aldama and IM Andranik Matikozyan. The final two rounds, he accepted draws against two of his closest competitors, Bryant and IM Keaton Kiewra. Bryant, on the other hand, played the 3-Day Schedule with the longer time control throughout and was a half point behind Gareyev going into the final round, when he won a critical game to tie for first. 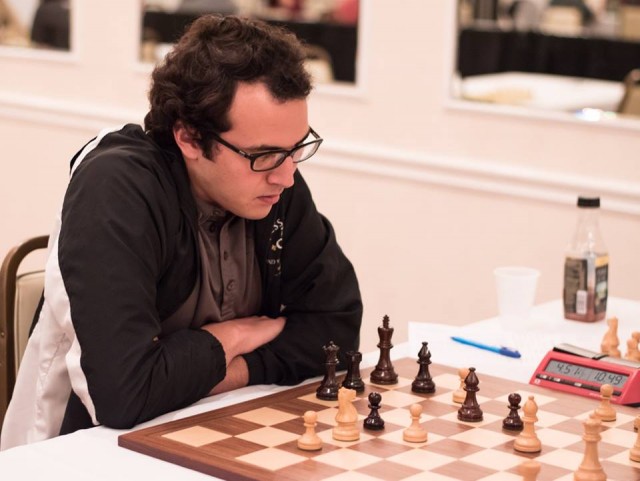 In addition to the Open, there were five competitive class sections. Here are the winners for each:

The Southern California Open is one of the few opens that offers three “Best Game Prizes”, including one reserved for a class section. Last year, the 1st place Best Game Prize went to FM Michael Casella for his hard-fought victory against IM Dionisio Aldama.

Stay tuned for the announcement of this year’s Best Game Prize winners in a few days! 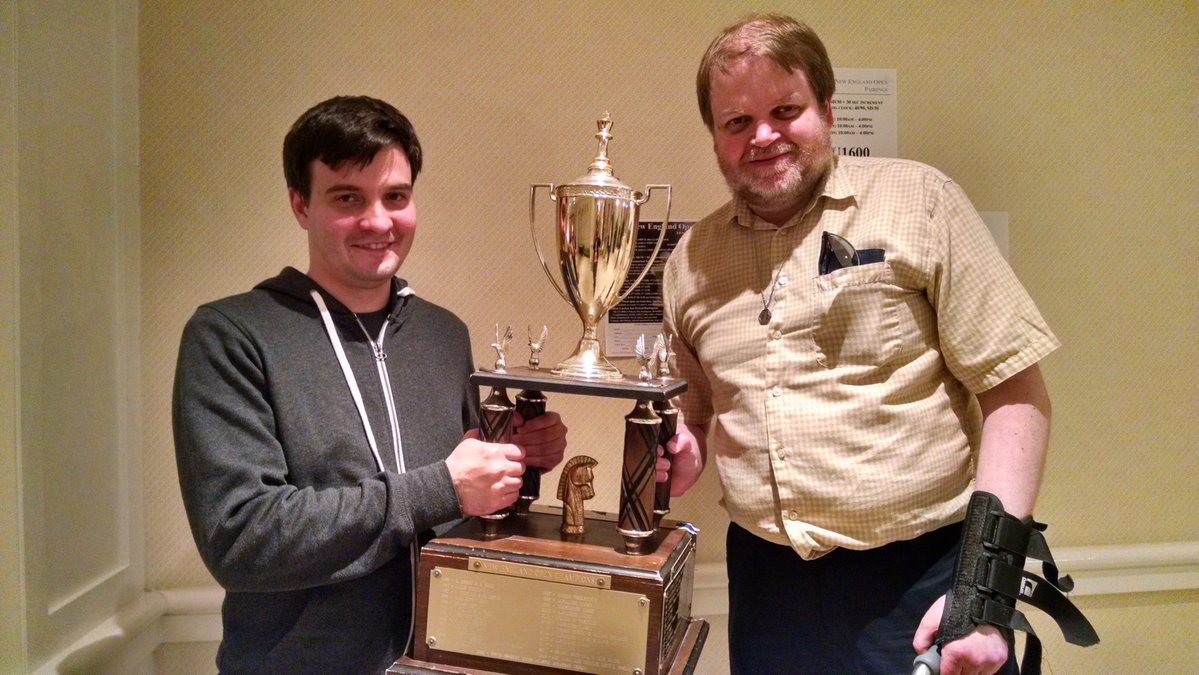 Denys Shelmov and Alex Relyea, US Chess Organizer of the Year

On Sunday of Labor Day weekend IM Denys Shmelov faced his two top competitors with Black and emerged with a 1 1/2 result en route to becoming the first player since 2011 to be declared sole New England Champion.  114 players came to Burlington, Massachusetts for the 76th New England Open.  GM Alexander Ivanov was declared Blitz Champion with 7/8.

GM Julio Becerra won his eighth (!) Florida State title at the Arnold Denker FL State Championship in Tampa, Florida. Congrats to Becerra, who won every Florida Championship he played in so far, and this time took clear first by a full point. (MSA crosstable). Have a Labor Day memory to share? Please share with us on facebook and twitter. And don’t forget to solve GM Pal Benko’s “Back to School” puzzles.