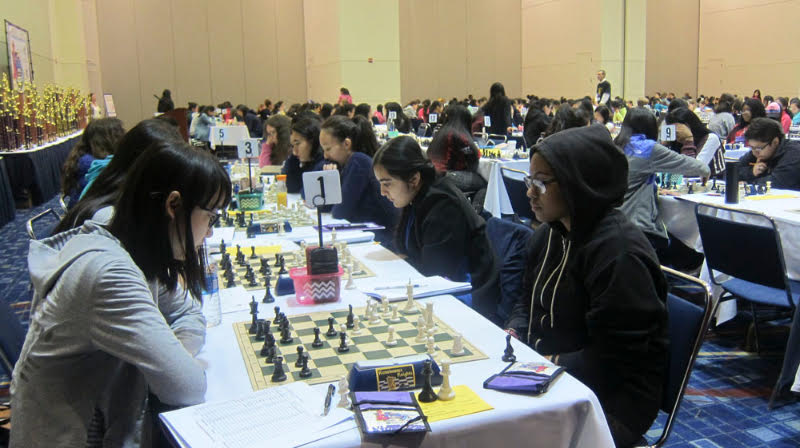 Photo Betsy Dynako
With great enthusiasm and record high attendance, the Kasparov Chess Foundation All-Girls National Championships are underway in Chicago.  For the second year in a row, the tournament is being held at the historical McCormick Place, a prominent conference center just minutes away from downtown Chicago, and its spaciousness is particularly appreciated this year as participation in the event may have increased by as many as 100 competitors.  Despite this increase in number of participants, Renaissance Knights, the organizer of the event, has ensured that playing conditions are as comfortable as those of previous years. 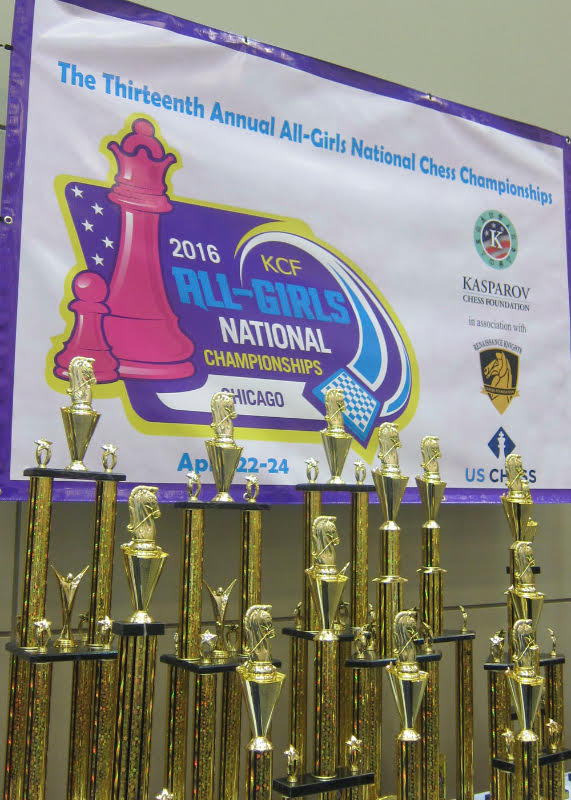 Photo Betsy Dynako
The variety of players represented on the boards remains diverse, with new players showing up from every corner of the US, including states as far away as Washington, and the number of local players in attendance has increased.  All in all, the competition will be fierce as many expert players are competing for the top trophies.  There were few surprises in the first round, with the majority of higher rated players winning against their lower rated counterparts. However, one of the upsets came from two-time former champion Anupama Rajendra, whose game, the final one to conclude, ended in a draw.  Evelyn Chen of Georgia must be very pleased, as Anupama has almost 500 points more than she does at present!  To further complicate things for Anupama and other favorite players in the top section, Nastassja Matus has joined the U-18 section, even though she’d be eligible to play in the U-12 section.  Much like Anupama in her first appearance at the tournament, Mastassja will have a chance to win the event being much younger than her peers in the section.  Of course, this will be not an easy task, as other competitors, like returning player Rachael Eng of Arizona, are also competing with comparable expert ratings. The tournament will be a fast paced six round event with three rounds on Saturday and two more on Sunday.  The time control for the event is 90 minutes with a 5 second delay.  Although the main action began today, there were a couple of side events to get things started.  A four round bughouse tournament began the activities with 14 teams competing for top honors.  The highest rated team, The Brooklyn-Manhattan Queens, ended up having to share top prize with Cascadia, as they drew their last match.  In the end, their tie breaker score will still keep them ahead.  Also, after a long round one, an outstanding 66 girls decided to join the blitz tournament.  Though not the highest rated player in the event, Sasha Konovalenko displayed her rapid thinking by winning with a perfect 10 score through the five round blitz tournament. The event is shaping up to be another great success. Follow pairings and standings here: http://rknights.org/registration/tournaments/all-girls-nationals/standings/
SHARE: