Opponents with disabilities need special care, so there are special rules to make it fair. 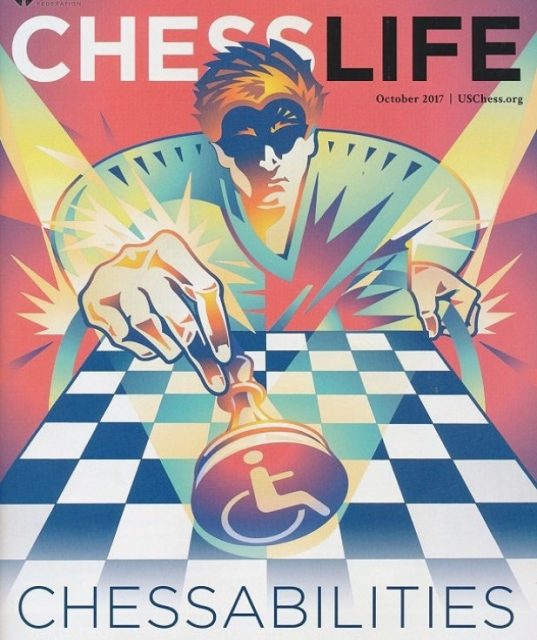 The cover of Chess Life Magazine, October 2017 issue, which featured coverage of the first FIDE World Junior Chess Championship for the Disabled.
Q: Why are some visually impaired, blind, and wheelchair assisted players’ assigned boards far away from their score group? A: The short answer is—accessibility. A player using a wheelchair often finds a board assignment on the end of a table next to a wide aisle very accessible. Blind players often have a second special board, or other equipment, that requires more space than a standard setup. That needed extra space is often found near the last board set up in the playing hall. Many TDs assign special needs players to the same accessible board for each round. So, if you are expecting to play on a board in your score group, but your opponent is a player with disabilities, you may be assigned to another board with better access for your opponent. If you are a visually impaired, blind, or a player with disabilities, informing the TD or organizer about what accommodations you need---well before the pairings for round one are made---is a win-win for everyone.   Q: My blind opponent has an assistant. What are these assistants allowed to do? A: Assistants are allowed to press the clock, keep notation, announce moves, give clock information, give scoresheet information, help in adjournments, pause the clock and summon the TD (effective 1-1-19), claim a win on time (effective 1-1-19), and report a “touched” piece by the opponent (effective 1-1-19). And as a practical matter, many TDs allow an assistant to make moves for the player with disabilities on the non-disabled player’s board. If your opponent has an assistant, then you are also allowed an assistant. Be aware that the TD staff is not required to find an assistant for you; however, in most cases they will try. When the late NTD Ira Lee Riddle was paired against a player with disabilities, he often also offered to perform all of the duties of an assistant for his opponent.   Q: How do visually impaired or blind players know what moves their opponents made? A: Blind players and their opponents must announce the move that is made and have it repeated back to them by their adversary. This helps ensure that both chess warriors are analyzing the same position.   Q: What are the differences between a standard chess board plus pieces and boards and pieces designed for visually impaired or blind players? A: Chess boards for blind players are designed to let their “fingers do the perceiving.” The boards have raised and lowered squares in place of light and dark squares. Each square also has a small hole in the center of the square to accommodate the peg on the bottom of the 32 chess pieces. Each piece is typically Staunton in design and is secured in a square using this hole-peg system. Usually, the black pieces have a slight knob/peg on their tops to distinguish them from the white pieces. Typically, a game using a special board also employs a standard chess set and board for use.   Q: What does the rulebook say about the definition of a “touched” piece on a special blind chess board? A: Pieces on a special blind board are considered “touched” when the peg on the bottom of a piece fully leaves the hole in the center of a square. Outside of that touch restriction blind players can use their fingers to otherwise physically sense (handle) their special board and pieces all that they want.   Q: Do visually impaired or blind players use any special chess clocks? A: Many blind players in this country typically still use an analog clock with the “crystal” (glass) face removed. That-a-way they can touch the clock face to get the same information sighted players receive via their eyes. There are special digital delay/increment blind clocks available. They appear to be expensive. Features beyond the typical routine digital clock functions seem to include two earphone jacks and separate player adjustments for sound. Don’t be surprised if a TD rules that a special needs wood pusher’s clock trumps your digital timer. Without an assistant, a visually impaired player would not otherwise have any way to get information from those standard fancy delay and increment clocks.   Q: From a US Chess rules perspective is there a difference between legally blind and totally blind? A: No. All that is required is some paperwork from an MD that is then used to issue a government “legally blind” certificate. Some legally blind players can see well enough to use a standard set and board—plus, they may not need any special equipment or an assistant.   Q: How do visually impaired and blind players take notation? A: Several methods of keeping score are available: (1) a general use manual braille recording device can double as a scoresheet; (2) a braille typewriter also works well; (3) a voice recording device is handy—since each move needs to be announced and repeated anyhow; (4) an assistant keeps score on a standard scoresheet; and (5) a larger print scoresheet can be used. That last option works well for many legally, but not totally, blind players.

If you are playing a person with disabilities, ask the TD to explain any unique rules that apply to that game.

Tim Just is a National Tournament Director, FIDE National Arbiter, and editor of the 5th, 6th, and 7th editions of the US Chess Rulebook. He is also the author of My Opponent is Eating a Doughnut & Just Law, which are both available from US Chess Sales and Amazon/Kindle. Additionally, Tim recently revised The Guide To Scholastic Chess, a guide created to help teachers and scholastic organizers who wish to begin, improve, or strengthen their school chess program. Tim is also a member of the US Chess Rules Committee. His new column, exclusive to US Chess, “Just the Rules” will help clarify potentially confusing regulations.
SHARE: