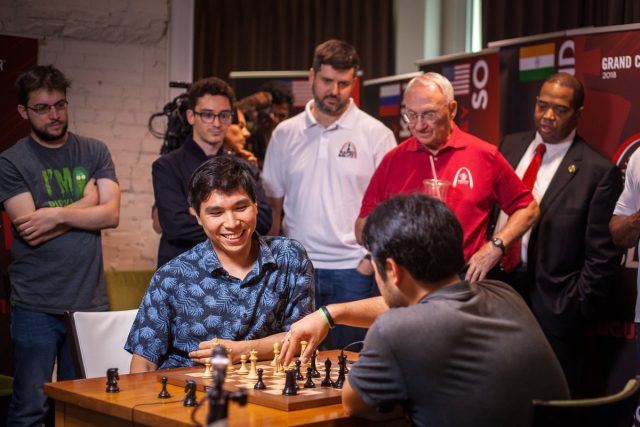 Be sure to say "check" in Ultimate Moves, Photo IM Eric Rosen
You don’t need to say check in the game, but say it all the same. You grab your bishop and slide it along the long diagonal to silently put your rival in check. Your opponent grabs their queen and snatches up the free pawn your bishop left unguarded and immediately starts your clock. You quickly press your timer button to restart his clock—pointing out that their king is still in check. Since you did not say “check,” your rival insists they can make any move they want. The TD rules your opponent must now use their queen—the touched piece—to get out of check, if possible. Just say “check” when you put your opponent’s king at risk, who can resist? The rules don’t require saying “check,” but saying “check” avoids a lot of messy situations. The rule in blitz (speed) chess is that you lose the game when you make an illegal move if your opponent points out the infraction. There are no second chances in Blitz to take back the illegal move (in this case, not getting out of check) and replace it with a legal one. Wrong results need tweaking ASAP so the right info’s there for all to see. OK, you’ve won your game. You report the results. Between that moment and the moment the next round gets paired, the information gets mixed up and your win turns into a draw (or worse). The longer you wait to report any misinformation about your total tournament score, or individual game scores, the harder it is for the TD to sensibly correct it. Your total score for the event is often printed on the paring sheet—check yours. Exchanging your current tournament score info with your rival before the game starts is also an easy way to check if your records match the TD’s for pairing purposes. If you notice your score is incorrect, tell a TD immediately. They may be able to perform some pairing magic to get you paired more correctly. If you notice any scoring glitches on the wall chart or pairings, then also inform the TD right away. Some TDs, if informed too late—like many rounds later— may count your correct score only for rating purposes but not for prizes. Why? Your incorrect score impacted the parings you got instead of the pairings you should have had—and that is important if it continues over many rounds. You can stay looking your best: Don’t talk to others during your contest. As your game progresses it wanders into familiar opening territory. When it is their turn, your opponent appears to be on their own in this opening and they often settle in for a long “think time.” So, you wander into the hall and socialize, make travel plans, schedule meals, etc. Those innocent conversations may be seen as inappropriate by your struggling opponent. Your opponent or the TD may get the wrong idea, no matter how innocent your communication turns out to be. Most casual conversations away from your game are just that, casual conversations between you and others; however, when your opponent claims otherwise, some very uncomfortable moments are going to follow. Avoiding conflict is easier than dealing with conflict. Keep to yourself during your game. And remember that cell phones and chess are not friends. While it is hard to stop, don’t keep going out in the hallway and talking on your cell phone or texting. When leaving the event for another quest, signing the withdraw list is the best. Having just finished game four in a five round event you decide to pack it in. Your results thus far don’t meet your expectations. The tournament has ceased to be enjoyable for you. It is time to move on and skip round five. Please officially withdraw from the tournament properly. Don’t just take off. From time to time, you will need to stop playing in a tournament to attend to other thing in your life. You can do this by withdrawing from the event; please withdraw properly. By withdrawing properly, you will make sure that another player in the tournament will not be paired against you in the future when, in fact, you will not be showing up for the game. They came to play too. Most tournaments have a withdrawal sheet for players to sign. At the very least, tell the TD you can’t play the rest of the tournament. Some players note on the paring sheet, when they report their game result, the fact that they are withdrawing. A wood pusher typically essayed games on day one of most two day events. He chronically did not show up for day two of the tournament. He also chronically did not withdraw from the tournament. Finally after many tries the organizers came up with a solution that motivated him to withdraw properly. When he entered an event he was assessed a huge refundable fee—in addition to his entry fee—that was returned to him ONLY if he withdrew properly; i.e., he had to  sign out on the withdrawal list or contact the TD before the pairings were made for the round(s) he was going to miss. Tim Just is a National Tournament Director, FIDE National Arbiter, and editor of the 5th & 6th edition of the US Chess Rulebook. He is also the author of My Opponent is Eating a Doughnut & Just Law, which are both available from US Chess Sales and Amazon/Kindle. Additionally, Tim recently revised The Guide To Scholastic Chess, a guide created to help teachers and scholastic organizers who wish to begin, improve, or strengthen their school chess program. Tim is also a member of the US Chess Rules Committee. His new column, exclusive to US Chess, “Just the Rules” will help clarify potentially confusing regulations.
SHARE: