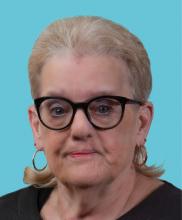 Judith (Judy) Misner, our Director of Administration, is retiring on May 27 after almost 52 years working for US Chess. She was hired on October 12, 1970, as a membership clerk and over the years has held these positions: Membership Supervisor, Membership Services Manager, Membership Director, Assistant Director, and her current position. Judy will remain with us in an independent contractor capacity for the time being.

On May 19, we held a retirement party at the Crossville, Tennessee office for Judy Misner. A number of telecommuting staff traveled in for this special event as did some former employees. Everyone wore a tie dye t-shirt in honor of Judy's favorite clothing item! In the below photo, Judy is holding two of her gifts; a quilt given to her by Korey Kormick, and a pair of Swarovski baby tortoises from US Chess, as Judy enjoys collecting turtle figurines. 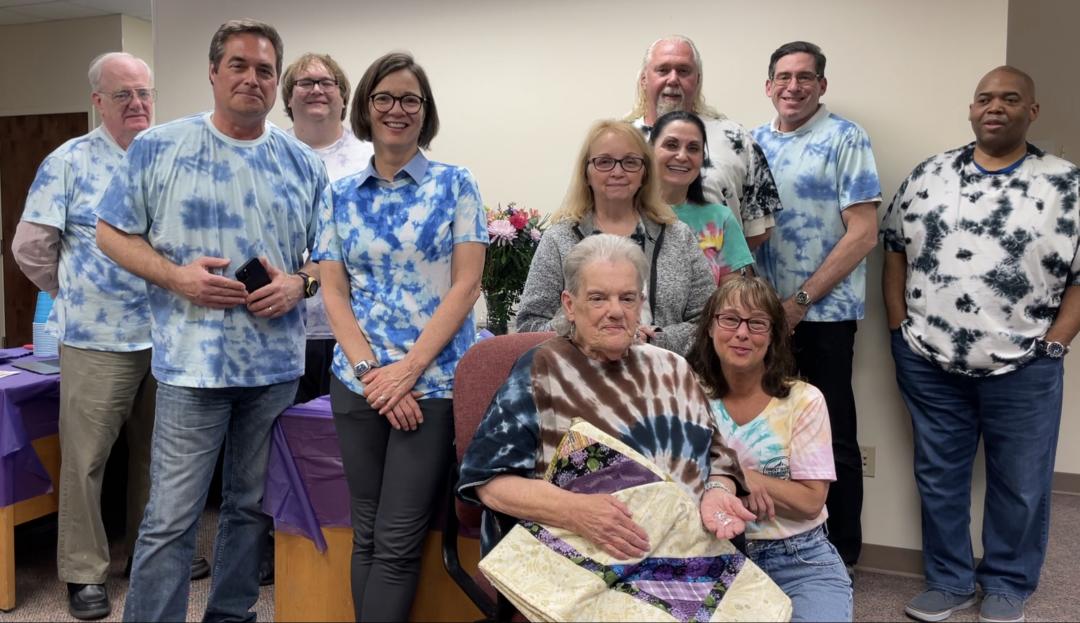 Some more pictures from the retirement party: 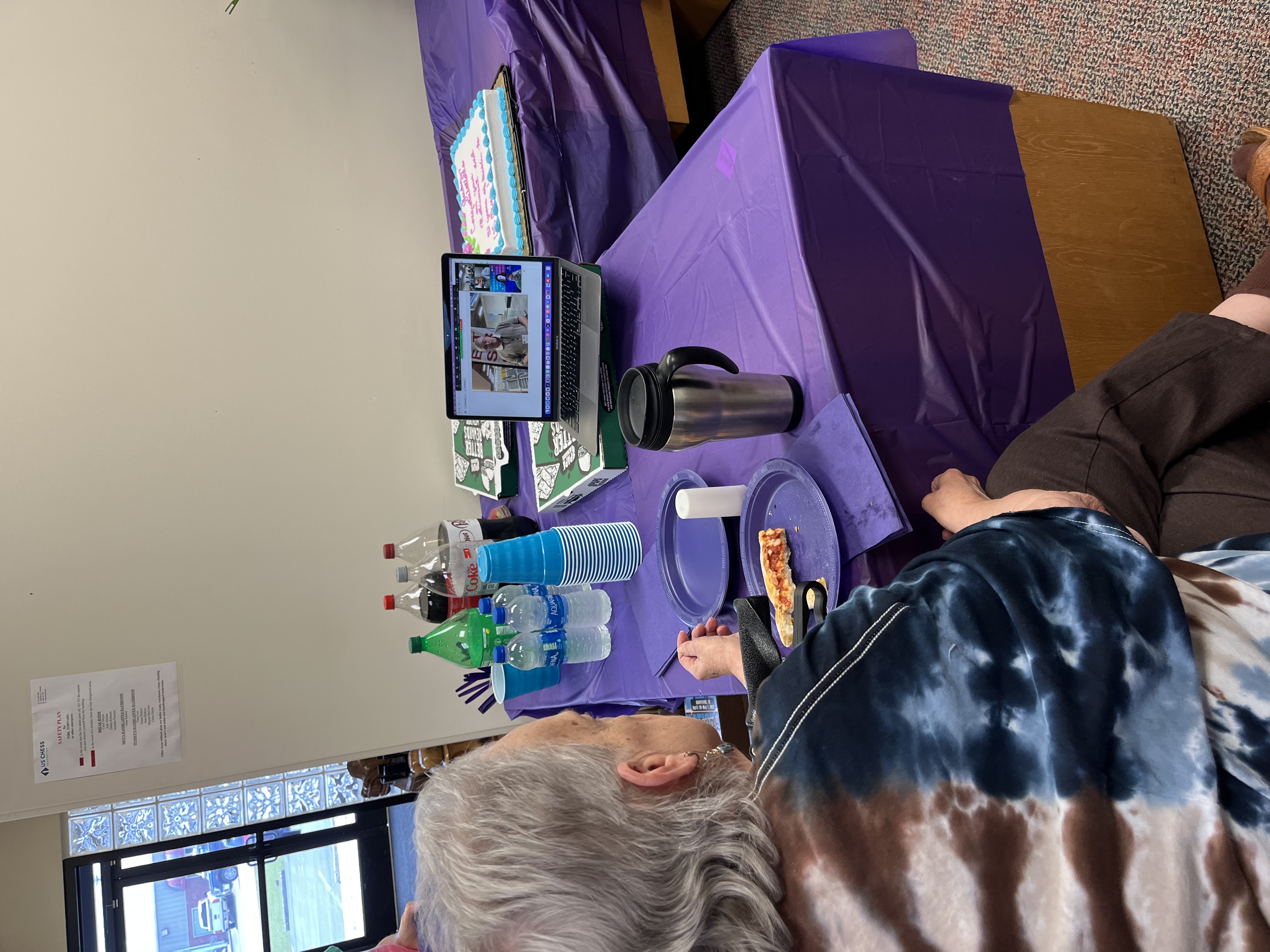 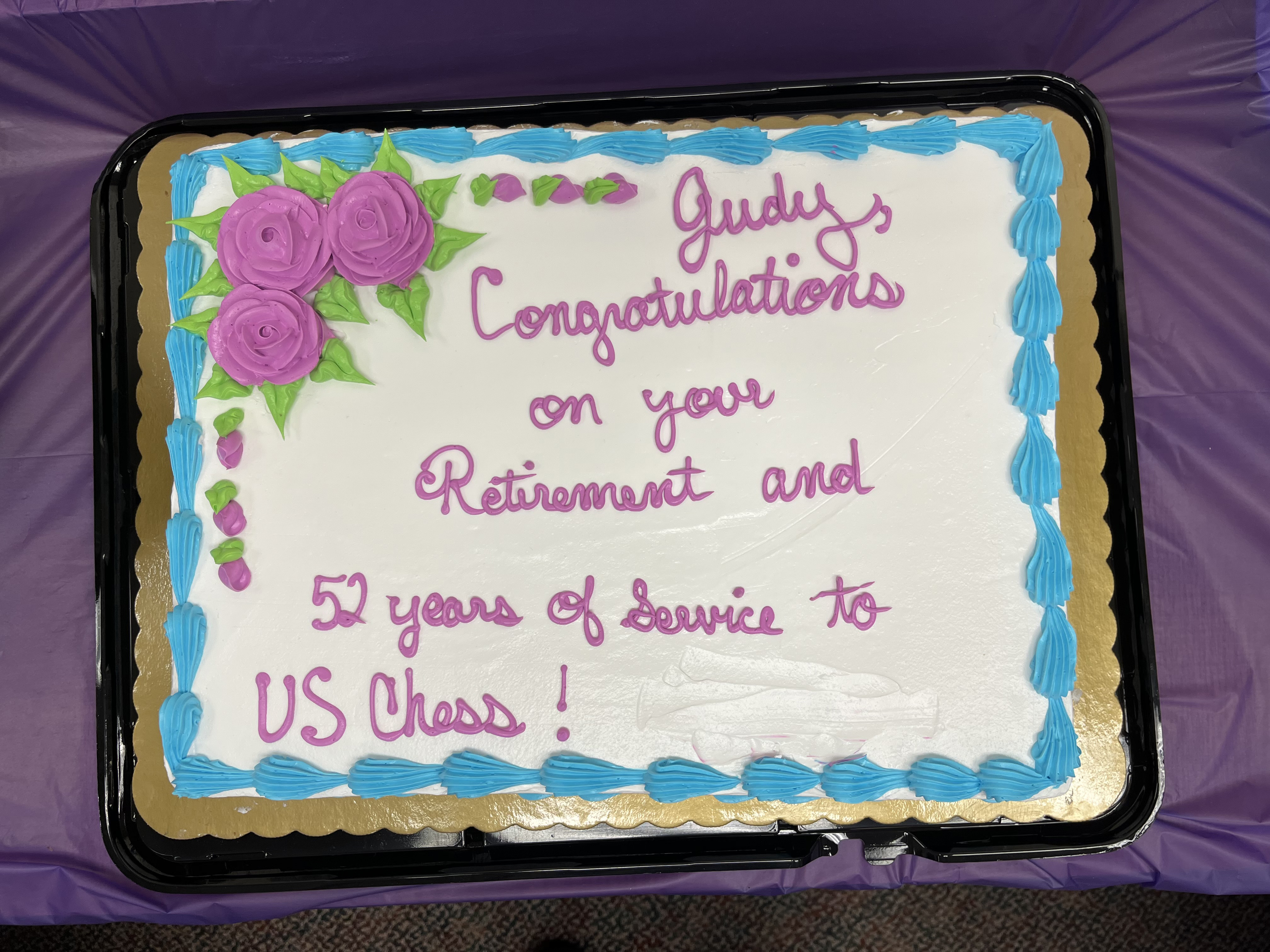 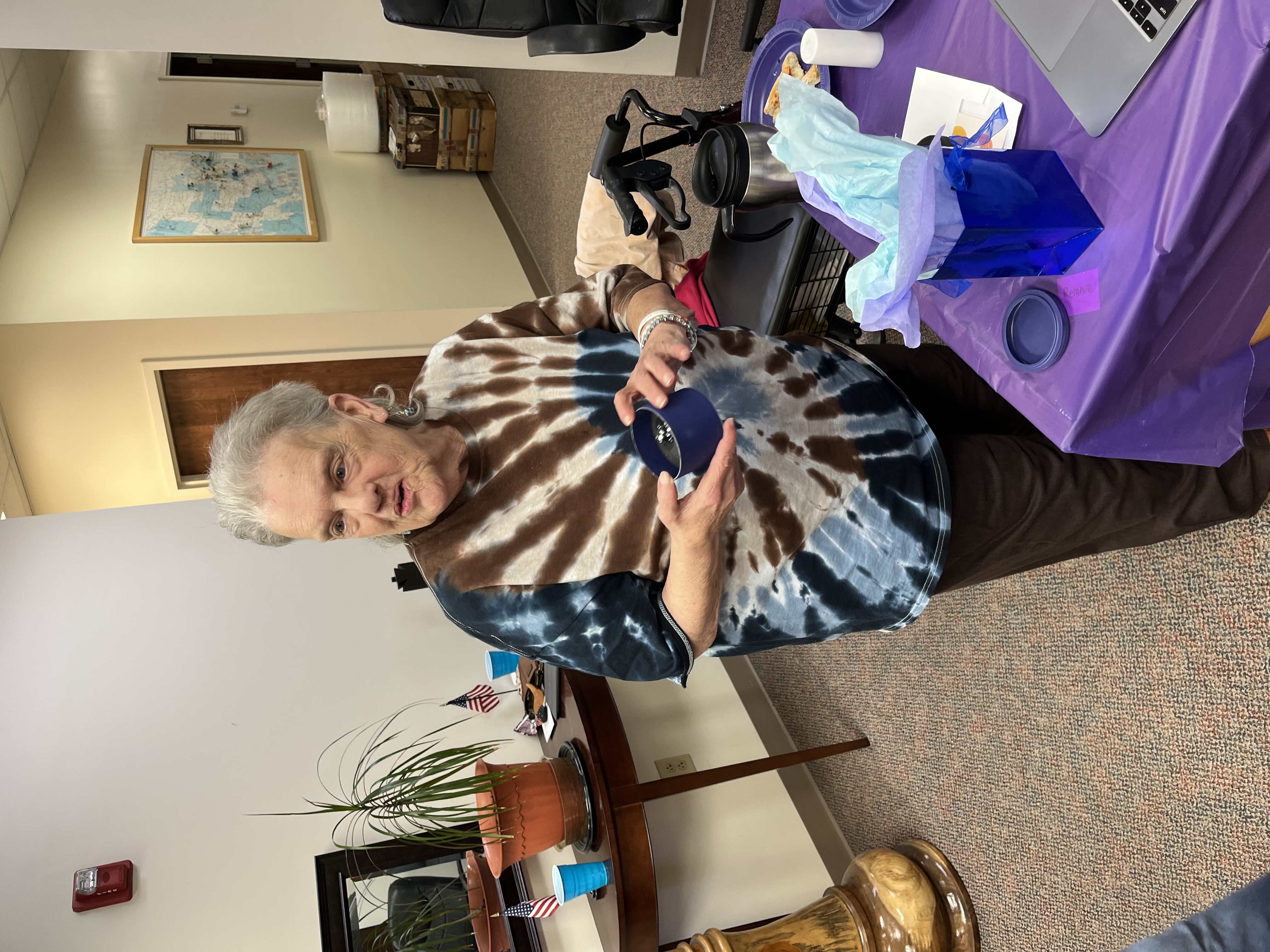 From left to right: Judy interacting with some of the people who Zoomed in for the party (which included executive board members Mike Hoffpauir, Randy Bauer, and Chuck Unruh as well as Womens Program Director Jennifer Shahade and Governance Coordinator Rose McMahon); the celebratory cake; Judy opening her gift from US Chess.

As you might imagine, Judy has appeared in a number of staff photos over the decades. The first one is from 1977 (Judy is fifth from left) ; the next one is from the early 1980s (Judy is second from left among those seated). Another staff photo appears in the video at the end of this article. 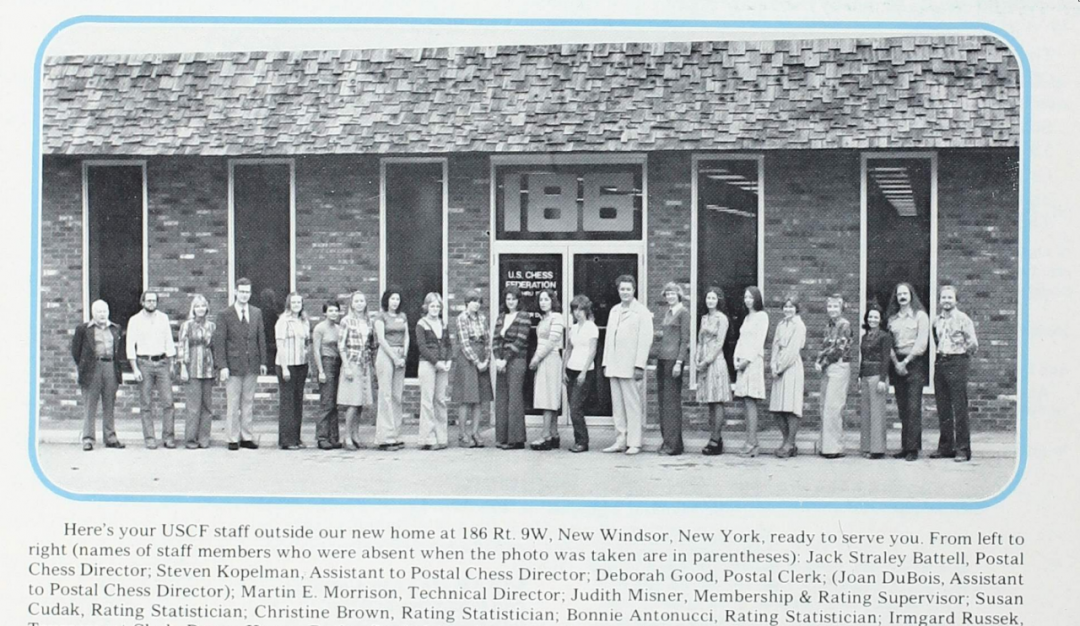 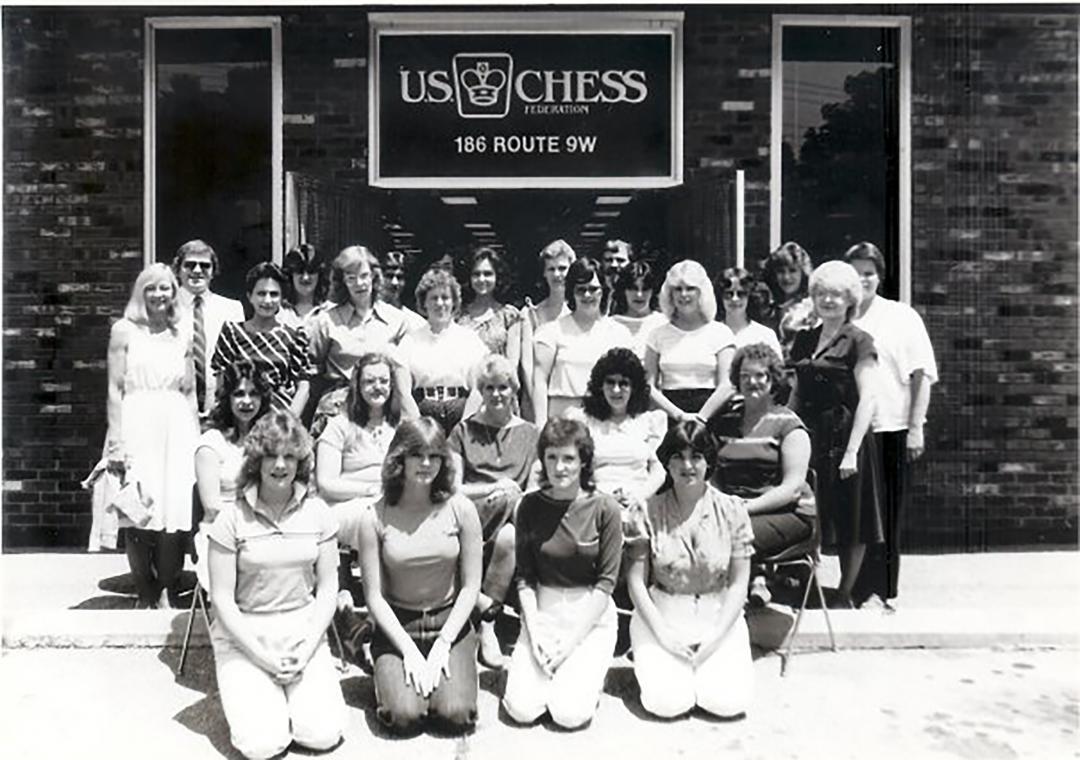 Judy told us that her favorite memory of working at US Chess was "tackling my fear of heights and attending the World Championship at the top of the World Trade Center in New York City."

Judy had previously told us about what she has learned about the value of chess: “I like the fact that chess can be rewarding on so many levels. You can take the game seriously or you can just have tons of fun by just playing the game. It makes me think about each move that I make—some are great and some not so great. However the process, I believe it’s what helps me to look at other issues of my life and makes it easier to plan better. By looking at a problem and breaking it down almost like one move at a time, it usually helps to make the particular problem not so overwhelming.

"We taught chess to a friend of ours who had many health challenges that we met in the local nursing home. We would play chess every Saturday for four years until he passed. It was truly amazing how the whole experience had positive results for him, not only for mental stimulation, but also physically. The nursing home facility noticed the difference and made sure that there were chess sets available in the recreation room as they found out that many of the residents did enjoy playing the game. So it’s not a win/loss or draw, it’s a win/win for everyone.”

Judy will now have more time to enjoy one of her favorite activities—staying home and watching stock car races on TV along with reruns of the old shows she watched growing up. She told us, "I am so grateful for all of the acquaintances, friendships and experiences that I have with so many great individuals over the years.  They will all hold a special place in my heart forever."

A number of current and former employees, past presidents, and the current president recorded some video messages for Judy:

Judy, thank you for your…

Judy, thank you for your countless hours of help over the past 28 years. Your dedication never waned, and that will be an inspiration to me as I enter the second half (hopefully) of my career in chess.

I can't thank you enough for…

I can't thank you enough for helping me with a very delicate matter some years ago. You were a rock -- for me -- as you've been for countless others. Glad you're staying on in an independent capacity. God Bless you with a healthy happy retirement, Judy. And again, thank you.

Judy,  You were the first…

You were the first US Chess contact I spoke to in 2016 as I frantically called from Alaska searching for administrative help. I can only imagine how many other people have been blessed by your kindness and willingness to go the extra mile with a smile! Congratulations on achieving such a milestone!! We are all indebted. May Caïssa be with you.

World class period. US CHESS GLUE. Only US CHESS office living witness to my entire 67 year chess career,She saw it all period ......was in the eye of the Fischer era chess hurricane around the clock... knew them all and knows UP CLOSE AND PERSONAL where the bodies are,,. also the go to person of real integrity for New Orleans documentarian /Tulane University archivist Mr. Derek Bridges of KD video/ New Orleans . All others follow.
Jude Acers of New Orleans

Judy and her sister Joan…

Judy and her sister Joan were among the most important people in the growth and success of the USCF, which has grown and thrived when a number of previous attempts to form US national chess associations had failed. They remained a steady, positive force throughout the most difficult times for the organization. The many thousands of members affected by their positive and competent dedication cannot be adequately counted. John McCrary, past USCF President

Judy --
You can leave the office knowing that you did a great job over many years. You (and Joan) were synonymous with core functions of the chess federation -- the membership and sales departments.

The fact that we are here in 2022 -- that is your accomplishment.

During my time in the office in the 1990s, you were always helpful and task-oriented. It was very much appreciated.

In the years since then -- any issues or problems were instantly resolved by reaching out to you (or Joan).

It is indeed a new era -- and some of us are more than a bit sad about it. Congratulations.

Thank You So Much for all your service, your dedication and your consistent efforts to go the extra mile (such as answering late-night emails to help with memberships).

We are all immensely grateful for your half-century and more of support for the US Chess Federation and for the Chess community.

I Thank You for all the assistance you gave to me as well.

Judy. thank you for your…

Judy. thank you for your many years of service with US Chess. You were the glue that held the organization together. It was wonderful getting to know you and work for you in many capacities. You will be missed. I know Susan Kantor dittoes my comments. I wish you and Gordy all the best among your retirement.

Dear Judy, thank you for…

thank you for everything you have done for USCF, and specifically for all your help to ICA!

Judy: Glad to see you'll be…

Judy: Glad to see you'll be relaxing, at least a little bit! That is so well deserved.

It's great to see that early-1980s photo, showing so many people I enjoyed working with (including you, Joan, and Joyce).

Thanks, take care, and best regards to everyone!

Judy will be sorely missed. …

Judy will be sorely missed. She was a rock, as steady, caring and efficient as they come.

Congratulations on your retirement! And thank you for your 52 years of devoted service to U.S. chess!

This lady is a chess…

This lady is a chess treasure!  I called once pertaining to a mailing/chesslife/ membership mess! And this KNOWLEDGEABLE,POLITE,HELPFUL lady cleared everything up!
outstanding!

I pray they find a replacement of her standard.

Thanks for all you have done!

Happy retirement Ms. Judy Misner, wishing you the best of your retirement!!!