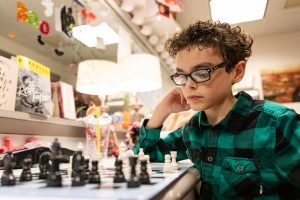 Jacob Laval backstage in his dressing room at "The Rose Tattoo." Photo by Jeremy Varner.
Starring Academy Award winner Marisa Tomei, the Tennessee Williams play "The Rose Tattoo" is a Broadway production running through December 8th at the American Airlines Theater, 227 West 42nd Street in New York City. But of particular interest to chess fans,  11-year-old Jacob Laval, who plays the character of "Billy," is an avid chess player. US Chess sent writer Tyler Schwartz and photographer Jeremy Varner to profile Jacob for Chess Life and Chess Life Kids articles later in 2020, to be tied to another production young Jacob will be appearing in, this time on HBO,  “The Plot Against America.” His interest in chess helped him get the role, which will be explained in the print articles. (Air date still to be determined.) 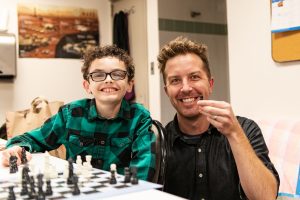 Jacob Laval with Tyler Schwartz. Photo by Jeremy Varner.
Schwartz, who is the founder and Creative Director of Chess at Three and Story Time Chess, reports, "We got a chance to interview Jacob this week and talk about his love of chess, Dr. Pepper, Rubik’s Cubes and magic! Jacob also told us why he loves chess and why kids everywhere should play. Be on the lookout for the articles in 2020!"
SHARE: