On March 5, and with growing awareness of the coronavirus, the Marshall Chess Club’s Board of Governors unanimously decided to shut down the physical club due to concerns for the members’ health both travelling to the club and distancing issues being in the club itself. Interestingly, the meeting was conducted over Zoom. Undoubtedly, similar meetings were held in chess clubs across the U.S. and the same decision was made to close the clubs. At the same time, over-the-board tournaments were cancelled domestically and globally. The 2020 FIDE Candidates tournament was halted at the halfway point and remains in limbo. In a very short time, over the board chess ended for the foreseeable future due to lockdowns and social distancing mandates. Revenues for chess clubs and tournament organizers disappeared. Since the Marshall’s main source of revenue is membership dues and tournament income, closing the physical club is literally an existential crisis. After contacting the Mechanics Institute Chess Club and the Charlotte Chess Club directly, and after surfing the web to “visit” other physical chess clubs, I realized all chess clubs are experiencing the same challenges and crisis. Analysis and Overview I was appointed the Chair of the Marshall’s Tournament Committee a few months ago. The repercussions of social distancing and shelter in place to protect people from the pandemic, forced the tournament committee to explore alternative ways for the members to play tournament chess. 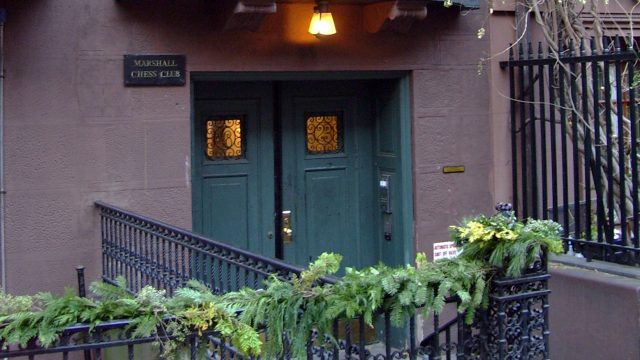 The Marshall’s (and other clubs) main sources of income are membership dues, profits from tournaments and fees for classes. The challenge is to provide value added, revenue generating services that encourage members to join and renew when social distancing is required. The only immediately available solution is to leverage the existing infrastructure of the online chess platforms for tournament chess. The reality is that millions of people are already playing chess online and the various platforms, especially chess.com, had a huge surge of new members and games played as the pandemic became global. We can consider two major objections to hosting online tournaments. (1) “Over the board chess is real chess and I enjoy it more.” I agree, but right now there is no real choice. Literally, game over. I personally think I see and play better on a three-dimensional board and sitting across the board from an opponent is a better way to experience playing chess.  I am of another generation and lived in a city where chess is readily available. Current chess players of all strengths play constantly online in the comfort of their own homes and find it perfectly normal. It doesn’t matter where one lives or the time of day in order to find a game. Regarding over the board chess, I think of Kasparov losing to Deep Blue and I believe that, if he had been sitting across from a flesh and blood opponent making the same moves, Kasparov would have won. I also recall two Bobby Fischer experiences and observations that could only happen in over the board play… (a) “Spassky has such a poker face that you don’t know if he just blundered or played a brilliant sacrifice; (b) “I was considering the blunder….but Trifunovich seemed too quiet all of a sudden, and I suspected he had tuned into my brain waves.” (2) Cheating. This is the biggest bugaboo to online chess especially if money is involved. Someone sitting in their home has access to a computer chess program that is stronger than 99% of all chess players. The temptation to use a chess program to gain rating points and win money is very strong. Even GM’s have been caught cheating online. But the online platforms were already trying to identify (and punish) cheaters. Ken Regan, among others, has written software which chess.com has deployed on its platform.  The software detects that a given player’s moves are crossing a threshold of being a computer’s choices. Of course, the cheaters have tried to beat the software by keeping the percentage lower. But this to me is the same cycle of back and forth with hackers and cyber security. They will leapfrog each other in a deadly dance. Interestingly, in classic jiu-jitsu style (use your opponent’s strength to your advantage), chess computers analyze games to detect player’s possible use of computers! What’s important to me is that the online platforms are aware of the issue and are spending money to address cheating. Some platforms only publish legalese asking tournament players to agree to the terms to not cheat and adding threatening language. Chessclub.com’s software, Speedtrap, analyzes every tournament game during and after for possible cheating. Chess.com is investing heavily in the software to add to the integrity of their platform. Another major platform, Lichess, is going down a similar path. A good reputation as a place to play cheating free is worth it to the online platforms to attract members. The key point is that the online platforms are all aware of the cheating problem and are investing in mitigating it to attract members and customers. Organizations running tournaments on a given platform benefit from these ongoing efforts at no cost. Online tournaments at the highest level are occurring with increasing frequency.

Conclusion: Counter-measures against cheating are not perfect yet, still evolving, but being addressed. The Marshall’s Plans In light of this, the Marshall Chess Club hosted its first online tournament with entry fees and money prizes on May 14. The tournament was open only for Marshall Chess Club members and was hosted on chess.com. Over 30 players registered for the tournament. Registration is done on the Marshall’s website (which allows the Marshall to confirm club membership). Class prizes were offered using USCF ratings, pairings are based on chess.com ratings. Players had to be members of chess.com (which is a financial incentive that benefits chess.com). And players were required to be on camera in a Zoom “tournament room” to allow the tournament director to monitor for cheaters. Again, this is not a bulletproof solution, but it’s a deterrent. This tournament was a proof of concept. It was successful and we are slowly adding more tournaments to the Marshall calendar. We have identified other opportunities for expansion: