National Tournament Director and International Arbiter Wayne Clark passed away on November 18, 2021 after several months of health struggles. He was 68 years old.

Wayne leaves behind two children, Aaron and Jen, and four grandchildren. Being a grandfather was the focus of his later life, retiring from sales work many years ago and becoming a professional Tournament Director and organizer. Recently, Wayne had semi-retired from chess to spend more time with his family. The last event he directed was as an IA in St. Louis for an online FIDE tournament. 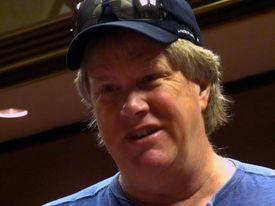 Wayne selflessly taught the art of tournament direction. He learned the craft at the club level, then moved onto bigger events at the state and national level, staying focused on creating a great tournament experience for players. He became a familiar face nationally and around the Midwest, the organizer or chief TD for most events played in Illinois for the last 20 years. A few tournaments on his list include the U.S. Open, the World Open, the FIDE International Youth Championships, several Illinois Opens and CCA Midwest events, and many scholastic events on the state and national level. US Chess recognized Wayne as Tournament Director of the Year in 2013.

Wayne was a great storyteller and humorist, and one amusing tale seems appropriate for the occasion. He once asked to be cremated, describing a process that makes ashes into solid objects and wanting those ashes to be formed into chess pieces. “Then,” he explained with a wink in his eye, “my grandkids can play a game of chess with those pieces, and say they played chess with grandpa!”

He was a close friend, and together we co-authored the book My Opponent is Eating a Doughnut. We met for coffee often, and once a month enjoyed dinner together. He has been a guest in my home for the last 20 New Year’s Eves, enjoying an afternoon of chess and one of my home-cooked meals. This year, I will set a place for him at our table, pour him his favorite adult beverage, and toast his memory.

This is very sad news.  I worked with Wayne twice.  He was so knowledgeable and so much fun to work with.  He was such a great story teller. I'll always remember him telling a story about a kid that took out his glass eye at the board and the other kid freaked out.

I roomed with Wayne several…

I roomed with Wayne several times at World Open or some other CCA event in Philadelphia. Nice guy who will be missed.