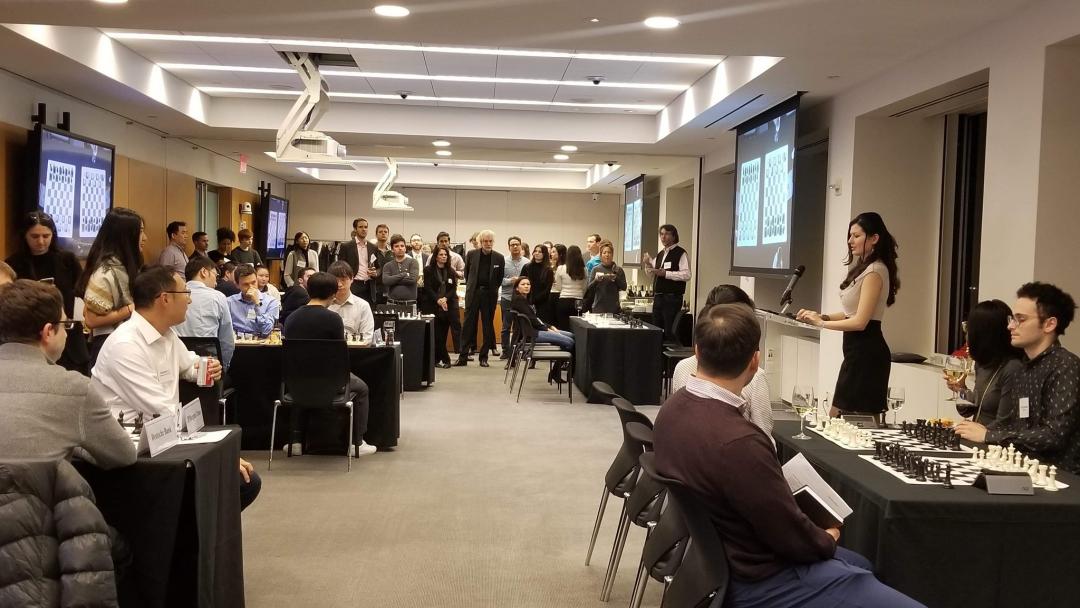 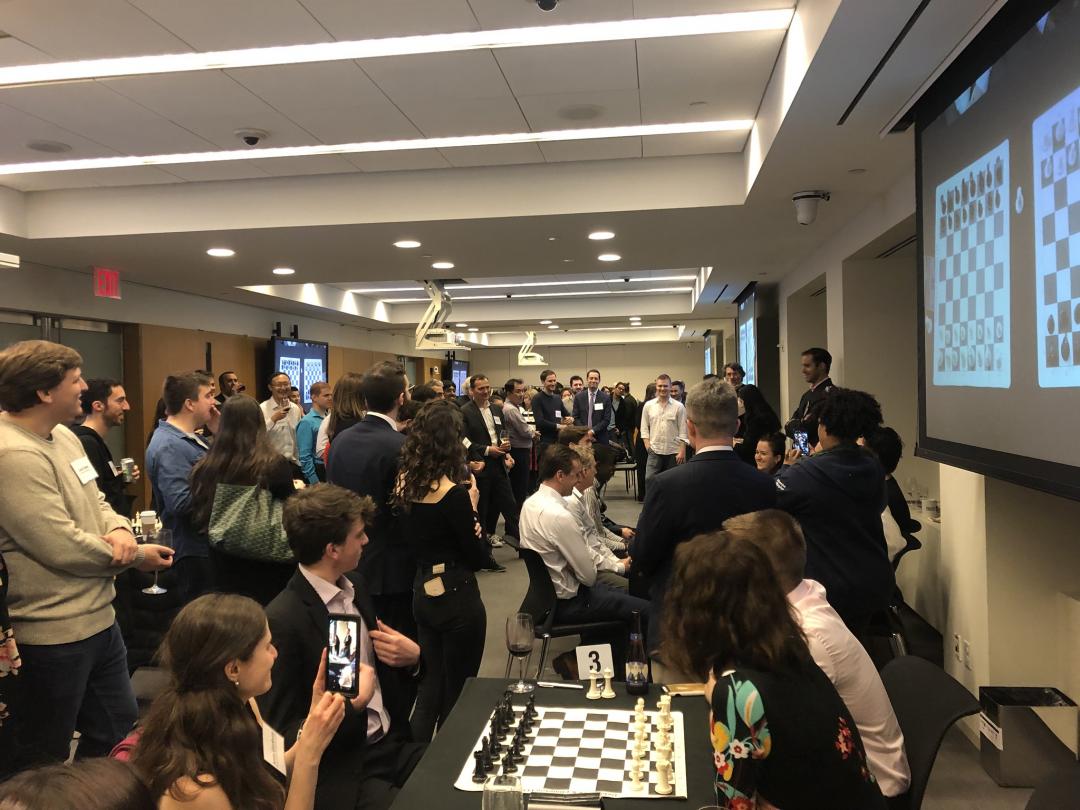 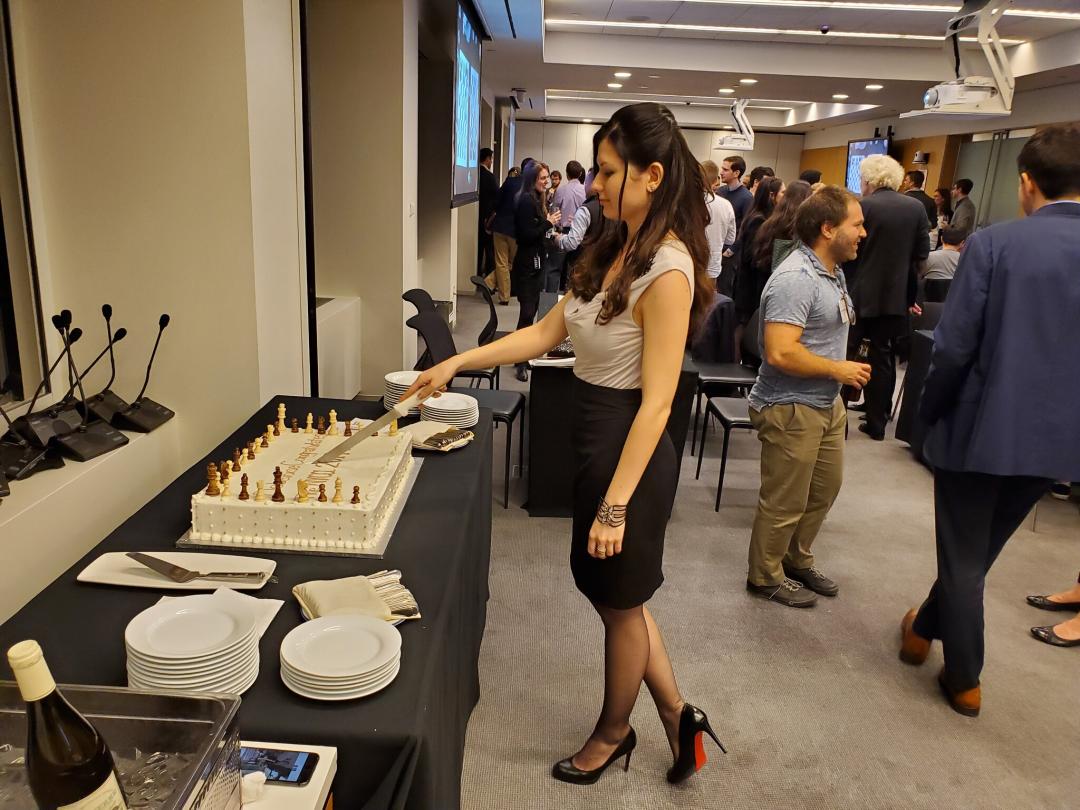 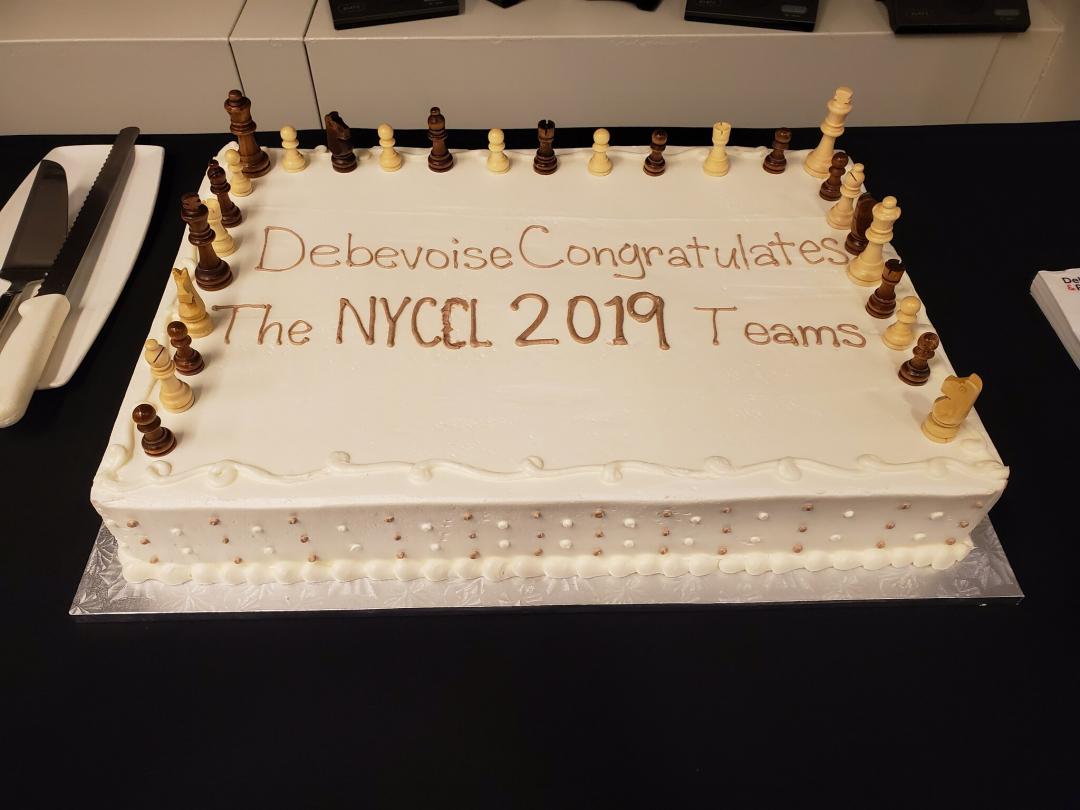 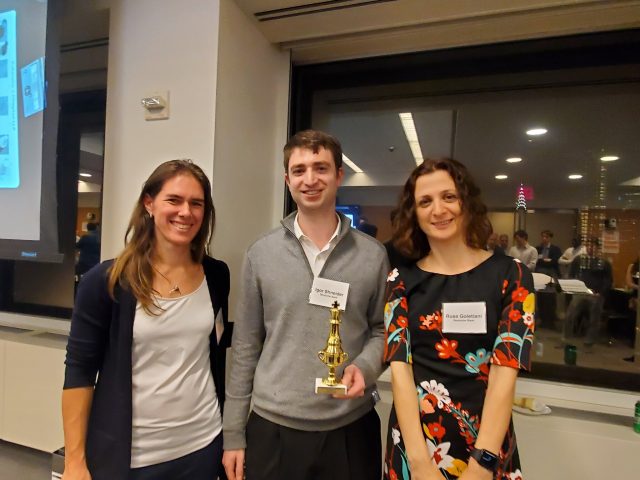 Cotler, Schneider and Goletiani
Google was also in the mix, capable of shaking up the superior tiebreaks of Goldman and Deutsche Bank, who were each paired with a lower-ranked team after blazing through the rest of the field in prior matches. After the double-game rounds of G/10 + 3’d (each board plays once with white and black), Goldman and Deutsche Bank tied for first with 5/6 match points. Goldman, however, inched its way ahead on tiebreaks by scoring 28.5 out of 36 possible game points against Deutsche Bank’s 25.5, cementing Goldman as the new NYCCL “leader.” 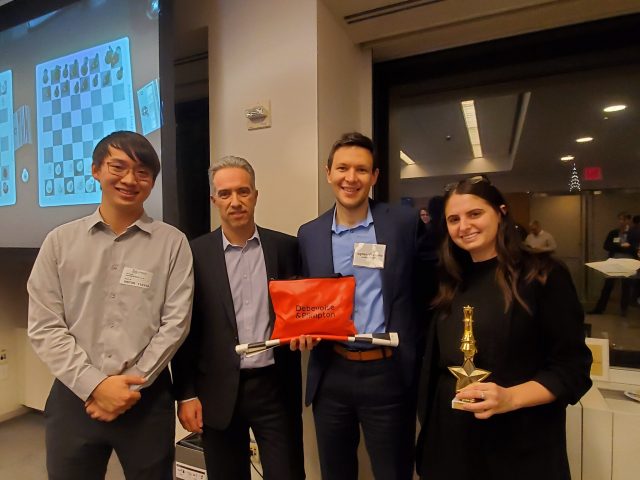 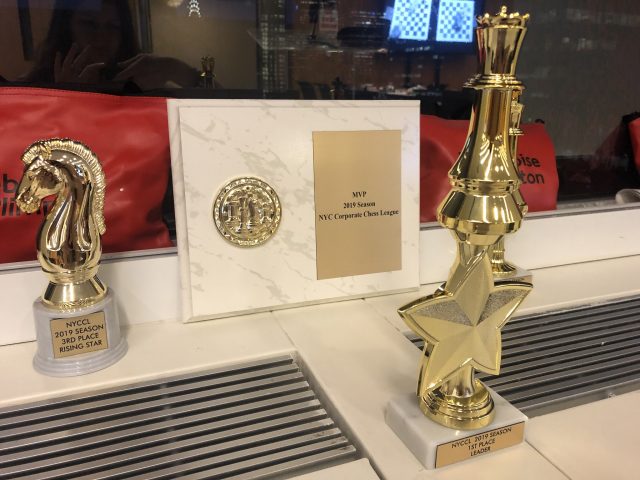 The first-place team gets the “Leader” cup, second is the “Trailblazer,” and third is the “Rising Star.” The top-placing teams also receive a Debevoise-branded chess set as used throughout the season. 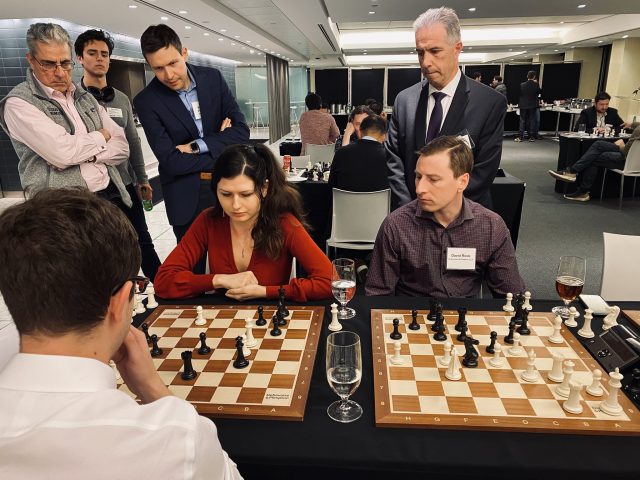 Alisa’s win with black over FM Igor Shneider in match 5 tipped the game point lead in Goldman’s favor. Eagerly watching the outcome in real-time are Goldman players Len Ioffe and IM Bogdan Vioreanu. Also pictured is Debevoise’s regular board 2, tax associate attorney David Rock, a solid addition throughout the season.
“I’m proud as both a team captain and NYCCL co-organizer. The Goldman Sachs team truly came together on and off the board against formidable competition. It’s a credit to the NYCCL that it encourages top players to come out of chess retirement to boast a strong field. We’ve accomplished exactly the type of community-building we were striving for,” comments team captain Alexandra Wiener, an Analyst at Goldman Sachs and NYCCL co-organizer. Google was not to be discounted. After a nail-biter match-up against tough opponent BAML, Google ended up splitting the match point after a key upset by Google board 2/3 Yury Volvovskiy (2053) over the NYCCL number-one ranked player IM Victor Shen. Google finished in clear third with 4.5/6 match points. 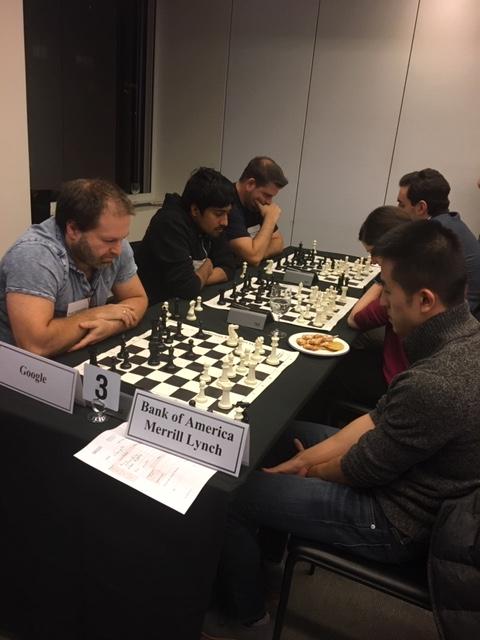 Along with IM Victor Shen, BAML Board 2 Anna Ginzburg is co-team captain. Board 3 is Christian Sbarro, one of the top board 3 finishers this season. 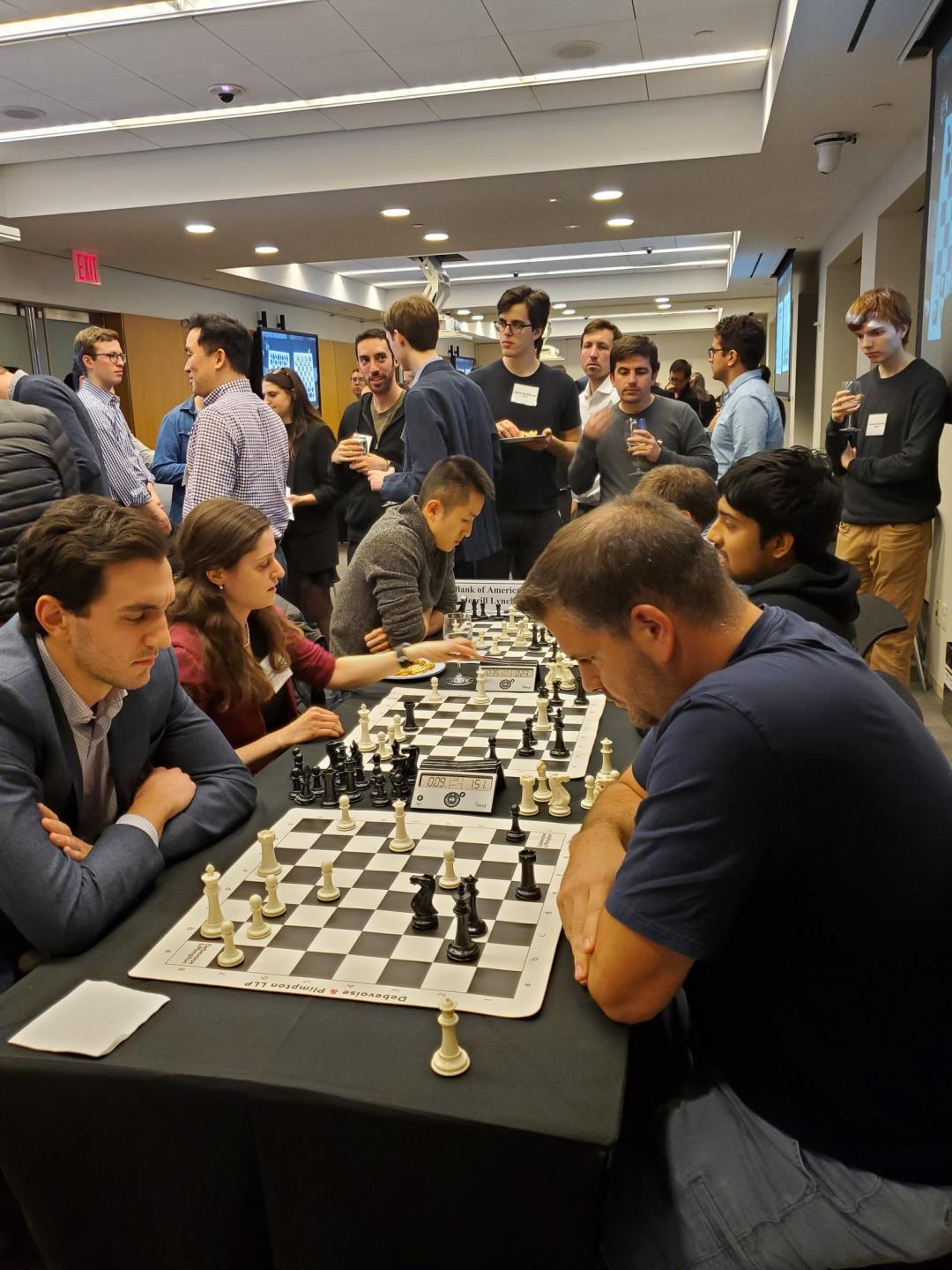 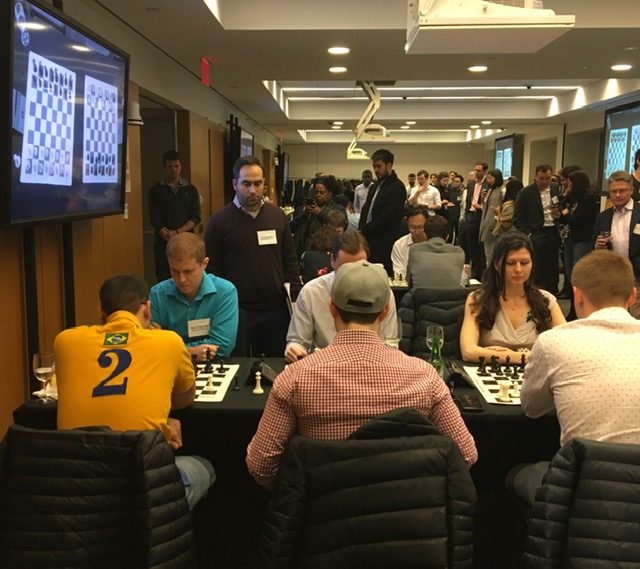 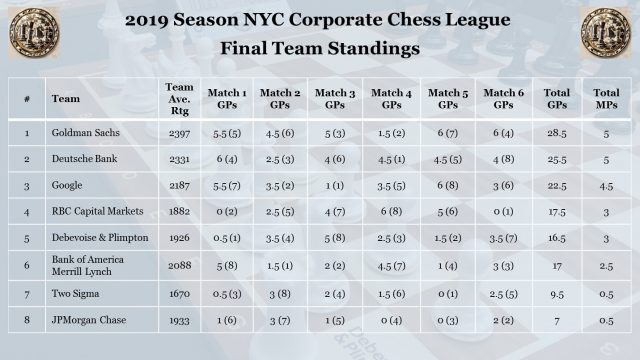 In addition to team prizes, the finale celebrated the league’s top individual performers. The format of the NYCCL—particularly the schedule in playing the matches as a series over approximately two months—introduces a unique factor as to what constitutes an MVP. As busy corporate professionals with demanding hours and numerous scheduling conflicts, the players have to make sure to clear their schedules to make each evening match. Thus, the best-performing players are also those whom the team can rely on to play each match, especially for teams that have a limited number of alternate players. The player rising up to this challenge with another smashing performance with 10.5/12, was none other than last year’s league MVP: IM Rusa Goletiani (Deutsche Bank). Rusa was again leading all the way, competing against her own record of 11/12 last season. Read the 2018 CLO article by Alisa on NYCCL here. 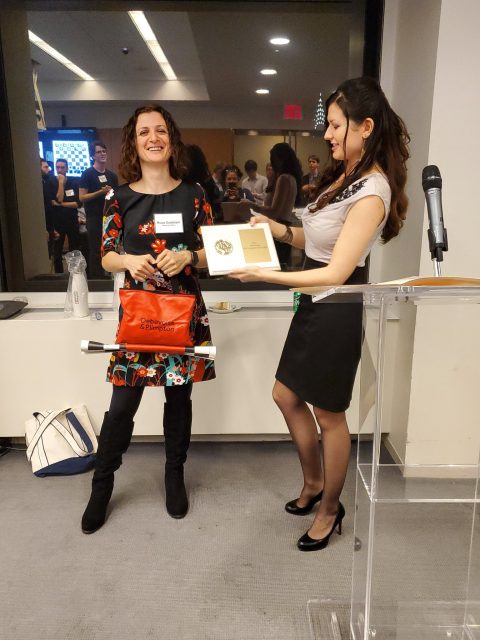 Rusa is all smiles after earning the season MVP award for the second consecutive year. Alisa delivers the team and MVP awards after final standings are calculated during the tandem exhibition series.
Rusa competed on board 2 throughout the season, as did another top performer. IM Bogdan Vioreanu of Goldman finished close behind with 10/12. Another honorable mention in the MVP category was Google’s Yury Volvovskiy, who finished with 8/12. Yury was board 3 on Google’s roster, but ended up playing several matches on board 2, and was bumped up to board 1 during the key finale match-up against IM Shen. The top performer on board 1 turned out to be yours truly. I was pleasantly surprised to finish with 8.5/12. 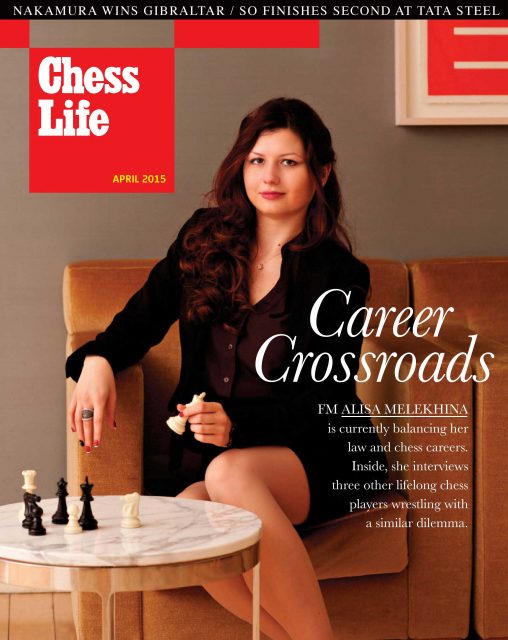 Alisa scored a resounding victory against Google in match 5 in her pet gambit line in the Advanced French. 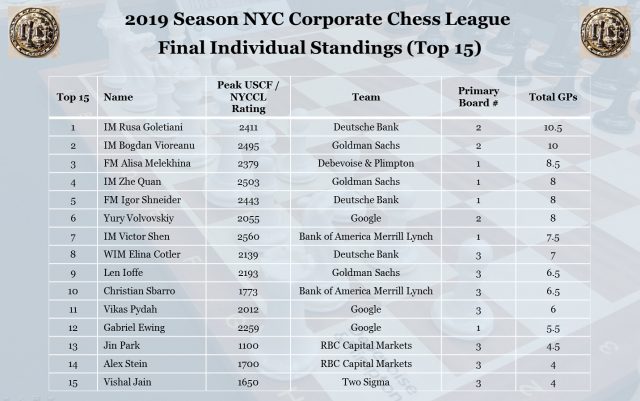 I was delighted that the legacy of the league, as an initiative founded by female chess players, continued this season. The two top finishing teams had female captains, and two of the top individual finishers were women. 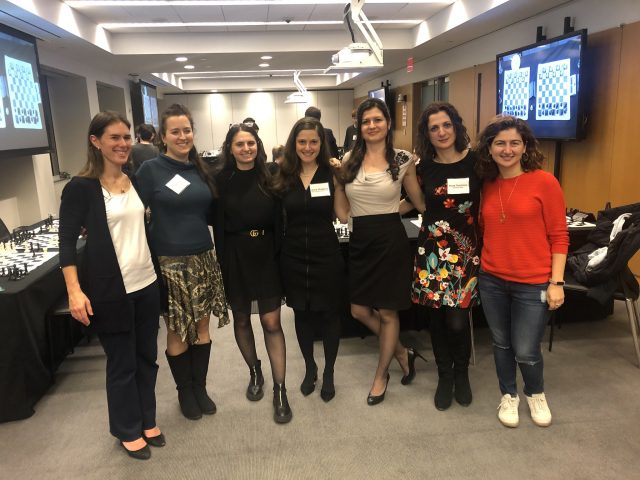 This season’s ladies of the league, from left to right: WIM Elina Cotler, GM Irina Krush, Alexandra Wiener, Anna Ginzburg, FM Alisa Melekhina, IM Rusa Goletiani, Ana Izoria
The NYCCL closing ceremony wouldn’t be complete without a special side-event for the record-breaking turn-out of spectators. Although the matches are typically kept private to the competing teams and internal guests, we plan a few open events to encourage broader interest. Following on the GM blindfold simultaneous exhibition match and interactive presentations and beginner workshop earlier in the season, the finale featured even more chess stars. After the official match concluded, players and spectators were treated to a tandem match series, composed of teams of professional and amateur player pairs. 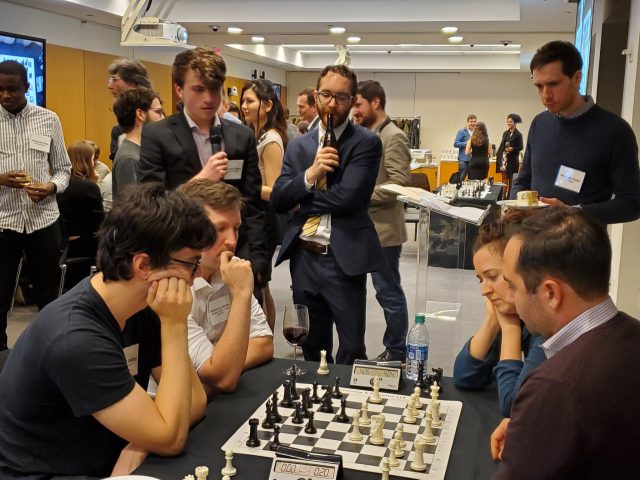 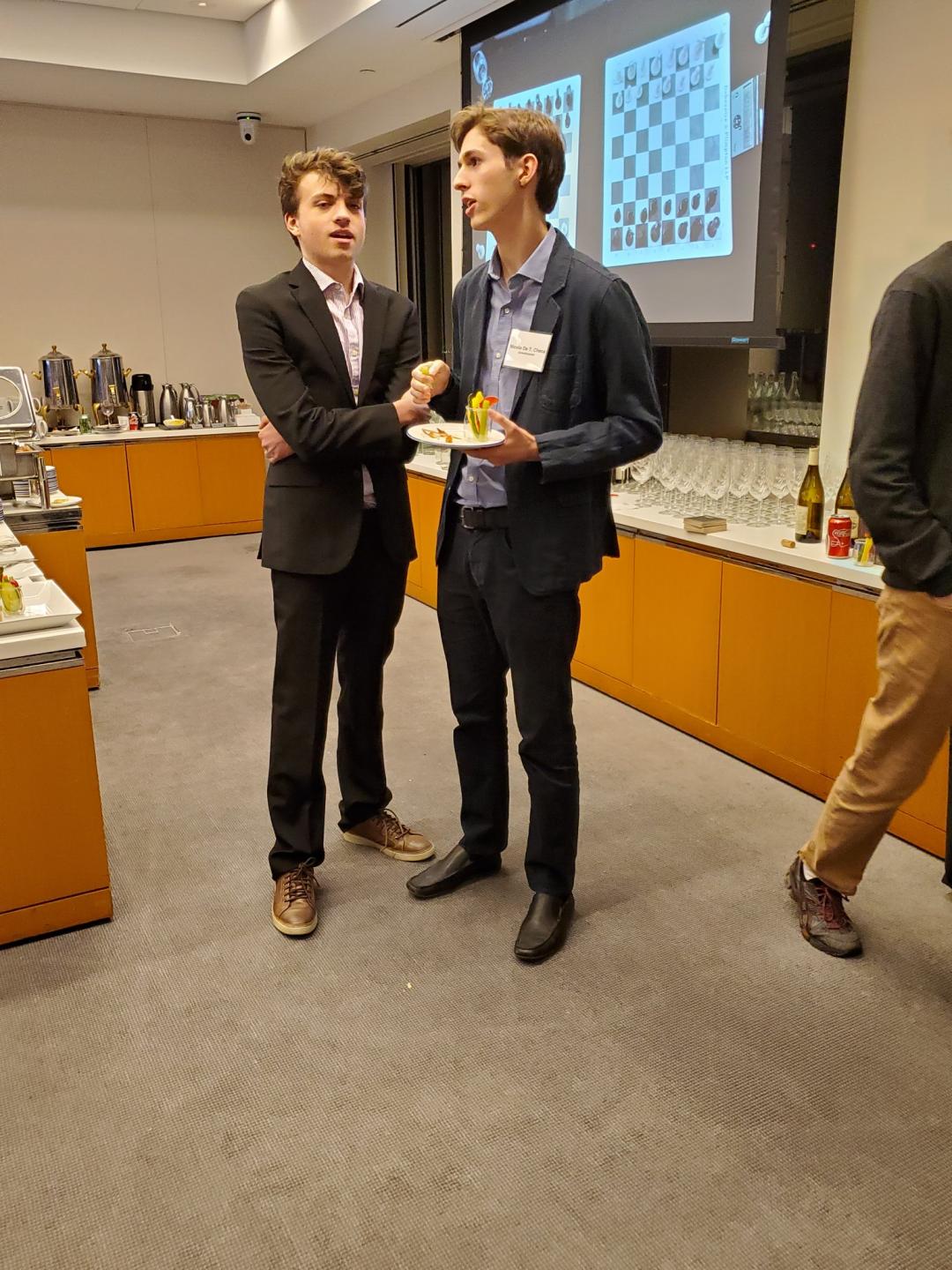 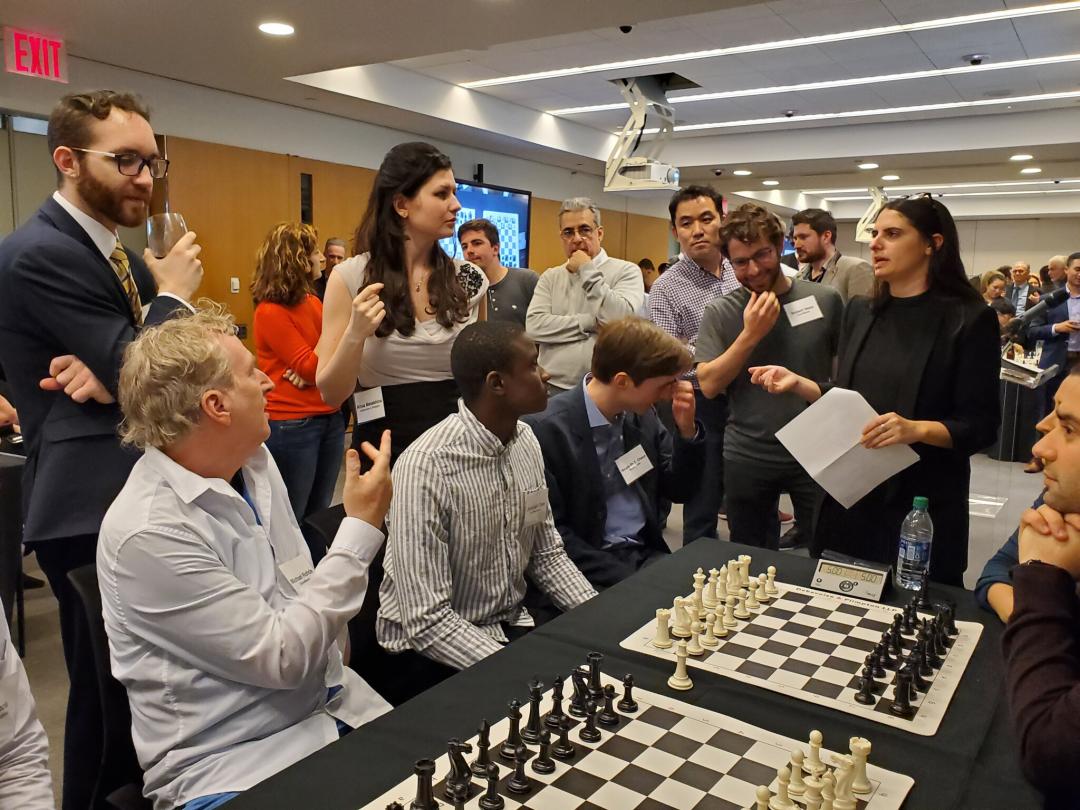 Alex covers the tandem rules while GM Robert Hess drops in to assist with commentary.
Among the four teams of pairs, two of the pairs featured a strong combination of IMs and masters/experts. 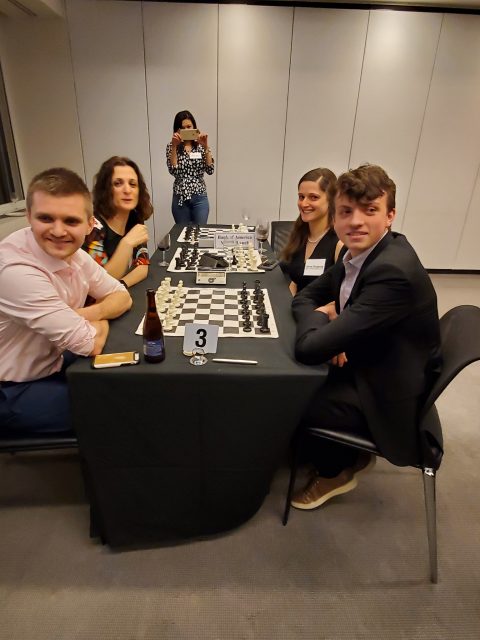 It was expected that one of these “balanced” teams would beat out the GM/amateur pairings, but these two teams (IM Rusa Goletiania/NM Alex Pelekhaty and IM Hans Neimann/Anna Ginzburg) ended up unable to make progress between themselves and tied. This paved the way for a play-off between the victorious pairs, leading to a face-off between GM Irina Krush and GM Mac Molner. Molner kindly returned for the closing ceremony after his stint as the featured GM for the opening ceremony where he faced two brave volunteers in a blindfold simultaneous exhibition match. This time, one of the former challengers Mac swiftly defeated in that blindfold simul, Debevoise’s own P. Sebastian Ruiz, got his revenge with the help of teammate GM Irina Krush. 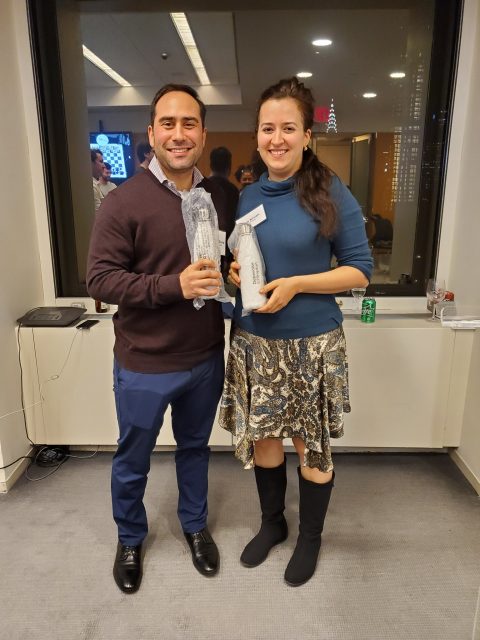 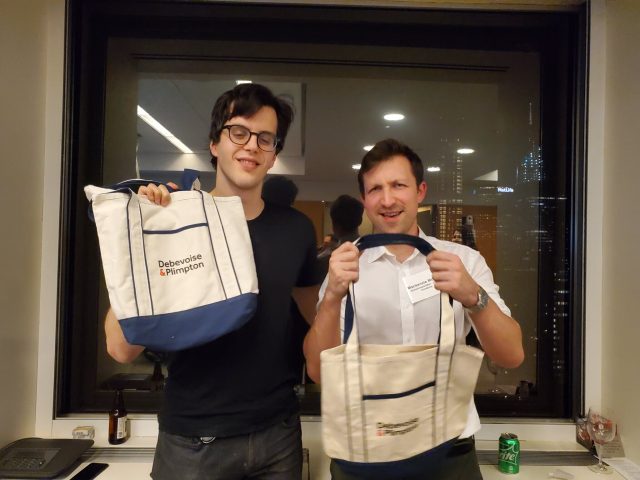 The Mac and Zack attack! GM Mac Molner and teammate Zack Goldberg (Google engineer and team captain) think of ways to make use of their swag from the tandem tournament. The top team name was a close call with “Rock and Rohde” at their heels. 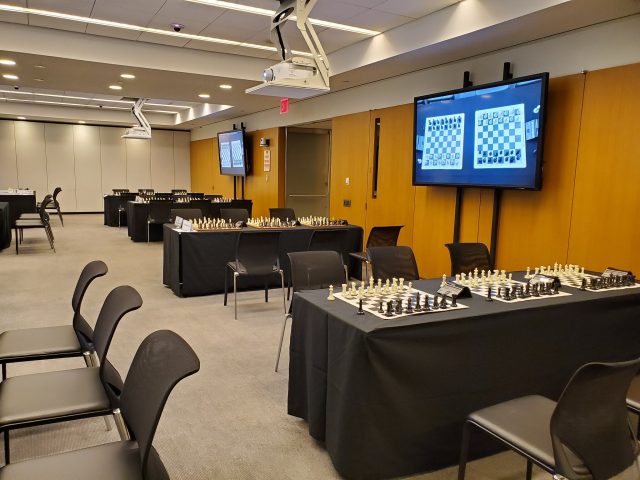 The calm before the storm. A lot goes into each match, including catering and room set-up and post-match clean-up, and overseeing player & guest registrations, which are all expertly handled by Debevoise’s conference services, catering, and marketing departments.
About the New York City Corporate Chess League The NYCCL brings together chess players employed at various firms and corporations with offices in New York City.  The league is comprised of three-player teams; each player engages in a double match of G/10 + 3’ (once with white and black) during a single match. The season typically includes six total matches spanning two months.  Games are not rated, although players’ reported USCF and/or FIDE ratings are used for pairing purposes. All players participate in their personal capacity, and must all be employed by the same private entity to form a team. Teams are required to have at least five players (not necessarily) rated on their roster in order to ensure a full line-up each match. Membership and attendance is free, but is currently by invitation only. Debevoise & Plimpton LLP was the host of the 2018 and 2019 seasons. For more information, contact amelekhina@debevoise.com and alexandra.wiener@gs.com. *FM Alisa Melekhina is a World Team Championship gold medalist and long-time competitor in US open tournaments and women’s national and world team invitational events. She graduated from the University of Pennsylvania Law school in May 2014 and is currently practicing as a corporate litigation attorney in NYC. She previously wrote a popular CLO article on Balancing Law School and Chess.
SHARE: