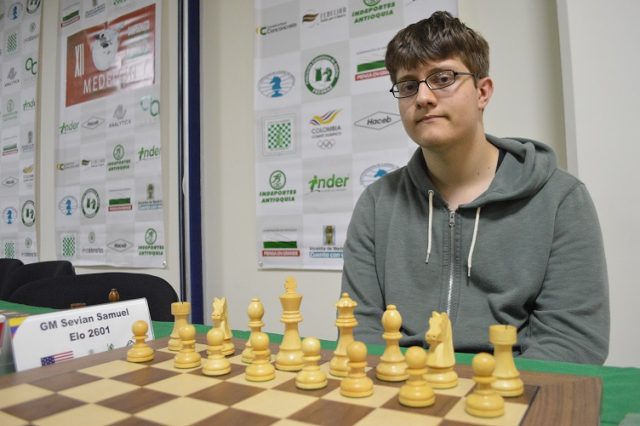 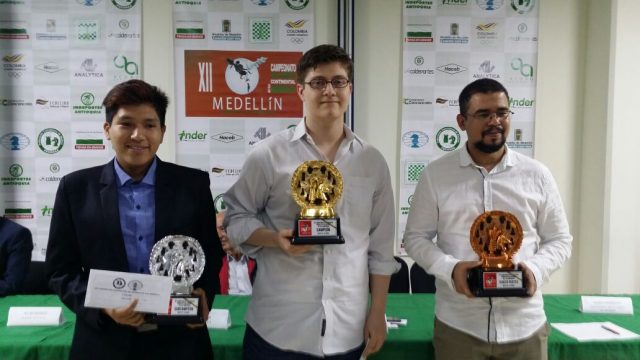 Photo Federación Colombiana de Ajedrez.
Saving further complications was that among the eight players who tied for first in Medellín, three (GMs Cordova and Cori from Peru and Flores from Argentina) had already qualified. So all five of the others who were tied for first, including Sam, earned a spot. Half-a-point behind the eight-player group were seven other players…and only one WC spot remaining.  One of those players, GM Kovalyov from Canada, had already qualified. The other six players competed in a Rapid (G15 + 10) play-off to determine the last spot!  Among the six-player group were three Americans:  GMs Kaidanov, Hungaski and Ramirez.  GM Fier from Brazil won the playoff and earned the last World Cup spot. In addition to the four USA players already mentioned, GMs Shabalov and Erenburg, IM Andrew Tang, FM Gregory Markzon, Bob Holliman, Daniel Parmet and Douglas Cox were also in attendance.  The group of 11 USA players at this event appears to be our largest delegation ever at this event! Congratulations to all of our players, particularly to the youngest Continental Champion ever, GM Samuel Sevian!  To see Samuel’s post-tournament interview, please check the event's Facebook page.  For results, see chessresults.com. where you can also find play-off results. For more games, see the live transmission record at http://live.chessbase.com/watch/XII-Americas-Continental-ch-2017
SHARE: