The silver anniversary edition of the Southern Open was held at the Wyndham resort in Orlando, FL on July 21-23rd and featured a quite strong Open section.  There were 3 GMs, 1 IM, 3 FMs, and 4 NMs in the 23 player Open section.  GM Yuniesky Quesada Perez was the highest rated of the three GMs at 2696 USCF, and he played every game on board one en route to winning the tournament, but it was certainly anything but easy. One of the minor surprises was that most of the titled players played in the three day schedule.  Often, the two day schedule is favored by many of the professional players in an effort to save costs.  Regardless of the schedule, the first two rounds were relatively routine for the top players with just a couple notable exceptions.  IM Mikhail Zlotnikok lost in round one to Raghav Venkat, and FM Yans Girones Barrios surrendered a draw to Ravindra Wijesundera. All the other titled players started 2-0.  For round three, FM Corey Acor had opted for a half point bye, so the top two boards featured GM Sandro Pozo Vera against Quesada Perez and GM Julio Becerra against FM Jorge Leon Oquendo.  Both games ended in draws, but neither was a “GM draw.”  Meanwhile, FM Girones Barrios defeated IM Zlotnikov to catch the leaders and Acor kept pace with the bye, so there would be six players entering the money day with 2 ½ out of 3. On Sunday morning, Quesada Perez had white versus FM Girones Barrios, and he made the most of his opportunity as he won to emerge as the sole leader going into the last round because FM Acor drew with GM Becerra, and FM Leon Oquendo drew with GM Pozo Vera. This setup some last round interesting matchups.  GM Becerra had white versus GM Quesada Perez, and he could tie for first with a win.  On board two, GM Pozo Vera had white versus FM Acor, and FM Leon Oquendo had white versus Truman Hoang.  Any of those players could tie for first, providing Quesada Perez did not win. 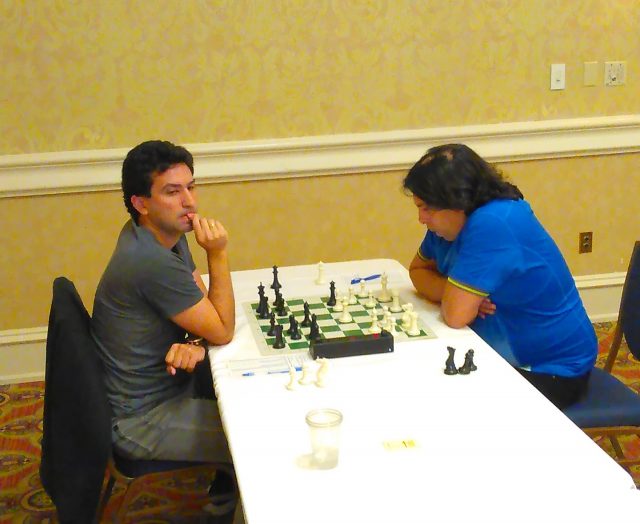 GM Yuniesky Quesada vs. GM Julio Becerra. Photo: Harvey Lerman
Quesada Perez would have been happy with a draw and did offer to repeat the position a few times.  However, Becerra needed the full point.  Becerra pressed as hard as he could and eventually overpressed and allowed Quesada Perez to win and take clear first with 4 ½ out of 5.  Both Pozo Vera and Leon Oquendo won to finish at 4-1 and tie for second.  Girones Barrios defeated NM Nicki Rosenthal to finish at 3 ½ and take clear fourth place. In round 2, Pozo Vera played a nice tactic against Tony Burrus.  Can you find the tactic?

Show Solution Another quick win was turned in by NM Rosenthal versus NM Maldonado. One player who made good use of the re-entry option was Joshua Harrison.  He lost in round one of the three day schedule and re-entered the two day schedule.  He then went 5-0 to take clear first and $1200 in the Under 2100 section! The section winners were: