Getting Back to Business

The third annual Queen City of the Prairie Open and Fort Worth Championship was held over-the-board July 18-19 in Fort Worth, Texas. The highest-finishing Fort Worth resident, Curtis Fukuchi, scored 3 points out of 5 and earned the Fort Worth Champion plaque. The Open section winner, Ryan Amburgy, a 16-year-old from Tulsa, Oklahoma, went 5-0 and got $262.50. 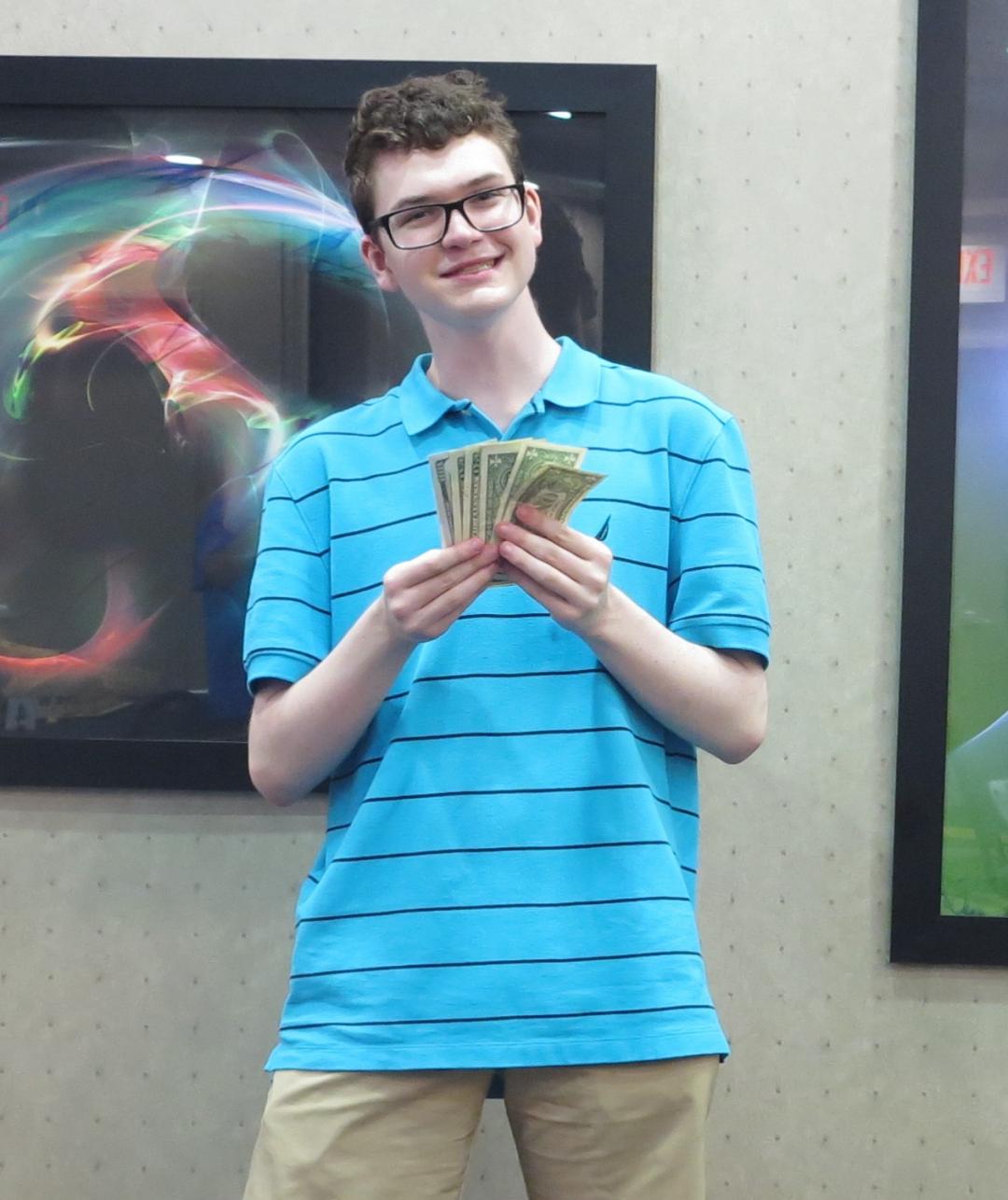 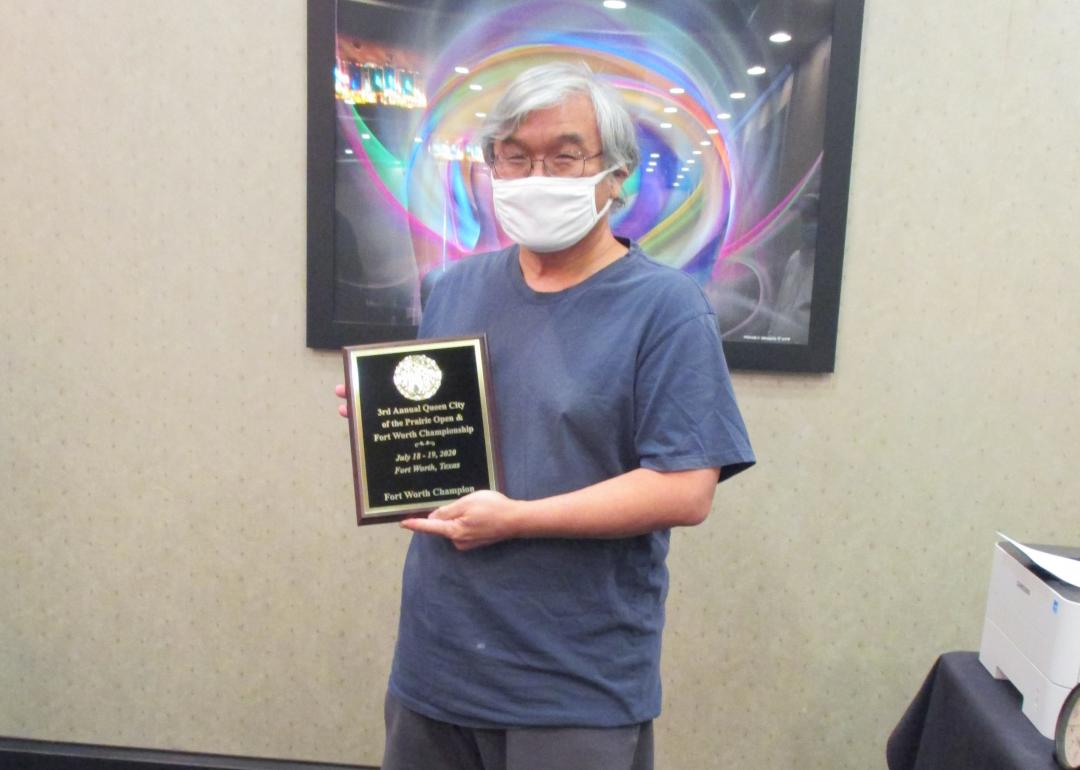 The Queen City of the Prairie Open and Fort Worth Championship was my first over-the-board US Chess-rated tournament since the pandemic began. I had signed up in February, pre-pandemic, after being in touch with the tournament’s organizer and director, Louis A. Reed, Jr. After paying my entry fees for the first two “Queen City of the Prairie Opens,” Reed gave me a free entry this time around.

But my free entry wasn’t for my two past years of loyalty. For the 2020 tournament, the first three players with the CM, WIM, or WFM titles got free entries, with the proviso that the entry fee would be deducted from any prize money. Only two titled players claimed the free-entry offer – CM Tim Steiner was the other.

Some may be wondering why Reed offered free entry for specifically these three FIDE titles. His idea was to attract players with lesser FIDE titles and FIDE ratings below 2200, i.e., players like me! But why?

Reed wanted to rate as many games as possible with FIDE, so he also offered a $5 rebate to FIDE-rated players below 1600. Because of the G/60 (plus 30 seconds increment) time control, any game featuring a player rated 2200 or higher would not have been rated by FIDE. Finding enough players who were FIDE rated, but not too highly rated, was the goal.

For those interested in the nitty-gritty details on how this works, Reed emailed the following explanation:

This regulation is from the FIDE Rating Regulations(B02).

Where at least one of the players in the game has a rating 1600 or higher, each player must have a minimum of 90 minutes.

Where both of the players in the game are rated below 1600, each player must have a minimum of 60 minutes.”

Since the game is assumed to be 60 moves (as per FIDE Rating Regulations 1.1) then the 30 second increment becomes an additional 30 minutes of playing time upon reaching the 60th move thereby achieving the minimum 90 minutes of allocated per player playing time. Even if the game does not actually reach 60 moves, the FIDE requirements have been met.

Where both of the players in the game are rated below 1600, each player must have a minimum of 60 minutes. These regulations are outlined on page 90 of the 2020 FIDE Arbiters' Manual.

There are two additional subtleties which I would like to point out in regard to the structuring of the tournament.

Having multiple players with a sub-1600 FIDE rating will allow some of the FIDE unrated players a shot at earning a FIDE rating if they score at least a 1/2 point. All of these rules all fall under the aforementioned FIDE Rating Regulations (primarily 6.3, 6.31, 7.14 and 7.14a).

My FIDE title is WIM and my FIDE rating is 2025, which meant I had the highest FIDE rating of anyone in the tournament. However, my floored 2000 US Chess rating ranked seventh at the start of the tournament’s Open section.

At the top of the pre-tournament wallchart was Andy Woodward, who turned 10 years old in May. Woodward’s pre-tournament US Chess rating was 2169 and his FIDE rating was 1856. In round 1, Woodward played on board 1 in the 29-player Open section. In round 2, Woodward defeated me (as Black) but then he lost as White in round 3 to last year’s champion, CM Tim Steiner. Steiner lost in round 4 to Ryan Amburgy. Amburgy then won against Shaun Graham in the fifth and final round. Round-by-round pairings for the Open, which used FIDE pairing rules, are available at Chess-Results.com.

Chess is My Death?

This tournament was one of the first over-the-board tournaments played since the emergence of COVID-19 on our shores. The pandemic was that proverbial elephant in the room, looming while we played our games.

In addition to enforcing face-covering, based on a Tarrant County Executive Order, Reed took other safety precautions detailed in this Facebook posting. Nonetheless, I still worried about safety. Before the tournament, I recalled the book title Chess is My Life, used for both Korchnoi’s autobiography and a book about Karpov. I wondered if a book title about playing offline during a pandemic would be Chess is My Death.

During the tournament, I did not hesitate to tattle to Reed whenever I saw players covering their mouths, but not their noses, with their face coverings. One player consistently wore his mask under his nose or chin, perhaps using this Executive Order exception for medical conditions: “The requirement of a face covering does not apply if covering the nose and mouth poses a significant mental or physical health risk to the individual.” I hoped that I would not be paired with, or near, that player. Nonetheless, his exhalations likely circulated throughout the playing site.

“Nearer My God To Thee,” as played by quartet of musicians in the movie Titanic, was my pre-tournament soundtrack. One freelance journalist, Steve Turner, wrote that the Titanic quartet played, even as the ship sank, because its leader, violinist Wallace Hartley, “believed that music could prevent panic and create calm.” Before the July 18-19 tournament, I wished that playing over-the-board chess games would feel calm.

During the tournament, many players thanked Reed for organizing it. William Wenz, from Wisconsin, was particularly grateful. He is about halfway through playing one US Chess-rated tournament in each of the 50 states. The third annual Queen City of the Prairie Open and Fort Worth Championship crossed Texas off his list. 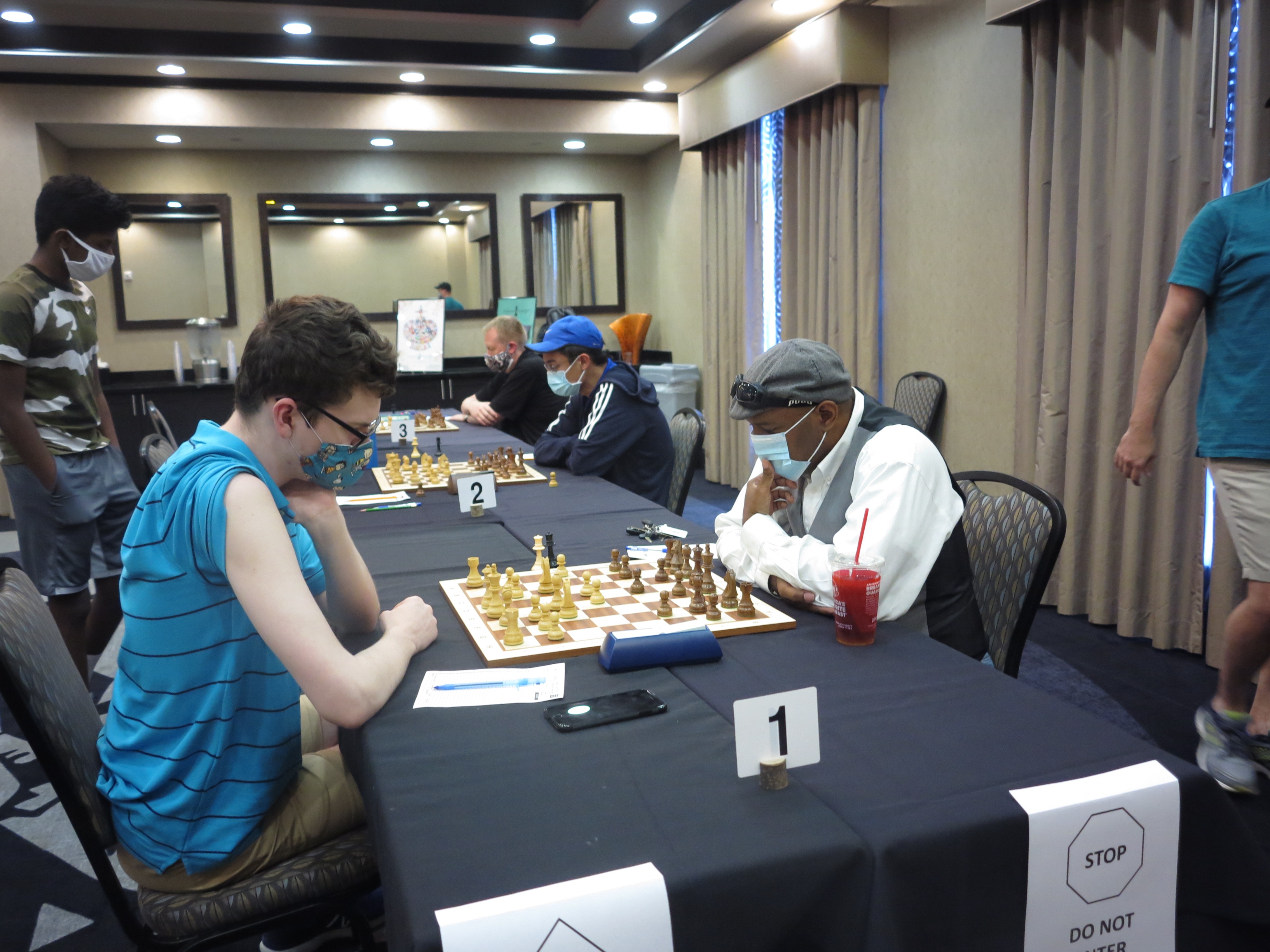 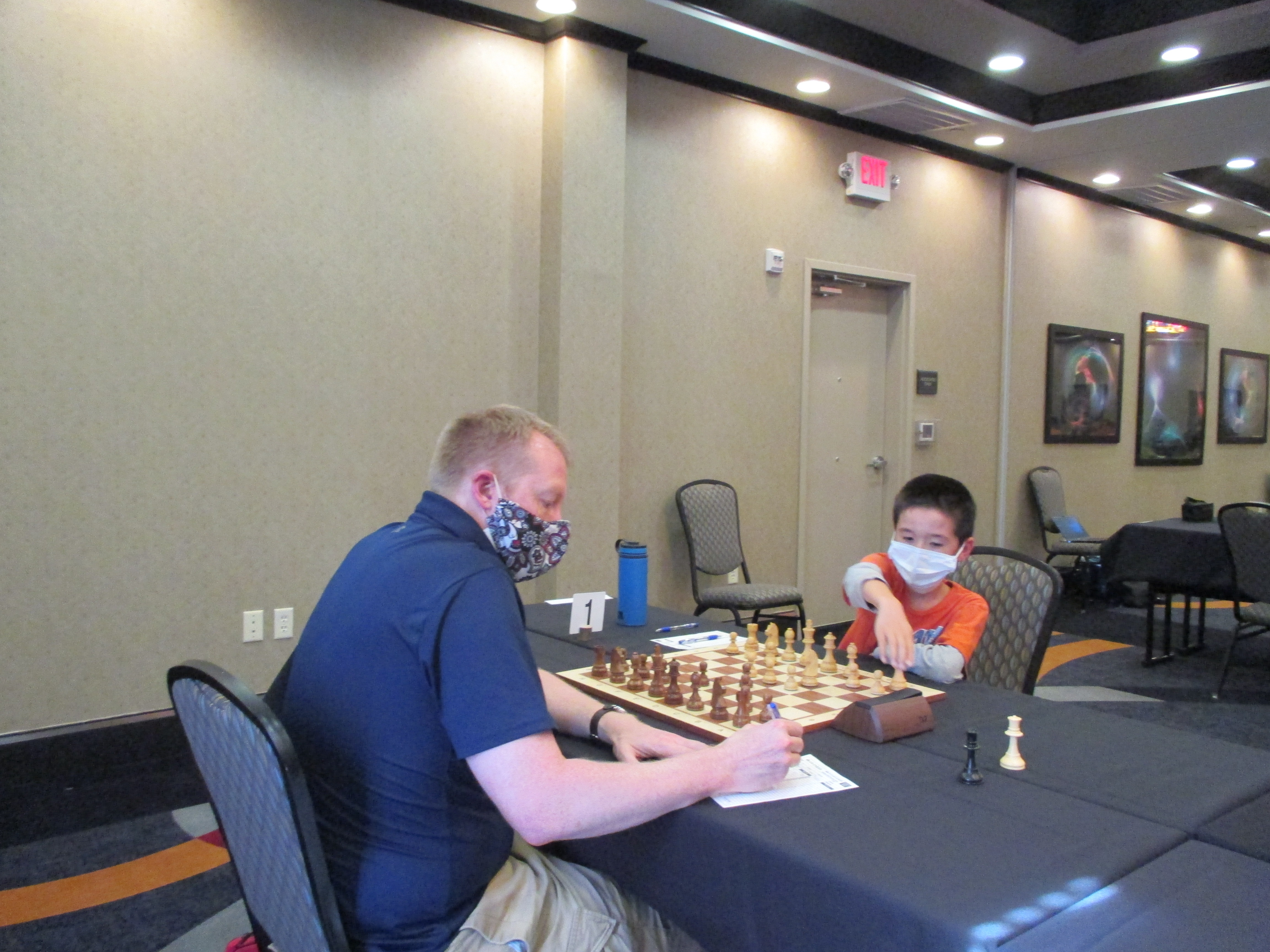 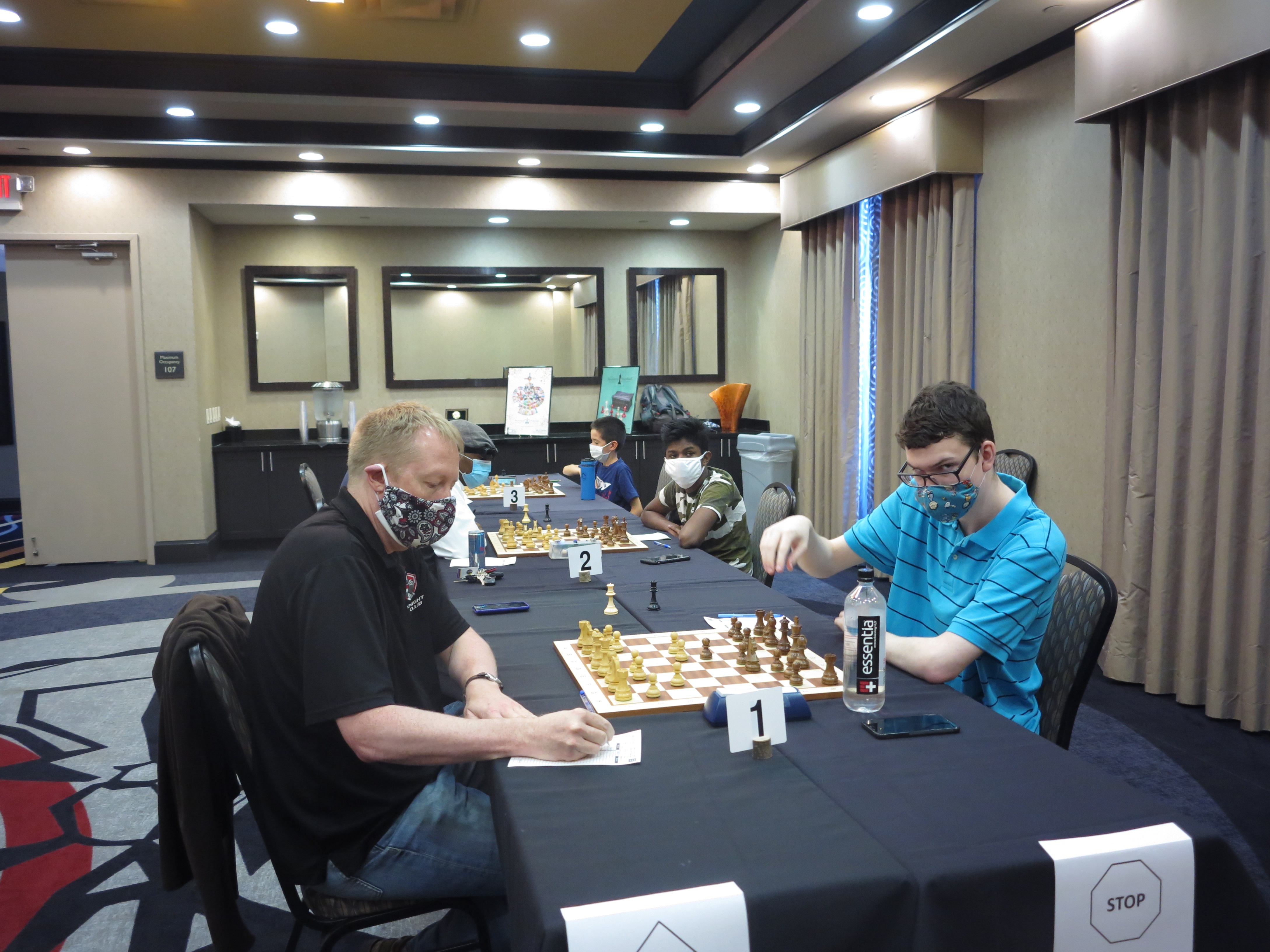 The games Root-Woodward (Round 2), Woodward-Steiner (Round 3), Steiner-Amburgy (Round 4), and Amburgy-Graham (Round 5) were critical to who finished at the top of the Open section.

Ultimately, Amburgy won the Open (5-0), Woodward was second (4-1), and Steiner, Graham, and I, along with Sharvesh Deviprasath and Jim Hollingsworth, were in a five-way tie for 3-7 places, scoring 3.5-1.5.

Final crosstable for the Queen City of the Prairie Open

Final crosstable for the Queen City of the Prairie Reserve