Franc Guadalupe Retires from US Chess

Francisco (Franc) Guadalupe retired December 31, 2017 after many years of service to US Chess. During his tenure, Franc filled many roles, but his most enduring legacy, perhaps, is as US Chess’ Director of Events and one of the country’s best-known tournament directors. 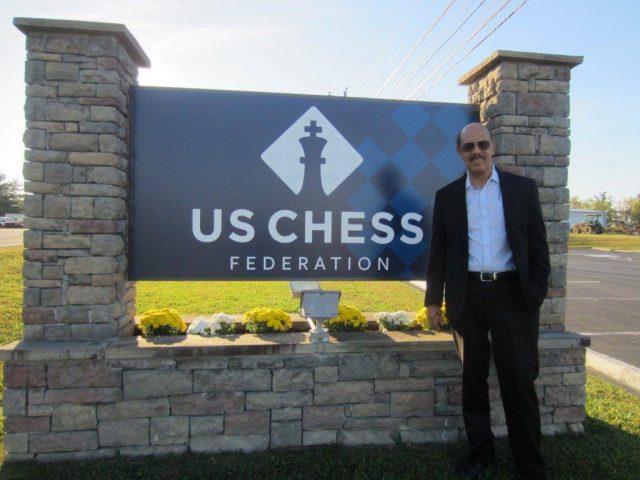 Franc at the US Chess headquarters in Crossville, Tennessee. Photo: Traci Lee
Despite appearances to the contrary, Franc’s path to becoming a respected organizer, national tournament director, FIDE organizer, and international arbiter was far from typical. In fact, he didn’t even learn how to play chess until, as he says, “late in life,” when he was a college freshman in his homeland of Puerto Rico. “Several kids at the dorm were playing chess in the evenings, and I was immediately drawn to the game,” says Franc. “I was just starting my studies in engineering, so the game was a perfect fit for me. I was also intrigued by all the talk from the guys about this other ‘kid’ who was representing us at the World Chess Olympiad in Lugano and in the previous year had won the World Junior Chess Championship held in Israel.” That “kid”—Julio “Julito” Kaplan—inspired Franc, and he sought to learn more about the game and the young man who had emigrated from Argentina four years earlier. “I believe that Julio sparked the interest in chess in many of our college students in Puerto Rico during those days,” Franc says. Franc joined the U.S. Army in 1970, a career move which, combined with college and later raising a young family with his wife, Bonnie, did not leave much time for chess, although he did manage to enter a handful of US Chess-rated events during that period. “As I recall, my initial rating was around 1340 and within four or five events was up to 1631,” he says. Franc didn’t fully immerse himself into chess until much later—when two of his six children became interested in the game. “When my two youngest sons, Thomas (who is now a fire fighter in Houston) and Francisco II (who is an electrical engineer working with Raytheon Missile Systems), were six and seven, respectively, I taught them the game but to me was only just that, a game,” Franc says. “I wanted them to concentrate on school so I did not take them to any rated events until December 2000, when they were in 5th and 6th grade, respectively.” 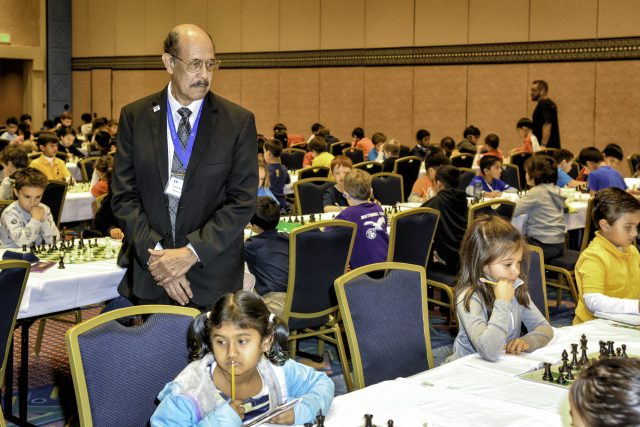 Franc at the K-1 section of the K-12 Championships, Photo Jim Doyle
Because of their interest, Franc started a chess club at his children’s school, Sea Park Elementary in Brevard County, Florida. By default, he had to learn how to organize and direct a tournament. “None of my students were rated players, so I became a Club TD,” Franc says, adding that shortly thereafter, “with the help of others, I started to hold county-wide rated events.” When Franc first began holding rated tournaments, there were only two rated kids in the county. Three years later, Brevard County boasted over 300 rated scholastic players. While Thomas did not play chess for long, Francisco improved rapidly: within two years, he had earned the title of eighth grade national co-champion at the 2002 National K-12 Grade Championships. Francisco repeated in ninth and 11th grades and also went on to earn the US Chess Scholar-Chessplayer Award. Franc continued organizing and directing tournaments, slowly adding national credentials to his local ones. In 2006, US Chess invited Franc to be the Deputy Chief Arbiter for the U.S. Championship as well as the Chief TD for the National K-12 Grade Championships—his first stint as Chief TD for a national US Chess event and the beginning of his lengthy tenure with US Chess. Franc credits his longevity to having the right attitude. “Whenever I was asked to work as a TD, I never asked how much I was going to get paid, nor was I set on achieving titles,” Franc says. “The way I figured, if I did a good job, I would get hired again, and if I was hired again, the titles would come at the right time.” His advice for aspiring TDs is similar. “Learning the rules is relatively easy,” Franc says. “So, in addition to knowing the rules, the keys to becoming a good TD and organizer, I think, are good managerial and people skills, with a lot of good common sense. It is treating others with the respect they deserve, showing that you truly believe in the benefits of chess and expressing your love for the game and the organization, US Chess, that has made all this possible.” In 2009, US Chess returned the love by honoring Franc with the US Chess Tournament Director of the Year Award. 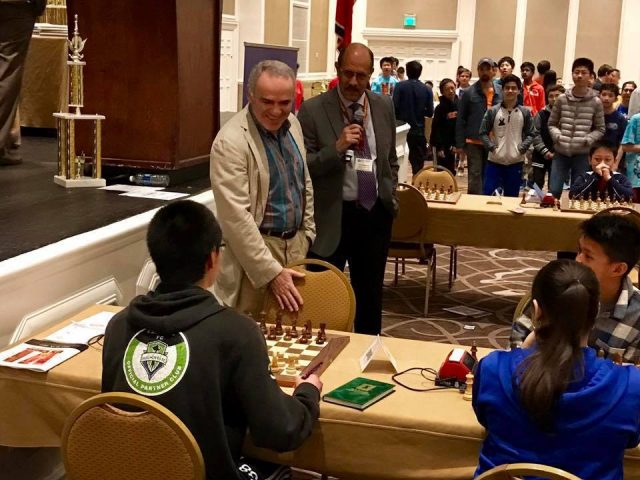 With Garry Kasparov at SuperNationals VI. Photo: Jim Doyle
The following year, the US Chess leadership asked Franc to assume the duties of Zonal President, a position he held until August 2016. “As Zonal President, I had the privilege of representing US Chess at FIDE Congresses in Tallinn, Estonia; Istanbul, Turkey; Krakow, Poland; Tromso, Norway; and Abu Dhabi, UAE,” Franc says. “These travels also allowed me to make many friends from many other countries and with many key members of the FIDE leadership.” In May 2013, US Chess again approached Franc, this time asking him to serve as interim executive director, a position he filled until Jean Hoffman was hired in November of that year. A few months later, Franc was offered the Director of Events position, which he held from June 1, 2014 until his 2017 retirement. Franc admits there were some challenges along the way. “My most memorable and challenging year as a TD was 2013, when I was the Chief TD of SuperNationals V, the U.S. Championship as well as the U.S. Open! That is probably the ultimate ‘TD Trifecta’ of sorts. As the Director of Events for US Chess, organizing the record-breaking SuperNationals VI was probably my most challenging and rewarding event.” 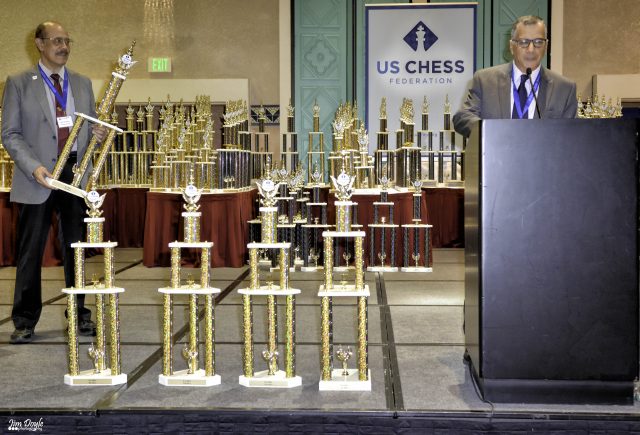 A fun part of the job: handing out trophies!
He’s quick to point out the rewards as well. “Getting the opportunity to be the Deputy Chief Arbiter of the 2016 World Championship match easily ranks as my biggest accomplishment as a FIDE International Arbiter,” Franc says. “That paved the way for upgrading my classification to Category A, the only arbiter to hold that distinction in USA. My friend Carol Jarecki is the only other Category A arbiter living in the U.S. but, under FIDE, she represents the British Virgin Islands.” 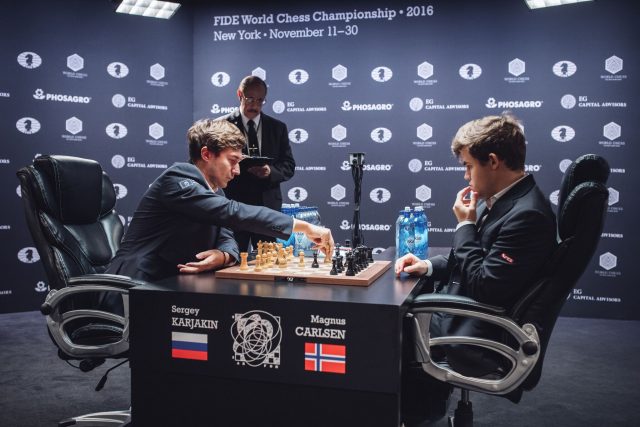 Keeping notation during the 2016 World Championship play-off game. Photo: Maria Yassacova, Agon, nyc2016.fide.com
He continues, “Chess, the game I love, has given my family and me so much and I am very thankful for all US Chess has done for us. My only regret is that I did not start sooner! But if I had, perhaps things would not have turned out the way they did.” He adds, “I am also very thankful to those who mentored me—individuals like Carol Jarecki, Robert Tanner, Harvey Lerman, and other NTDs, as well as IA Panagiotis (Takis) Nikolopoulos, the chairman of the FIDE Arbiters Commission. Chess has given me the opportunity to develop many friendships—Jim Stallings, Luis Salinas and others from UT-Dallas, Tony Rich, Joy Bray and others from the Chess Club and Scholastic Center of St. Louis, the hundreds of TDs I have worked with, the thousands of parents, coaches, and kids who attend our events, and the amazing US Chess staff.” 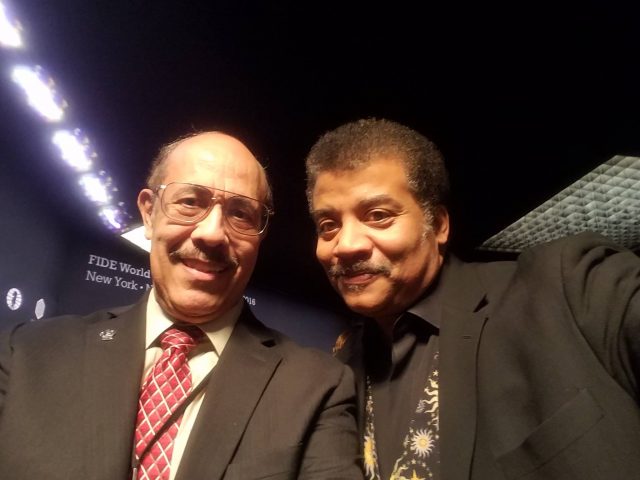 A job perk: Selfie with Neil deGrasse Tyson at the 2016 World Championship (fun fact: Tyson took the photo)
Although the Director of Events torch has been passed into the capable hands of Boyd Reed, many parents and players—especially those whose children grew up playing on the scholastic chess circuit in the past decade—will intrinsically link Franc’s calm and steady demeanor to cherished memories of national tournaments. Fortunately, Franc plans to stay involved with chess. He says, “Although I have retired from the position of US Chess Director of Events, as long as I remain healthy, I will continue working as a TD and organizer, but not as actively as before.” Here’s wishing him a happy and extremely healthy retirement! 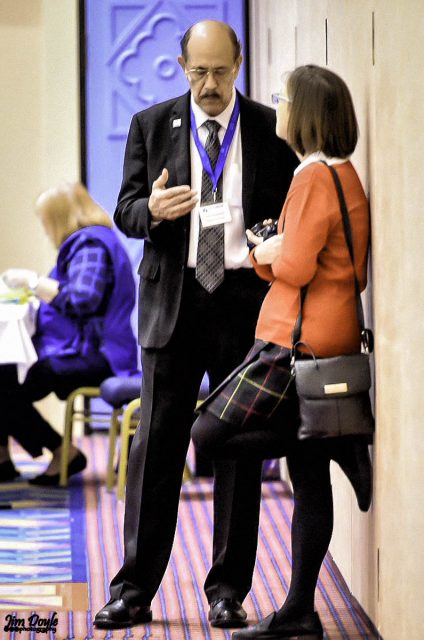