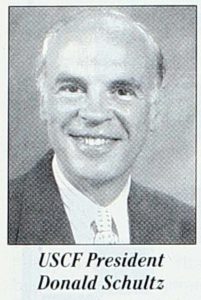 Don Schultz, as seen in the November 1996 issue of Chess Life

While Schultz worked for IBM ‘by day,’ his involvement in chess affairs amounted to more than a second job, especially after his retirement from Big Blue in 1987. Schultz was deeply involved with chess on state, national, and international levels. He served as a state association president for four states: New York, North Carolina, Georgia, and Florida. He was a member of the US Chess board off and on for two decades, and he was a seemingly permanent fixture in FIDE leadership after his 1981 appointment as US Delegate to FIDE. His last FIDE meeting was in 2005. Schultz helped to organize many important tournaments in the United States, perhaps most notably the 1990 World Youth Championships in Fond du Lac, Wisconsin, an event made famous by the documentary “Chess Kids.” Schultz was also a well-known chess journalist. The long-time editor of floridaChess, for which he won awards from the Chess Journalists of America, he was one of the creators of the Cramer Awards for Excellence in Chess Journalism. Schultz was also the author of two chess-related books: ChessDon and Fischer, Kasparov, and the Others. US Chess offers its sincere condolences to Schultz’s family and friends. A full appreciation and obituary will appear in a forthcoming issue of Chess Life.