From March 29–April 2, the Charlotte Chess Center and Scholastic Academy (CCCSA) held its second GM/IM Norm Invitational tournament in the hopes of providing key opportunities for motivated chess masters to achieve one of the necessary “norms” on the path to becoming an International Master or Grandmaster. Last year’s edition of the event was successful, with Alex Velikanov earning his final IM norm, Michael Brown earning an IM norm, IM Safal Bora earning a GM norm, and Matthew Larson achieving the necessary rating gain to achieve his FM title.  As with most invitational norm round robins, the 2016 tournament had two 10-player groups: one for GM norms and one for IM norms. When CCCSA Director Peter Giannatos and I decided to try to maximize norm chances for the 2017 event, we came up with an unorthodox idea to hold three sections (GM norm group A, IM norm group B, IM norm group C).  The organizational hassle of inviting 30 players into three sections (each of which must conform to FIDE’s strict norm requirements) seemed daunting: if someone withdraws last minute from a swiss event, that is an easy fix – not the same for a round robin!  We were lucky that the interest for each invitation was high, and the tournament went off without a hitch. As Alejandro Ramirez explained in his March 2016 US Chess News article, the round robin format is a rarity in the United States.  American swiss tournament grinders are used to doing most of their opening preparation before each open event, having at most 30 minutes to prepare for specific opponents once pairings are posted.  Players also expect to have to amass a very large score to earn an IM or GM norm. Sometimes these title norms are not even valid – the open tournament landscape sometimes allows a player to have a very strong performance, only to be denied a norm due to playing too many lower-rated players, or not facing enough players from foreign federations. However, round robins allow the organizers to have full control over the field and thus fulfill FIDE’s norm regulations.  In addition, players at the Charlotte Invitational were happy to have two weeks to prepare for their specific opponents.  Every norm seeker knew exactly what score they would need to achieve the desired norm – this required score was 6.5/9 in most cases. Amongst the thirty players in the event, there were three GMs, ten IMs, one WIM, 8 FMs, and 7 other masters, for a total average rating of 2433 USCF and 2355 FIDE.  Our invitees had plenty of international experience – there were ten foreign federations represented, in addition to twelve states.  Five players have represented their countries at the chess Olympiad: GM Tanguy Ringoir (Belgium), GM Alonso Zapata (Colombia), IM Aman Hambleton (Canada), IM Roberto Martin del Campo (Mexico), and IM Felix Ynojosa Aponte (Venezuela).  FM Nikhil Kumar, who played in the GM norm group, is the current World Cadet U12 Champion (Batumi 2016). 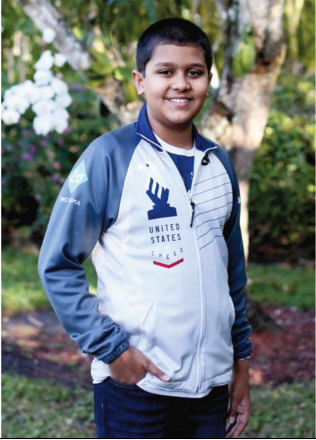 World U12 Champion Nikhil Kumar (picture from Chess Life - March 2017)
In addition to GMs and IMs, the event had plenty of local masters in the field – there were six players from Atlanta (a four hour drive from Charlotte), and two from North Carolina.  Judging from their results, the local players played ambitiously and took full advantage of such a unique opportunity.

In the A group, there were three GMs (Tanguy Ringoir, Alex Fishbein, and Alonso Zapata), four IMs, and three FMs.  Anyone who scored 6.5/9 would earn a GM norm, and IM norms were also available for the FMs.  Famous “YouTubers” IM John Bartholomew and IM Aman “Chessbrah” Hambleton were each vying for their second GM norms. Hambleton started off very strong, with 3/3.  Needing “plus one” from the remaining six rounds, Aman was not able to keep up his dominant performance, and ended in a tie for 3rd-5th with 4.5/9. 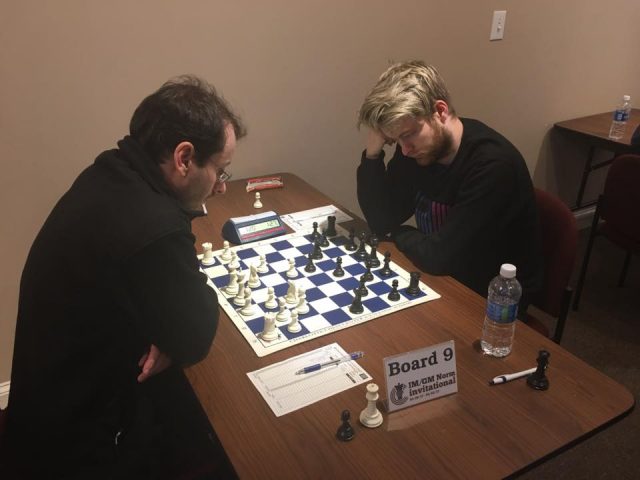 FM Alex Kalikshteyn vs IM Aman Hambleton
IM Michael Brown, who earned his second IM norm at CCCSA’s 2016 invitational and completed his IM title later that year, also had a great start with 3.5/4.  A couple of tough losses in the middle of the tournament reduced his norm chances, but after round 8, Michael had 5.5 points, meaning he would need to defeat the top seed (GM Ringoir) with Black to gain the norm.  Unfortunately, Michael was only able to draw, but with a post-event FIDE rating of 2489 and a 2570 FIDE performance, it is only a matter of time until he gains his first GM norm.  He finished in clear second place with 6/9. Here is his last round draw with Ringoir: The story of the A section was clearly GM Tanguy Ringoir (FIDE 2518).  Last year, Ringoir scored a very solid, undefeated 5/9: 1 win and 8 draws.  This year, he also went undefeated, but scored 7.5/9 (6 wins, 3 draws!).  Despite a few equal and unclear positions during the event, the Belgian GM squeezed the maximum from each game, leading to a dominant score, 1.5 points ahead of second place.  In fact, Tanguy’s massive “+6” score eventually led only two players out of ten to finish on a plus score (Ringoir and Brown).  He was the only player in the A group to remain undefeated. 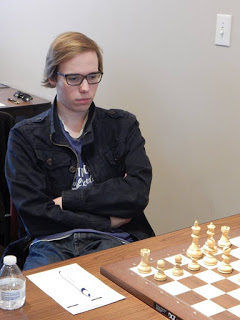 GM Tanguy Ringoir, winner of the A group
Check out GM Ringoir’s recap of his round 1 win against FM Alex Kalikshteyn: Tied for 3rd-5th place with 4.5/9 were the aforementioned IMs Hambleton and Bartholomew (who recovered nicely from a 0/2 start), in addition to FM Gauri Shankar from Chicago.  Shankar earned his fifth (!) IM norm and a healthy gain of 34 FIDE points, pushing him closer to the 2400 FIDE rating he will need to achieve to gain the IM title.

The first of the two IM norm groups had a fair balance of foreign IMs and American norm hunters, two of which returned home with an IM norm certificate.  The top seed, Georgian IM Zurab Javakhadze (2470), managed a reasonable 5.5/9 after losing two games, but he certainly can be happy about playing the “move of the tournament”, which he was happy to analyze in an interview with organizer Peter Giannatos:

Show Solution The tournament was won by Florida’s John Ludwig and North Carolina’s Tianqi “Steve” Wang, who both earned 6.5/9 and IM norms.  Ludwig was the only player in the B group who finished undefeated, yielding a very professional result with 4 wins and 5 draws.  He earns his first IM norm and pushes his FIDE rating over 2400, thus fulfilling two of the four requirements for the IM title.  He defeated his co-champion, Steve Wang, in round 6. Wang rebounded nicely, garnering the necessary wins in round 7 and 8.  His round 7 encounter with Black against the top seed may have been anticipated as a tough game in which a draw would be reasonable, but Wang outplayed IM Javakhadze in a very nice miniature.  Despite his FIDE rating of 2215, Steve earned his first IM norm. 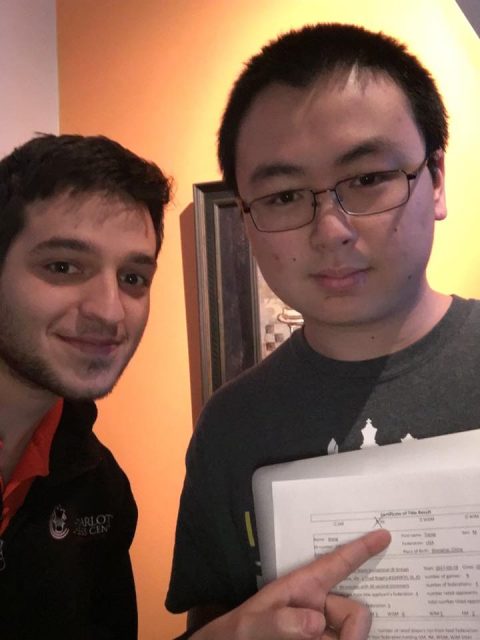 Organizer Peter Giannatos with Tianqi Wang and his IM norm certificate
Honorable mention certainly goes to FM David Brodsky, who started with a tough 1.0/4 result, thus mathematically eliminating him from norm contention, but then reeled off five wins to end on 6/9 and clear third place.

The last IM norm group certainly seemed like it would produce a norm.  Venezuelan IM Felix Ynojosa Aponte, who plays for the UTRGV Chess team, dominated the field with an undefeated 7/9.  However, Atlanta’s Benjamin Moon was consistently on his heels – Moon earned an undefeated 6 points out of the first 8 rounds, including draws with IM Titas Stremavicius and IM Aponte.  Needing only a draw in the last round against IM Angelo Young, Moon was unable to hold his position in a QGD Tarrasch Defense, and thus fell half a point short of the norm.  Benjamin’s consolation will have to be the FM title, as he crossed the FIDE 2300 rating mark after round 7. Moon discussed his round 5 encounter with Canadian FM Yuanchen Zhang in a King’s Indian Defense: 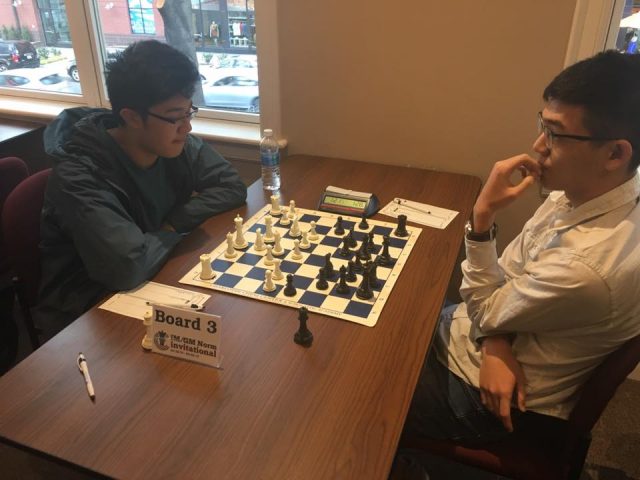 FM Yuanchen Zhang vs Benjamin Moon
Overall, the event was a great success.  Three players (Gauri Shankar, John Ludwig, and Tianqi Wang) earned IM norms, and Benjamin Moon achieved the FM title on rating.  Both Moon and Michael Brown fell half a point short of their desired norms, and there were a few other players who were in the running for title norms going into the final day. Many others gained their first serious international experience in an invitational event.  Alexander Fishbein mentioned that even though he was a GM, this was the first round robin he had played in decades.  Players were very happy with the conditions and venue that the Charlotte Chess Center offered.  After each round, players enjoyed by playing blitz and by watching the US Championships on the TV in the chess center’s library (two of the players, GM Fishbein and IM David Vigorito, had competed in previous US Championships). Be sure to check out the Charlotte Chess Center Youtube Channel for plenty of post-game player interviews and blitz duels between the players.  We hope to be able to run more of these events in the future!  Interested players should contact the Charlotte Chess Center for invitation considerations. Special thanks to Peter Giannatos/Charlotte Chess Center for organizing the event and arbiters Thad Rogers, Grant Oen, and William Nash.  All games, standings, and pictures from the event are posted on www.chessstream.com, courtesy of Chacha Dejava. Grant Oen is the Assistant Director of the Charlotte Chess Center.  He also works for US Chess as the Manager of FIDE Ratings, FIDE & US Chess Titles and Certifications.  He can be contacted at grant@charlottechesscenter.org.
SHARE: