First Lap at Indy US Open 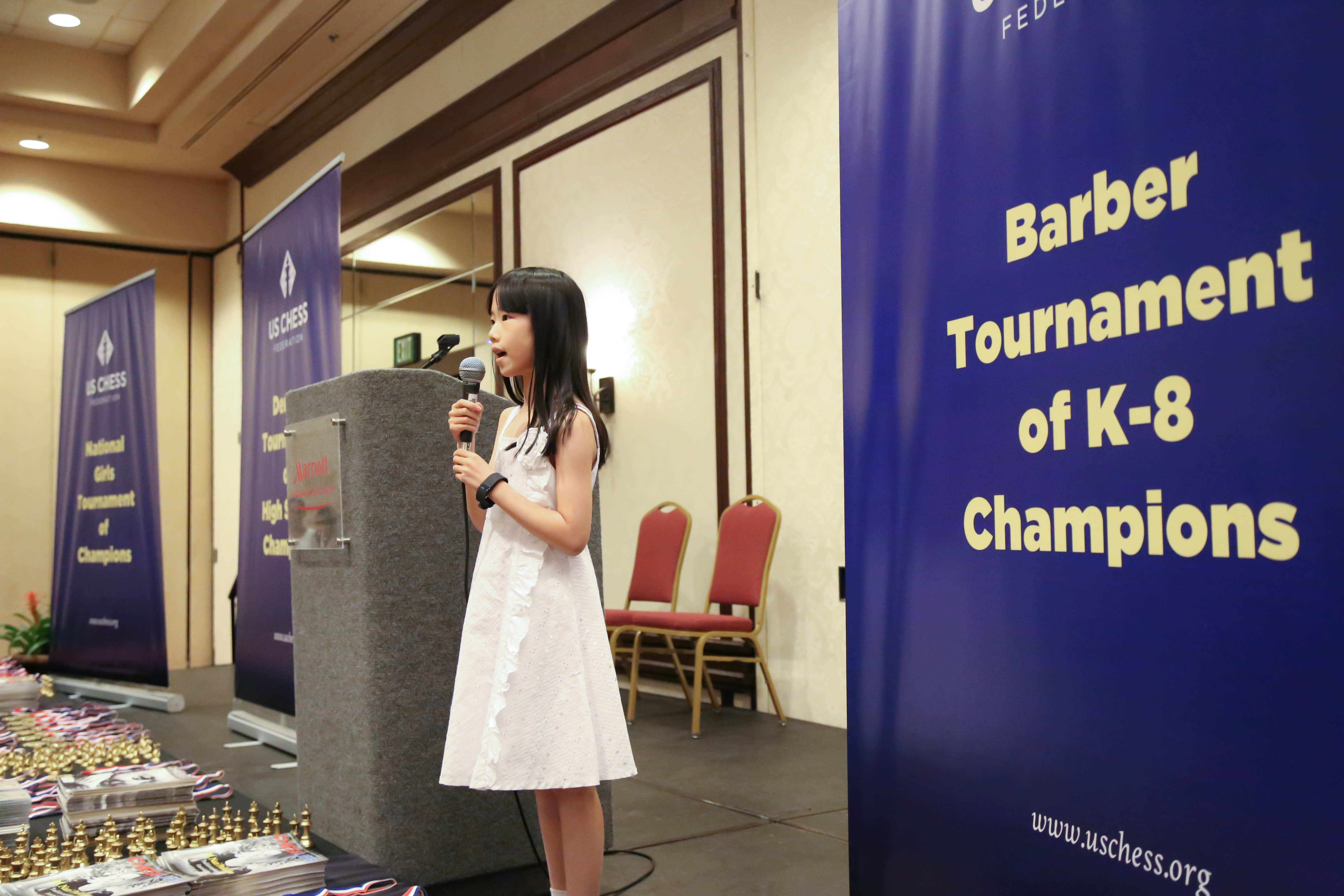 Tiny Joy Cao delivered a big-voice, a cappella rendition of the National Anthem to begin US Open festivities in Indianapolis, rousing the Saturday afternoon crowd that packed the Parade of Champions ceremony at the opening of the Denker tournament of high school champions, Barber tournament of K-8 Champions, and National Girls Tournament of Champions (NGTOC).  The audience applauded a welcome to the 139 state affiliate representatives vying for three $5,000 college scholarships, among other awards. Joy herself is the NGTOC representative from Massachusetts. 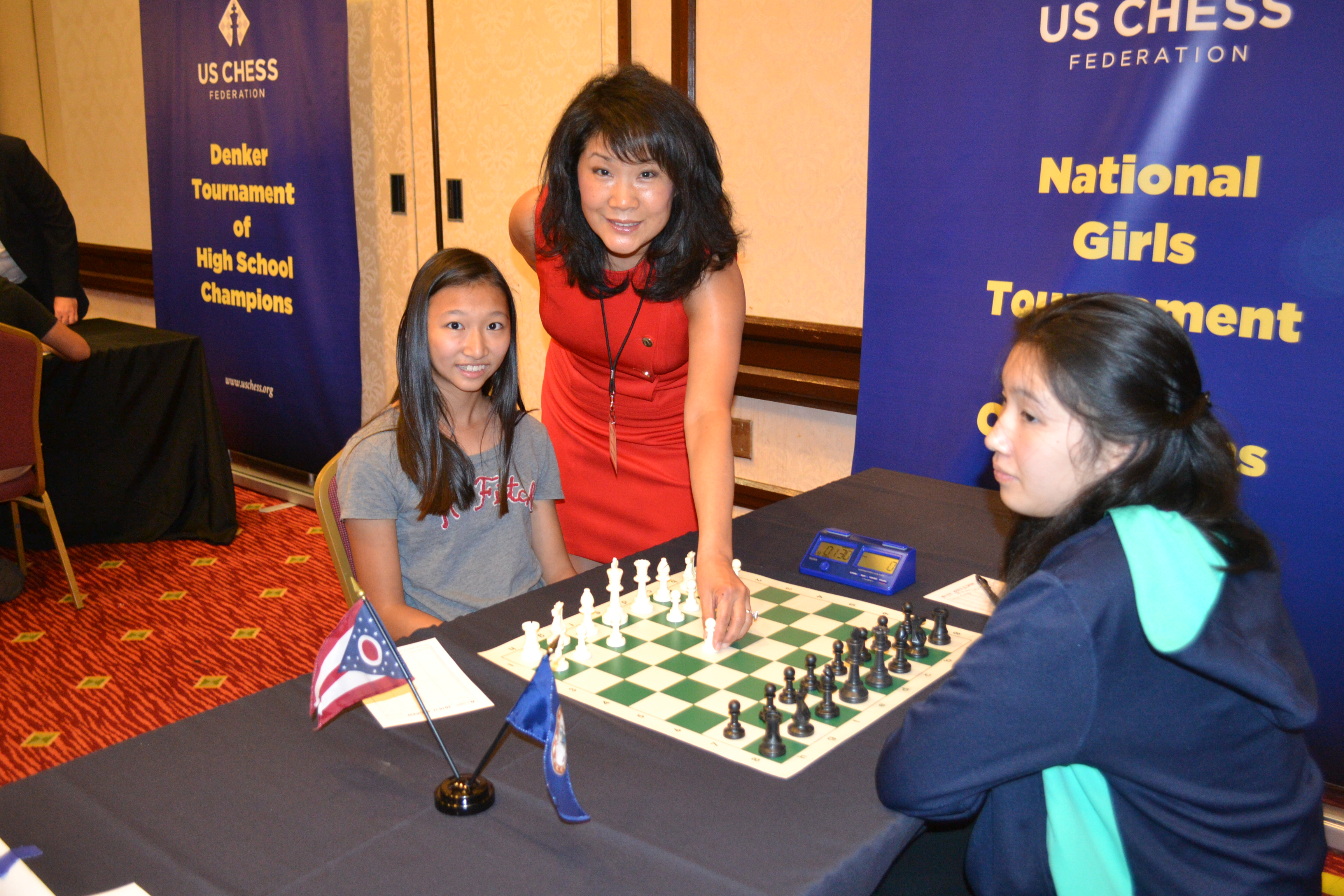 These three junior championships are separate events from the main event, the US Open. The young champions, among them a record-setting 30 master players, maintained their three separate sections but joined the 134 US Open competitors who took the track for the first lap in the traditional, nine-day schedule—one game per night at 7 p.m.—in the Marriott Indianapolis East ballroom. The event may be the chess equivalent of the famous 500-mile auto race held annually a dozen miles away, but the US Open offers a number of different paces. Today’s competitors will be joined by waves of players on Tuesday, when the junior champs finish up, and on Thursday. These later-comers, choosing a six-day or even a four-day schedule, will all eventually play the same number of rounds, nine, but at a far more hectic pace to catch up. All of them join one united section in round 7 Thursday night, everyone chasing part of the $50,000 total prize fund. 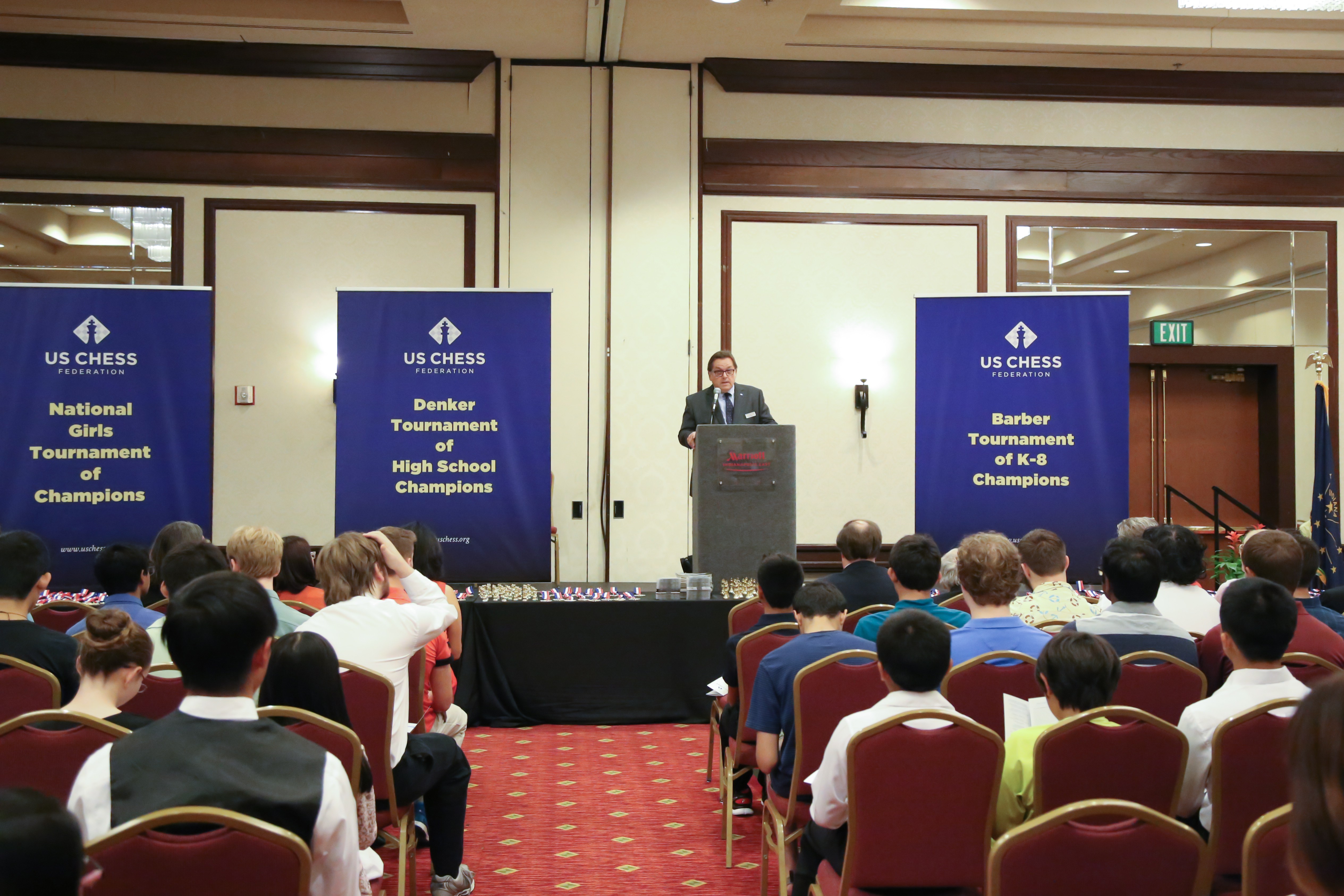 Fidel Corrales Jimenez, Missouri, and Alex Fishbein, Colorado, are the only grandmasters choosing the slow-paced traditional schedule, but they’re sure to be joined by high-powered colleagues. Fishbein won the first Denker Tournament of HS Champions back in 1985. 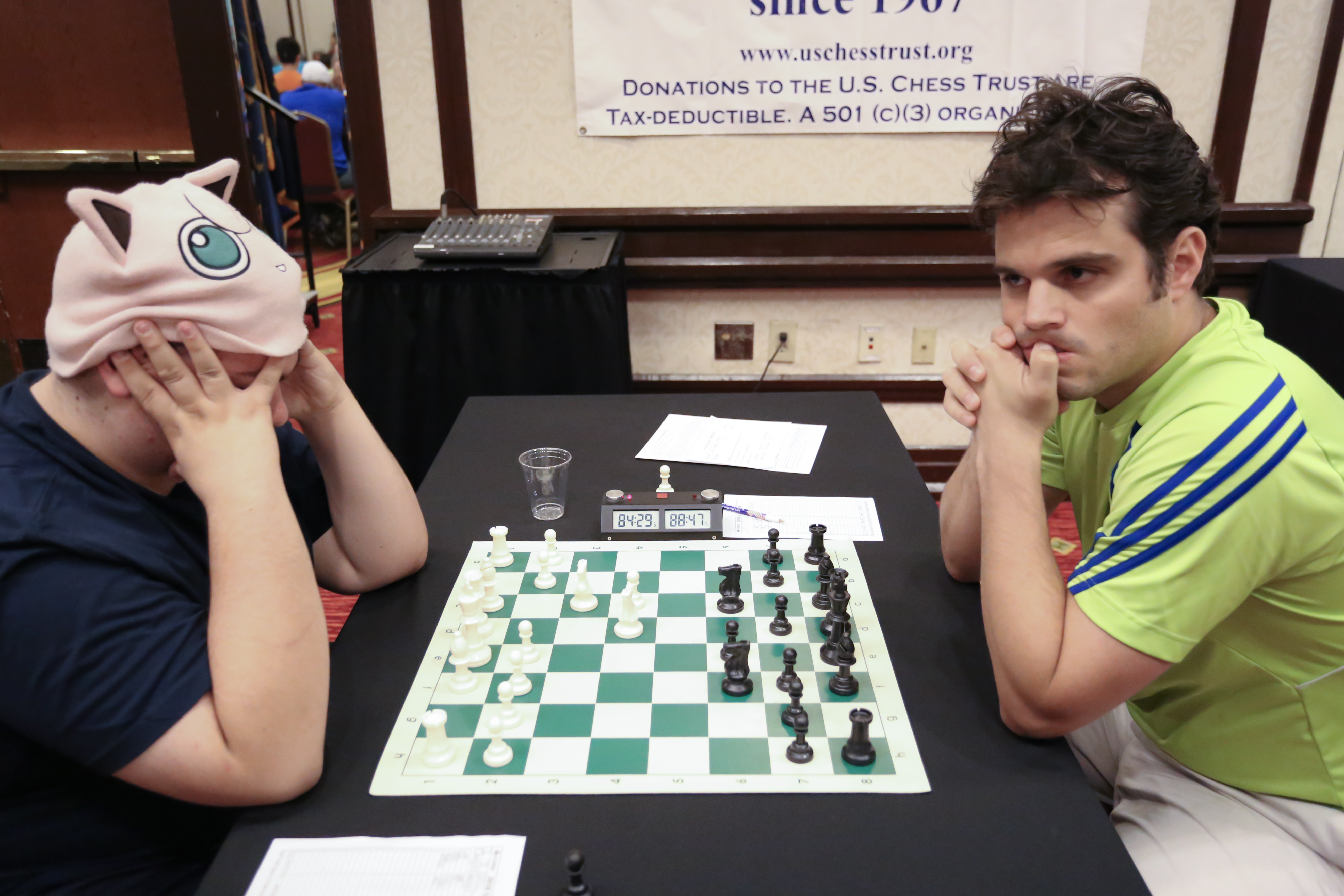 Black vs. Corrales in round one of the US Open, Photo Anne Buskirk

Corrales, who recently graduated with a bachelor’s degree in MIS from Webster University, definitely prefers the traditional pace. “One game a day is enough,” he said. “Three games—wow, that’s too much!” Coralles backed up his choice with a beautiful center-of-the-board mating attack in round one.

The gathering also features lots of one-day side events for those with less time, as well as workshops beginning Wednesday and the Annual Delegates’ Meeting over the final weekend. All the events are sanctioned by US Chess. Printed and electronic game bulletins are available for purchase as low as $10 for the whole event. To subscribe, email Frank Niro at chesssafari@yahoo.com. 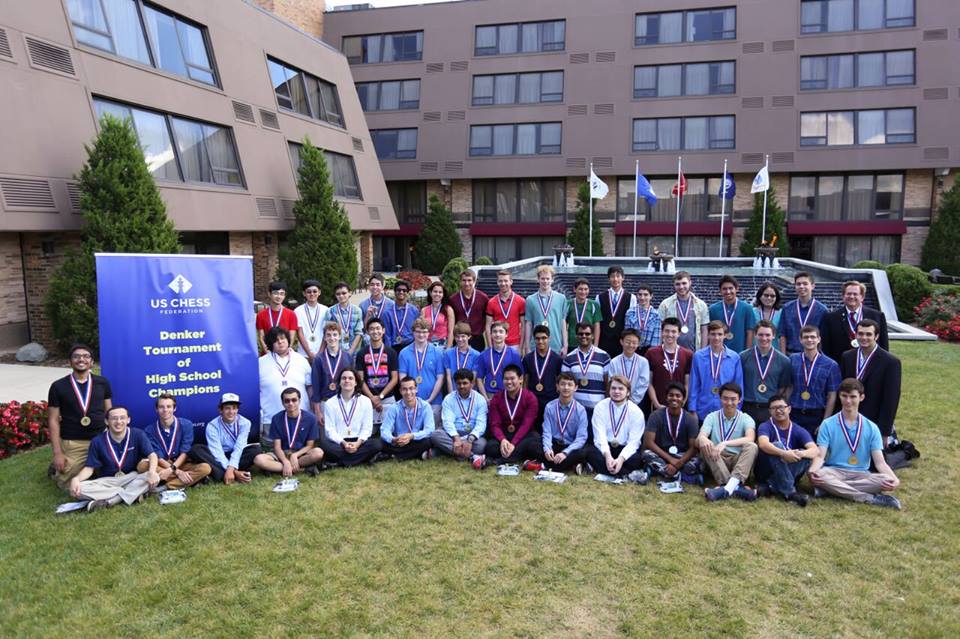 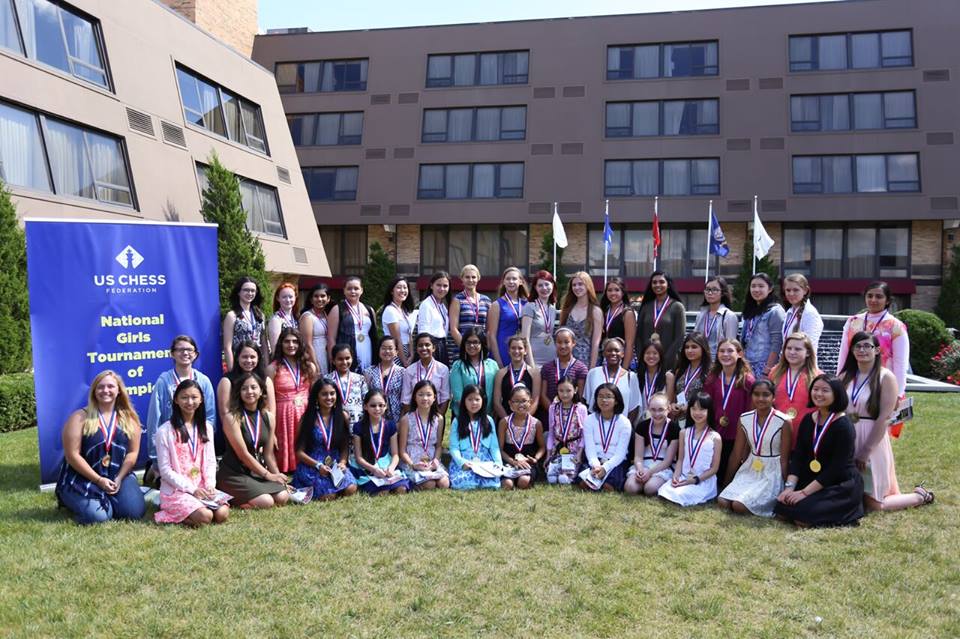 This year all 139 junior champions were issued The Dewain Barber Play It Forward Challenge, invoking each competitor to teach 100 others to play chess in the next 12 months, whether the lessons are personal, in groups, or by video. Those who complete the challenge will be recognized online and at next year’s events. “We need to start developing junior chess from the ground up, using lots of peer teaching and peer inspiration,” Barber said. “Next year we could have 13,900 more kids playing—and they could in turn teach many more.” 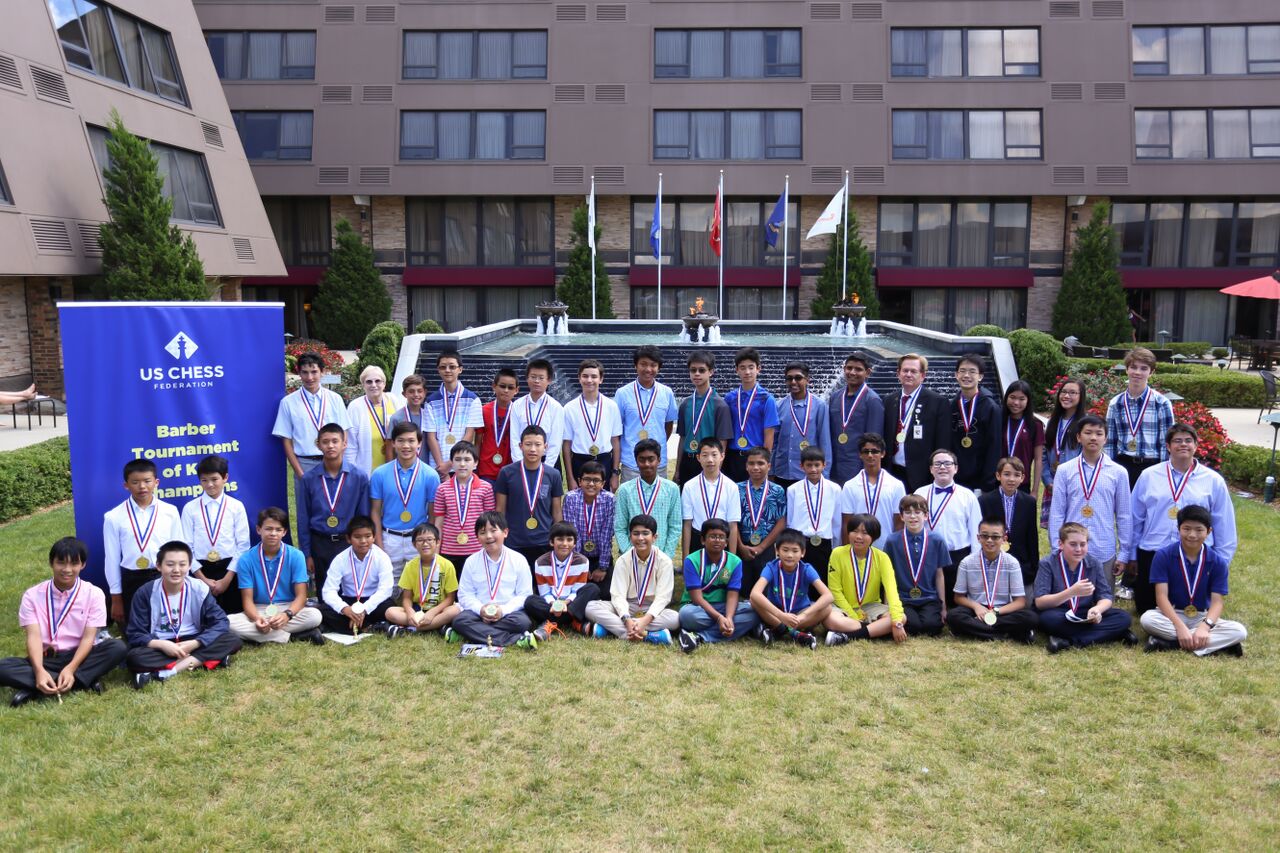 That could give Joy Cao and the rest of us even more to sing about. Follow the tournament standings, pairings and results here on the US Open page. Also follow live updates starting from Pete Karigianis on our facebook and twitter accounts, and get involved using the hashtag #USChessOpen.