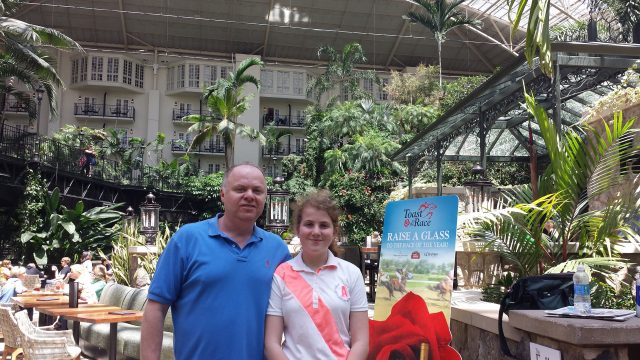 IM Igor Khmelnitsky and his daughter, Nikki, at SuperNationals VI. Photo courtesy of Khmelnitsky
This past Father’s Day, there were numerous chess tournaments held around the country, and what better way for a Father/Daughter to spend time than playing in a chess tournament? Even better is when that Father/Daughter team combine to win the first place Mixed Doubles prize.  That is exactly what happened June 16-18 at the Continental Class Championship, but perhaps in a slightly unusual manner. Nikki Khmelnitsky teamed up with her father International Master Igor Khmelnitsky.  They scored a combined seven out of ten and each won $400.  However, Nikki carried the team scoring four points in the Class C section while her much higher rated father could only manage three points in the Open Section.  In fairness, her father played a GM and an IM.  Last year at this tournament, Nikki was rated 1193.  After this year’s event, she is 1587.  If she continues at this rate, she is going to very soon tell her dad that she is too high rated, and he will have to find another partner because the average team rating has to be under 2200! Igor and his daughter, Nikki, are frequent CCA competitors.  He commented on playing in this tournament Father’s Day weekend:

"As we were looking for a tournament for Nikki to play in June, the Continental Class Championships from June 16-18 in Falls Church, Virginia quickly became our top choice. The tournament was only a three hour drive from the Philadelphia area, it had an Under 1600 section, the Westin is a high quality Hotel, and a the tournament would be guaranteed quality of a CCA run event–-all seemed like good enough reasons to come. However, what really made me commit was the occasion that Father's Day happened to fall on the last day of the tournament. What could be better than spending time and the chess tournament (the game that I loved for 40+ years) with my daughter who seems to enjoy the game? And on top, I would indirectly celebrate my late father Naum, who was born on June 17th 1941. He loved chess and taught me how to play. He was my biggest supporter and critic. He passed almost 20 years ago---way too soon. He would be proud that the seed that he planted years ago continues. My kids, Alec and Nikki, play competitive chess. While Alec shifted his focus to other endeavors, Nikki continues battling on the chessboard, climbing up the rating ladder. I wasn’t planning to play.  These days, I am pretty much content to be a father, a coach, and a driver. I am always happy to chat with other players and parents, and I sign copies of my Chess Exam books. However, since I couldn’t find a suitable (I am picky, like any father!) partner for Nikki for Mixed Doubles, I decided to enter. This wasn’t my best tournament, but with 1 win and 4 tough draws, I managed to get just enough points for our team to win 1st place. Of course, the main force this time was Nikki! In only her second CCA event in the U1600 section, she played tough and ended up scoring 4/5. Here is one of her better endgames":

Both team members also cashed in their respective sections and finished undefeated.  Igor won his first round and then drew with the eventual tournament winner, GM Jesse Kraai, in round two and New York State Champion IM Alex Ostrovskiy in round three.  Unfortunately, he drew both games on Sunday, and, though he won $200 and shared 3rd place, this was surely a disappointing event for him. Nikki on the other hand finished quite strong and had a chance to win the entire event.  After winning in round one, she faced the top seeded player in her section: Laszlo Offertaler.  She drew the game, and this would be the only game Offertaler did not win as he scored 4 ½ points and took clear first in the section.  Nikki kept pace with Offertaler winning her next two games against higher rated players.  She had the opportunity to tie for first, but could only manage a draw in the last round and had to settle for $500.  Her two draws being against the section champion and the other player tied for second, Adam Friedman, netted her 82 rating points! Finally, there should be a tribute to fathers everywhere who supported their children’s chess endeavors.  Fathers teach their children chess, encourage their children, take their children to tournaments and make possible their children’s participation in chess.  On Father’s Day weekend, we celebrated fathers everywhere.  It is wonderful that we can use chess to join in that celebration! The Open section featured an interesting tie for first.  FM Sahil Sinha won all his games.  He started 3-0 and was the only perfect score Saturday night.  Sinha was seeded 7th, but he beat two of his rivals: 4th seeded NM Andrew Samuelson and 5th seeded NM Andrew Zheng.  Sinha could not play on Sunday and opted for two half point byes and 4-1 was good enough for the first place tie. The other co-champion was the top seeded player, but he had to win both games on Sunday to catch Sinha.  GM Jesse Kraai won in round one but gave up draws in rounds 2 and 3 to IM Khmelnitsky and NM Mike Fellman.  Kraai defeated FM Trung Nguyen and NM Zheng on Sunday to finish 4-1.  Because Sinha had the unplayed games, Kraai had significantly better tiebreaks and won the $100 bonus. Going into Sunday’s rounds, Sinhas was 3-0, and everybody knew he would finish with 4 due to the half point byes.  One player had 2 ½ - FM Trung Nguyen.  Seven players had 2-1. They would need to go 2-0 on Sunday to catch Sinha.  GM Kraai was the only one to do so, and he knocked out FM Nguyen in round four. NM Fellman had a great tournament that did not result in any prize money.  After taking a half point bye, Fellman defeated FM Macon Shibut and drew with Kraai and Khmelnitsky.  Being on the wrong end of a last round upset kept him out of the money, but the win and two draws against a GM, an IM, and an FM has to count as a great result.  Fellman annotates his best game which was a fighting draw with IM Khmelnitsky. The winners of each section were: