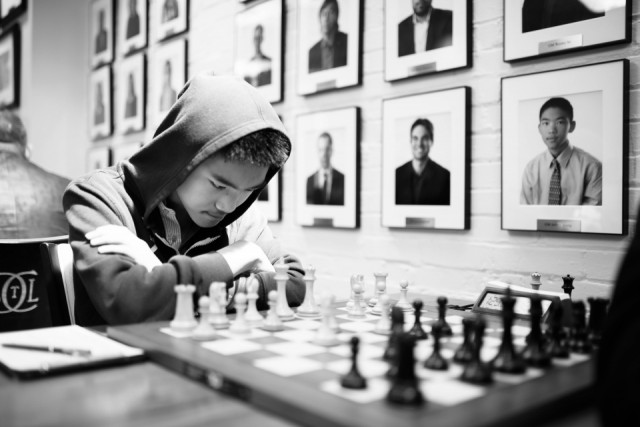 Jeffery Xiong is among the top seeds at the World Open, Photo: Austin Fuller
Philadelphia — Stephen West anticipated he would have a tough time finding a mixed doubles partner here at the 45th annual World Open, so he “camped out” early Saturday morning near the registration desk in hopes of finding one. West had already asked GM Irina Krush, of New York, and NM Carissa Yip, of his home state of Massachusetts, only to learn the distinguished ladies of chess had other plans. “That would have been cool,” West said of being paired with Krush or Yip. West’s hopes were not dashed completely, though. He got lucky when Nimmi Kumar, of North Carolina, arrived to register her two daughters, including 12-year-old Arya Kumar, who says she was weirded out by the whole thing and would have preferred to play with someone she knew. “They didn’t want to do it. I had to convince them,” Nimmi Kumar said of pairing her daughters with mixed doubles partners. “There’s no downside but they think it’s kind of weird.” Of course, there’s nothing weird about walking away with $1500, which the two first place winners of the mixed doubles prize will get here at the 45th annual World Open. Organizers say the premier event of the Continental Chess Association is expected to draw more than 1200 players — which so far include more than two dozen GMs from countries as diverse as Peru, Cuba, Israel and Russia, and a similar number of IMs — by the time the three-day schedule starts Sunday. The event continues through Independence Day. You can follow along with live games at pgn files at http://chessevents.com/worldopen/ The event has drawn an eclectic mix of individuals from near and far, including several who like to sport sunglasses inside — for reasons that range from shielding their eyes from their opponents to being sensitive to light — and at least one player who likes to do calisthenics in the middle of his game. Up for grabs is $225,000 in prizes. With such a high-stakes tournament, one wouldn’t expect to see oddly careless situations such as two opponents recording their Round One game against each other as a win despite each one having scoresheets that showed they lost. But that’s what happened in the U1800 on the six-day schedule. “So each player who was claiming a win produced a scoresheet that shows they lost,” said assistant tournament director David Hater. The situation — which several seasoned tournament directors said they had never seen before — occurred in the below-listed game, when White was about to take Black’s queen and thought his opponent resigned because his opponent had extended his hand. But his opponent thought he checkmated White with Qxg2 and was extending his hand as if to say the game was over, according to Hater. “The problem is his scoresheet shows he was checkmated because he left off the moves Rc7 and Kh6,” Hater said. The situation shows the importance of diligently recording one’s moves. Harold Stenzel, a tournament director, said the incident also shows the importance of clear communication over the board. “When someone extends their hand, you find out why their hand is out,” Stenzel said. Jamaal Abdul-Alim, of Washington, DC, can be reached at dcwriter360@yahoo.com or follow him on Twitter @dcwriter360. Follow the World Open at http://chessevents.com/worldopen/
SHARE: