Day 8 in Rancho Mirage: Once More, with Feeling

Three players lead on 7/8 going into the final round of the 2022 U.S. Open. In a key board one matchup, GM Elshan Moradiabadi held onto a draw against a vicious attacking Najdorf from IM Viktor Matviishen. 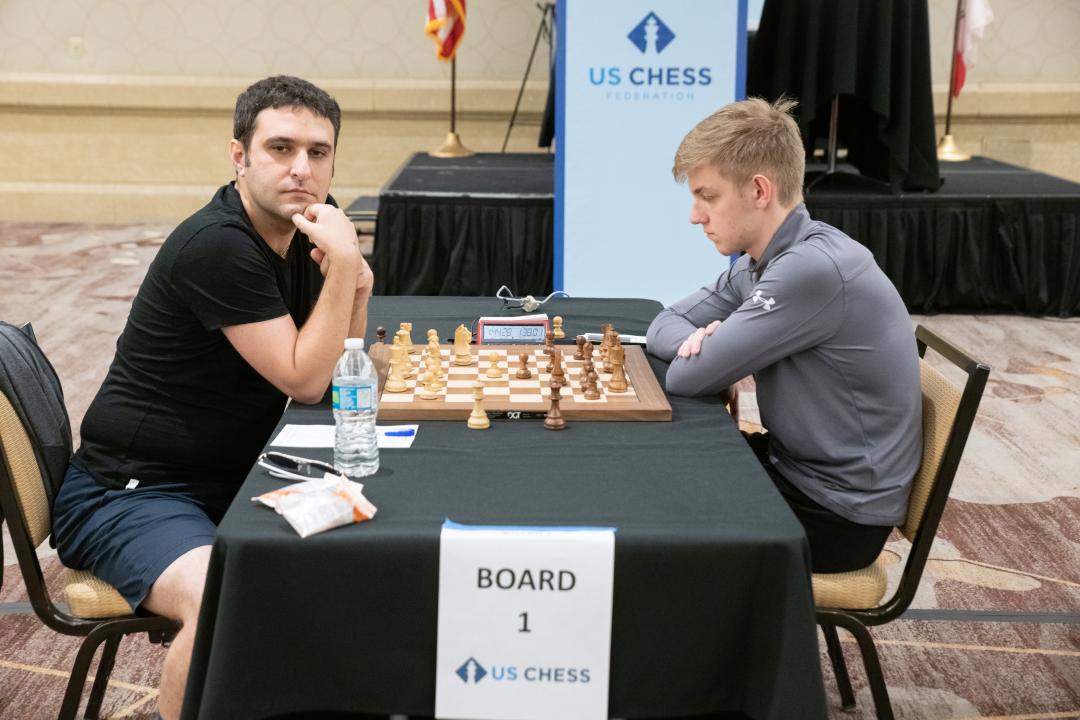 The game took on an unbalanced character early, and after a miscue from Moradiabadi, Matviishen forced him to part with his queen. But one slight inaccuracy just before the time control allowed Moradiabadi to hold a fortress and stay atop the leaderboard. 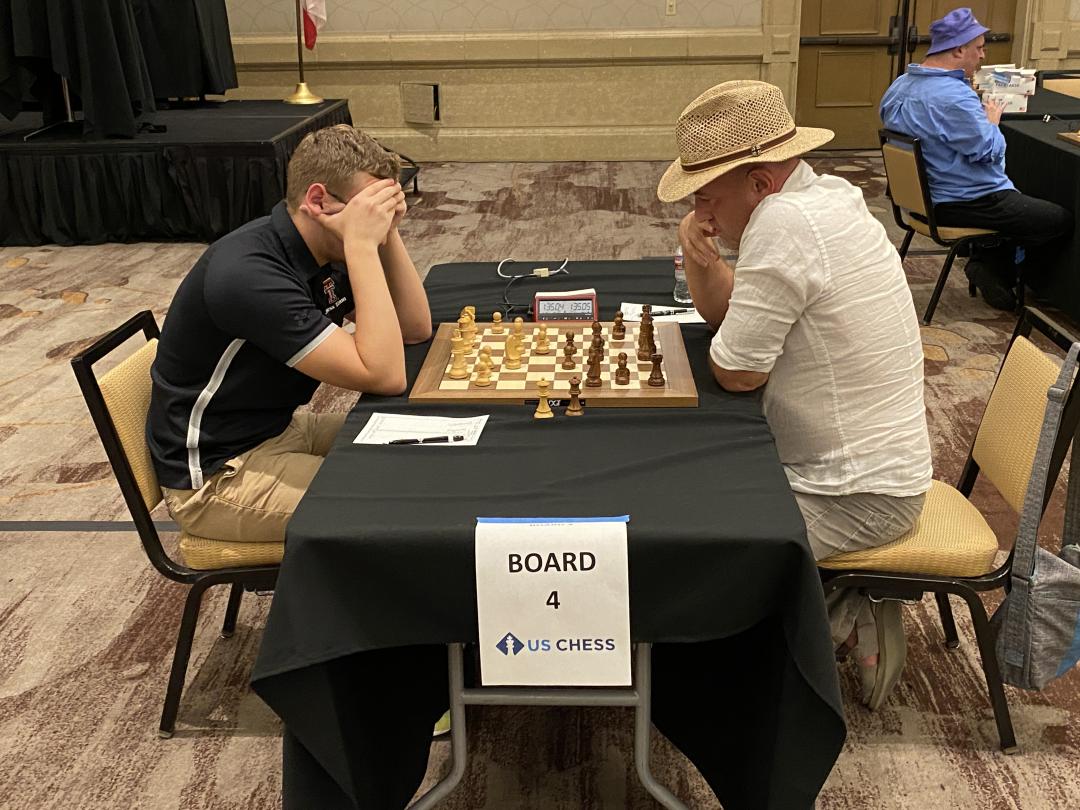 Nine players trail the trio of leaders by a half-point, led by GMs Illia Nyzhnyk and Daniel Naroditsky. 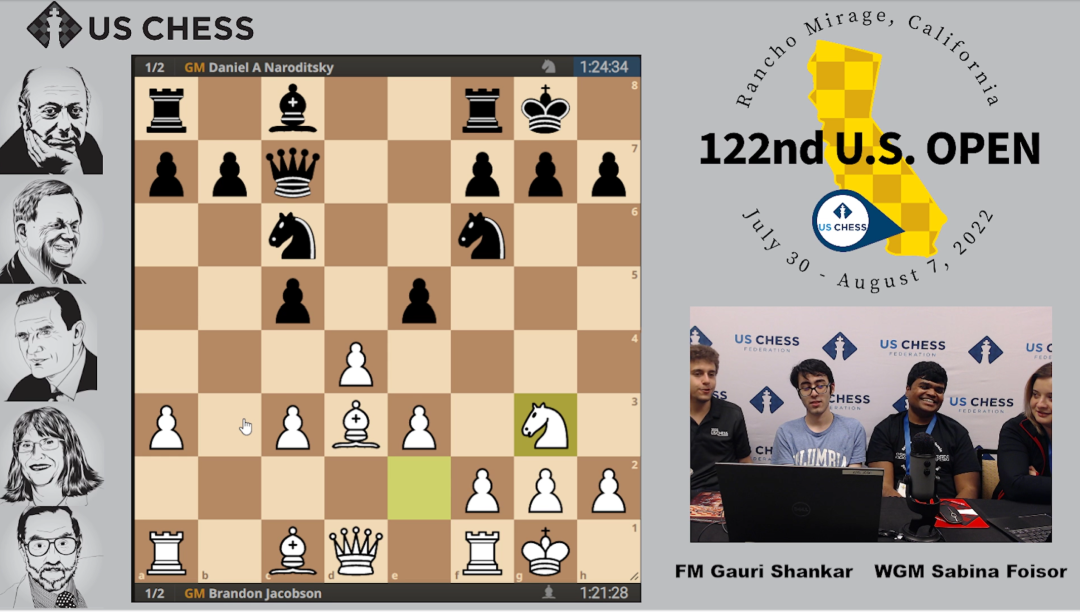 Image Caption
Danya and Brandon came by to discuss their game on the livestream!

While ‘Danya’ drew GM Brandon Jacobson uneventfully with the black pieces, with both players then heading to the commentary room for a bit of banter, Nyzhnyk bounced back into contention with an excellent showing in a Richter-Rauzer against IM Samuel Schmakel. 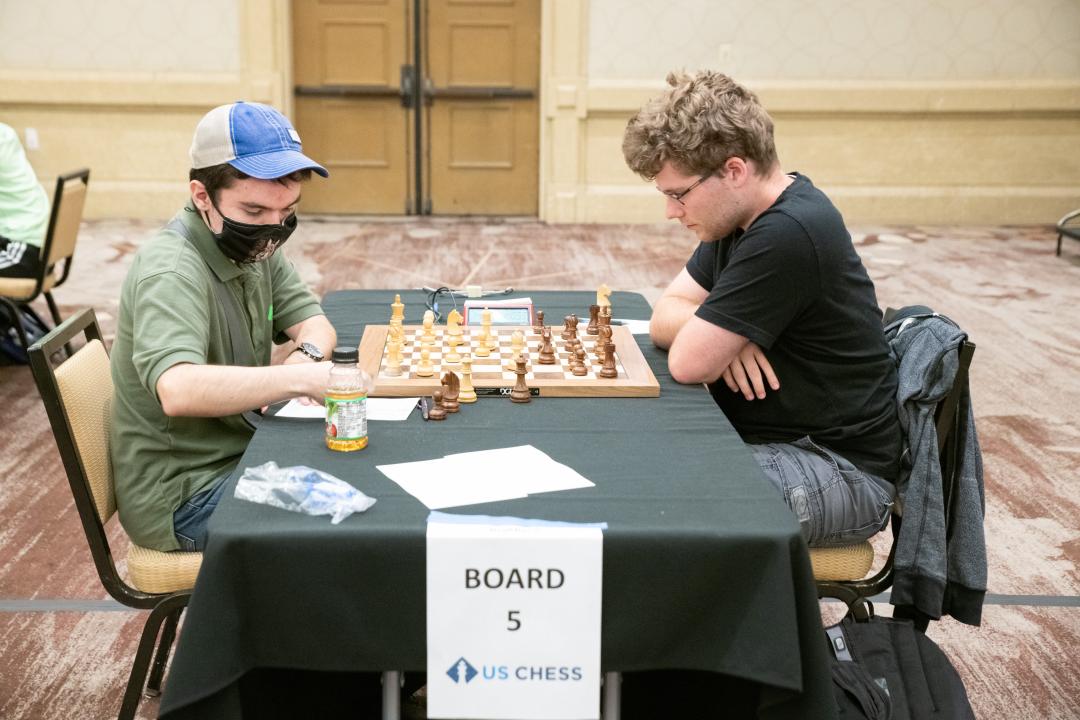 Schmakel did very little wrong out of the opening and yet wound up in a position with no obvious improving moves until Nyzhnyk struck the first time opportunity knocked.

Pairings do not come out for the ninth and final round for a bit, so amateur TDs can speculate on who will be playing whom. The situation becomes more complex when we recall that there’s more than just money at stake here; the highest-finishing U.S. flagged player also wins a seat to the U.S. Championship. Currently that appears to be Moradiabadi at 7, with a number of players (Naroditsky, Var Akobian, Jacobson, Hong, Sheng, Costello, and Eidelman) at 6½. With just one round to go, anything can happen.

Naveen Prabhu is our 2022 US Blitz champion, finishing on a dazzling 13/14 after seven double-rounds of no-increment, no-delay madness. Kevin Yang finished clear second on 11/14.

Last but not least, there is both a closed and open meeting of the US Chess Executive Board scheduled for Sunday. Current and former delegates will be glad to know that the 2022 Delegates Meeting did not require a second day!

The final round of the 2022 U.S. Open begins at 3pm EST, four hours earlier than previous rounds, with coverage on twitch.tv/USChess. Don’t miss out!