Yes, it's January. And yes, this is the December edition of Cover Stories. (Look for the January EP soon!) 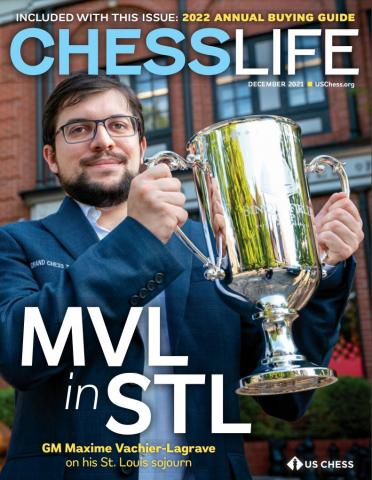 GM Maxime Vachier-Lagrave is the author of our December cover story, “My American Tour,” which discusses his victory at the 2021 Sinquefield Cup and his second place finish at the 9LX (or 960) tournament directly afterwards.

We’ve been trying to set up time for an interview for a few weeks, but Maxime’s packed schedule meant that today – January 2nd – was our first opportunity to record. It turns out that this was fortunate indeed, as in the interim, Maxime played in a number of events, including the World Rapid and Blitz Championship in Warsaw, where he became the FIDE World Blitz Champion.

We discuss his victory in the Blitz, his visit to Dubai and thoughts on the World Championship match, and his long sojourn in Saint Louis. We also learn about his openings, his technical setup while traveling, his time on the Carlsen team in 2016, and his ongoing love of mathematics.