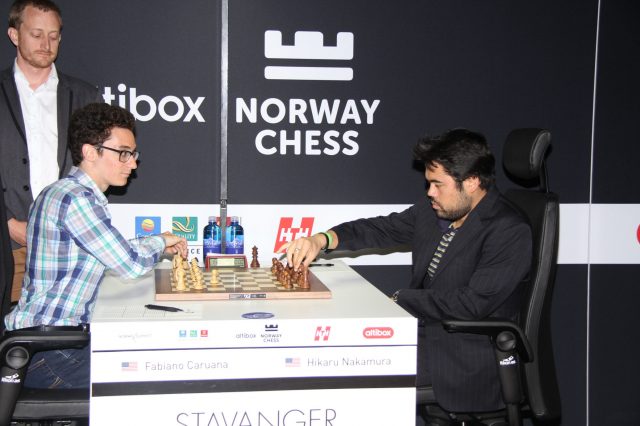 Fabiano Caruana vs. Hikaru Nakamura, Photo Cathy Rogers
Three US Amigos Star in Norwegian Supertournament Stavanger, the fjordland home of the Norway Chess supertournament, has a spring in its step again, and so does Fabiano Caruana. After a dramatic final round, the sixth edition of Norway Chess ended in victory for the 25-year-old American. For the second time since qualifying to challenge for the world title two months ago, Canuana finished ahead of World Champion Magnus Carlsen at a major tournament and for the third time in 2018 a big finish enabled Caruana to run down his rivals. Home to the Norwegian oil industry, Stavanger, like Caruana, peaked in 2014 and then suffered a mini-recession after the oil price dropped dramatically between 2014 and 2016, witnessing job losses and business closures. 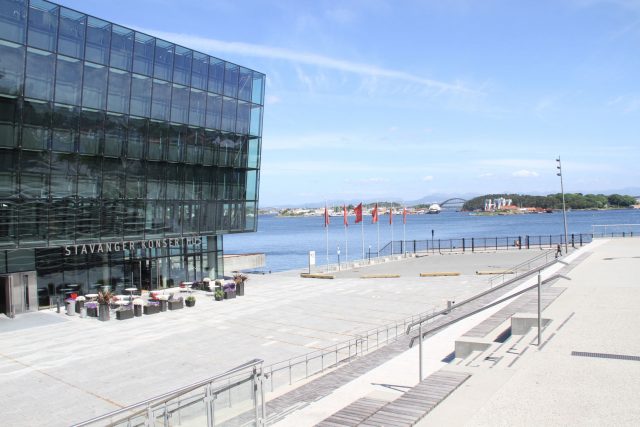 As the oil price has recovered, so has the city, and this year’s Norway Chess also enjoyed unseasonably warm spring weather. The rare sunny seasons also show up Stavanger’s astonishing variety of street art, displayed on everything from city centre walls to oil silos. (For 17 years the NuArt Festival in Stavanger each September has been encouraging artists around the world to find a blank wall and create art on it.) The improved economic situation enabled the tournament to attract some new sponsors in addition to the naming rights sponsor, cable television company Altibox, which was in the final year of their three year contract with Norway Chess. 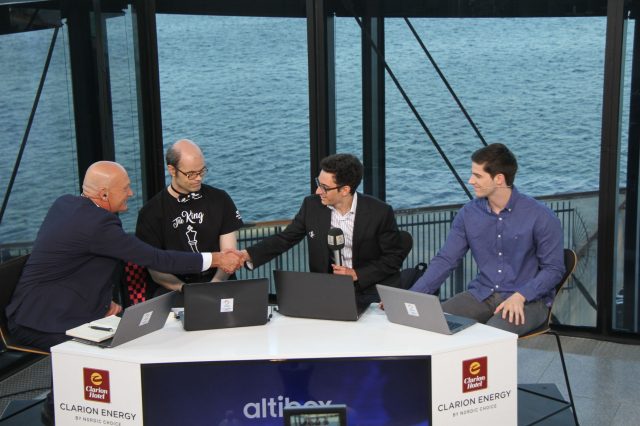 Fabiano Caruana on TV2, Photo Cathy Rogers
A budget of 7 million kroner enabled the organisers to bring together the strongest field of 2018, with former World Champion Viswanathan Anand, the world number 13, the lowest seed among the 10 players. The three best US players were all participating, with high hopes for Fabiano Caruana in particular given his stellar form post-January 2018. The 2018 Norway Chess tournament had everything: a player withdrawing due to injury, a cooking competition, the first defeat  for Carlsen in 2018, and a final round which saw four co-leaders apparently headed for a giant playoff. The start of the rounds was delayed until 16.30 on request of TV2, who wanted to show their hours of chess coverage in prime time. Unlike golf and cycling, which have to pay broadcasters for airtime, in Norway, chess is a sport where rival television stations bid for events in which World Champion and local hero Magnus Carlsen competes. (TV2’s rival NRK – also present in Stavanger - has won the rights to host the November World Championship match between the reigning titleholder and Caruana.) As expected, Carlsen made the early running in Stavanger, beating Caruana in the first round preview of November’s title match. By round three Carlsen was a point clear of the field but then he slowed down. Unfortunately the same did not apply to Chinese star Ding Liren, who took a corner too fast on his cycle around the fjords on the first rest day and found himself with a broken hip and needing an operation. Ding did not play another game and was on crutches and a flight home to China soon thereafter. Since Ding had played fewer than half the games, his score was annulled and six players found themselves with extra free days. Then, after a run of draws, Wesley So threw the tournament wide open in the sixth round by inflicting Carlsen’s first classical loss in 2018 and scoring his first win against Carlsen. 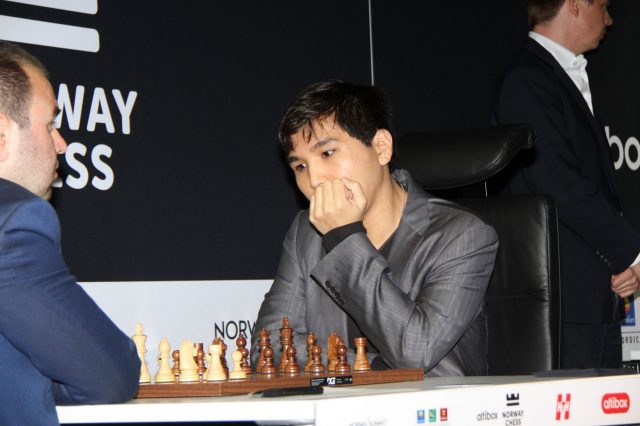 Grandmaster Wesley So
The day before their game, when asked about his coming clash against the young American, Carlsen opined, "To be honest, usually nothing happens in these games. I can't remember him ever being close to beating me. If I want a draw, I will often get it easily." Famous last words... As the tournament moved from the Clarion Hotel to the grand Konserthus in the centre of Stavanger, So and Carlsen were tied for the lead, joined a round later by Anand. 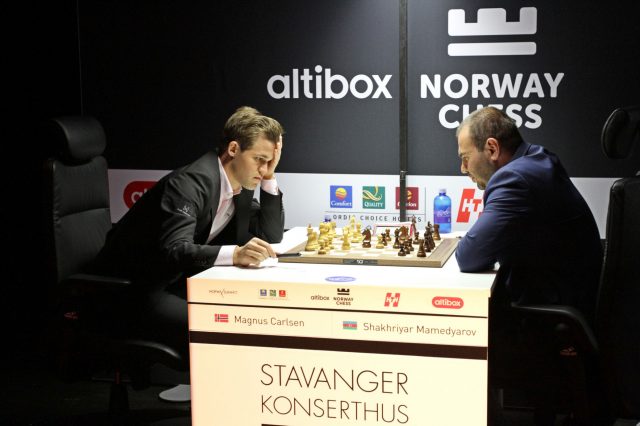 Carlsen vs. Mamdeyarov, Photo Cathy Rogers
Then in the penultimate round both Caruana and Nakamura joined the leading party, Nakamura demolishing Sergey Karjakin and Caruana knocking down Anand. The critical moment in Caruana’s crazy game against Anand came on move 45. 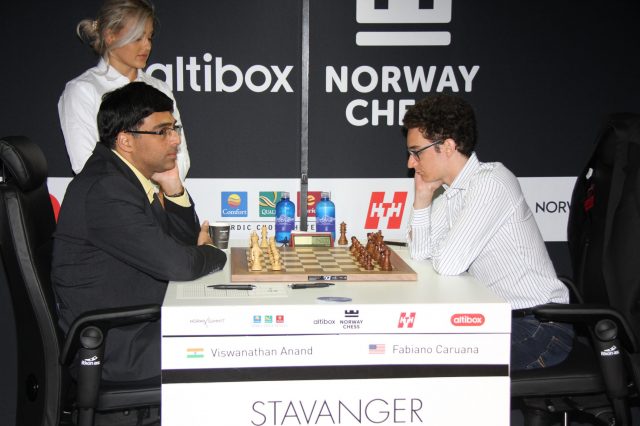 Vishy Anand vs. Fabiano Caruana, Photo Cathy Rogers
In the final round Carlsen took a 20 minute draw against his former second Maxime Vachier-Lagrave and waited to see if any of the three US players could overtake him by winning their last game. Earlier in the tournament Carlsen had accused Karjakin and Mamedyarov of prearranging draws in earlier tournaments. Mamedyarov readily admitted that he had prearranged draws in the past, notably against his teammate Teimour Radjabov, but noted that if two players really wanted to draw it was hard to stop them, prearranged or otherwise. The ‘game-fixing’ affair became a minor scandal in the Norwegian media but after Carlsen’s last game it had to be reluctantly accepted that (a) prearranged or not, short draws were indeed hard to stop, and (b), sadly for Norway, short draws rarely win tournaments. Nakamura was the next to be stuck on 4.5/8, offered no chances by Levon Aronian. That left the other two US amigos fighting each other for all the marbles – and fight they did. 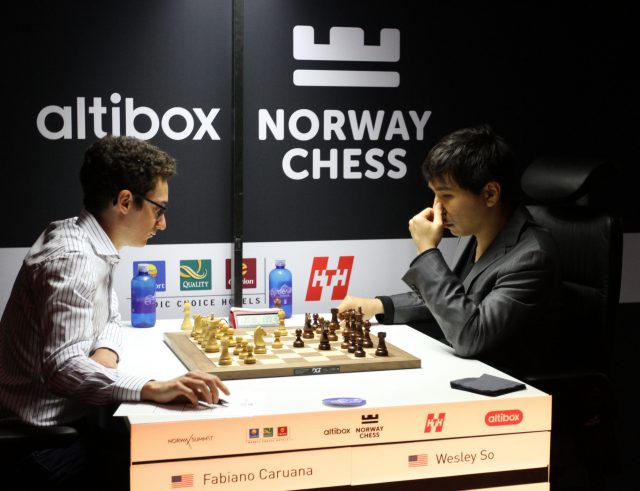 Fabiano Caruana in a nail-biting final game against Wesley So, Photo Cathy Rogers
The drama came to a head as the players neared for the first time control, with the diagrammed position reached after Caruana’s 38th move. With this win, Caruana confirmed his reputation for winning clutch games, inched a little closer to the world number one ranking that Carlsen has held for six years, and secured the 75,000 Euro first prize – So had to settle for 18,000. “[This year] I’ve played well at times and badly at times, but somehow I have always managed to come through,” said Caruana. November’s world title match should be something to see. 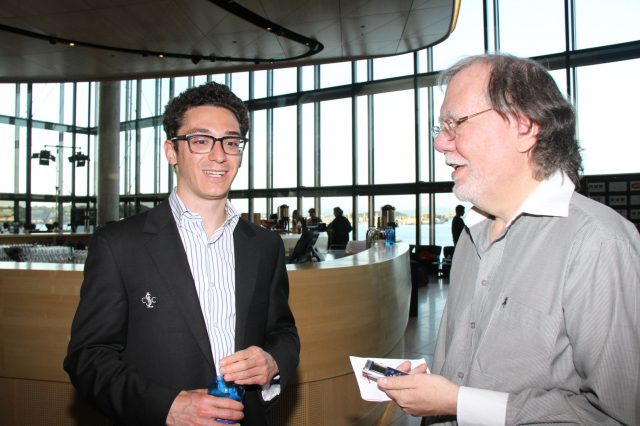