Editor’s note: 13-year old IM Christopher Yoo is one of America’s brightest young talents, and one of our most active junior players. Like most of us, he is trying to find ways to continue to play and improve during the COVID-19 pandemic. Yoo was one of 34 American players to compete in the Sunway Sitges International Online Chess Open, one of the first events to be played online at classical time controls. He graciously accepted CLO’s offer to chronicle his tournament experience, which was a most fulfilling one. He was part of a nine-way tie for first place with 7/9, and finished in fourth place after the 16 player blitz playoff, picking up the top Under 16 award along the way!

I played in the Sunway Sitges International Online Chess Open without many expectations. Group A had 15 GMs and my 2455 FIDE rating made me the 23rd seed in a field of 224 players. This was my first online tournament at a classical time control, but I heard it was a first for everyone because no one had held an online event like this before. The tournament was 9 games of G/90 +30 over 9 days with a blitz playoff on the 10th day to determine the top 16 places. The tournament got off to a rough start as the first two rounds had to be postponed because of technical difficulties. But that was actually kind of lucky for me because I had been planning to take two quick draws or even two 0-point byes in the first two rounds because I was playing for the US in team event that weekend also. As it was, I only had to take one early draw.

Round 1:  I offered my FIDE 2000-rated opponent a quick draw. He thought for a while and accepted the draw. That was lucky for me because otherwise I would have had to resign because I had no time to play the game. 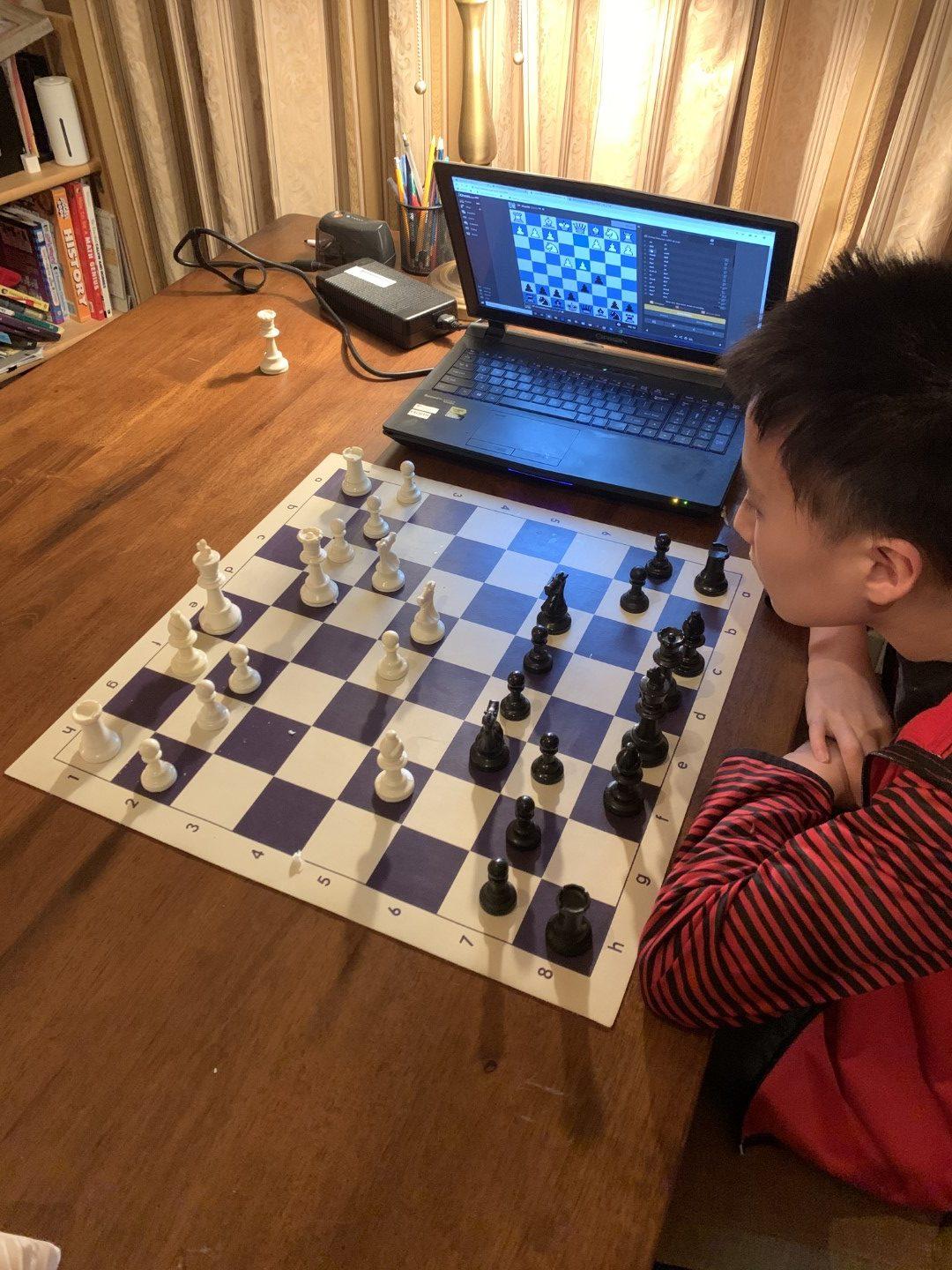 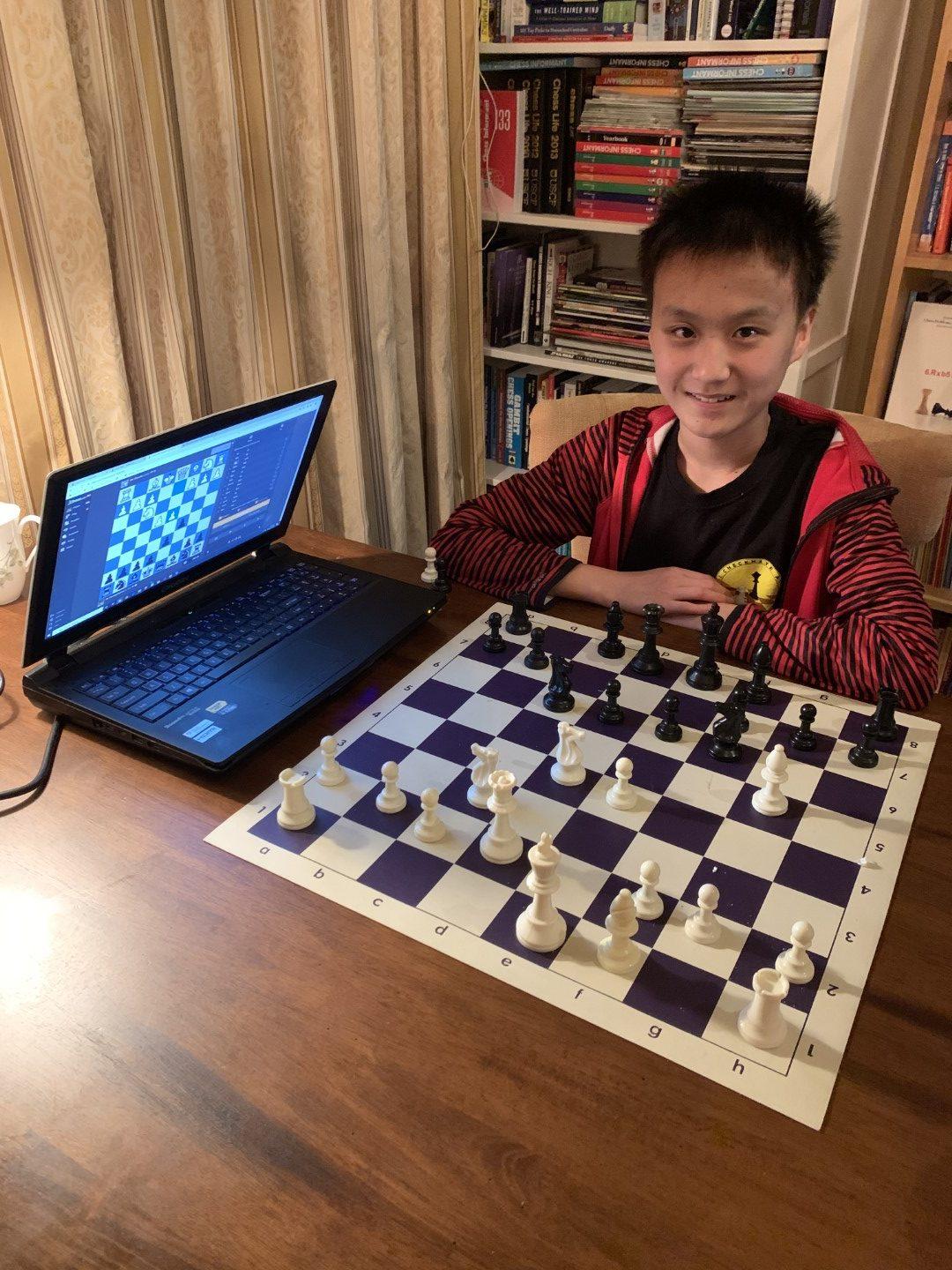 My setup for the game (see pictures) was a little strange. I used a real board next to my computer.  It was nice to use a board as it helps me calculate long variations. I felt more of an OTB vibe due to this. I had a bit of an awkward setup as I had to tilt my computer screen down so that that camera could capture both me and the board at the same time, as a part of the tournament anti-cheating measures. Because the screen was so close to my keyboard my fingers came close to slipping on the touchpad a couple of times!  I thought it was worth it anyways because I really like using a real board.

Round 2: My 2nd round was pretty smooth. My opponent went into a much worse endgame for no reason and I outplayed him from there.

Round 5: I had a tough game vs. a FIDE 2250-ish player, which brought my win streak to a halt. I was winning, but then I miscalculated and had to offer a draw in a worse position. This was a bit disappointing, but I had to stay positive. I was not as nervous as at an OTB Event. It is simply different when your opponent is not there at the board with you.

Round 6: I then played a 2422-rated Fy Rakotamoharo as Black. I got a very ugly position out of the opening, but then got a bit lucky and managed to save it. He offered a draw in an equal position after losing all of his advantage. I declined it, and a few moves later I blundered a pawn! I offered him a draw at that moment and he declined!  But, on that move he blundered himself and it was back to equal.  It ended in a draw. I think the draw offers did something to both of us psychologically. Maybe we were not able to calculate correctly as the draw offers were on our minds.

Round 7: I then beat a 2270ish player as White. He did not know what to do against my opening choice, so I got a great position and won convincingly. It was at this moment that I started to think about prizes and stuff.

Round 8: I was paired against a 2550ish player as Black. I was a bit nervous, but I had nothing to lose. I thought he was gonna go for the win at all costs, so I thought it was ok to get a drawish or boring position as he might overpress. I did not have a specific strategy to get such a position, but I was not worried about getting such a position as I often am because I usually like dynamic play. We got to endgame without many winning chances for Black. I decided to just focus on playing the best moves rather than the result. When he could have accepted the fact that he no longer has any advantage he overpressed and lost. I now had 6.5 out of 8!

Round 9: I went into the last round with a lot of thoughts. I was tied for first with a bunch of others with 6.5 points. I was paired against a well-known 2599-rated GM named Axel Bachmann and I was Black. I had the option to play for the win vs. a higher rated player, but I did not want to risk losing out on a prize. However, I kinda hoped he wouldn’t offer me a draw in the opening, so I wouldn't be tempted. But he did offer an early draw and I couldn't resist the temptation and accepted it so I would be guaranteed a spot in the blitz playoffs and be able to play for first prize. Looking back, I think I should have played on as I was better.  But I was happy when I discovered that everybody else with 6.5 drew their games! I guess I am not the only one who was scared of losing out on the prizes!  I was in a 9-way tie for first at the end of the round. I was very nervous as I realized I might not get a prize if I lost in the first round of the 16 player blitz knockout playoffs. I decided to play a bunch of blitz games to practice. I was happy I had the support of my friend Anish Vivekananthan. He helped with a lot of practical blitz advice and by rooting me on during the event. In each round of the blitz playoffs, you played two games of blitz against your opponent.  If you were still tied after that, you played an armageddon game.

Blitz Round 1:  I won the first game convincingly vs another IM, but then lost the second game as Black. It then went to armageddon. I was quite nervous, but I felt more comfortable without increment, as that is what I usually play when I play blitz. I got a good position, but then messed it up very badly. Luckily for me, there was no increment and I managed to flag him in a losing position.

Blitz Quaterfinals:  I played Kirill Shevchenko in the quaterfinals. I was not as nervous, as I had already secured a finish in the top 8. I outplayed him in the first game and ended up winning. He defended my attack very well in the second game, which I ended up losing. This led to another armageddon game. It led to a slightly better endgame, which I blundered into a losing position! He missed a mating net idea and blundered his one and only chance. It led to a time scramble where he blundered his rook!  I premoved my way to victory from that point.

Blitz Semifinals:  I had a difficult match vs. GM Aldy Ahmed, the highest rated player in the tournament. I saved two very difficult positions, but then lost in the armageddon game. I should have played more against his style. I got squeezed in all 3 games. I did not try hard enough to complicated the position, which led to my eventual loss.

3rd-place match:  I made a similar sort of mistake in the 3rd place match, which I lost. This time my opponent was a very tactical player and I took him straight to his comfort zone. I lost both of the games, which was a bit disappointing. It was still a great tournament, and I was happy to finish 4th. It was quite an interesting experience and I am looking forward to more of these tournaments!