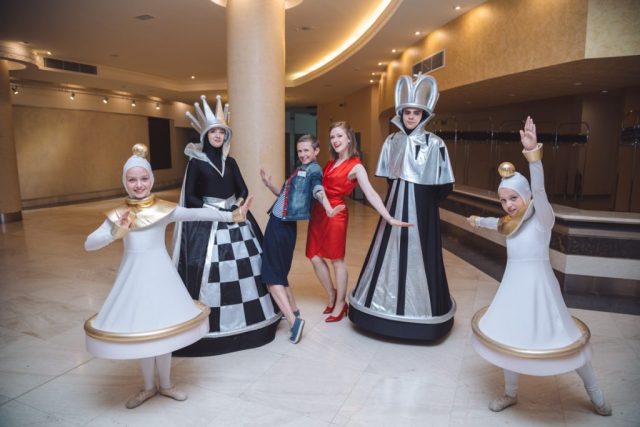 Closing Ceremony, http://ugra2017.fide.com/
The Chinese team won the 2017 World Team Chess Championship held June 17-26 in Khanty Mansiysk, Russia in a resounding performance. They scored a record 16 points (7 wins and draws with the US and Turkey) and did not lose a single individual game. Fourth board Li Chao (2720) led the way scoring 7 from 9 for a 2809 performance. Chao’s victory over Vladimir Fedoseev of Russia in round seven, that led to a 2 ½ - 1 ½ China victory, decided the tournament as up to that point the host country had been leading the event. The match between the top two seeds was quite dramatic as for much of it Russia was pressing on boards one, two and three with small advantages. At one point the Russian team captain, billionaire Andrei Filatov, tried to do some horse-trading, offering a 2-2 result mid-way through the match, but his Chinese counterpart declined having faith in his players to hold their positions. 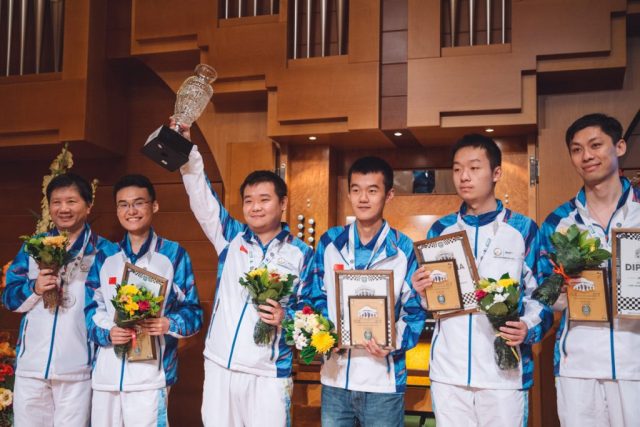 The winning Chinese team, Photo official tournament website
The Russian team also performed exceptionally well in Khanty finishing with 15 points, a score that would have tied or won any World Team since the switch to match point scoring in 2010. Despite the absence of Vladimir Kramnik and Sergey Karjakin (conflicts with Norway Chess and Paris), it was clear going into the event that the Russian team was taking thetournament very seriously. Just before the competition began, they decided to go with hot hands, substituting Fedoseev and Maxim Matlakov, who had tied for first in the recently concluded European Individual Championship, for Dmitry Jakovenko and Ernesto Inarkiev. When you have such a deep bench as Russia, with 14 players over 2700 FIDE, such strategies are permitted. The Russian team under Filatov has been attempting to remove the curse that has led to their winning no Olympiad team gold medals since 2002. While they have been consistently high performers in World Team events (gold in 2005, 2010 and 2013), they were so serious in Khanty Mansiysk that both their teams stayed in a separate hotel with air conditioning (a nice luxury in 90 degree heat) located 200 yards from the playing site. The rest of the teams were at the “Olympic” hotel out near the highway which necessitated 20 minute bus ride each day to the playing hall. The Chinese team were perfect hosts when they held the event in 2011. To their credit, this year's uneven playing field didn’t faze them in the least. Poland, led by a one-two punch of 2700s Radoslaw Wojtaszek and Jan-Krzysztof Duda won bronze with 12 points – possibly the first team medal for Poland since its glory days of the 1930s when Rubinstein, Tartakower and Najdorf played. The Poles, who were doing well throughout the event, entered the last round only a point back of Russia and two behind China, but lost a tough match to the latter 1 ½ - 2 ½ with Li Chao again taking care of business. India, without Viswanathan Anand (who rarely plays team events) and Pentala Harikrishna, started slowly but finished strong to finish fourth, as they did in the 2016 Olympiad. Add to this their third place finish at the Tromso Olympiad in 2014 and there is no question they are one of the elite teams in the world. Turkey, playing without its top-rated player Alexander Ipatov, was the surprise of the event, finishing fifth with ten points and would have been even higher if they had not run out of steam at the end losing to the United States and Belarus. Of the teams finishing sixth through eighth only Belarus can be reasonably pleased with their finish. For Ukraine, the pre-tournament pick for third, and the U.S., the result was miserable. More on the latter in a moment. Norway sent a young team, captained by expatriate American Grandmaster Jonathan Tisdall who has made his home in Oslo for over three decades. Its three top boards, all in their teens and early twenties, performed above expectation, and if they had gotten just a little help from their board 4 and reserve player (collectively 1 out of 13) they would have finished in the middle of the pack. Last but not least were the Egyptians. The perennial underdogs in this event and without their 2600 players Bassem Amin (currently 2672) and Ahmed Adly, they barely averaged over 2400 FIDE as a team, but don’t let ratings deceive you. The team was full of fight and seriously undervalued. Though they didn’t win or draw a match they picked up plenty of rating points and 42-year-old reserve player Farahat Ali, made a Grandmaster norm (in World Team events there is an exception that 7 game norms are allowed). There is no question that limited opportunities hold back the Egyptian players. Over in the Women’s section its second board Wafa Shrook, rated 2141, beat a 2535, drew a 2426 and beat a 2449 in rounds 5-7! What happened to the U.S. team? Jet-lag was an issue as mentioned in my mid-event report on the 2017 World Team, and unfortunately it continued to affect the American contingent throughout the tournament, and plagued not only us. The Indian reserve board Parimarjan Negi, who is a student at Stanford and traveled from San Francisco to Russia, was spotted fast asleep at the closing ceremony. 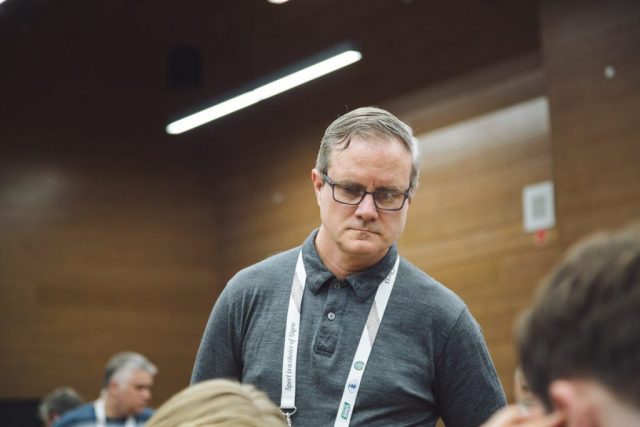 IM John Donaldson, http://ugra2017.fide.com/
The other nine teams that played were no more than a maximum time difference of four hours from Khanty Mansiysk, while the US players had to cross at least ten zones and in some cases twelve. Of course we knew this going into the event and planned accordingly. Two years before the World Team was in Armenia which is eleven hours ahead of the U.S. West Coast, and we did great, finishing equal fourth  after being seeded eighth. We flew into Yerevan four days before and it was just enough to adjust although one more day to acclimate would have been helpful. The initial travel plans for the 2017 World Team were similar but quickly unraveled. Shortly after buying our tickets the organizers moved the first round up a day. That plus the weird flight schedule (the only flight left for Khanty at 2:00 am) meant that we had two days to adjust. It didn’t work. In retrospect we should have flown to Europe a week before, spent five days there, then flown to the tournament two days before. This does mean additional money spent on accommodations (the US Chess expense money covered only two days) and another week of lost income. The latter was the reason several top-rated candidates for the Womens team passed up the event and at least one prospect for the U.S. coach declined going to Khanty – they could make more teaching at several chess camps than spending over two weeks in Siberia. Enough with the excuses, now on to the last four rounds. With four match points after five rounds and finishing with Ukraine and Russia, we knew we better win rounds six and seven against Egypt and Turkey. We did, but not as convincingly as the 3-1 scores suggest. Varuzhan had a lucky escape when he overlooked White’s thematic 26.f5, a move he would normally see in a blitz game. The move caught him totally off-guard, and was further evidence that he didn't find his form in this event. 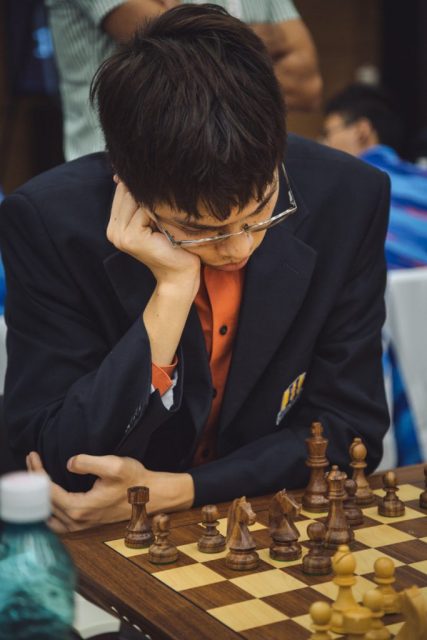 GM Ray Robson
One bright spot for us was Webster University student Ray Robson’s snap-crackle-pop miniature over an experienced Egyptian International Master. The victory over Turkey in round seven moved us up to 5th place with chances to finish on the podium if we finished strongly. Once again Ray Robson was the star for the team winning a beautiful attacking game. Round eight ended any hopes for a decent finish. Rejecting the Ukrainians offer for 2-2 (they had been suffering even more than us with their two 2700s both minus 2 at this point in the event), we had a hard fought match that was decided when Varuzhan lost on time on move 40 in a drawn rook ending, just after making his move and punching his clock. Var was never in trouble, and in fact slightly better for part of the game, but was focusing a lot on Alex Onischuk’s game who needed a miracle save to split the point. The team still hoped to finish strong but was defeated 4-0 in the final round by the Russian team. Three of the games in the match went over five hours, and were among the last to finish in the 2017 World Team Championship. 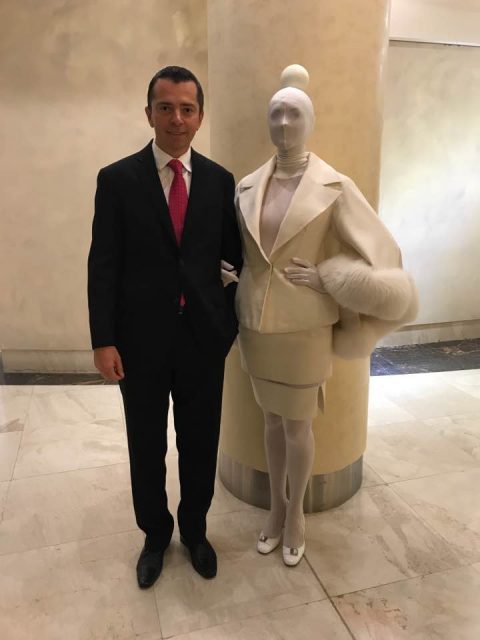 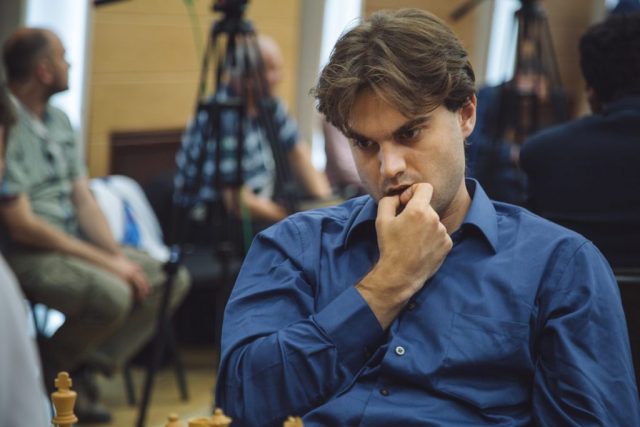 GM Sam Shankland, http://ugra2017.fide.com/
US Team Individual Results Note: Ray had Black in 6 out of his 8 games. Alex has now tied the all-time record for most times representing the United States in Olympiads/World Team Championships held by Larry Christiansen and Yasser Seirawan (twelve each). Robert Byrne, who played nine Olympiads when they were longer, with preliminaries and final groups, looks to have played the most games of any American with 116.
SHARE: