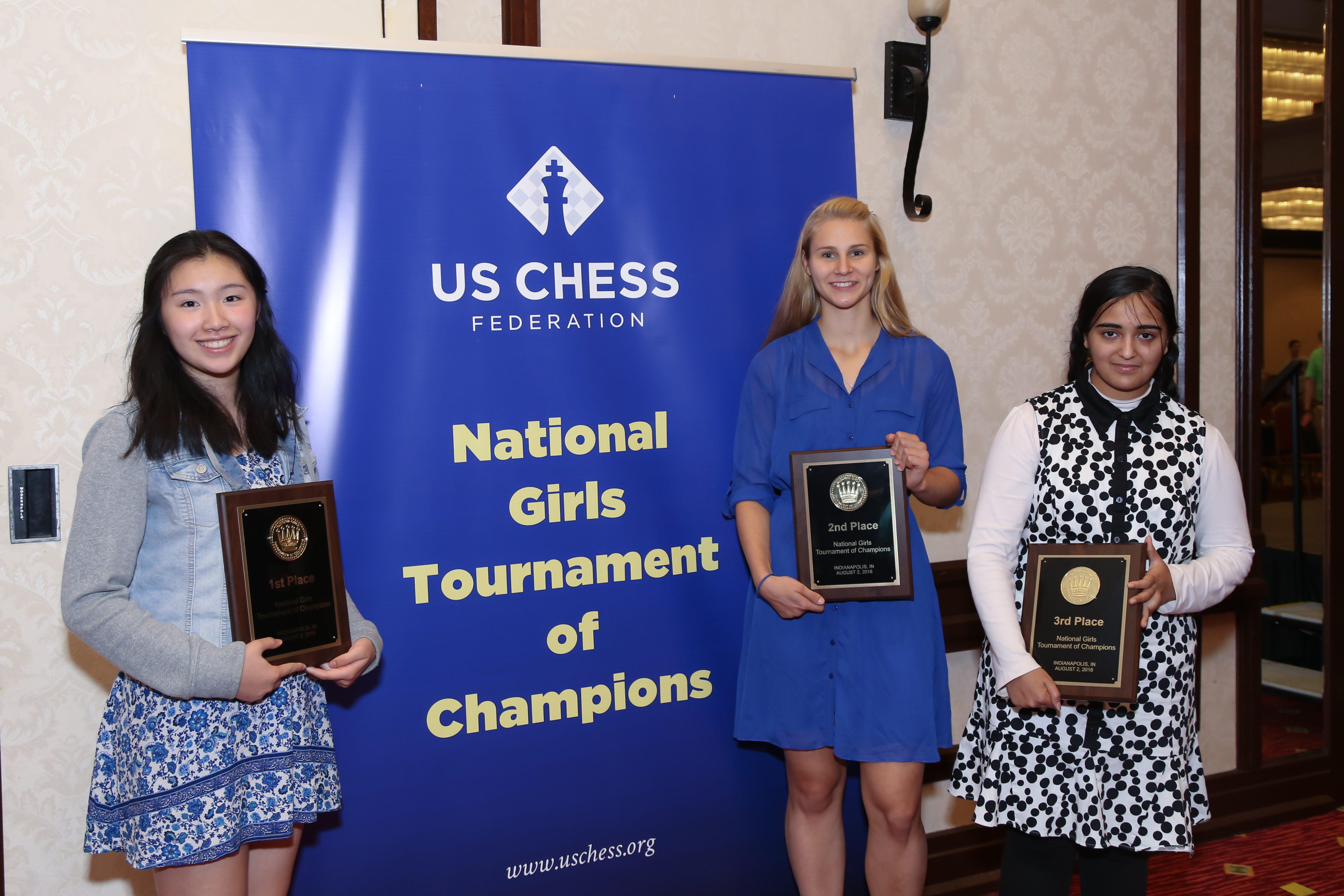 Top three in the National Girls Tournament of Champions: Jennifer Yu, Veronica Zilajeva (OK), Rajendra, Anupama (WI), Photo Anne Buskirk
East Coast juniors captured all three titles up for grabs in the Hoosier capital. After six rounds of play spread over four days in Indianapolis, the junior championships closed with clear winners in each of their three separate, six-round events, yielding a $5,000 scholarship for each of the leaders. NM Mika Brattain of Massachusetts topped the Denker Tournament of High School Champions, giving up two draws to score 5-1. New Jersey's NM Brandon Jacobson scored 5 1/2 to outdistance the competition by a full point to win the Barber Tournament of K-8 Champions. NM Jennifer Yu of Virginia also allowed only a single draw, against WCM Claudia Munoz of Texas in the last round, to win the National Girls Tournament of Champions. In addition to the scholarship, each first-place winner also took home an $800 stipend provided by the US Chess Trust. 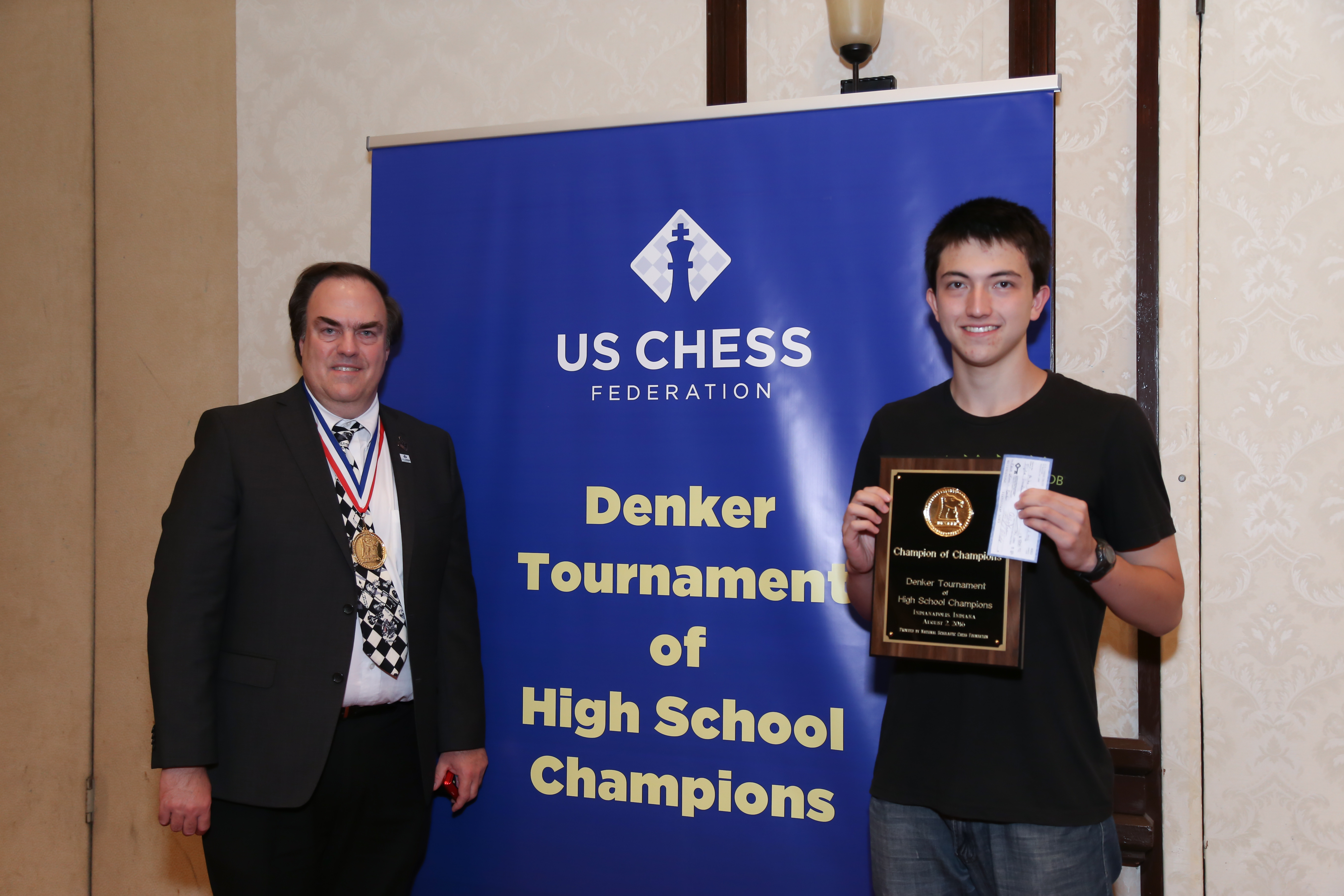 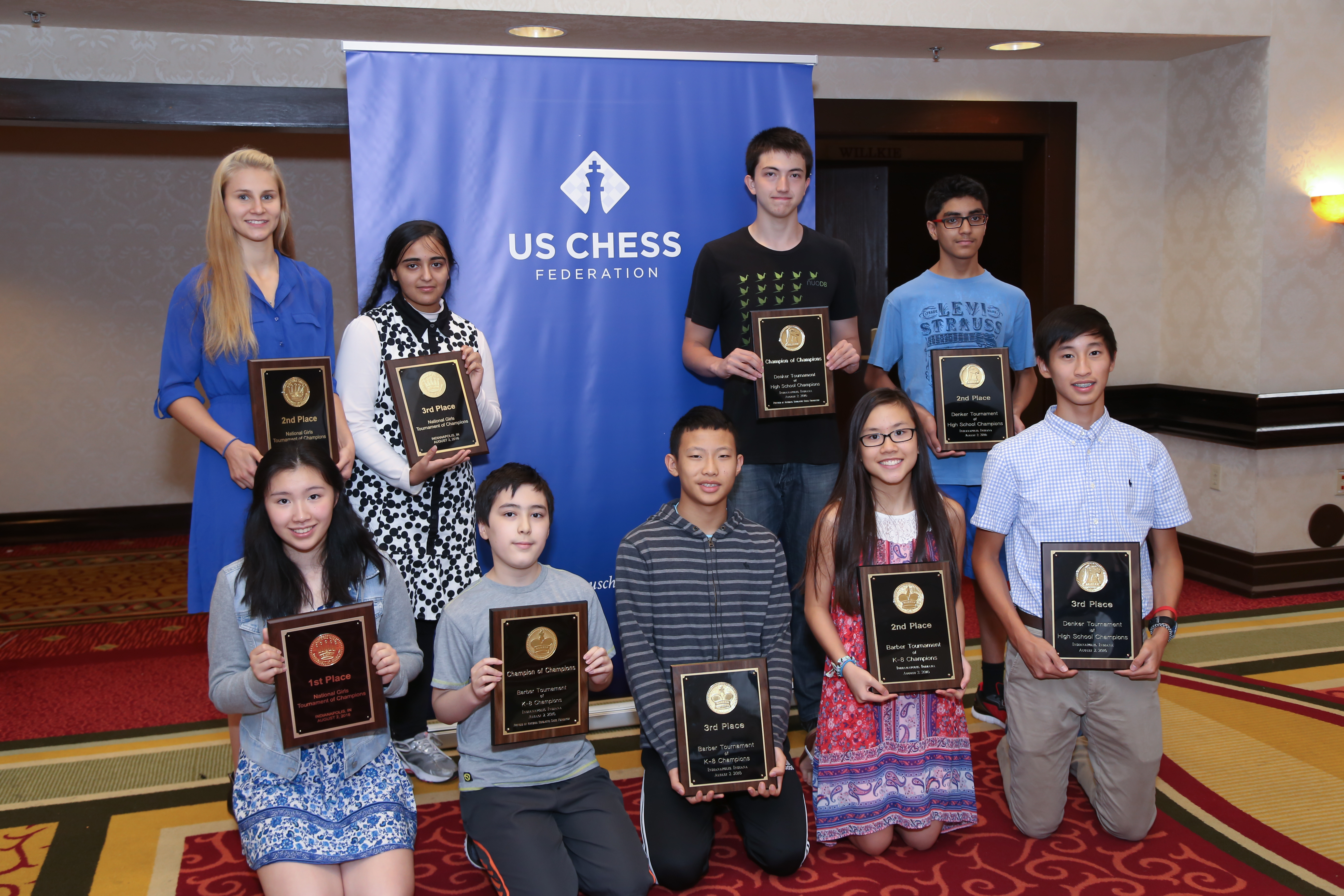 The top three players in each section, Top (L to R), Veronica Zilajeva, Rajendra, Anupama (WI), Mika Brittain, Advait Patel (OK), Bottom: Jennifer Yu, Brandon Jacobson, Andrew Zheng, Emily Nguyen and Bovey Liu, Photo Anne Buskirk
The Ursula Foster prizes, donated by Clifford and Rick Lester in memory of their mother, recognizes the best performance of a player under 16 in the Denker and a player under 13 in the NGTOC. NM Advait Patel of Oklahoma, who came in second in the Denker, and Rochelle Wu of Alabama, who tied for third in the NGTOC, earned the $500 prizes. Barber-winner Jacobson also won the $500 Chess Camp Scholarship donated by Steve Shutt for the best performance by a competitor under 13 in the Barber event. Girls performed well in the Barber as well- US Junior Girls Champion Emily Nguyen tied for 2nd and Carissa Yip scored 4/6, including the following nice victory. Six Denker competitors tied for second-seventh place: Patel, NM Bovey Liu of Texas, NM Zhaozhi Li of Illinois, IM Alexander Velikanov of Wisconsin, IM John Burke of New Jersey, and NM Aaron Grabinsky of Oregon. Five tied for second-sixth place in the Barber: WFM Emily Nguyen of Texas, NM Andrew Zheng of Maryland, Vincent Baker of Ohio, FM Trung Nguyen of Virginia, and NM Ben Li of Michigan. Veronica Zilajeva of Oklahoma took second place in the National Girls Tournament of Champions. Rated 1927 at the opening of the event, she outdistanced five experts and a pack of other A-players. New Jersey took the team title with a strong performance by its representatives. Each of the 139 junior competitors was the chosen champion of his or her state affiliate.  Complete, round-by-round results are available online at www.uschess.org/results/16/usopen/?page=STANDINGS&xsection. Some 30 of the junior champions remain in Indianapolis to join more than 100 others in the second wave of entries in the US Open, entering the six-day option, boosting the US Open Championship rolls to nearly 300. Another wave, players choosing a four-day option, will start on Thursday. Follow US Open standings and pairings here, watch live games here, and look for updates here as well as on twitter, where you can use the hashtag #uschessopen to chime in.
SHARE: