International Master John Watson is often considered one of the world's leading authorities on chess literature. A fine author in his own right, with more than 30 books to his credit, Watson has long been regarded as one of chess' top critics as well. His reviews for The Week in Chess were legendary for their erudition, their completeness, and their honesty.

Watson took over the Chess Life review column in June 2020, appearing in print each month since then. Some chess fans have lamented the fact that Watson's reviews were no longer available on the web, and we have heard them. Therefore, in the interest of better serving the global chess community, US Chess has decided to make Watson's reviews available on uschess.org after a small window of exclusivity has passed. We beginning with his February review of a new book on GM Vasily Smyslov, born on this day 100 years ago, and whom a young, long-haired Watson once met in Lone Pine.

We will begin to fill in the backlog of Watson's reviews in the coming weeks. ~ed.

Of all the world champions, today’s players are probably least familiar with the career of Vasily Smyslov. And yet Smyslov was arguably more successful than many of his more renowned colleagues. This is shown by his many decades of sparkling tournament and Olympiad results, and even more so by his World Championship cycle achievements.

Smyslov finished second in the World Championship super-tournament of 1948, ahead of GMs Samuel Reshevsky, Paul Keres, and Max Euwe. He then won two of the strongest Candidates tournaments in history, the first in Zürich 1953, which led to a World Championship match versus GM Mikhail Botvinnik in 1954 (drawn 12-12), and the second in Amsterdam 1956, which culminated in winning the championship decisively (12½-9½) versus the same opponent in 1957.

Several commentators, including Kasparov, have opined that Smyslov was the world’s best player for most of the 1950s, surpassing even Botvinnik. He subsequently qualified for the Candidates four more times. Amazingly, at age 62, he finished second in the 1984 Las Palmas Interzonal, followed by winning two Candidates matches, and only a loss in the finals to GM Garry Kasparov prevented from playing in still another World Championship match. Subsequently, Smyslov continued to play successfully, won the World Senior Championship at age 70, and was rated almost 2500 when he played his last event at age 80!

Considering all this, surprisingly little has been written about Smyslov’s life and games. His own two-volume work Smyslov’s Best Games (the English version published by Moravian Chess in 2003) is extremely readable, but has little biographical information and the annotations are rather superficial and limited by modern standards.

There has long been a need for another book to do justice to Smyslov’s career, and the Russian FM Andrey Terekhov has devoted years of study and research to the task. Vasily Smyslov, Volume I: The Early Years: 1921-1948 is the first installment of what the author says will very likely be more than three volumes. The first volume has already vastly expanded our historical understanding, since Terekhov has unearthed countless previously unknown games and biographical facts from the pre-war and war years. This is a period from which records of Smyslov’s life were already scarce, a situation further exacerbated by the fact that a bomb destroyed the home where he lived at the time.

Terekhov includes both well-known and previously unpublished games. The annotations take into account Smyslov’s own notes and those by numerous other top-level players; this gives the reader a sense of Smyslov’s own thoughts and the real-world considerations involved in the heat of battle. Terekhov supplements this with computer-assisted analysis so that one gets to the truth of key positions, but he is careful to separate impossibly exotic lines from what was realistic for the players to find in practice.

Smyslov was a late starter and didn’t play a tournament game until he was 14; at that point, he quickly found his footing. In one of his first events he played a game that remained a sentimental favorite throughout his life:

Terekhov: “The quiet 16. ... Nd7 was probably stronger, but in that case the game probably would never have been published!”

The critical position. Can Black crash through? 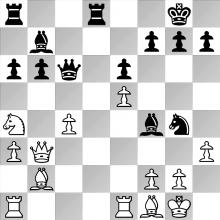 Terekhov: “The point. The annotators invariably point out the similarity of this combination to ‘Rubinstein’s Immortal’ (Rotlewi-Rubinstein, Lodz 1907), a game that Smyslov undoubtedly knew. It is a great example of why it is important to study the classics. However, as the next move shows, the decisive blow is based on a motif that Smyslov must have learned from another classical game!”

Smyslov’s ascent over the next few years was spectacular. Just two years later, in 1937, he played in a Young Pioneers championship versus some of the best young players in the country and won with a perfect 11-0 score. The very next year, Smyslov finished first in Soviet Junior Championship, tied for first in the Championship of First Category Players, and most impressively of all, won the powerful Moscow Championship, ahead of leading players like Lilienthal.

Smyslov has gained a reputation for harmonious, technically accurate play, but this volume is full of wild, double-edged struggles and miraculous escapes, arguably typical of a younger player’s game. Terekhov suggests that these adventurous contests are in part a result of Smyslov’s poor opening knowledge, and that as he improved in that phase of the game he was better able to control the vicissitudes of play. By the mid-1940s he begins to outplay other leading players consistently and establish his technical superiority, as can be seen in games such as the following positional masterpiece from the 1948 World Championship. Terekhov supplies eight pages of detailed notes, but even without them you can appreciate how inexorably the game develops against an American legend who was extremely difficult to defeat in his prime:

White has a large positional advantage. 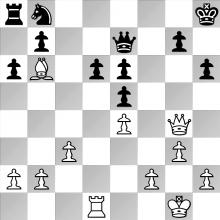 Terekhov: “An astounding solution. It is difficult for humans to even consider such a counterintuitive move, and one also has to notice the unusual follow-up idea that we will see next.”

An easier win is found via 29. Ba5!, avoiding the loss of tempi that now follows.

Along with the games and biographical material, The Early Years: 1921-1948 includes an informative introduction by Terekhov in which he outlines Smyslov’s place in chess history and describes the nature of his own research for the book. In addition, there are appendices entitled “Smyslov’s System in the Grünfeld Defense” and “Smyslov’s Endgames” (the latter by GM Karsten Müller), and a chapter about Smyslov’s wife of 62 years, Nadezhda Andreevna.

As he relates the events of Smyslov’s career, Terekhov gives us an overview of Soviet and international chess at the time. Apart from extended discussions of Smyslov’s world-class rivals, games are often introduced with mini-biographies of his opponents, including luminaries such as GMs Andor Lilienthal, Yuri Averbakh, Issak Boleslavsky, Igor Bondarevsky, Alexander Kotov, and Viacheslav Ragozin; IMs Ilya Kan and Vasily Panov; and opening theoretician Alexey Sokolsky. We also learn about somewhat more obscure players whose names true chess fans may nevertheless recognize, such as GM Vladimir Alatortsev (who served as Smyslov’s coach and second for many years), Nikolay Rudnev, Sergey Belavenets, Boris Verlinsky, Karel Opočenský, Georgy Dzagurov, Gavriil Veresov, and Iosif Rudakovsky. These descriptions make the book especially attractive for fans of chess history.

It’s worthwhile in and of itself to see the history of our game preserved, but a book like this can also constitute an important role in one’s chess education. Although I suspect that young players aren’t frequently examining the games of the old masters, they would be well served by taking a break from opening theory and studying these. During the years covered in this volume, Smyslov was perfecting his game and rising from an inexperienced and flawed player to parity with the best players of the world. To my mind, that’s a process worth reflecting upon and trying to learn from.

Vasily Smyslov is one of my…

Vasily Smyslov is one of my top favorite chessplayer. I have learn a lot from his games !!! One of his best lifetime achievement is beating then World champion Mikhail Botvinnik , and become a World Champion himself !!!