Back to the US Chess School: Davis Zong Jr on #49 in New York City 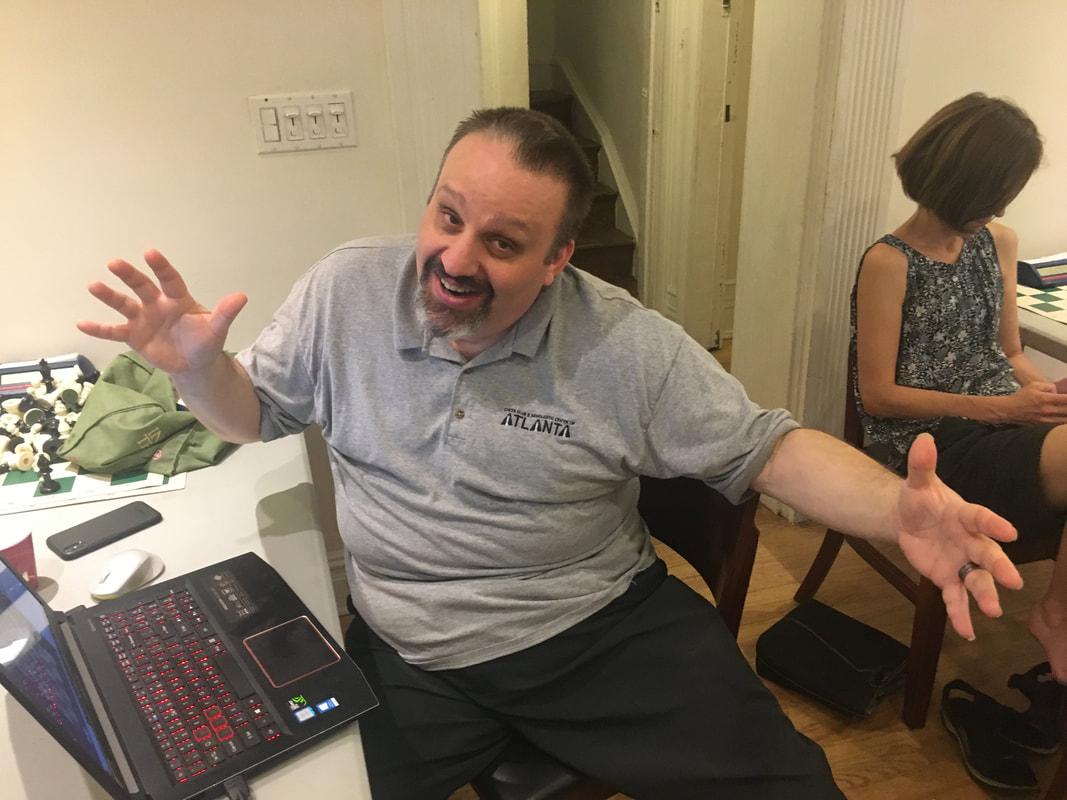 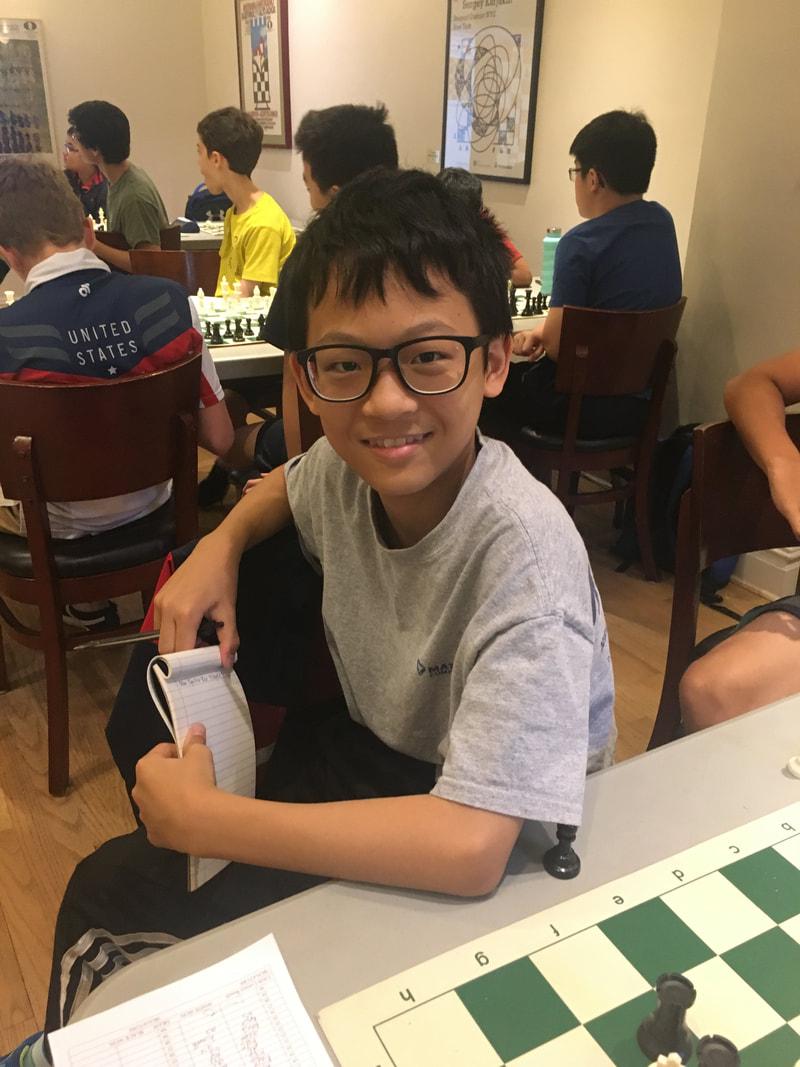 Article author, camper Davis Zong Jr.
This is the second of a four-part series, “Back to the US Chess School”, which gives readers an inside look into the elite training academies, held over the summer. Check out our first installment by Jed Sloan on USCS #48 in Saint Louis, and look for upcoming editions by Craig Hilby on #50, and Akira Nakada on #51 Blang! Ben Finegold bundled the pieces he captured and like a crane, triumphantly hurled them aside. “Anyone else?”, he said, and having only spent ten seconds on the clock, casually pondered between two mates, as we looked admiringly at his feat of winning every bullet game against the campers! On day one, Ben showed his youthful spirit and made us write in our notebooks “It is better to lose 1000 games than to draw one.” During the past two summers, I had the honor to attend two US Chess Schools, and gained approximately 100 rating points each summer. I returned to chess from MATHCOUNTS Nationals and ARML (American Regional Math League) this June. For me, the US Chess School is the highlight of my summer chess journey. I envisioned the magnificent, majestic projector, glowing with classics that are still being enjoyed today! It was exciting to meet the smiling faces of IM Greg Shahade and other chess friends. “Is this position mate or plus a million?” Ben asked as he showed Botvinnik [who was known for constricting his opponents positionally] winning in a bloody attack. Puzzles and sacrifices could be our bread and butter, but when given an endgame, we would be bored by the absence of fiery sacrifices and red-hot mating attacks. “I can bet money that at least one of you will set up the position wrong,” GM Finegold joked as he changed the position of Black’s passed pawn on the neighboring board. “So, now that you CORRECTLY set up this endgame, play each other while I watch and laugh at you.” Ben said, and he wasn’t wrong. Many kids played 2. Kh5 claiming a straightforward draw, while Ben attached “at least five questions marks” to the move. It turns out that black has 2...Rb5!, followed by 5...f5+ and 6...f4, allowing him to pick off the g and h pawns and thus queen the f-pawn. Studies like this, requiring heavy and precise calculation, must have helped Ben achieve Grandmaster. Many World Champions are known for displaying powerful attacking games and we would watch as their opponents, ranked #2 in the world find their defenses crumble like houses of straw. GM Finegold emphasized the importance of calculating the opponent’s best resistance, even in the driest of all endgames. When we were sure that the position was a win for black, Ben challenged us play him and he drew with a fortress out of thin air. (Yes, it is the famous Vancura position mentioned in every good rook endgame textbook, but it is still not as cold a draw as the Philidor position). After convincing us that a draw was inevitable, he managed to promote his pawn against the seemingly impenetrable defense by starting off with the “waste move” 1...Ra2+. In a sense we were right; the position was a win for black, but on a much more complex level. “Set up the position. The taller one shall have white!”, Ben exclaimed, and a sad groan echoed through the shorter campers, as their position as Black looked lifeless and hopeless. However, a hidden stalemate trap lay, sneaky as a snake ready to pounce. White is indeed winning from the very start, but the “quick liquidation win” of 1. d6?? leads to a cold shower for white - a stalemate with the black king locking himself in the dungeon on a5! Instead, white needs to shuffle around and push d6 at the correct time, so he can follow up with Kd5, winning. Imagine blowing away your deserved half point like that after five hours of sweat and tension. We had many fun eureka moments while studying studies that unravel very subtly, while also looking forward to the bullet tournament. This anticipated contest was a chance to smash the clocks (none of them broke, fortunately). It was also a rare occasion to watch masters hang pieces! This camp’s bullet tournament was much more competitive than normal, as Ben Finegold was giving practice games for 30 minutes after the end of each day of camp. His streak of all wins against the campers amounts to about 50 consecutive bullet wins. In order to avoid a predictable tournament winner, GM Finegold was not allowed to participate. 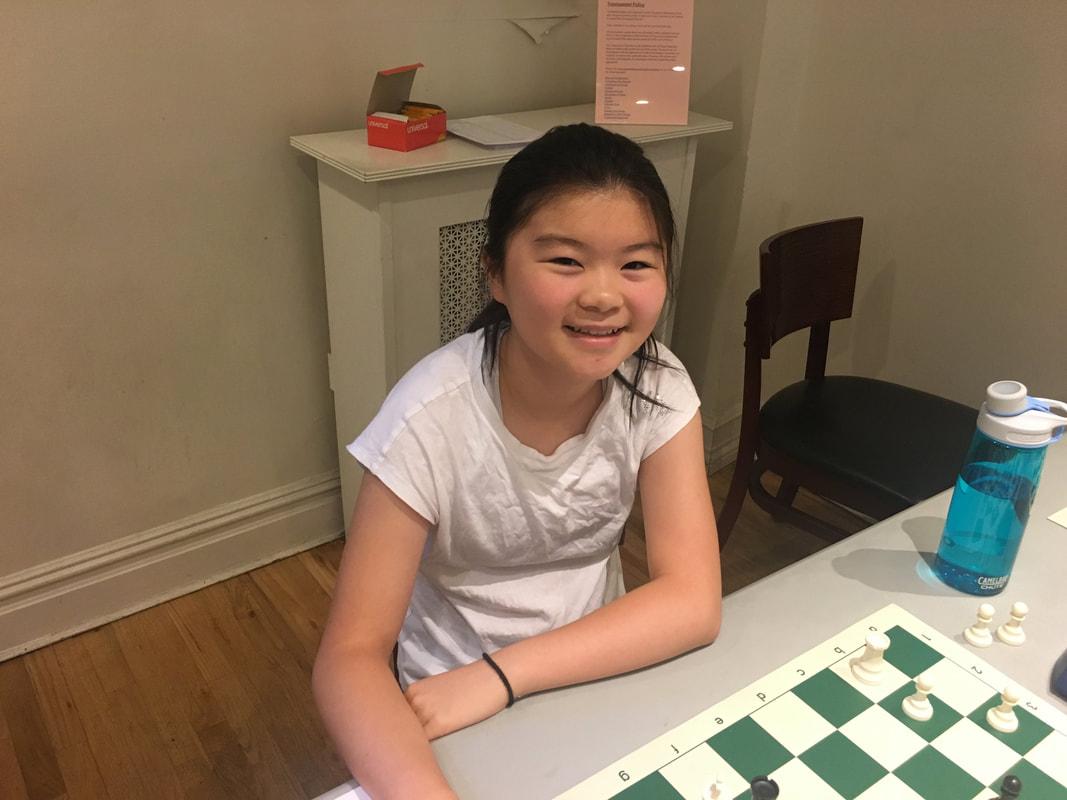 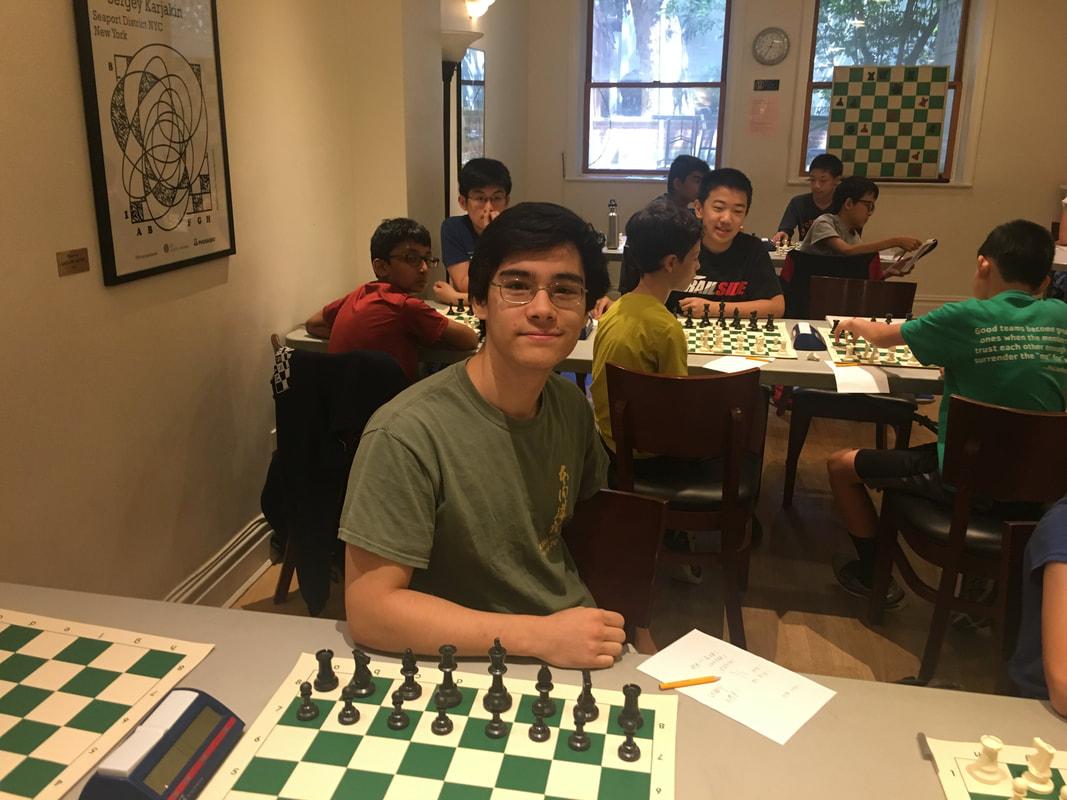 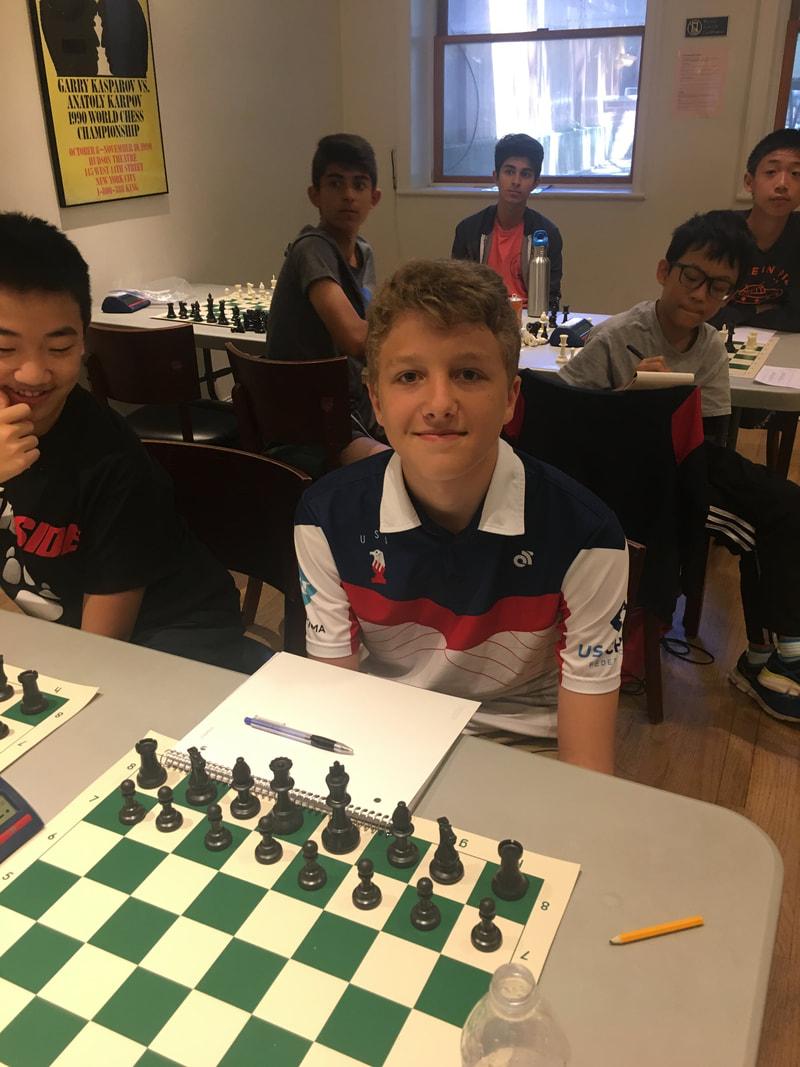 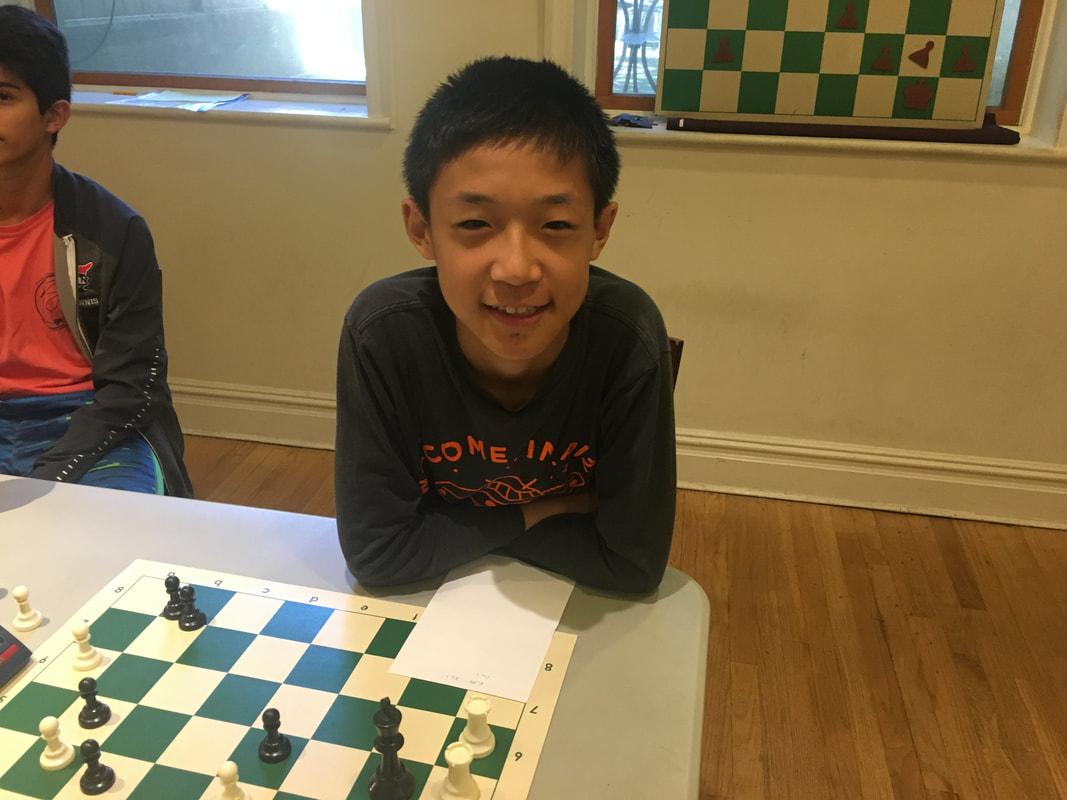 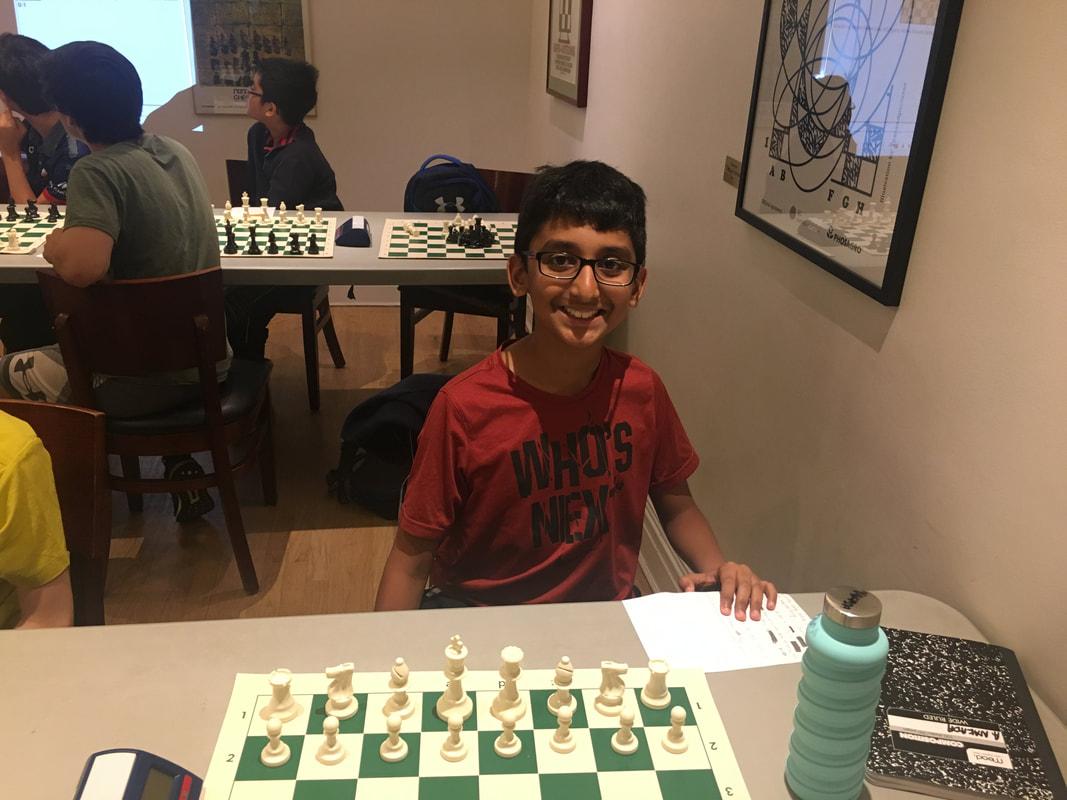 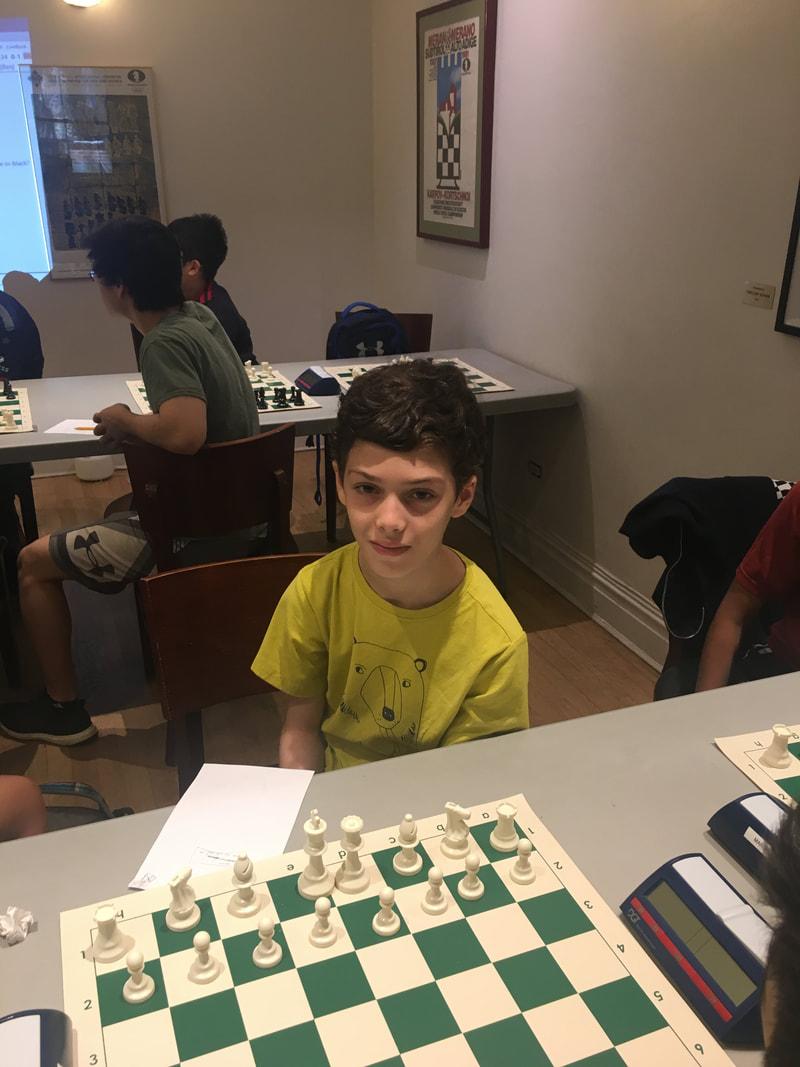 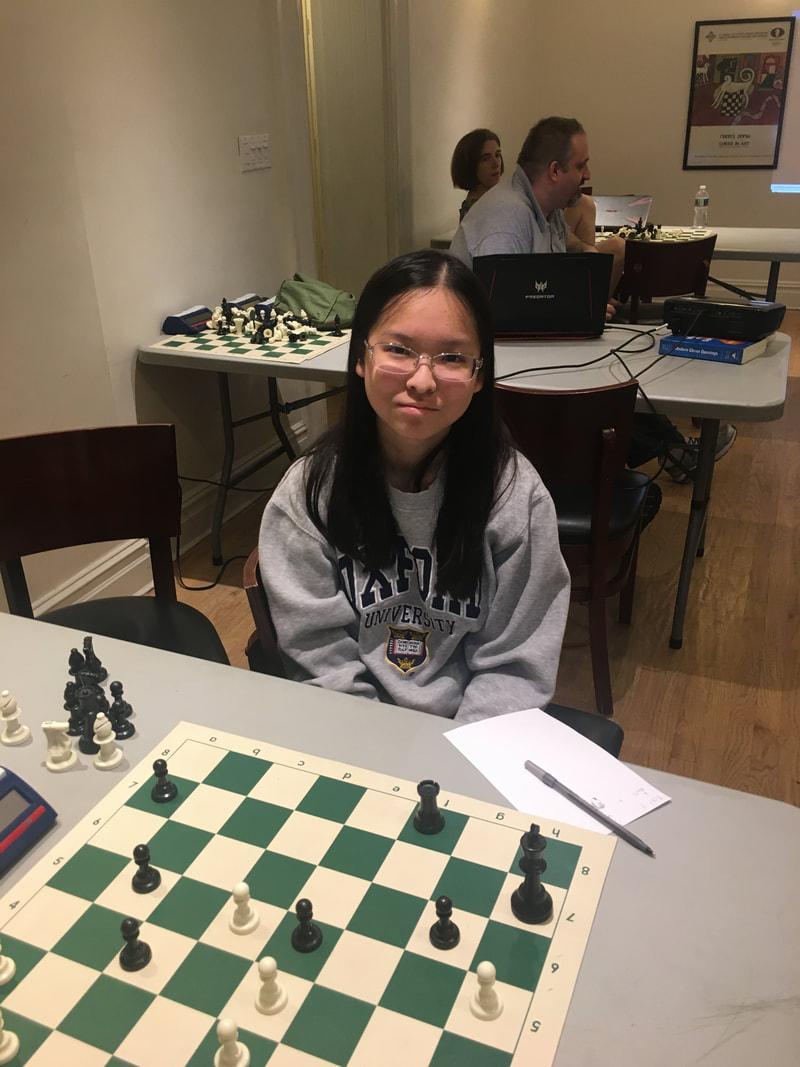 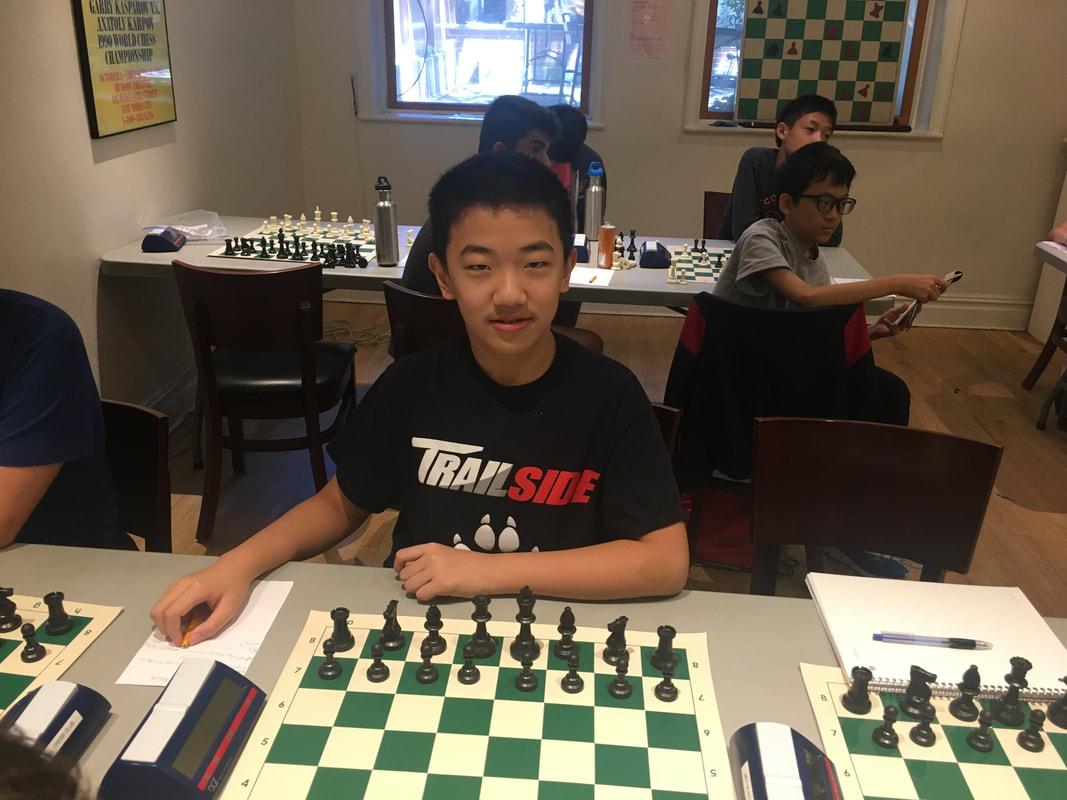 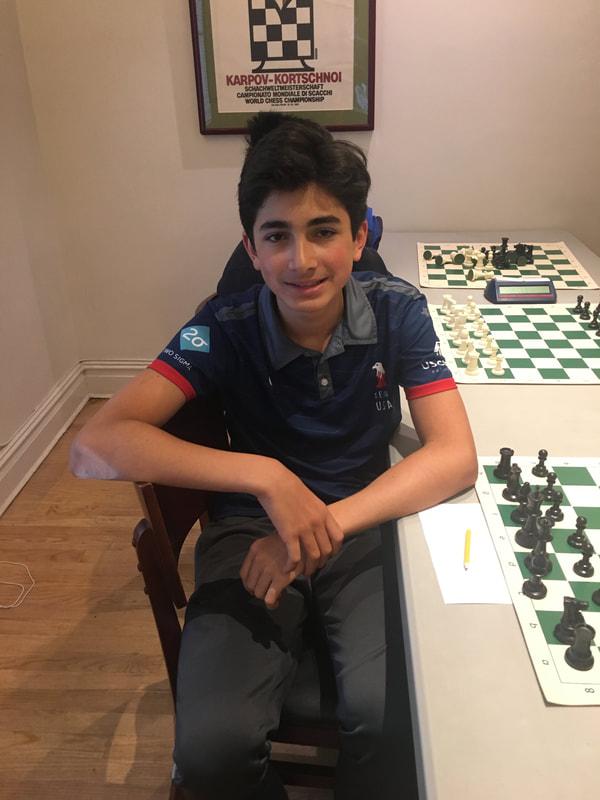 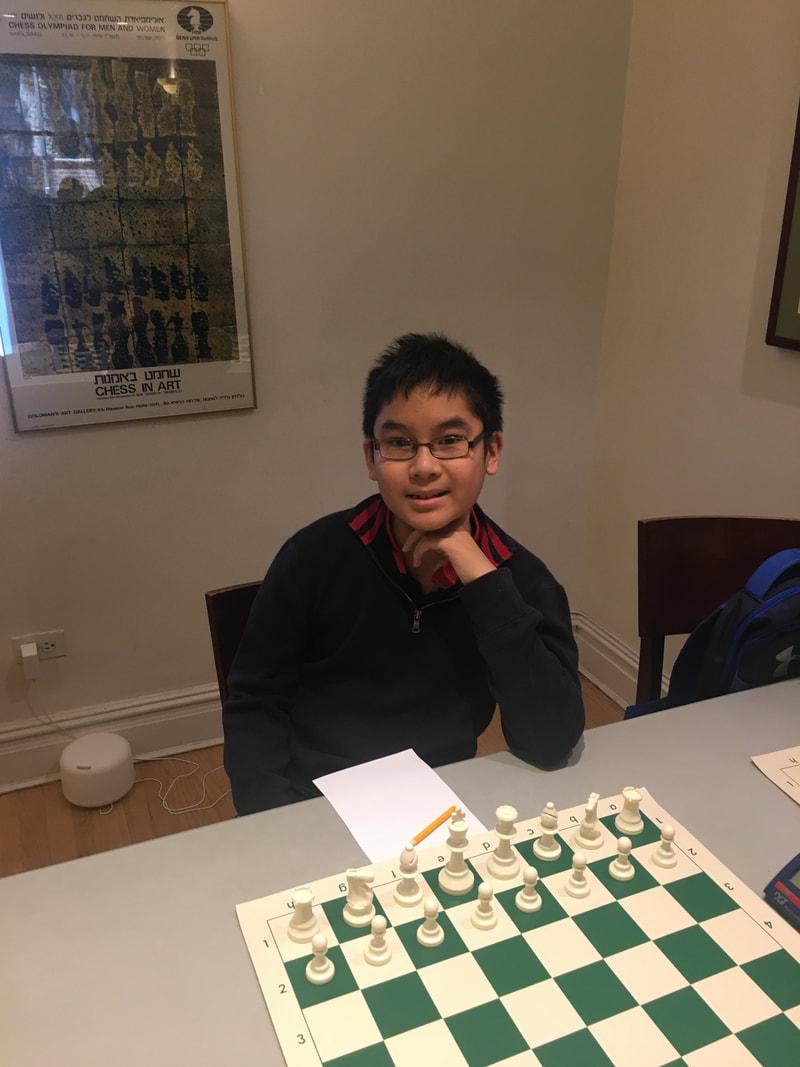 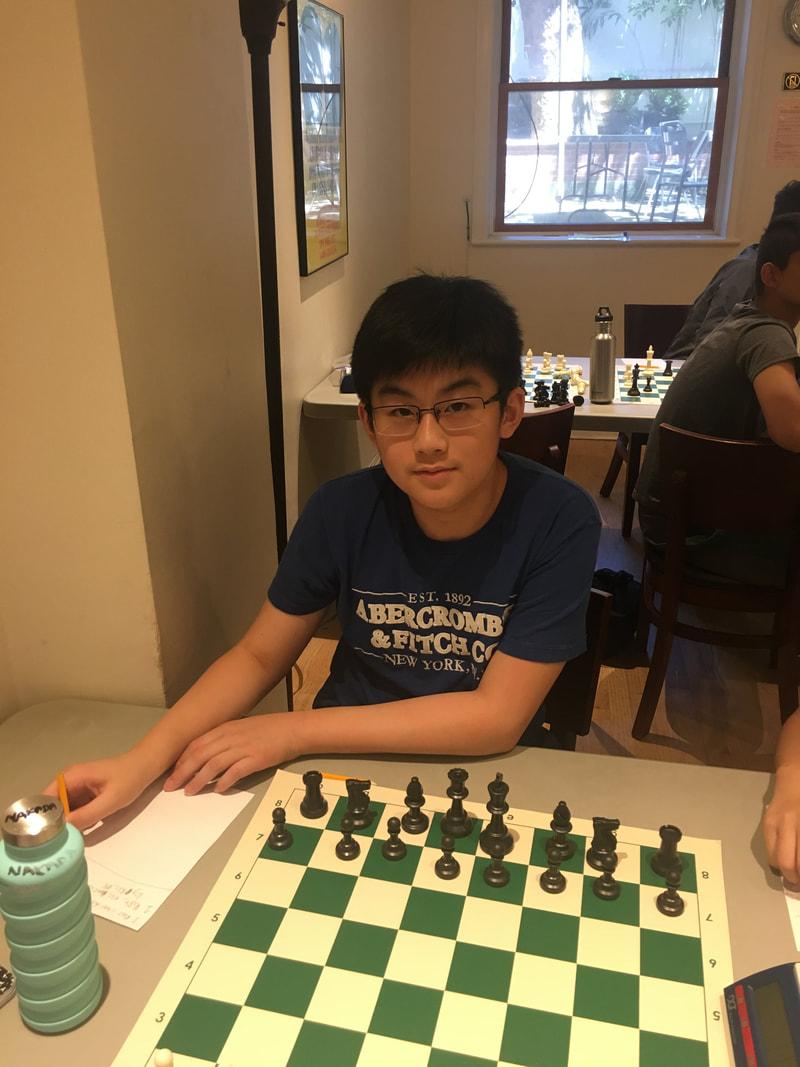 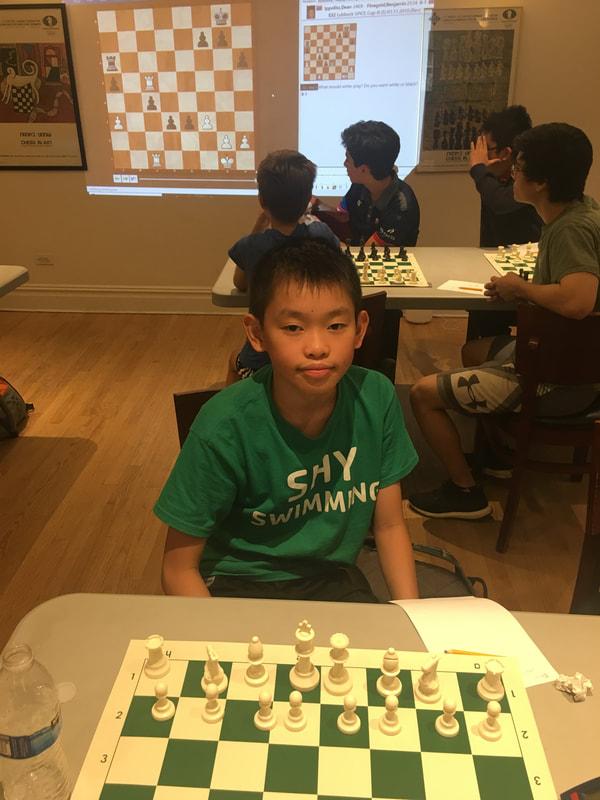 Merric Hu
The time control of 10 seconds with a 1 second increment insured that the time scramble mayhem started at the start and ran throughout the game. Video cameras might have shown in the flaming flashes of battle, pawns being adjusted from c2 to d2 to d3 and the move Bxf6 being played, capturing a rook on f7. The ultimate winner of the tournament was Roshan Idnani, but an honorable mention goes to Jack Levine, my incoming Hunter College High School teammate, for ending three of his four bullet games with more than 30 seconds on the clock. (Yes, he gained more than 20 seconds with the 1 second increment!) 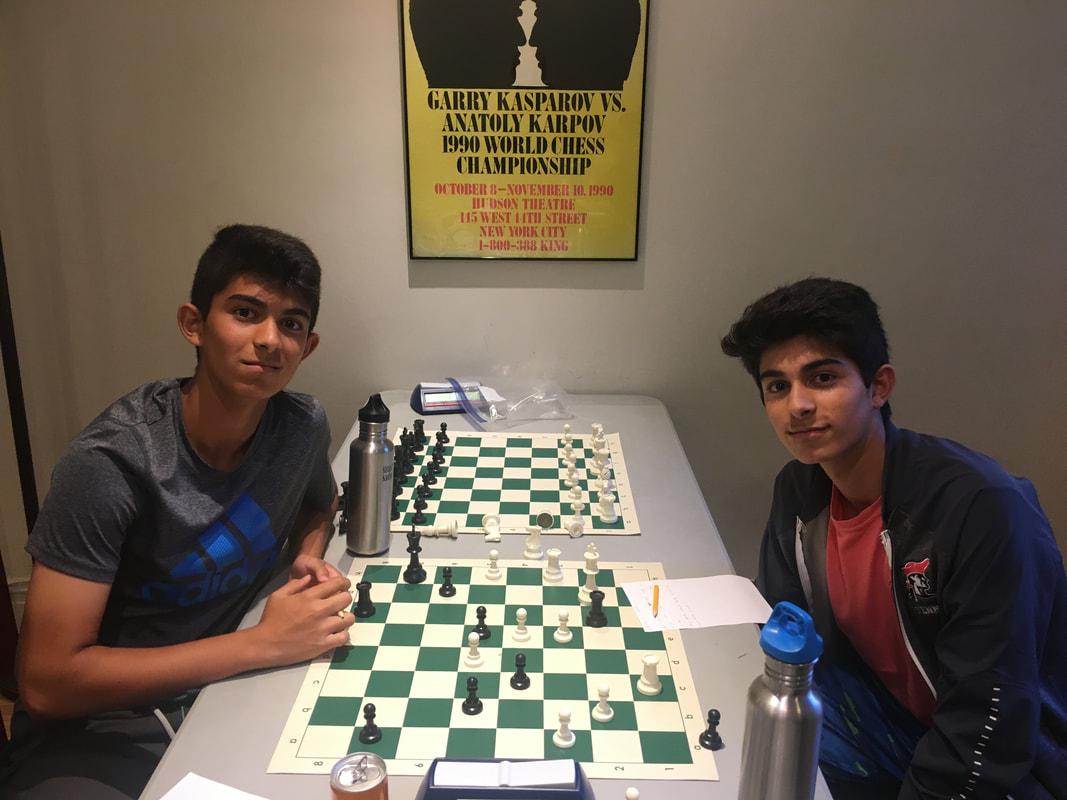 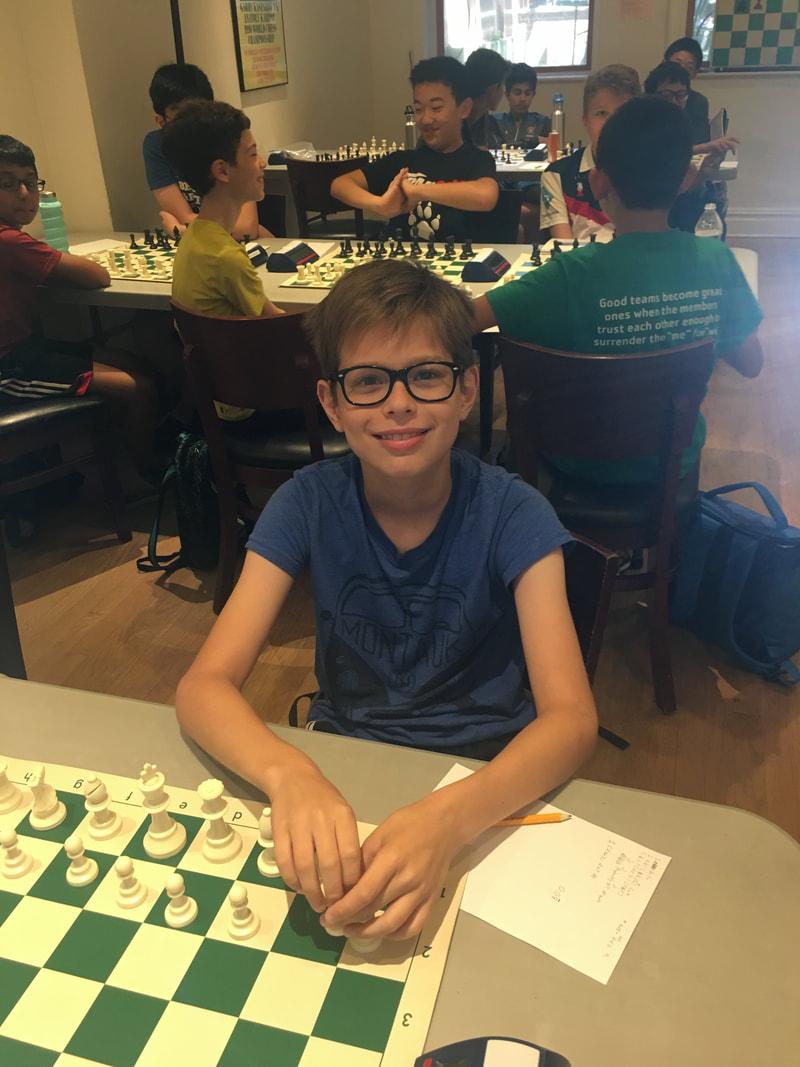 Jack Levine
This camp is one that we will miss, and Ben Finegold was visibly saddened on the last day, as he stopped making jokes. This was not the final farewell though, as many of the campers showed up at the Manhattan Open, where I achieved a 2498 performance. The US Chess School inspired me, and every time a critical position appeared, a sudden electrical spark would ignite like a bright lamp, bringing me back in front of the projector where precise calculations were done, and I would yearn to do the same. Blang! The sturdy wooden door of the Marshall shut behind us, its hinges gradually revolving inward like that of a powerful train engine, as if triumphantly escorting us to a new, and higher level of chess. Thanks to Dr.Jim Roberts, the Marshall Chess Club, Greg Shahade and Ben Finegold for making this camp possible. Stay posted with the US Chess School on their website, instagram and twitter.
SHARE: