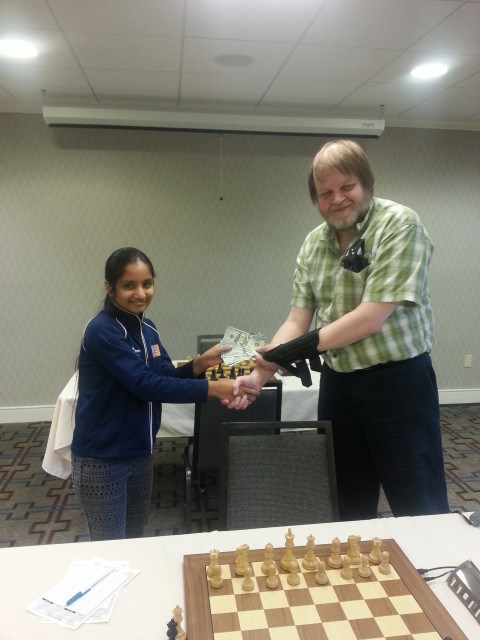 Congratulations to Akshita Gorti for winning the 2015 WGM Norm Tournament held in Manchester, NH by Relyea Chess with a score of 7.  Her favorite game was  her win with White against Shayesteh Ghaderpour. "I had a great experience playing with all the foreign players.  It was a little stressful with two rounds a day, but I enjoyed the tournament a lot", noted Akshita at the end. WGM Ana Benderac, WGM Keti Tsatsalashvili and WIM Shayesteh Ghaderpour tied for second place with 6 points each. Janyl Tilenbaeva and WGM Yanira Vigoa made up the remaining players for this 10 round double round robin norm tournament. As WIM Ghaderpour highlighted, "It is nice to have tournaments like this in the US, giving chance to chess-players to fight for a norm. I really enjoyed playing this tournament after being away for almost a year from chess. I made good friends and we had an interesting closing ceremony! :)" 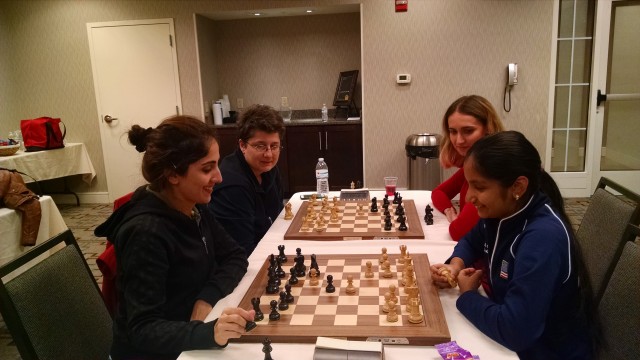 Bughouse at the WGM Norm tournament
Along with the other players, WGM Ana Benderac appreciated having a women's tournament because there are not many and was impressed with the level of play: "As the oldest in the tournament, I need to commend all players but especially Akshita for her good and stable play throughout the tournament." Six different federations were represented in the tournament: USA, Cuba, Serbia, Georgia, Iran and Kyrgyzstan; thereby making the interchanges interesting learning experiences for everyone participating. Janyl Tilenbaeva stated, "I was honored to be invited to play in such a strong tournament and it became my huge "back to chess" step. I had a great time in the competitive yet friendly atmosphere. Thanks to the organizers for giving Women Chess Players both the opportunity and encouragement to fight."
SHARE: