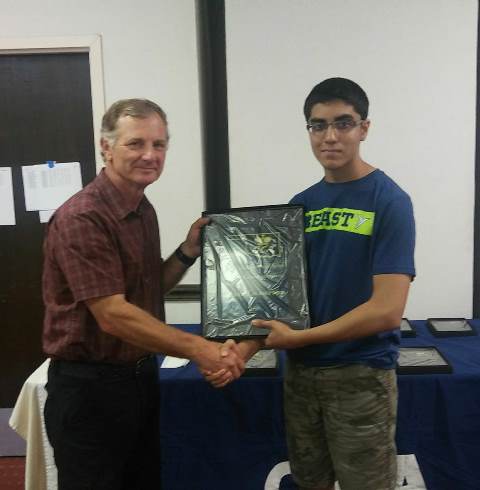 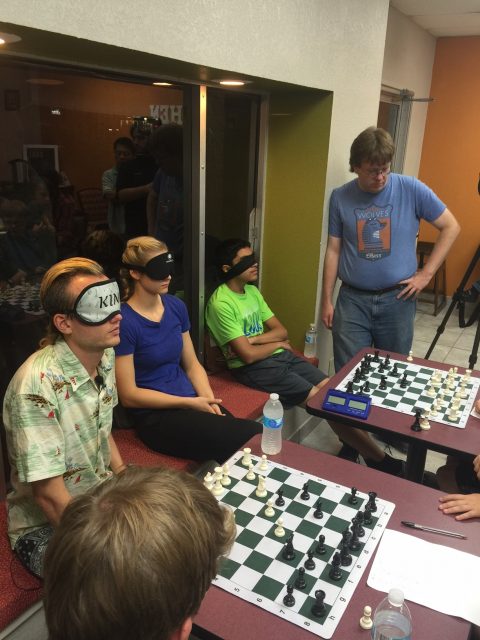 GM Timur Gareyev, top rated Olkahoma female Expert Veronika Zilajeva and Advait. Blindfold exhibition held at Fusion Kitchen, Advait's parents' restaurant
Just a week prior,Advait won the Dallas Chess Club’s FIDE Open  June 17-18 with a score of 4.5 out of 5 points giving him a current 2504 United States Chess Federation (USCF) rating. Patel is the first Oklahoma chess player to break the 2500 point level. His shining moment from the event was defeating Grand Master (GM) Julio Sadorra rated #16 in the US and the top seed at the event. For Patel, this is his second rating record. He was the first Oklahoman to ever possess a USCF chess rating of over 2400. Find Advait's US Chess rated history here.
SHARE:

Great young man, great family. Wishing him all the best on his way to GM!
So, in 2014, he won the State Championship at age 11? Wow! Has any other state had such a young state champ lately?
Also, Advait has achieved SM(Senior Master) status. He is the 1st Oklahomana to have ever achieved this title in Oklahoma chess history.
circa 1989/1990 Michael Mulyar won the Colorado State Championship at age 12- still not quite as young as Advait! Back in 2011 an 8-year old kid made the trip from WV to play in the Tracy Callis Jr Memorial (Roanoke Va) and tied for first in the Amateur Section- and few have been able to stop Advait since!
Awesome job!!! And a very fine young man from a wonderful and loving family!!!!
[…] receiving his last IM norm is probably even more satisfying to him than any prize money.  Tommy Hay, who also wrote an earlier press release on Patel’s accomplishments, said “For the 1st time in Oklahoma chess history, Oklahoma […]