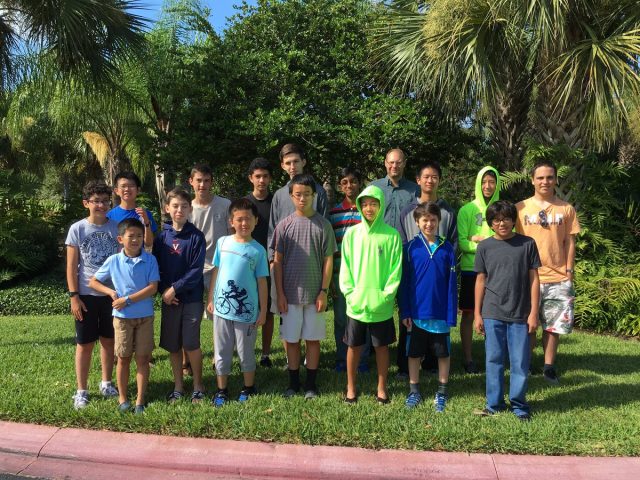 A lot of kids attend camp in the summer. They swim and hike, play sports, make S'Mores and tell ghost stories around a bonfire. So, when I told my friends and family that I am heading off to summer camp, that is exactly what they had in mind. Little did they know that I was off to one of the most intense chess training camps in the country! Having attended one of IM Greg Shahade’s camps in St. Louis the previous summer, I knew what was in store for me, and I was extremely excited to get started. The thirty-sixth US Chess School camp gathered sixteen kids, ages nine-to-nineteen, in a beautiful resort in Orlando, Florida. We all share a love of chess and a commitment to improving our game. Some of us knew each other from many years of playing on the scholastic chess circuit. We were all excited about this great opportunity to learn and play together, away from the pressures of tournaments. Our coach was GM Lars Bo Hansen, an expert on strategic and defensive play. He spent a lot of time talking to us about Stenintz’s theory of balance, attack and defense, calculation, as well as how a player should only plan to attack when he has an advantage. In order to be able to determine whether you have an advantage, you must learn how to correctly evaluate positions! Many players, especially kids, often get nervous when their opponent launches an attack. I should know, I’ve been there many times. If the position is equal, an attack does not necessarily guarantee a win. In an equal position, the attacked does not automatically have an advantage. The defensive player must be careful in evaluating the position, and must continue to play precise and correct defensive moves. Here is an example of a game where white launches an attack in an equal position.

As you can see, even though white was attacking, the position was equal.  However, since black played good defensive moves, the game ended in a draw. This illustrates one of the most important concepts that we learned in camp -- even if you are under attack, don’t panic, evaluate, and trust the balance of the position. 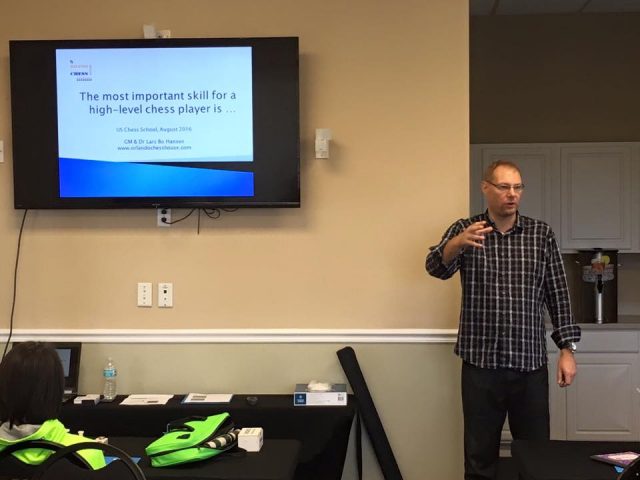 Lars taught us about three types of advantages: material, dynamic and positional.  You must have one or more of these advantages before you begin an attack.  For example, look at this recent game between Boris Gelfand and Wang Yue.

In addition to evaluation, calculation is another very important aspect of preparation that we discussed extensively in camp. You have to be able to calculate thoroughly and precisely in order to execute advanced combinations.  Take a look at this classic game. Many players are familiar with this combination, but do you think you’d be able to calculate the line during a tournament without having seen it before? Many of the chess players in the class had seen this game before, but Lars emphasized how important it is to study the classics, and to review those familiar positions over and over again.  After all, they come up quite often!  Here is a very recent game we looked at from the 44th World Open, played just this year.  See if you can spot some familiar themes. This example showed all of us how important it is to study the classics, because you might find yourself in a similar position, and you can use the ideas, combinations, and skills of the masters who came before us.  Also, this example taught us how important it is to calculate a position all the way through, and not miss any crucial moves. 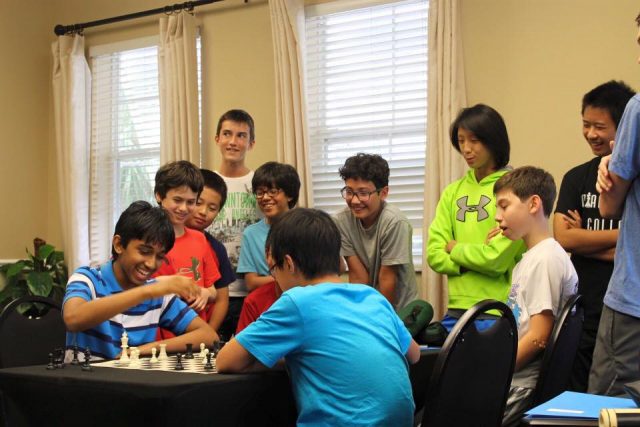 The days that I spent with Coach Lars and Coach Greg, as well as with my fellow chess players, were filled with discussions about interesting positions, strategies, and classic games by our favorite GMs.  They were also filled with a lot of inside chess jokes and fantastic blitz tournaments. Watch the first video of the camp blitz tournament below, and you can find the rest at Greg Shahade's channel.  [youtube Players who are immersed in chess often take for granted some of the fundamental principles of the game, and it was extremely valuable to spend time learning and re-learning some of the most important ideas in chess.  Thank you Coach Lars and Coach Greg for helping me and my friends continue on the path to chess mastery! Find our report on the 35th US Chess School in San Francisco here, and look for a report on a special World Championship edition in New York City coming up next month.  You can find more info on the USCS on its website, facebook and twitter pages.