The penultimate twelfth round of the 2022 U.S. Chess Championships witnessed a momentous change in the leader spot of the U.S. Women’s Championship, while in the U.S. Championship the top two places remained constant as various shifts (and even hijinks!) took place among the near-leaders.

The headline of the day was the second player in the standings, GM Irina Krush, winning with Black against the leader WGM Jennifer Yu. 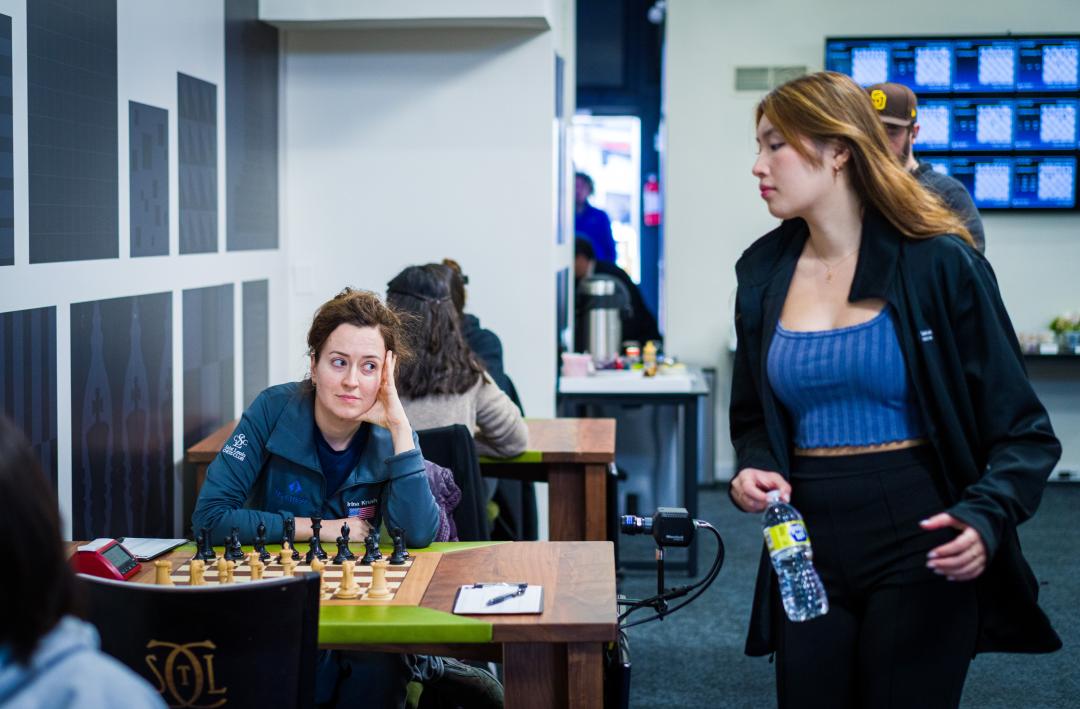 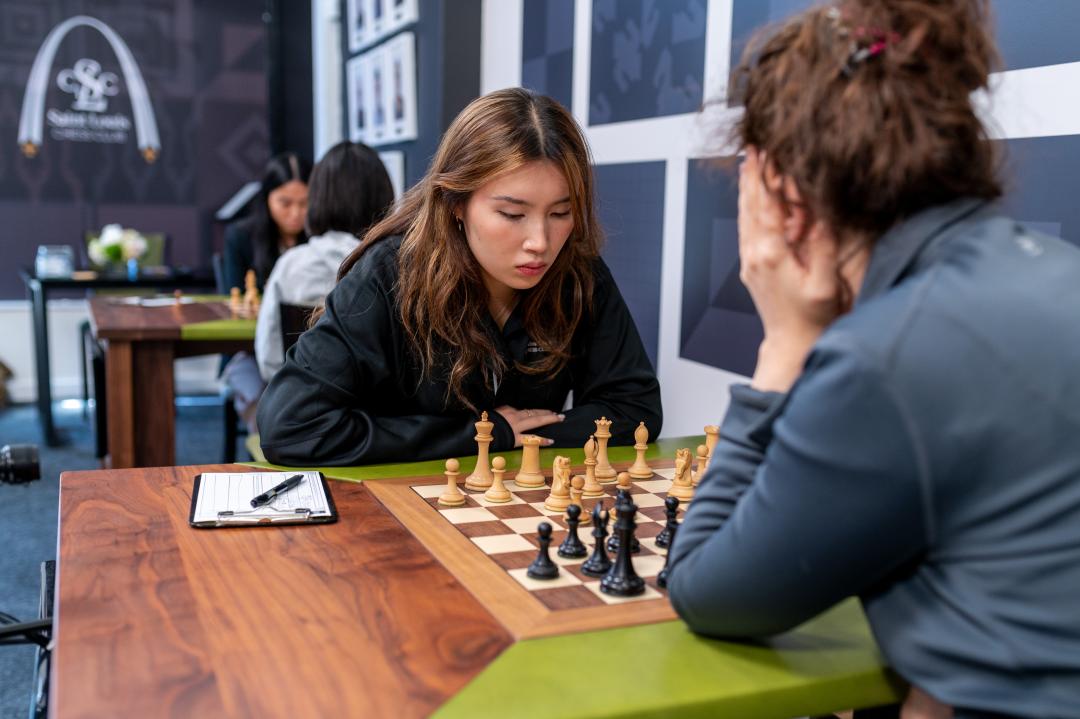 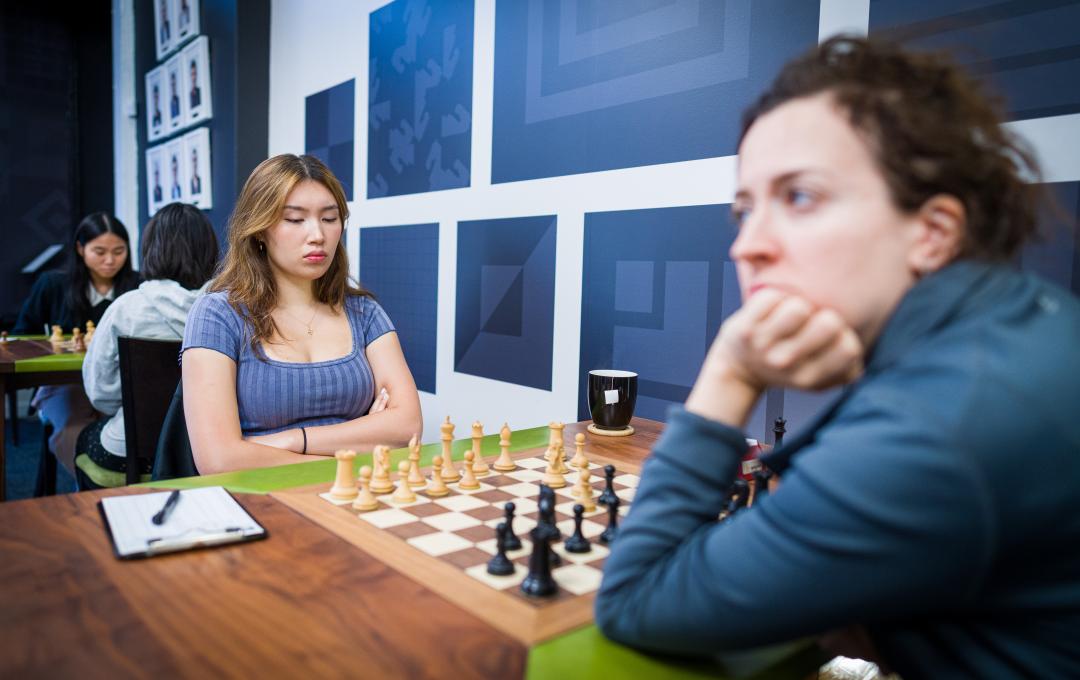 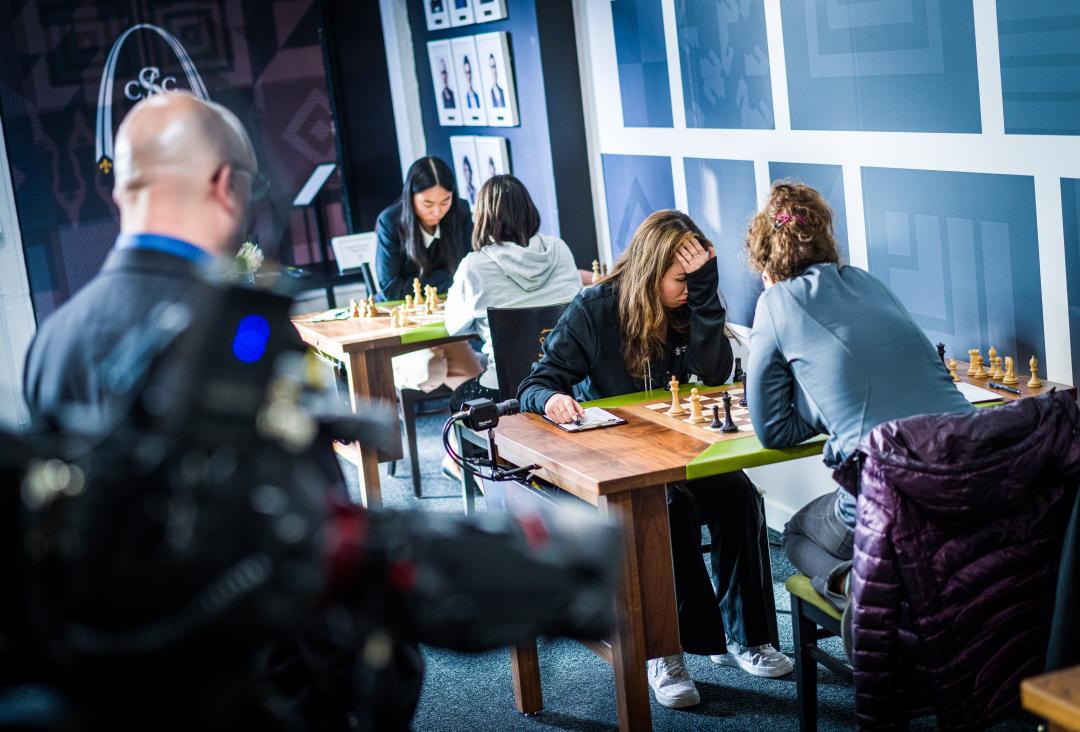 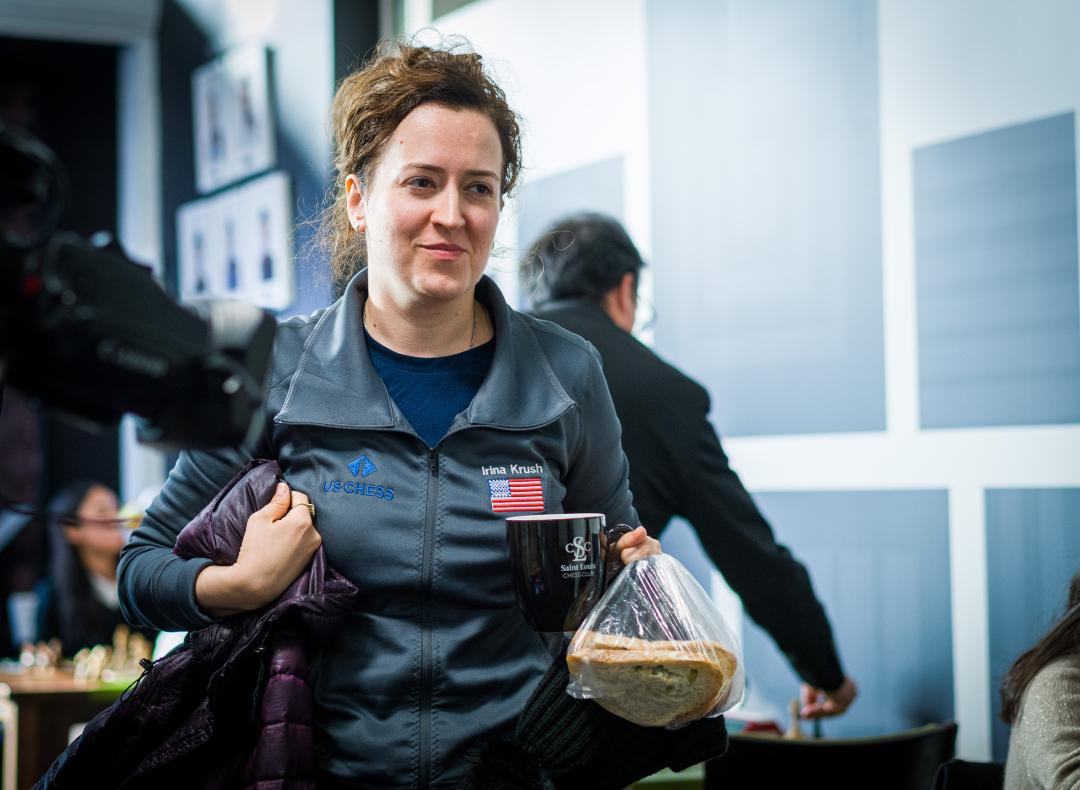 Krush later described her attitude going into this game as “You can’t expect anyone else to do your work for you.” But as it turned out, in order to win the game Krush needed some help from her opponent after all:

This win allowed Krush to leapfrog Yu and become the new leader with 8½/12, while Yu remained at eight points and is now a chaser. 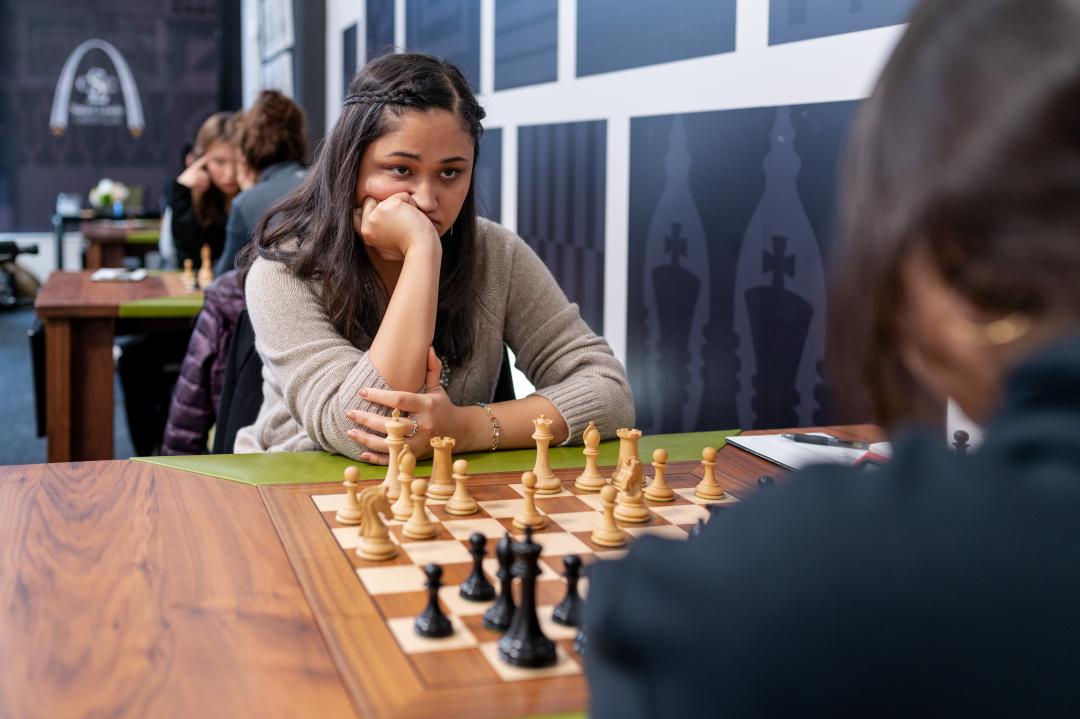 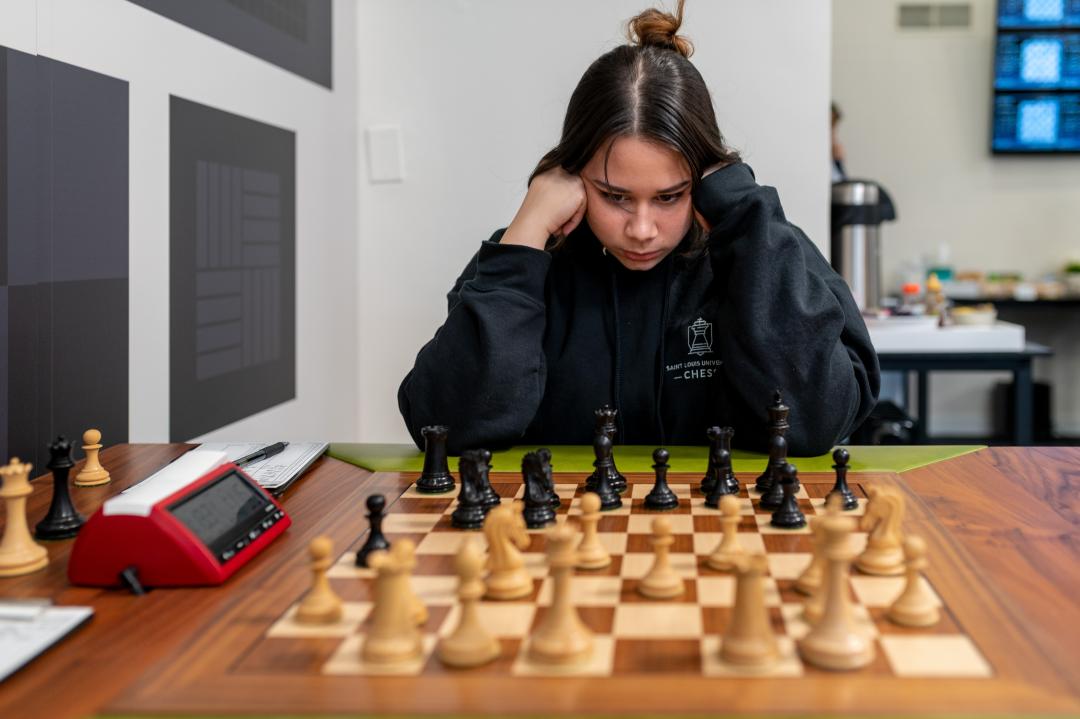 Meanwhile, FM Thalia Cervantes Landeiro delivered a powerful win as Black against WGM Gulrukhbegim Tokhirjonova, turning her into another close chaser with 8/12:

This was a fifth consecutive win for Cervantes Landeiro, prompting commentator GM Yasser Seirawan to try to recall another example of such a streak of wins in the U.S. Championships. Of course, he quickly remembered Bobby Fischer’s historic 11-0 sweep of 1964… 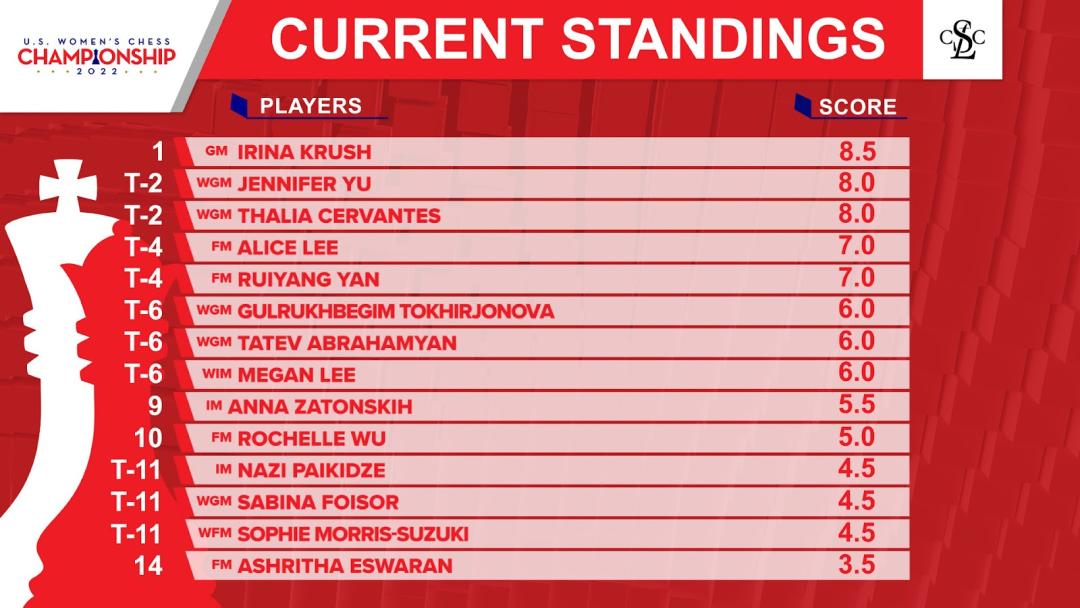 In the final and thirteenth round on Wednesday, Krush (8½) will have White versus IM Anna Zatonskih (5½). A win for Krush will secure her clear first place in the final standings. If Krush does become this year’s U.S. Women’s Champion, it will be her ninth time winning the event. This would equal Gisela Gresser’s all-time record of most U.S. Women’s Champion titles, a record which has stood since 1969.

The final round will also see Cervantes Landeiro, playing White, face off with Yu. If Krush draws her game, then a decisive result between Cervantes Landeiro and Yu would mean that the winner of that game catches up with Krush, triggering a tiebreaker for first place.

It should be mentioned that Yu recently demonstrated her tiebreaker skills in the 2022 U.S. Girls’ Junior Championship in July, emerging victorious from an unusual three-way tiebreaker with WFM Sophie Morris-Suzuki and Cervantes Landeiro herself. If it comes to that in this tournament, her high-stakes experience may prove a valuable asset.

The U.S. Championship did not see a shakeup at the top, although leader GM Fabiano Caruana remarked that he “was under a lot of pressure” as Black against GM Sam Shankland. The game was nevertheless drawn without any serious danger, as was GM Christopher Yoo’s symbolically swashbuckling effort against the runner-up in the standings, GM Ray Robson. Caruana, with 8/12, remains half a point ahead of GM Ray Robson, who is at 7½/12. 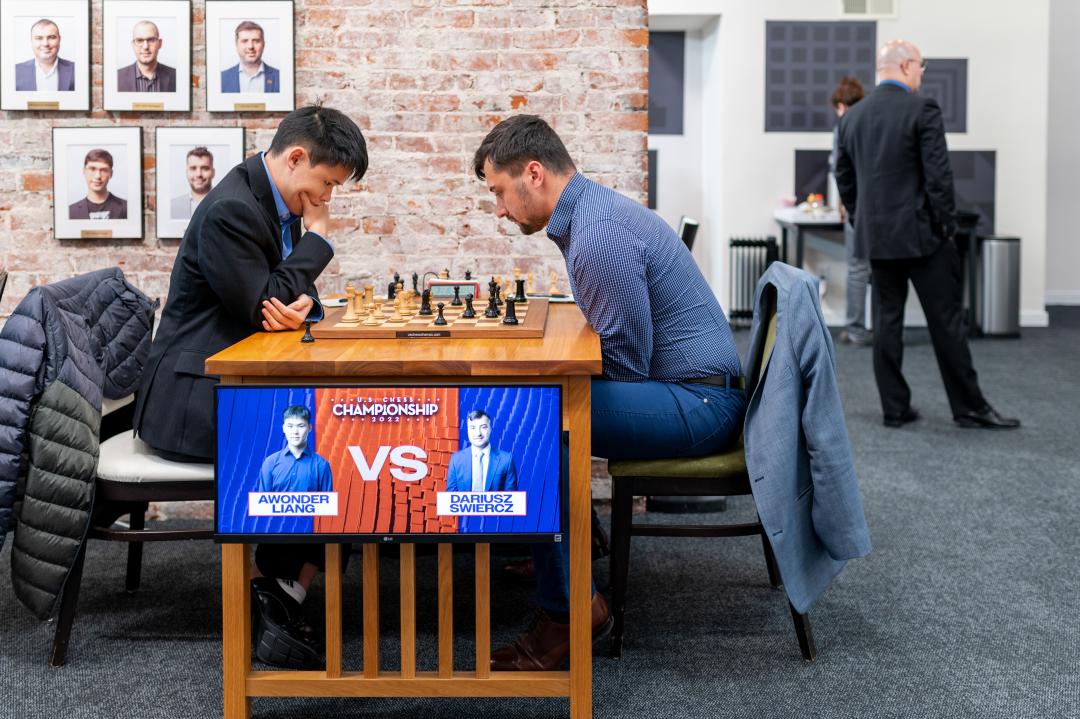 Joining Dominguez Perez on 7/12 is GM Awonder Liang, who finessed a win from a drawn rook ending against GM Dariusz Swiercz:

It was in this game that there occurred an incident truly unprecedented in the annals of tournament chess:

While Niemann was on move and deep in thought, Sevian inexplicably picked up Niemann’s king and started twiddling it with his fingers! Not only that, but he even accidentally broke the finial off of the king! This was all apparently in some sort of absentminded trance. 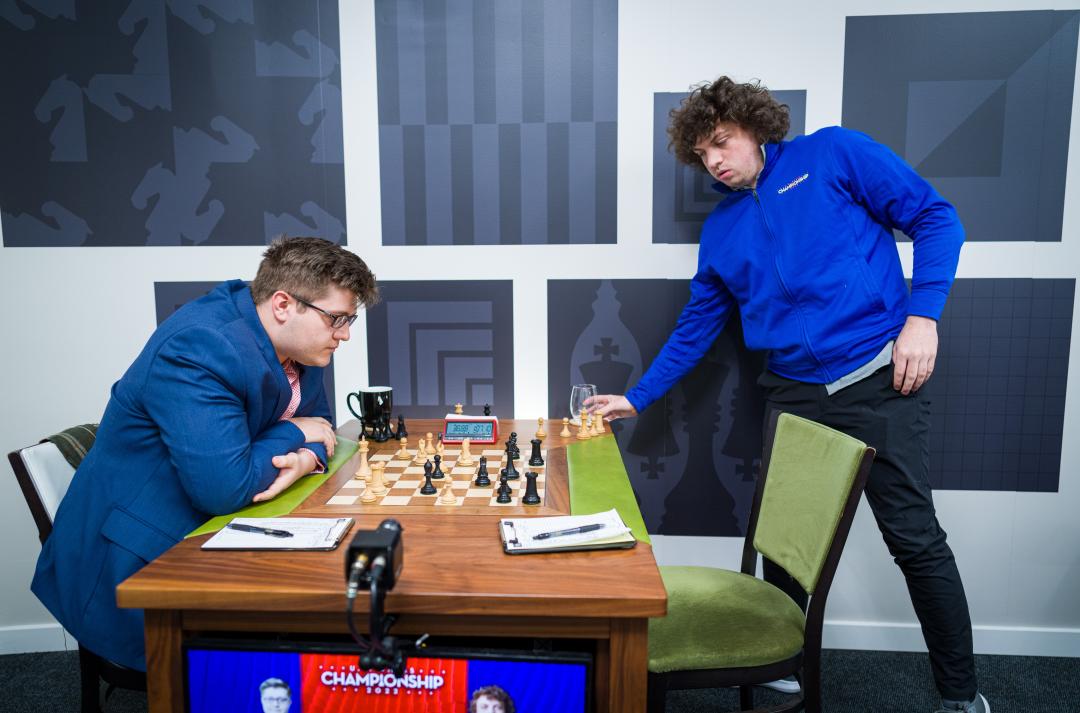 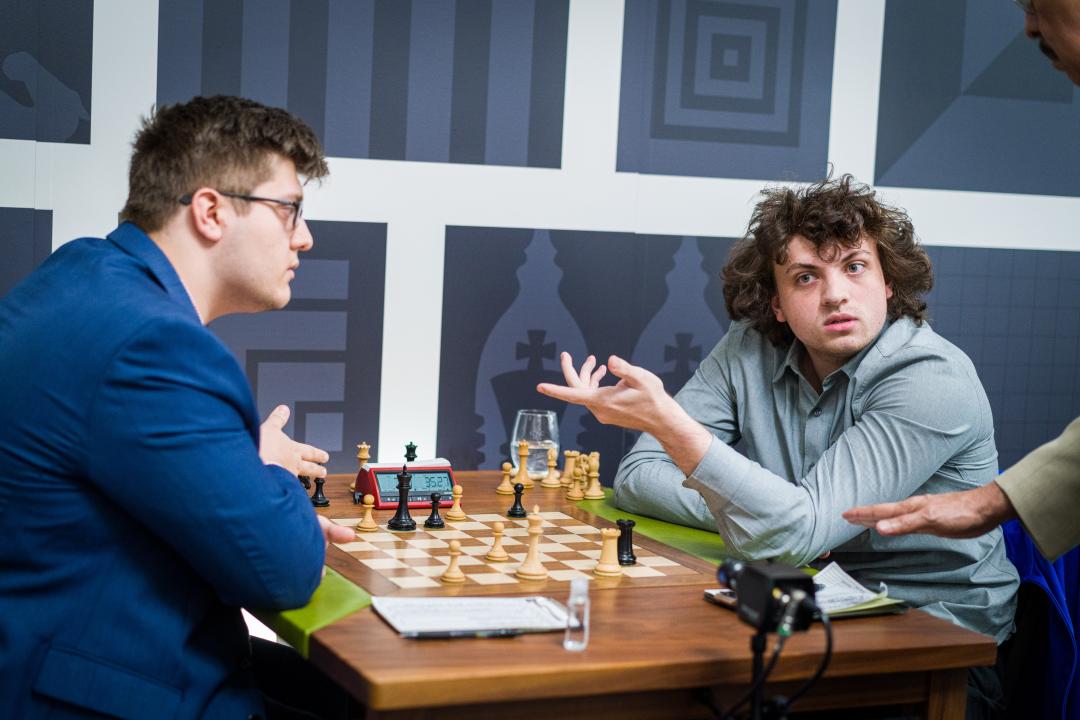 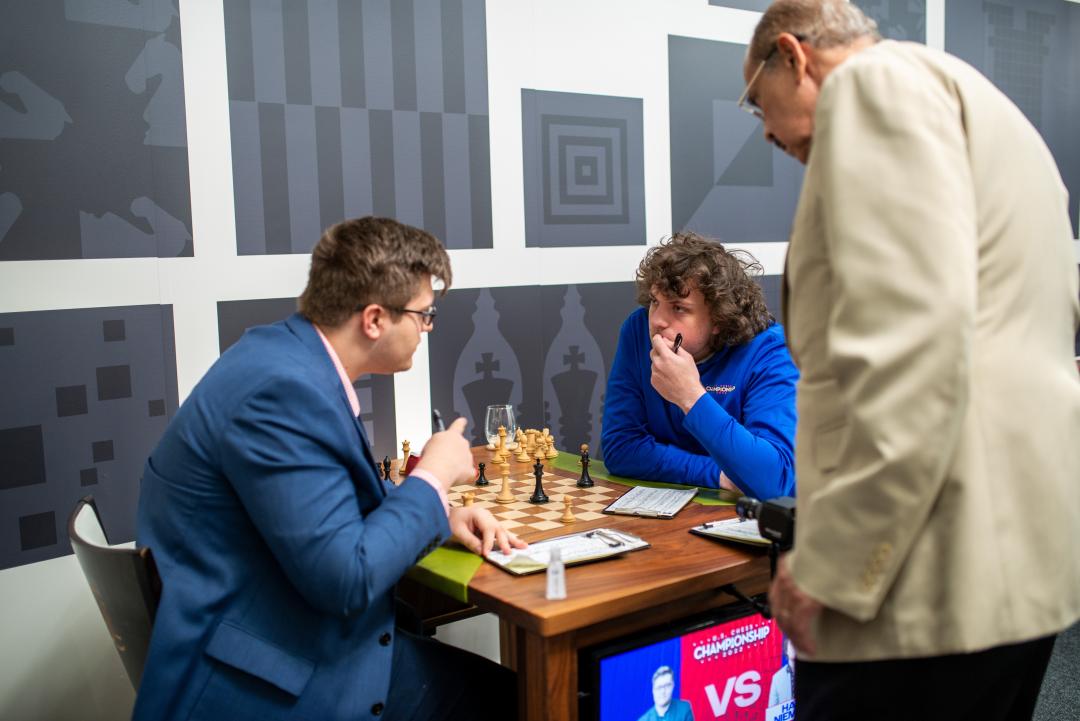 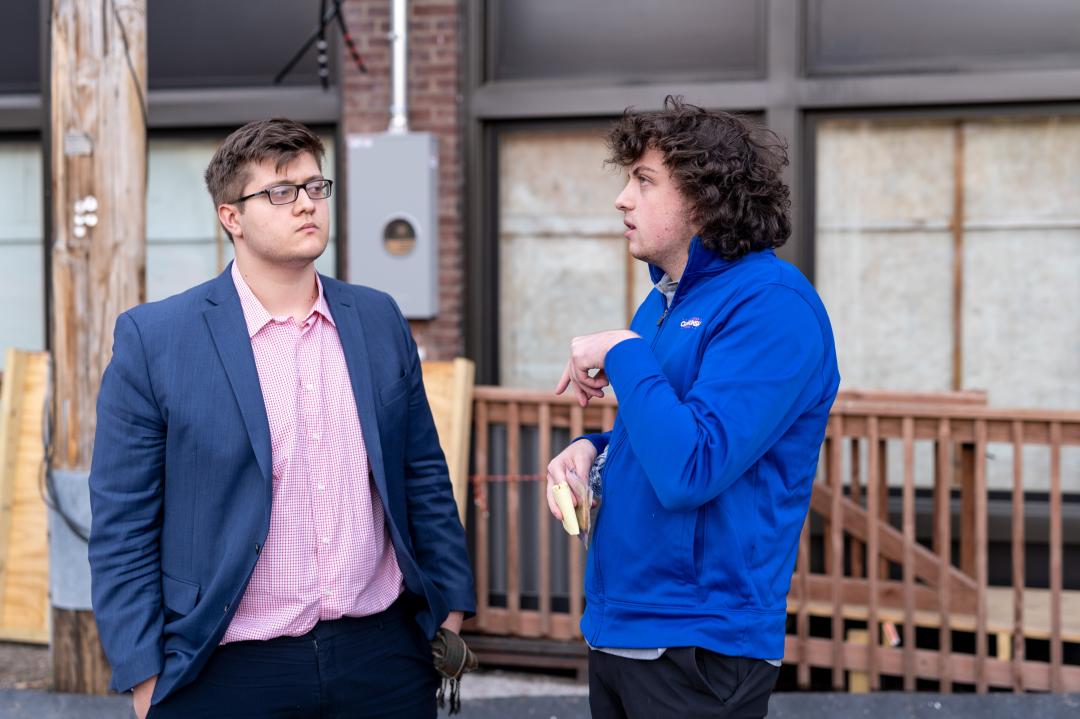 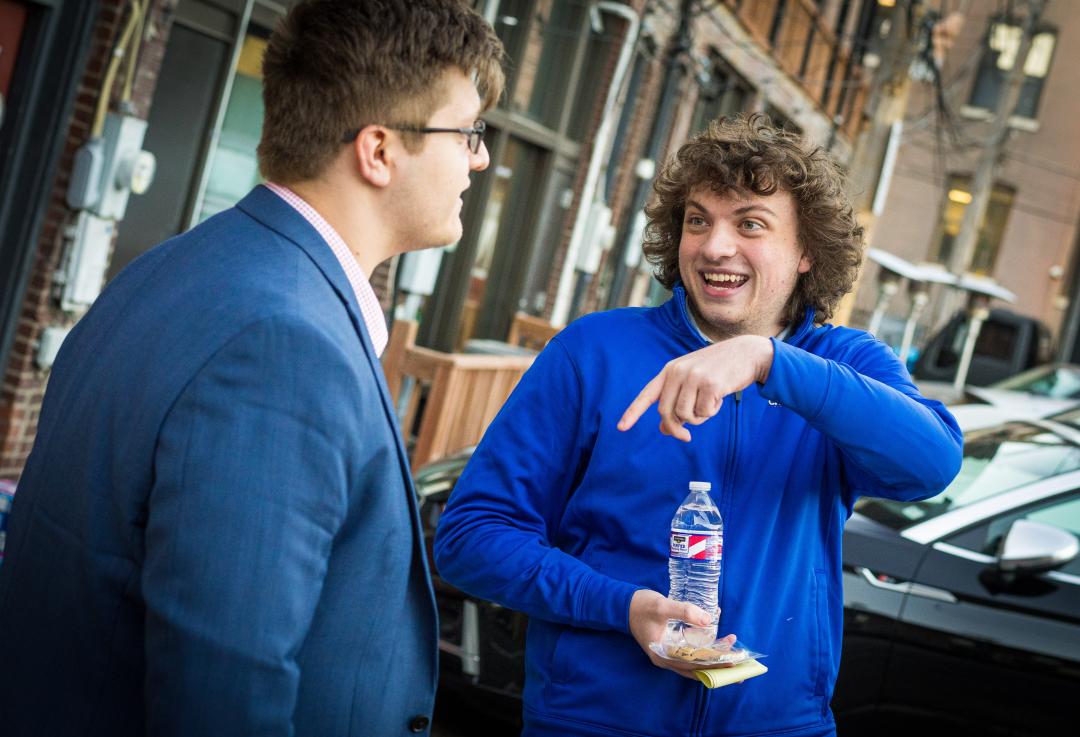 Niemann was understandably bemused, while Sevian looked more confused than anything. The arbiter was called to the board, the situation was quickly resolved, and the game continued without further incident. Nevertheless, the video footage of the whole short scene predictably became a major source of amusement on social media, with one Twitter commentator calling it “the most Freudian [thing] you’ll ever get to see”. Official commentator GM Cristian Chirila quipped, “seen some wild moments in my chess career, but this one takes the crown”. 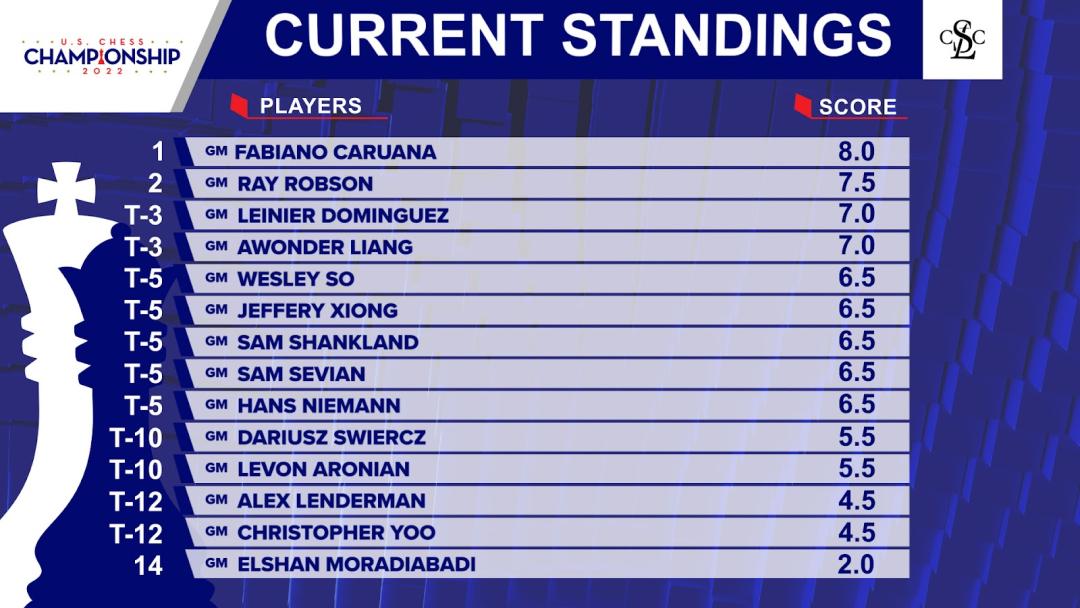 This game had significance beyond its over-the-board antics, since now the only players in theoretical contention for first place are Caruana (8/12), Robson (7½), Dominguez Perez (7), and Liang (7). None of them will have easy pairings in the final thirteenth round:

Caruana can guarantee clear first with a win, or even with a draw if Robson does not win. The two players with seven points will only have chances to tie for first if Caruana loses.

It all comes down to the final round! Tune in for live coverage and keep an eye out for a final report by FM Nate Solon.