A few weeks ago, I made an announcement about a new competitive chess league in the US - the States Chess Cup. We now have all of the details finalized for the league, and the first matches started on September 8th! You can find a complete set of rules and information about the event here, but I’ve written up a quick summary of the league information below.

There are 30 states represented in the league, and states will be split up into four divisions of: 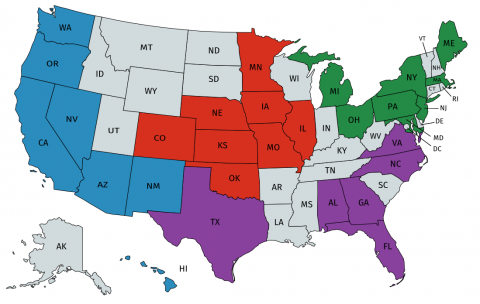 The States Chess Cup will consist of a seven-round regular season, with a three-round playoff bracket. Each team will play one game a week, against every other team in their division, and the top two teams from each division advance to the playoff bracket. A preliminary schedule with all the matches can be found here. However, note that team captains may reschedule matches based on team availability, so be sure to check the schedule often for any changes!

The match format is based on the PRO Chess League. Each team will select a lineup of four players for each match, with an average USCF Classical rating under 2200. Each player will play four games of 15+2, one against each opponent. Whoever gets more points overall wins the match!

Missouri Captain Adam Whitaker has set up a website where we will blog weekly updates on the league. You can check it out at https://stateschesscup.wordpress.com/.

If you have any questions, send us an email at stateschesscup@gmail.com.