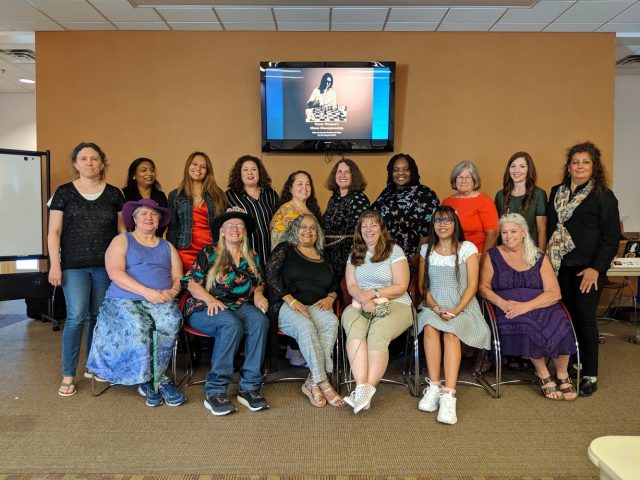 2019 TWCC participants (photo Louis A. Reed, Jr)
Nicole Niemi and I both scored 3.5 of 4 at the 2019 Texas Women’s Chess Championship (TWCC). We each won our first three games and then we drew each other in the last round. That game, annotated by me, is at the end of this article. An unannotated, video version of the game is available on Twitch. Niemi got the first place award on tiebreaks and is the 2019 Texas Women’s Chess Champion. Other prize winners are listed here and also here. 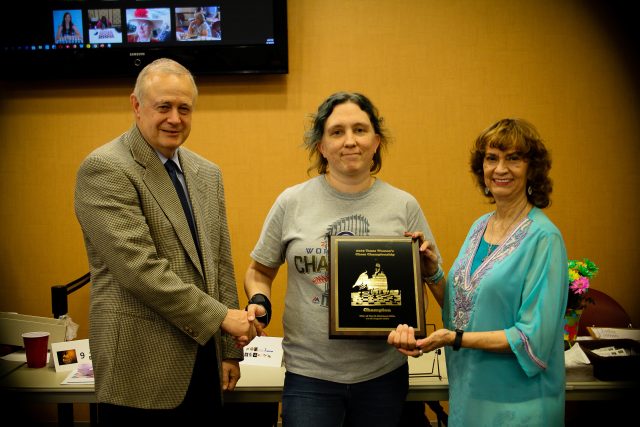 Tom Crane, Tournament Winner Nicole Niemi, and Dr. Maritta Del Rio Sumner (photo Sheryl McBroom)
At the Saturday night banquet for players and supporters, TWCC organizer Jim Hollingsworth told a version of the starfish story. Walking along a beach covered by thousands of dying starfish, a first man asks a second man why he throws starfish back into the ocean. The second man answers that he can’t save all of the starfish, but it’s important to save those that he can. Hollingsworth said, “There are about 2,000 US Chess-rated players in Texas. 250 of those are women ages 16 and older eligible to play in this tournament. We can’t help the other 234 who aren’t here today, but we can provide an epic tournament to the 16 that traveled here from all parts of Texas.” After the 2018 TWCC concluded, Hollingsworth began asking for contributions for the 2019 TWCC, either money or in-kind donations. Among the in-kind donations for 2019 were crocheted starfish made by participant Wendy Reed and by Jo Ann Crane, wife of Texas Chess Association President Tom Crane. Tom Crane donated US Chess Women merchandise to each participant. Two other in-kind donations came from chess supporters thousands of miles away from the TWCC tournament site, which was the North Richland Hills Public Library. Mike Bowden’s tweets got the attention of London (UK)-based Leon Watson of Chessable. Watson said via email:

We’ve been blown away by the Texas Women’s Chess Championship so it was no-brainer as far as we’re concerned to help them, albeit from afar. We just want to support any grassroots chess event that gets people involved, and the TWCC is exactly that. As everyone knows, women’s chess all over the world needs a bit of a push to get going. We need more events like the TWCC. Chessable is 100 per cent behind this, we are all about getting more people into chess from whatever background or demographic, whether it be age, gender, whatever. 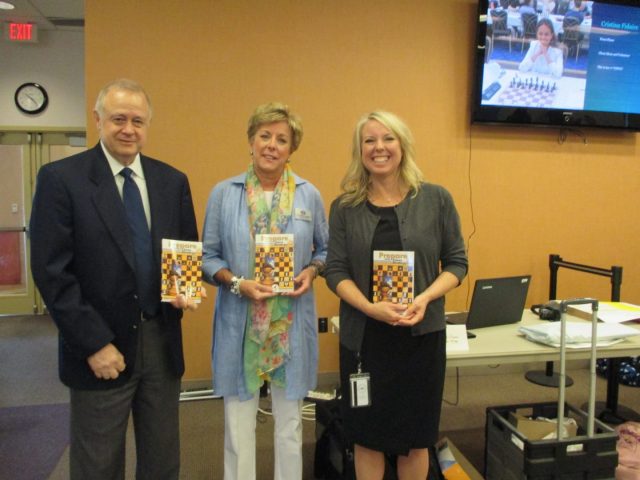 Tom Crane, Rita Wright Oujesky, Cecilia Hurt Barham (photo Alexey Root)
Sztaray and WIM Ruth Inez Haring’s son Theodore Biyiasas inspired Hollingsworth to create an award in Haring’s name, which he presented at the banquet to the TWCC participant who most exemplifies Haring’s service to chess, Brenda Hardesty. This Texas Chess Association Facebook posting details Hardesty’s service to chess. I met Brenda Hardesty (and her husband Danny and their son Doug, born 1985) when her family and my family both lived in Austin, TX in the early 1990s. Brenda Hardesty was a chess organizer and tournament director and also a La Leche League (LLL) leader. She remembers my nursing my daughter Clarissa at a LLL meeting that she led. In 2006, when Doug was away at college, Danny and Brenda Hardesty moved to El Dorado, TX, which she says currently has around 1,300 people. Brenda put up flyers at Lowe’s Market (a grocery store in nearby Sonora, population 2,766) announcing an El Dorado Chess Club. About two years ago, one of those flyers got the attention of veterinarian Patti Strauch, as her practice is in Sonora. Since Sonora and El Dorado are only 21 miles apart, Strauch and the Hardestys meet regularly for chess games and have become friends. They carpooled 4.5 hours (one-way) to the 2019 TWCC, which was Strauch’s first time ever playing in a chess tournament. Brenda Hardesty also donated $50 to the 2019 TWCC. 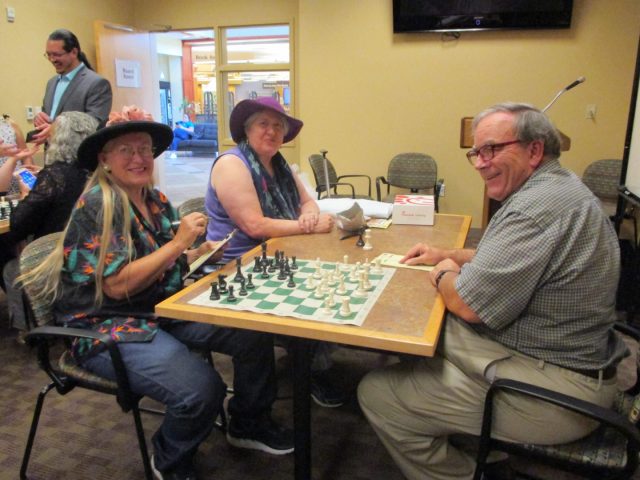 Patti Strauch and the Hardestys (photo Alexey Root)
Other participants also traveled great distances and made substantial donations to the event. Participant Renate Garcia and her children (Chief Assistant Tournament Director Klaus Garcia and Deputy Master of Ceremonies Anneliese Garcia) are from El Paso, an 8.5 hour drive. Via a fundraising tournament by their Crusader Chess Club and personal monies, the Garcias donated over $350 to the 2019 TWCC. The Homeschoolers Chess Club ran a fundraising tournament, coordinated by former Texas Chess Association President Eddie Rios and Margaret Bailon-Labednick, that raised $320.00. Bailon-Labednick traveled from Corpus Christi (a 5-hour and 40 minute drive) to participate in the 2019 TWCC. A complete list of donations is available at the 2019 TWCC website, which also has biographies and photos of each participant. Soon, that website will also have the games from each of the four rounds of Game/60 with a 5-second delay. As mentioned at the start of this article, I played my last round game against Nicole Niemi. Niemi is a LVN working for Epic Health Services. I am a lecturer for The University of Texas at Dallas. Last year, in my article on the 2018 TWCC, I annotated my win as White against her. Here are my annotations for my draw as Black against Niemi at the 2019 TWCC. After running both the 2018 and 2019 TWCCs, Jim Hollingsworth is retiring as its organizer. If you are a Texas organizer interested in running the 2020 TWCC, contact Texas Chess Association President Tom Crane with your bid.
SHARE: