10 Lessons Learned from the 2015 Sinquefield Cup

GM Ian Rogers covers ten key lessons learned at the 2015 Sinquefield Cup, from "Chessplayers Just Wanna Have Fun" to "Aronian's hangover is over, Carlsen's is not." 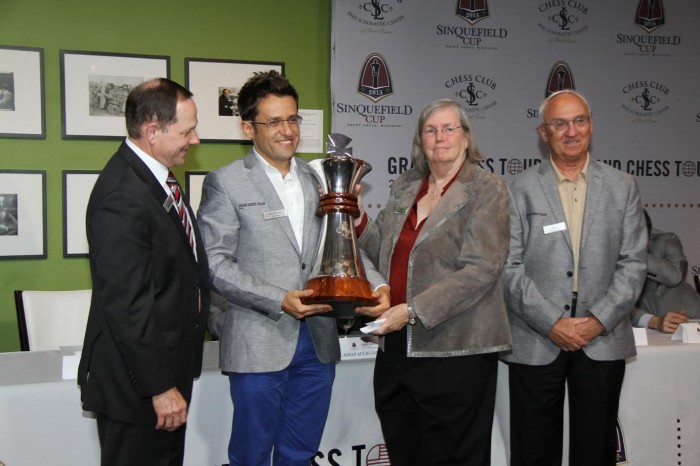 The Mayor Francis Slay, Sinq Cup Champ Levon Aronian and the Sinquefields, Photo Cathy Rogers
The 2015 Sinquefield Cup was all that had been hoped of a tournament featuring so many of the world's leading players. Levon Aronian secured a deserved victory but few of the other players would have left Saint Louis better than satisfied with their performance. Spectators and commentators, however, had a whale of a time watching an epic tournament. Here are ten lessons which this writer learned from the 2015 Sinquefield Cup. 1. Aronian's hangover is over, Carlsen's is not. Aronian admitted that it took him a long time to recover from the disappointment of his performance at the 2014 Candidates tournament in Khanty Mansiysk, where he was favourite but finished well behind Viswanathan Anand. Aronian suspects that Carlsen may be suffering from a similar hangover after his shocking first round loss in Norway Chess in June (when Carlsen lost on time in a winning position). A tie for second place in this field is far from a disaster but Carlsen was (rightly) highly critical of his own play, with the lucky second round win against Caruana and the poor technique which allowed an easy win to slip against Nakamura standing out. Aronian, in contrast, could not have been happier, tweeting the following video in celebration. [youtube https://www.youtube.com/watch?v=c_i2mC76kAY&w=560&h=315]   2. Hikaru Nakamura is World Number 2 - and deservedly so After wins in Gibraltar, Zurich, Khanty Mansiysk and the US Championship this year, plus second place finishes in Stavanger and the Sinquefield Cup, Nakamura is the most consistent player of 2015 so far. Nakamura's 5/9 score was achieved the hard way, playing 100 more moves than any other competitor. Tough endgame losses to Topalov and Aronian were counterbalanced by wins against Anand and So - the latter game being the tournament brilliancy. However it was his final round marathon against Grischuk that earned Nakamura the most kudos; the American took great risks but ultimately prevailed after more than six hours. [fen]4nRr1/4P2k/2P5/8/8/7K/p7/B7 w - - 0 75[/fen]

Nakamura has Grischuk tied in knots but White's clock ran down to just 3 minutes before Nakamura found the only way to increase the pressure: 75.Kh4! Suddenly Black's king is in a mating net and 75...Rg1 fails to 76.Rh8+ Kg6 77.Rg8+. 75...Nc7 76.Kh5! Ne8 77.c7! 1-0 The most stylish finish, though the immediate 77.Rf7+ was also winning. 3. Goats Are Great Tactician When asked how he would spend his prizemoney, Fabiano Caruana said that he would buy a goat, because he could afford it and because it would see tactics better than he did.

Caruana was thinking of a few big misses which got his goat - or which his goat would have got - most notably: Aronian-Caruana, Position after 28.Rf1!! [fen]3qr3/2p3kp/1pP5/r2PpbNQ/p1B5/P7/1Pn3PP/5RK1 b - - 0 28[/fen] Caruana had eaten everything offered to him by Aronian - clear goat-like behaviour - yet here realised that he had missed that his intended defence 28...Bg6 failed to 29.Rf7+ Kg8 30.Qh6!!. He was forced to choose 28...Qf6 after which Aronian in his own words "had a million wins" and chose 29.Ne6+ which soon secured the point. Caruana-So, Position after 20...Bf8 [fen]1q2rbk1/1brn1p2/pp1ppnp1/6N1/2P2B1Q/1PN4B/P3PP1P/2RR2K1 w - - 0 21[/fen] Caruana, who knew that he was well on top, played 21.Rxd6!? and ultimately drew after a topsy turvy game. Caruana believed that 21.Bxd6 Bxd6 22.Rxd6 would lead to nothing after 22...Rxc4 23.bxc4 Qxd6 yet even when told by commentator Maurice Ashley and his trusty computer that there was something to be found after 23...Qxd6, Caruana nonetheless failed to discover 24.Qh8+!! which would have ended the game. 4. So Loses in Style Wesley So suffered a baptism of fire at the Sinquefield Cup, dropping out of the top 10, but by the end of the event the 21-year-old was already looking more resilient and ready to move from victim to superhero. So's highlight reel was impressive, even if he was on the wrong side of the board most times. So-Aronian, Position after White's 27th move [fen]2r2rk1/b4ppp/p4q2/P2Ppb1P/3pB3/1N6/1P3B1P/RQ4KR b - - 0 27[/fen] 27...Qg5+! 28.Kf1 Qf4!! 0-1 On 29.Bxf5, d3 30.Qe1 Rc2 decides. So-Nakamura, Position after White's 34th move [fen]r5k1/3R4/p2p3q/1p1Pp1n1/6Kn/N2Nb1p1/PPQ1B2P/5R2 b - - 0 34[/fen] After sacrificing two pawns, a piece, then an exchange, Nakamura has a winning attack and finishes in style. 34...Nhf3! 35.Nf2 Qh4+ 36.Kf5 Rf8+ 37.Kg6 Rf6+! 38.Kxf6 Ne4++ 39.Kg6 Qg5 Checkmate! 5. Anand is the Last of the Mohicans Being Anand in the modern chess world must sometimes make you feel very, very old. At the end of the tournament a special screening of the film Pawn Sacrifice was arranged. For most of the players Bobby Fischer and Boris Spassky are merely historical figures like Capablanca and Morphy. Anand was the only one of the Sinquefield 10 who played Spassky, and he also met Fischer in Iceland. In addition, when the last round concluded, the many youngsters in the field celebrated the end of a tough event by playing chess long into the night, with the serious blitz contests involving the World Champion and a goatherd starting only at 1am. Probably the only reason Anand would pull an all-nighter nowadays would be if his young son Akhil was feeling unwell. 6. The 2015 Sinquefield Cup Will Go Down in History Rex and Jeannie Sinquefield had already created something special with the 2013 and 2014 Sinquefield Cups but the 2015 event will be hard to beat. The chess world has been spoilt for super-tournaments in recent years, but the 2015 Sinquefield Cup, with 9 of the top 11 players in the world, pushes it into a category of historic tournaments, up with AVRO 1938 and Las Palmas 1996. No doubt FIDE ratings will continue to inflate, the general level at the top will go higher and categories of tournament will go up. However events which contain only the very best of their era are rare indeed and the 2015 Sinquefield Cup should be counted among them. 7. Spectators Like Their Free Food More than 300 people, a record, turned up for the autograph signing on the first day. However spectator numbers - while the envy of most elite tournaments around the world - were significantly down on 2014. The major difference seemed to be that in 2014 the $15 entry ticket entitled the chess fan to a smorgasbord of culinary delights, with a different national cuisine offered each day. In 2015, the tickets had been reduced to $10, offering free drinks and half price food choices at the Kingside Diner; still great value, but not enough to fill the two commentary rooms on weekdays. 8. The World Chess Tour Scoring System needs Some Tweaking for 2016 After two of the three World Chess Tour tournaments, Veselin Topalov - first in Norway, sixth in Saint Louis, leads from Hikaru Nakamura (equal second twice, both times third on tiebreak). Stranger anomalies occur further down the list, with Carlsen ahead of Giri despite having scored two points fewer overall. Using 'most losses' to break the tie for second in Saint Louis strongly favoured the less consistent Carlsen, but with tens of thousands of dollars at stake is hardly an ideal system. 9. The Chess World Versus The Real World Of late, when the world reads news items about Saint Louis they tend to involve violence, racism and riots, so the success of the Sinquefield Cup and the obvious fondness that the players hold for their time in Saint Louis provides an important counterbalance to the city's international image. The Central West End, with its outdoor dining and leafy streets (as well as the Saint Louis Chess Club, the World Chess Hall of Fame and the Kingside Diner), could almost be mistaken for a cosmopolitan European city and nearby Forest Park and the Saint Louis Zoo are impressive indeed. Yet there were some small signs of tension in the city entering even into this peaceful part of the city. The tournament venue often had an armed security guard outside it, there were far more sirens from emergency vehicles than in 2014, while on the first Friday of the tournament the players' hotel felt the need to provide a note to guests warning them of possible weekend demonstrations. 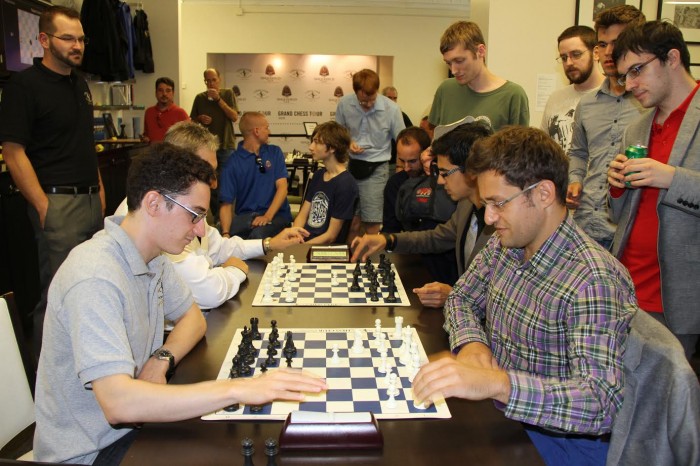 Bughouse with the World's best, Photo Cathy Rogers
10. Chessplayers Just Wanna Have Fun The Ultimate Moves exhibition match was the main event on the final day but it was noticeable both before and after that, for the youngsters at least, too much chess was never enough. From Giri showing Caruana how bullet chess should be played before Ultimate Moves, to the awesome bughouse team of Aronian and Giri beating all-comers afterwards, the Saint Louis Chess Club was alive with chess clock assaults and laughter. With all the work required to become a world class player, it was great to see that the Sinquefield 10 have not forgotten how much fun it is to just play chess.
SHARE: