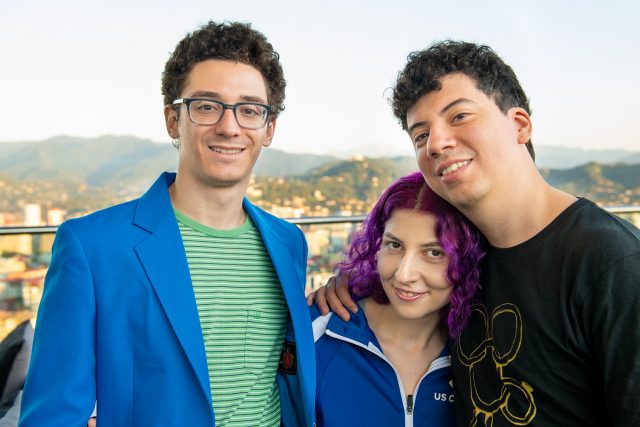 Rest day with a View: Fabiano Caruana, Tatev Abrahamyan and Alejandro Ramirez, Photo David Llada
Round Six is always a tough one in the Olympiad. The rest day is used for recharging energies, and for many of the teams – especially the ones traveling with one or multiple coaches – it is time to specifically prepare for the opponents. During the rest day, team USA had a wonderful dinner at a local restaurant, taking a break from the typical routine of waking up, eating breakfast, preparing, eating lunch, going to the round, eating dinner at the hotel, and wait for the next round. Georgian food is absolutely great, with traditional dishes that have been around for thousands of years! Whether it is Khachapuri or Khinkali, we have been surprised at the quality of food everywhere in this city. 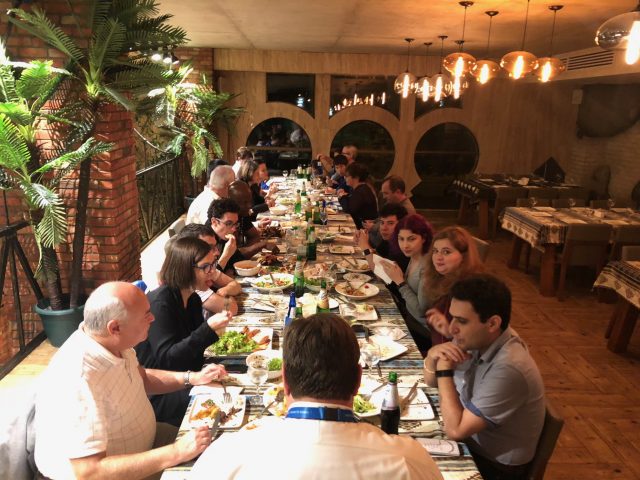 Both of our teams had very different calibers of opponents. The Women’s section emerged after five rounds as the only team with perfect match points, and had the extremely strong team of India as their opponents. Coached by renowned author GM Jacob Aagaard, it was obvious that this was going to be a tough one. 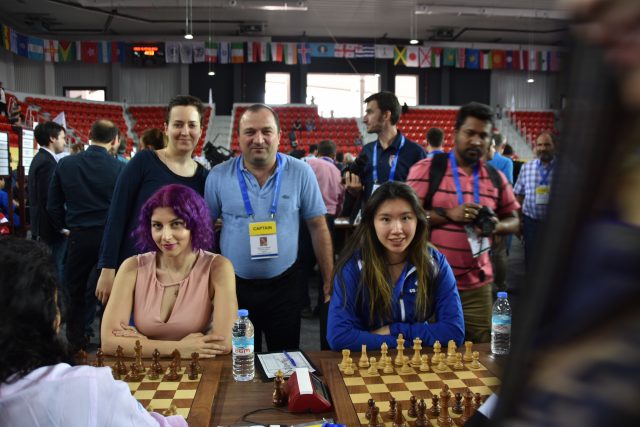 USA vs. India match, Photo Alejandro Ramirez
This tournament marks the return of Indian superstar Grandmaster Koneru Humpy to chess. She has had a superb tournament so far, 3.5/4 against fairly strong opposition. Today she played another great game, playing a heavily theoretical duel against Anna Zatonskih. Despite this, both players used a heavy amount of time to reach a position which Mamedyarov has already essayed twice with White, both ending in draws. Zatonskih's f6 push was ill-timed (never play f6!), and her position became somewhat uncomfortable. Koneru put pressure on her opponent, and in the key moment Anna missed an only move to keep the game going, and collapsed under time pressure. 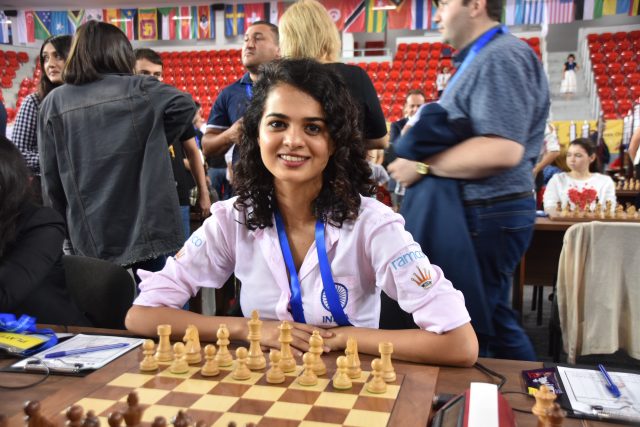 IM Tania Sachdev, Photo Alejandro Ramirez
Next to finish was Tatev Abrahamyan’s game on board three. It is always difficult to play against a friend, but Tania Sachdev was definitely playing her best today against Tatev. The game was a complex Nimzo Indian/Queen’s Indian type of position, but it was clear the Sachdev had a slight upper hand. With the game opening up, Black must have underestimated how powerful (instead of weak) the pawn on a7 was. After some inaccuracies, Tatev had to resign. 2-0 India. 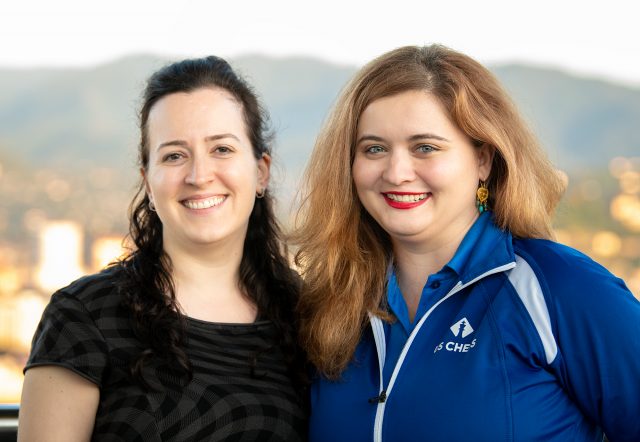 Irina Krush and Sabina Foisor on the rest day, Photo David Llada
Things, however, looked extremely good for team USA in the other two boards. Irina Krush continues an excellent performance on board two. Her opponent, Grandmaster Harika Dronavalli is a three-time bronze medalist at the Women’s World Championship. As soon as black got a position with an isolated pawn, in which she was going to suffer the entire game, coach Robert Hess exclaimed: “This is such an Irina position!” As Irina herself explains: “I got the kind of game I was looking for: White is slightly better and can play for a win without any risk.” Asked when her opponent totally lost the game, she said that it was difficult to pinpoint, as things got gradually worst for her opponent. Once White’s king got to d4, it could have been Capablanca that took over the game: it was simply immaculate. Jennifer Yu on board four faced strong Eesha Karavade, an International Master and outrating our board four by about a hundred points. If someone showed me this game, and told me that Vladimir Kramnik played it with White, it would not shock me. Jennifer playing a game worthy of an endgame book, masterfully converting a rook and opposite colored bishop endgame up a pawn. The systematic advantage that White obtained straight from the opening was converted into a clean win, and USA gets a nice result: with all the games won by white, India and USA split the point. USA remains at the top of the standings, now joined by Armenia after defeating Russia in a big upset, and Georgia 1 that beat Georgia 2 in what was a very close match! The open section was a whitewash. On paper, Bosnia and Herzegovina didn’t have much of a chance against team USA, and they didn’t in any of the boards except for the one draw they salvaged. Things started off well with So’s destruction of our opponent’s board three: Ray Robson was able to very briefly consult Fabiano Caruana during the team’s photo sessions (pictures of that coming soon!) into which line to play against the Winawer French with b6! White’s attack on the kingside always was dangerous, but Black was playing a strong defensive game, also taking care of White’s queenside. Black’s 21st move was a mistake that allowed Ray to steamroll his opponent. Fabiano Caruana played Dennis Kadric, a player well known in Texas as he attends University of Texas at Dallas! Dennis played quite quickly in a murky position against an extremely well prepared World Championship Contender. When that happens, the result of the game is rarely in question. Black was quickly better after the opening, in which White’s king on h1 was simply weaker than Black’s king on b8 (!) in a Sicilian Kan. American 3-0 Bosnia. You can’t win every game, and much less every game with black. Hikaru Nakamura tried for 75 moves to do so against Dejan Marjanovic, an opponent that our player outrated by nearly 400 points. Kudos to Dejan, there simply wasn’t a moment in which Hikaru had a real edge, and the draw was a natural conclusion to the game. With Poland and Azerbaijan winning their matches, USA is now on clear third. The Olympiad takes place from September 24-October 5 in Batumi, Georgia with rounds everyday at 7 a.m. ET (except for September 29, the rest day). Find more photos and information on the official website, as well as live games in the Open and Women’s sections.  Watch"> Grandmaster Maurice Ashley's latest vlog from Batumi here.
SHARE: