This past turkey day weekend, over 637 players flocked to Charlotte for the US Masters and concurrent North Carolina Open (NCO). With 202 players competing for the $20,000 prize fund from November 23-27, the Charlotte Chess Center (CCC) boasted the largest iteration of the tournament since Dr. Walter High revitalized it in Greensboro a decade ago. The 435 players in the NCO also constituted the largest open tournament ever held in the state.

Beginning a mere day after the CCC's 60-player norm invitational concluded, the event had a distinct international flavor. In total, the diverse field featured players from 37 countries and 32 states.

With 30 GMs and 40 IMs competing, the 2022 edition was also the strongest in the tournament’s history. Many of the country’s top juniors competed, including GM Abhimanyu Mishra, GM Brandon Jacobson, IM Andy Woodward, and IM Dimitar Mardov. 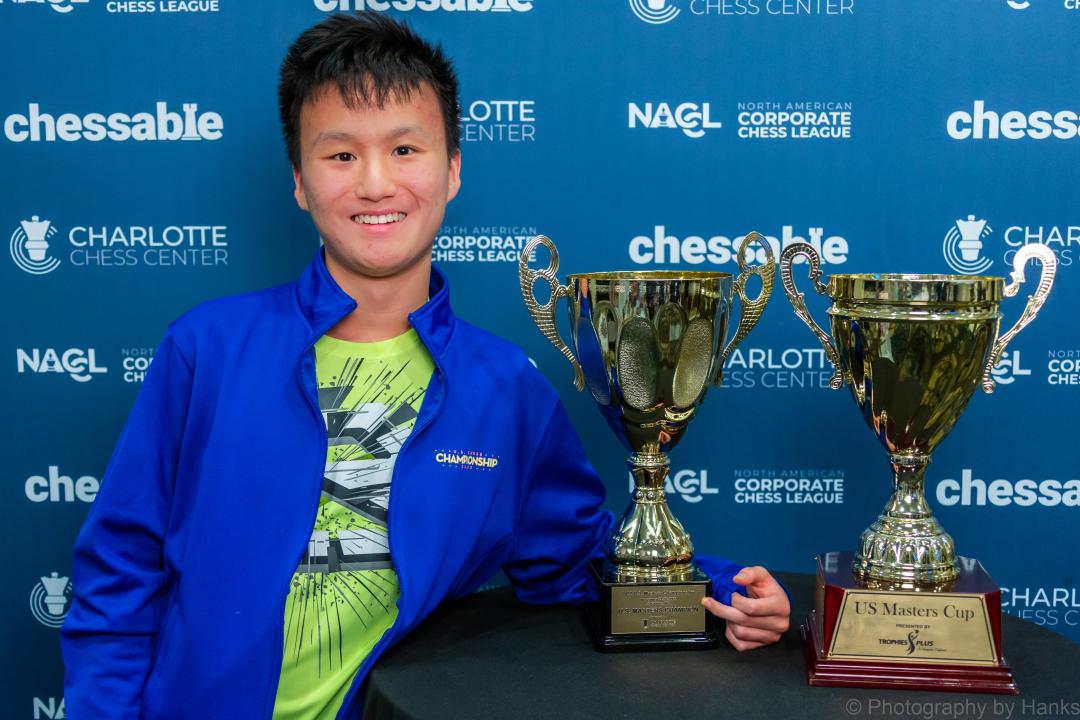 In the end, five grandmasters tied for first place with 7/9. By virtue of having the highest tiebreaks, GMs Christopher Yoo and Alejandro Ramirez squared off in a blitz playoff for the title, trophy, and a $300 cash bonus.

Yoo qualified for the playoff thanks in part to a strong victory with the black pieces over a fellow junior in the penultimate round.

Yoo was joined by Ramirez, who was in fine form all weekend. Here he is out-dueling a familiar name in a positional almost-showdown.

Christopher Yoo won both playoff games in style, earning $2,700 as well as the national title. The US Masters is a lucky tournament for Christopher, who scored his third GM norm at the 2021 edition.

In a large tie for sixth place with 6½/9 were some of the top seeds, including Grigoriy Oparin and Awonder Liang. IM Farai Mandizha (Zimbabwe) and WIM Sila Caglar (Turkey) split the Under 2400 FIDE prizes at 6/9, picking up $900 each. 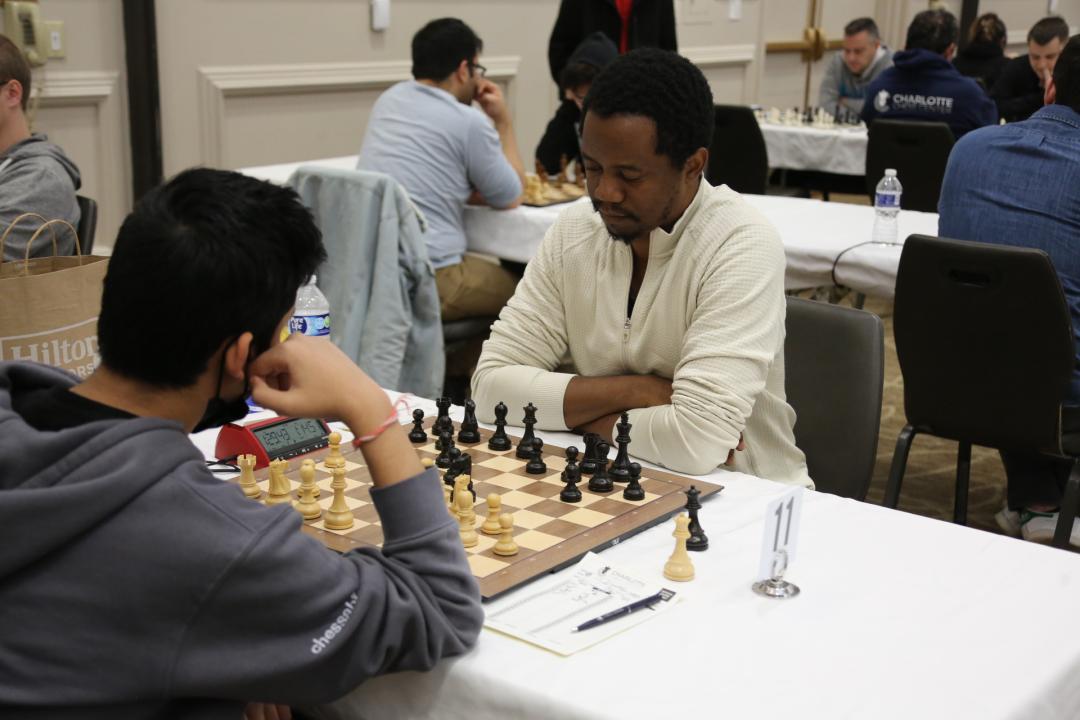 WIM Sila Caglar was in the running for both an IM norm and her final WGM norm going into the final round, but lost a tough game against Greek GM Nikolas Theodorou to end her chances. Despite her loss, Caglar had already clinched the top female prize, and leaves Charlotte with $1,500 in prize money and plenty of rating points. 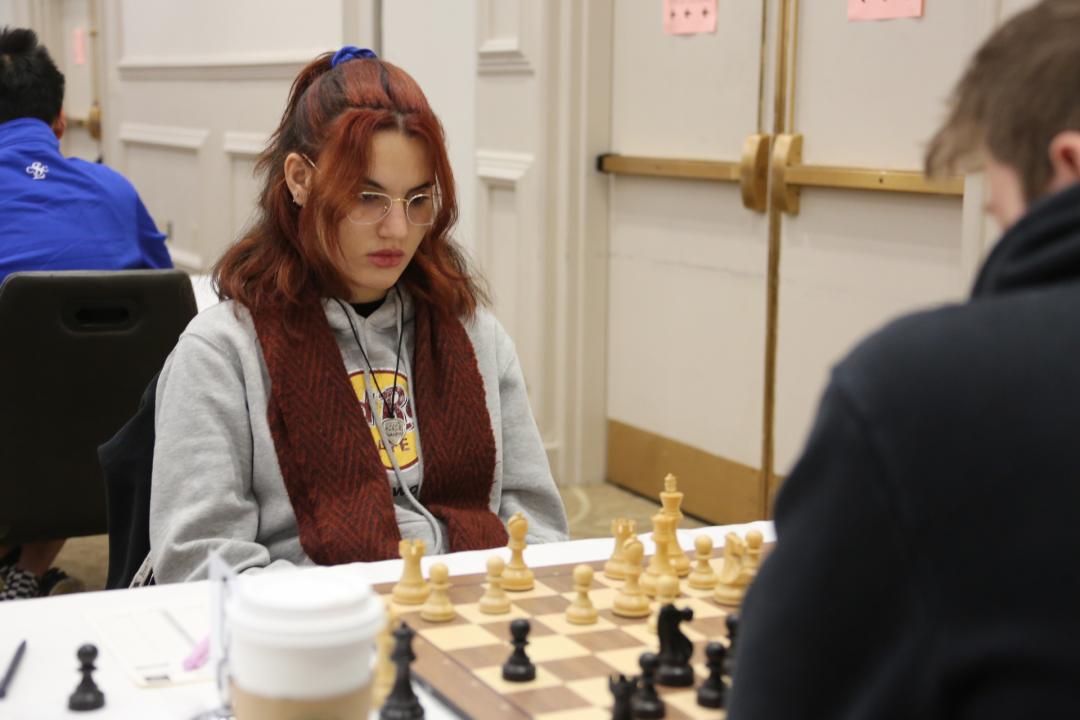 Although eight players were in norm contention heading into the final round, only FM Anthony Atanasov from Canada was able to pull off the necessary win. Needing to win with Black, Atanasov essayed the Petroff against fellow FM Samrug Narayanan and won a 25-move battle to earn his first IM norm. He also split the U2250 FIDE prize with FM Donald Johnson and NM Gabriel Eidelman, each winning $500. 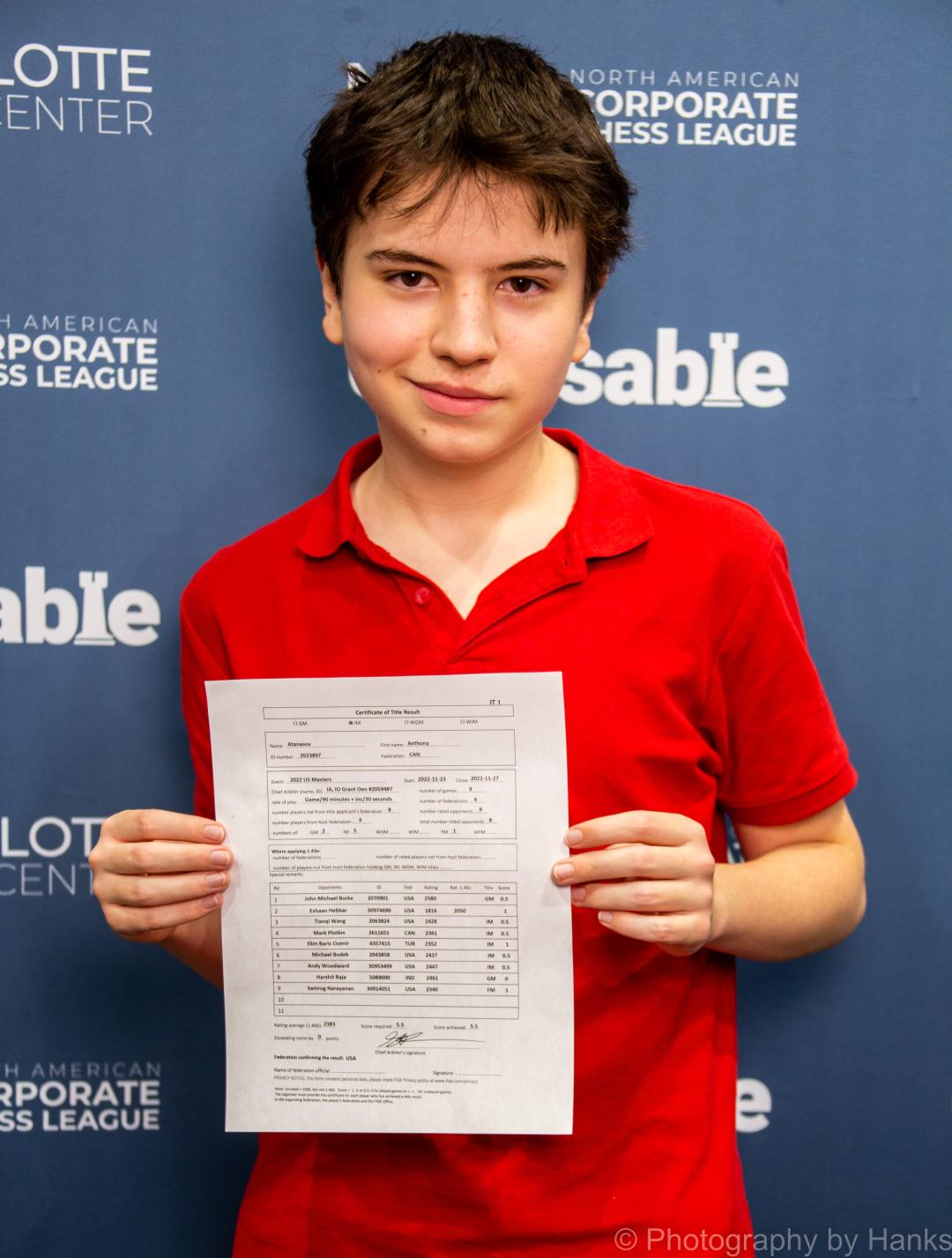 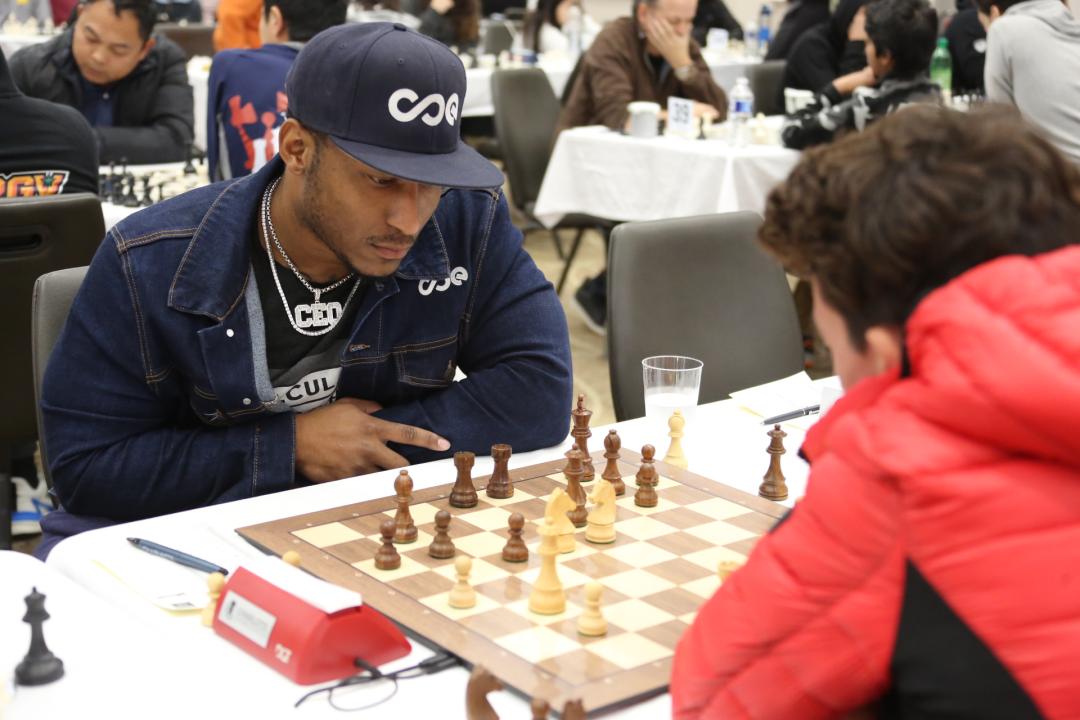 The 2022 NC Open is a perennial event held alongside the US Masters. With special guest IM John Bartholomew, and lots of side events including a 240-player free blitz event, it was the largest open tournament ever held in North Carolina, with a total of 423 players in the main event and scholastics, all competing for $11,000 in prizes. 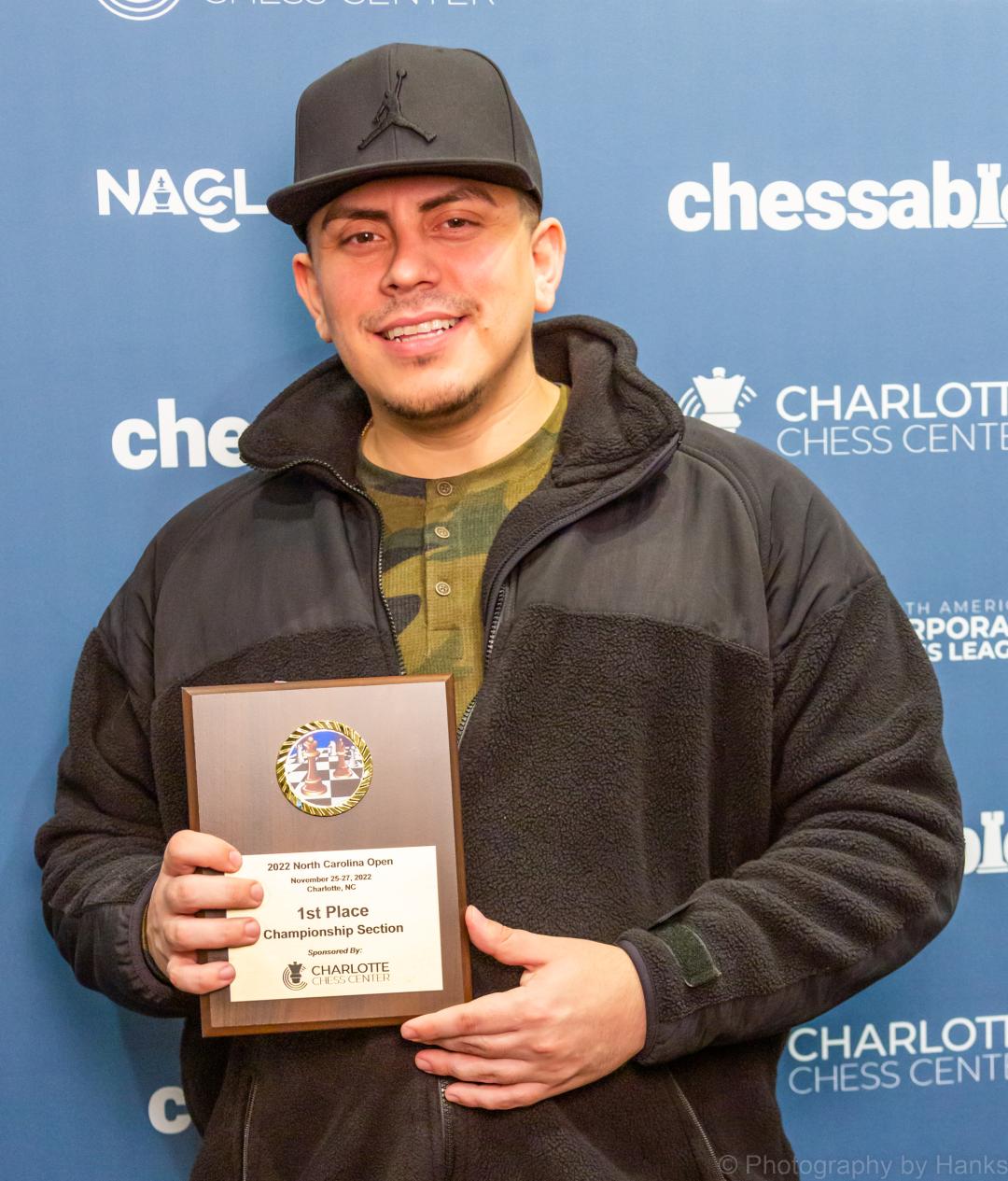 Find standings, results, games, and pictures from the 2022 US Masters and North Carolina Open here. You can also check out a YouTube playlist with interviews from the event.

All in all, it was a huge festival put on by the Charlotte Chess Center in collaboration with Dr. Walter High. Thanks to our sponsors, staff, and partners who made this event possible.  We will be back for Thanksgiving 2023!