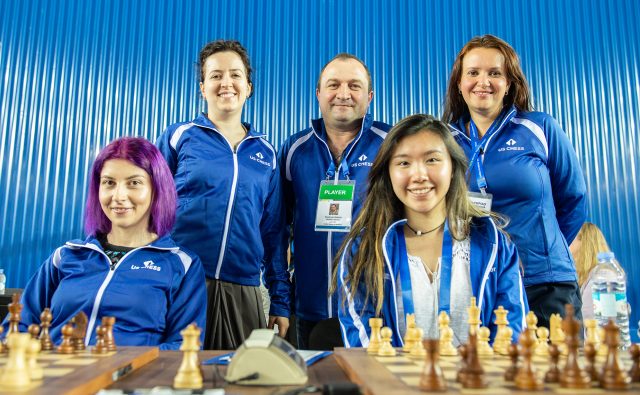 The 2018 Women's Olympiad Team (left to right): Tatev Abrahamyan, Irina Krush, Captain Melikset Khachiyan, Jennifer Yu, and Anna Zatonskih. Photo: David Llada
The second round saw a great improvement in the organization. Despite still having some chaos in the security lines, it moved much faster, and none of the teams were late to the round, which started only a couple of minutes late. Team USA went into the games as clear favorites in both sections, but neither match up proved easy. Luxembourg was our lady’s rivals, and they prepared for a strong match. Things became, at least on paper, much easier when the board line-ups were announced, as Luxembourg did not play their strong 2300 first board, instead allowing their 1600 reserve to play. It is possible that their board one had not yet arrived or was unwell, because this was a big drop in strength for them. 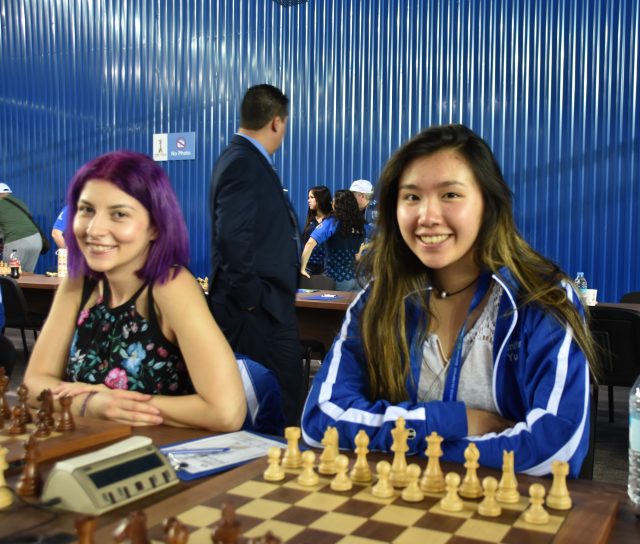 Photo: Alejandro Ramirez
After two hours of play the USA women’s team was having unclear position in boards one and three, but it was Jennifer Yu who demolished her opponent straight from the opening that gave the team their first victory and a boost of confidence. She textbook destroyed her opponent as she had development, and her rival simply did not. This game was clear as crystal from the very beginning. 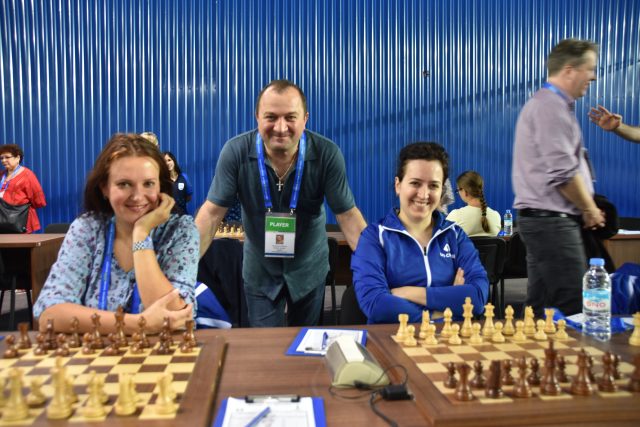 Photo: Alejandro Ramirez
Another game that left no doubts was Irina Krush’s victory over streamer and commentator Fiona Steil-Antoni. Black’s passive play in the dutch was exploited by Irina, who steam rolled her opponent. She grabbed space on the kingside, on the center, on the queenside, just about everywhere! The lack of space was simply too much for Black to handle, and she allowed a decisive attack on her exposed king. Tatev Abrahamyan saw her second black game in a row, as she went down to her natural third board after replacing Irina yesterday in second. She played a solid line of the Nimzo-Indian, ending in an equal position. Slowly but surely, Tatev showed her positional prowess and continuously improved her position, exploiting the weaknesses left by White’s expansion. After Tatev won a pawn, things were still a bit unclear, but a couple of mistakes by her opponent was all the leverage that was needed. Anna Zatonskih played a great tactical combination against her opponent, giving her a clearly winning position. The problem is that she consumed a lot of time in the opening, and had to play with mere seconds for a large portion of the game! Captain Melikset Khachiyan described today as “today… excelento!” Coach Robert Hess was very pleased with his team’s performance. With this 4-0 the team climbs considerably in the standings, and will now face our neighbors of Canada in round three, a match-up in which America is still a clear favorite. Despite these reports focusing on the American squads, a very noteworthy event in today’s women’s section was Russia, the top seed, falling to Uzbekistan in a major upset! The open section team had a relatively close call today, as they barely edged out Georgia 3. Since Georgia is the host country, they are allowed more than one team, up to three if it makes the amount of teams in the Olympiad an even number, so no one has to take a bye at any point. Georgia 3 is a young and talented squad, which was certainly not afraid of our super stars! 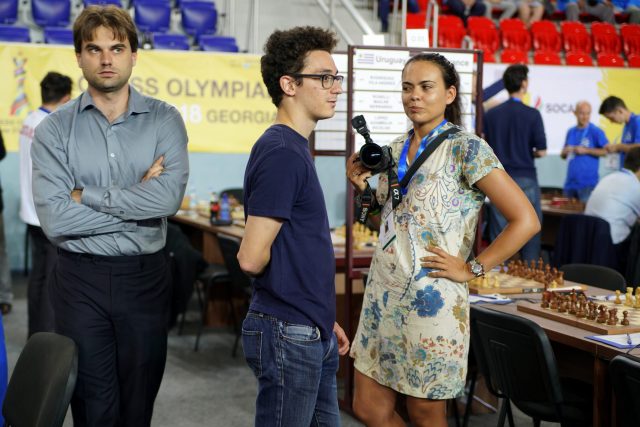 Sam Shankland, Fabiano Caruana, and Maria Emelianova. Photo: Paul Truong
Board one saw the debut of World Championship contender Fabiano Caruana. Playing a not-so-common variation of the Ruy Lopez, Fabi saw himself in trouble after White played many accurate moves. Black’s pawns seemed to be collapsing, and the pressure was certainly on the American throughout the game. Fabi defended tenaciously and was able to hold the draw against an opponent much lower rated than himself. Board three was the biggest of scares, as Sam Shankland was at some point down a pawn with a very slightly worse position, without any real counterplay. Through clever play and resourceful piece positioning, Sam was able to create counterplay with just a queen and a knight, making life difficult for his opponent. At the end, Sam was able to hold an important draw. 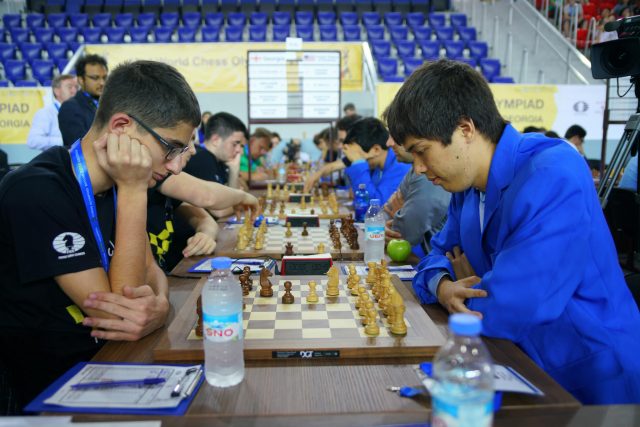 Nikolozi Kacharava vs. Ray Robson. Photo: Paul Truong
Ray Robson’s game on board four was a high intensity game! From the get-go it was clear that the opposite castled positions in the Petroff were going to provide a big and dynamic fight. Ray went for checkmate, his opponent took pawns. Black was up a pawn, though his king was extremely weak. Ray’s bishop, queen, and rook just couldn’t find the angle to create real threats. The eventual queen endgame was double-edged, but the draw certainly a fair result. Wesley So came in huge as he was the person that won a clean game. His positional advantage of having a better structure allowed him a technical and effortless conversion. Tomorrow will be a real test for the reigning Olympic champions, as team USA faces against The Netherlands, led by super-GM Anish Giri on board one. This is one match you certainly don’t want to miss! On a slightly different note, something very unusual happened just before the start of the Colombia vs. China women’s match. Angela Franco, Colombia’s reserve board, was proposed to by Niklesh Jain from ChessBase India just before the round started, and, as far as I know, it is the first proposal to happen on a chess Olympic venue! Angela cheerfully said “Si”! https://twitter.com/chesscom/status/1044580055538683904 The Olympiad takes place from September 24-October 5 in Batumi, Georgia with rounds everyday at 7 a.m. ET (except for September 29, the rest day). Find more photos and information on the official website, as well as live games in the Open and Women’s sections.
SHARE: