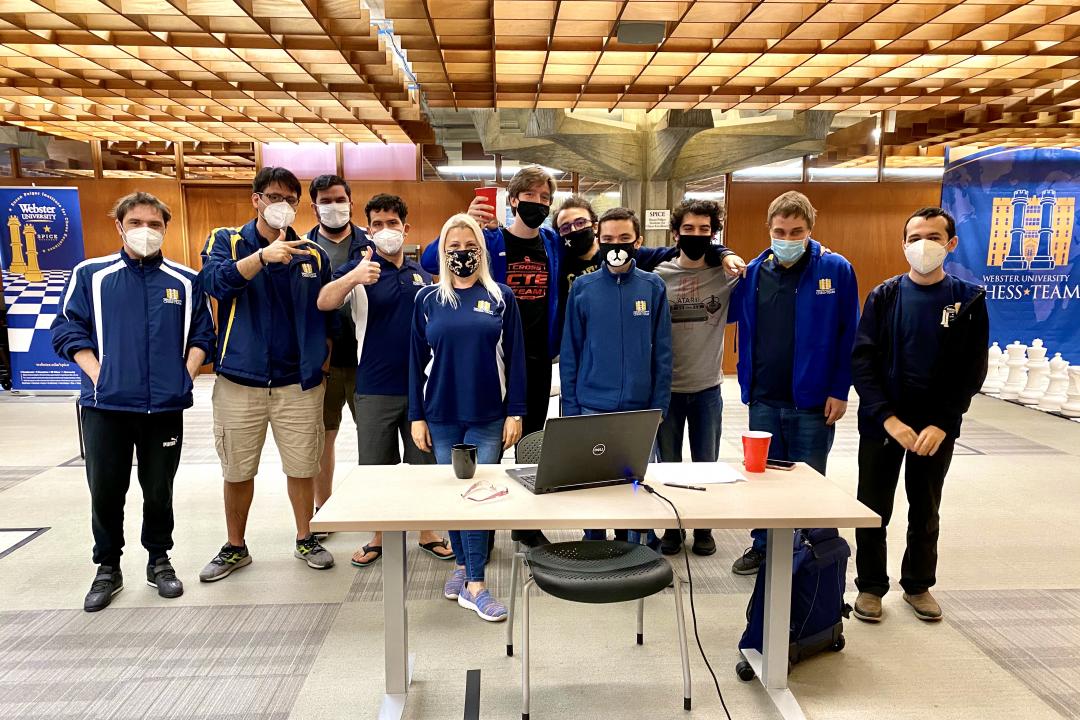 The 2020 National Collegiate Rapid & Blitz Championships were scheduled to be held at Saint Louis University back in March but, like many events this year, the live tournaments were postponed and moved online. Chess players are used to overcoming hardships and challenges, and this transition was no exception. Despite the increased popularity of chess online, organizing an event on the internet with the gravitas of a national championship was no easy feat.

But with an incredible amount of willpower and the cooperation of many different parties, these events were finally held over the weekend of September 26-27 and proved to be incredibly successful. Over 150 students participated in each championship, representing more than 25 schools from around the country.

As chief organizer, it was SLU's duty to determine how this tournament would be played. After exploring many different alternatives, the eventual solution was inspired by a series of tournaments produced by the Charlotte Chess Association, which hosted the games on lichess.org, but with pairings done through SwissSys and overlooked by a tournament director. The pairings were sent to a third-party website where players only needed to click a link to begin their games. (It almost felt like finding your board and sitting down in a real tournament!) Using SwissSys helped avoid an important matchmaking problem: players of the same university must not be paired against each other!

Thanks completely to the efforts of TD Grant Oen and of Webmaster Chacha Nugroho, the tournament went exactly as planned. Several anti-cheating measures were taken, including every player needing to be on a monitored Zoom call. All games were reviewed by the lichess anti-cheating system and Professor Regan's anti-cheating algorithm. No games were found to be suspicious!

The event was streamed live with commentary by NM Caleb Denby and Naycir Gurpinar, and followed live on the Saint Louis Chess Club's twitch channel. The event can be replayed here. 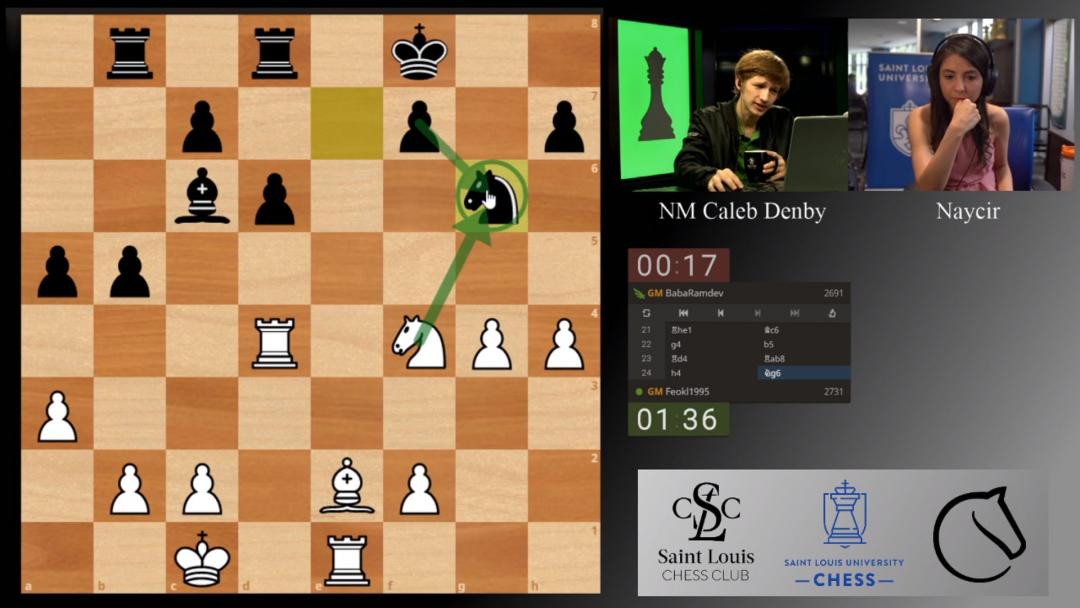 The 9-round Swiss Rapid tournament was held on Saturday with a G/10+5 time control, faster than the traditional over-the-board rapid control of 25+5. The organizers felt that the new online format favored quicker controls, while the OTB time control might feel dragging in an online event. The adjustment also allowed us to add more games into the event, increasing the total rounds from 7, which helped separate the amount of ties at the end.

The blitz portion was played on Sunday, and the time control was maintained at the originally intended 3+2 time control. Since the event was now online, and results could be harvested automatically, the wait time between rounds was unnecessary and reduced to virtually nothing. Once again this allowed us to add games to the event, producing a full 13 rounds – perhaps a marathon OTB, but manageable online. Both tournaments were absolute nail-biters.

In total across the weekend, the following titles were claimed:

The top colleges showed up in full force, and the strength of the tournament was truly jaw-dropping. GM Vladimir Fedoseev from UTRGV began with a commanding 5/5 and never let off the gas, convincingly earning the title of National Rapid Collegiate Champion. Despite his pairings with strong opponents throughout, as well as the tournament finishing past midnight where he was playing from in Russia, Fedoseev showed why he was a 2700+ player not too long ago. He clinched his new title by defeating Mizzou's Gregory Oparin in this absolutely masterful way.

On a side note, aesthetically, Oparin's second round win was incredibly visual. He summarized it in the following Facebook post: 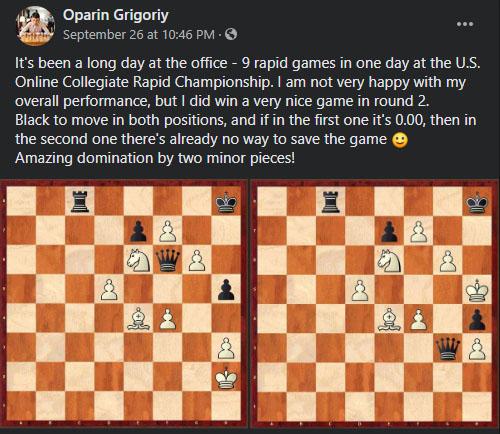 Second place went to Webster University GM Illia Nyzhnyk, finishing with 7.5/9. No stranger to college competitions, Nyzhnyk is an incredibly strong player in classical time controls, but also so fast he is especially scary in rapid and blitz. His third-round loss against Texas Tech GM Pavel Vorontsov was the difference-maker that left him only half-point behind Fedoseev. Also on 7.5/9 was SLU GM Benjamin Bok and IM Nikolas Theodorou, though Bok edged out his teammate on mathematical tiebreaks to earn the third-place trophy.

The U.S. Women's Rapid Champion title went to SLU, as IM Stavroula Tsolakidou proved to be the best female player of the day in a topsy-turvy event for her.

Team scores were calculated as the sum of the top four scorers from each school, and the title of National Team Rapid Champion came down to the wire, with all three UTRGV, Webster or SLU having chances to win the event in the last round. However, it was SLU that hit hard when it mattered, with each of its top scorers going 4-0 in that final ninth round. 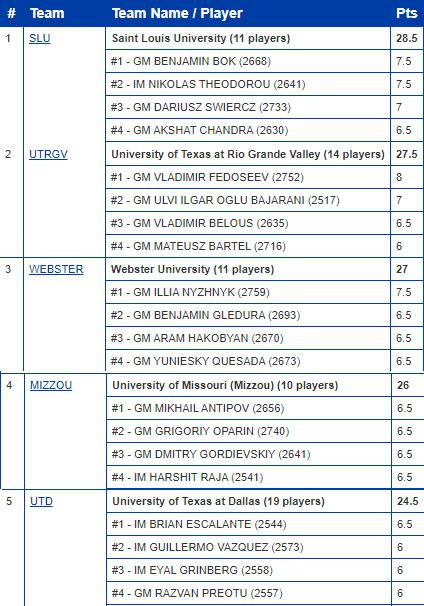 Incredibly, the blitz event was even crazier than the rapid. Temporary tournament leaders kept being brought down, and hot winning streaks kept being struck down. For example, Mizzou GM Christopher Repka blazed out to a 7/7 start, but only managed to score 2/6 in the remainder of the event. At the end of the day, it was again Fedoseev claiming his second title of the weekend, earning the National Collegiate Blitz Champion trophy with a fantastic 11/13 score.

Second and third place were comeback stories by Webster students: GM Yuniesky Quesada began only 3.5/6, but went on to tally six wins and a draw to finish with an amazing 10/13. Quesada was edged on tiebreaks by teammate GM John Michael Burke, who lost early in the second round and again on the sixth, but closed the day 6/7 with two draws. 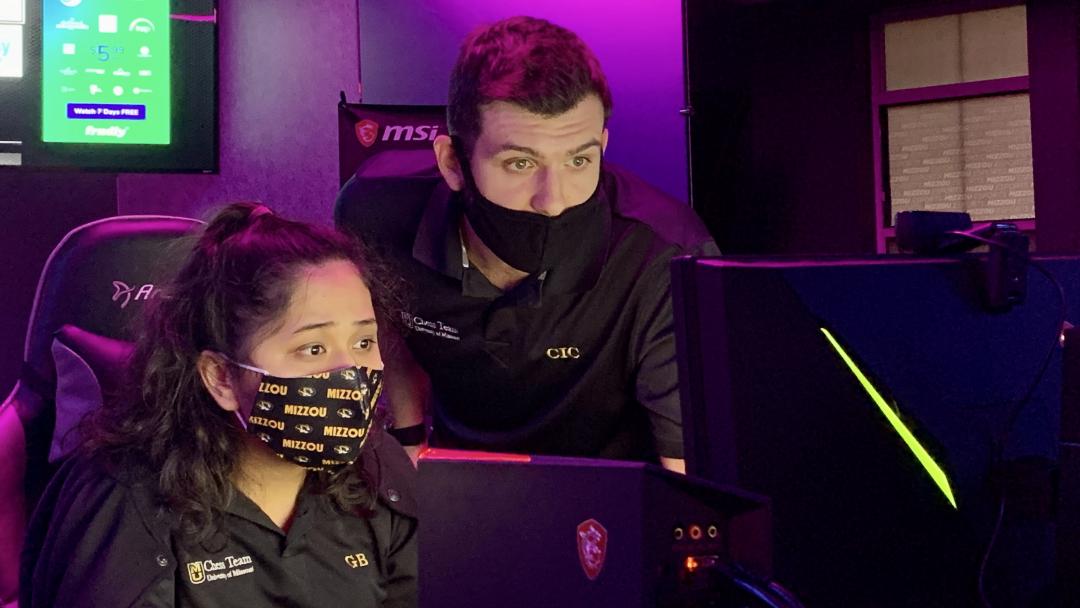 For the team championship, Mizzou, Webster and UTRGV were in contention to win as the tournament wound down to its final rounds, but where Mizzou had some stumbles, Webster showed some impressive chess. The final round saw the Webster team managing to not only claim first place over UTRGV by a full point, but also taking away some important points from Mizzou, which finished third. Webster saw wins from Quesada as well as GM Emilio Cordova over Mizzou GM Mikhail Antipov, which proved to be crucial for the team. 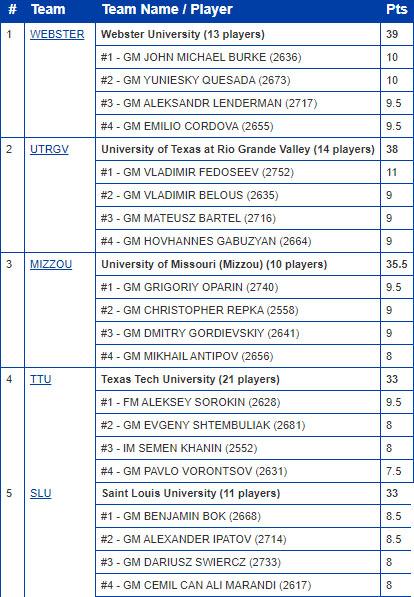 The full list of prizes and standings can be found here.