The Kasparov Chess Foundation (KCF) and the Saint Louis Chess Club have been running the very successful Young Stars program for the past seven years. The program has helped develop several American chess prodigies from across the country, including the likes of GM Jeffery Xiong and GM Sam Sevian. Students receive individualized training sessions with Kasparov’s coaching staff and special training sessions with Garry Kasparov himself. 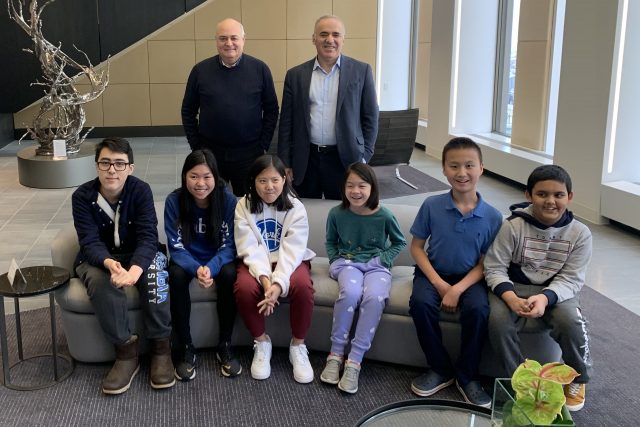 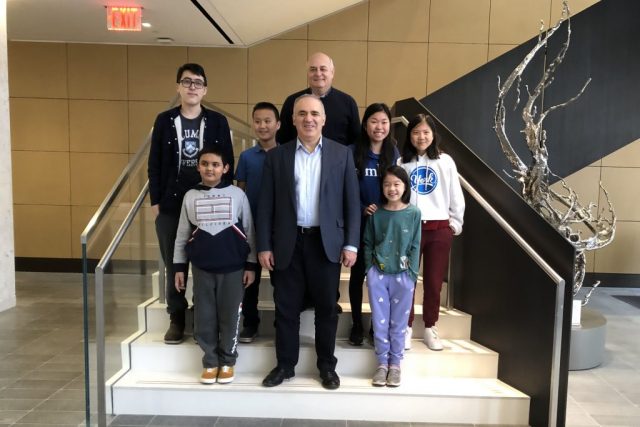 Garry Kasparov and the Young Stars
Renowned Grandmaster and trainer Dmitry Gurevich attended this session and had the following to say:

I was fortunate to be present at two sessions of KCF Young Stars years ago: first time with Sam Schmakel and later with Brian Luo. Both of these students are very talented and bright. Sam became an IM and Brian stopped playing, unfortunately. But, talent aside, this generation is on a totally different level. For example, years ago Garry would go for length to explain some interesting but basic endgames. Now he wouldn’t touch them because they are too simple for the modern youngsters. Brandon, Carissa, Abhimanyu and others are much stronger than the top boys and girls 10-12 years ago. On the other hand their strength is based on computer analysis and preparations and what will come out of it remains unclear. Garry Kasparov seems to be enjoying working with his young students now as much as he did back then. The audience was engaged and responded enthusiastically. I don’t know anybody better and more charismatic than Kasparov, to share his wisdom with the youngsters and give them the resources to reach their peak. We can only wait and see what happens next. Thanks to Michael, the organization was superb now as it was years ago. My student Alice Lee was invited for the next KCF session, and I am looking forward to attend it in Saint Louis in June.

Young Stars has open admission for talented kids from all over the World to apply to this elite program. Candidates may apply by submitting the application found here: KCF YoungStars Application. The program is open for talented players that are nine (9) years of age on January 1, 2020, and not older than thirteen (13) years of age on January 1, 2020. Send the full applications to: youngstars@kasparovchessfoundation.org
SHARE: