The race for the Olympic medals intensifies as we enter round eight in Batumi! The ambiance of the Olympiad has been terrific, with chess being prominently displayed everywhere in the city. Team USA is in high spirits in both sections, having performed quite well so far. In the women’s section, America tried to recover from a tough loss in the previous round against Armenia. Our opponents, the Italian squad, is a combination of experience and youth: they are led by Russian-born Olga Zimina, 36 years of age, on first board and Elena Sedina, 50 years of age, on boards one and two. Their lower boards are Desiree di Benedetto, who just turned 18, and Marina Brunello, 24. Italy’s first board has had a rough tournament so far, scoring 3.0/6 against relatively weaker opponents. She faced the black side of the exchange Slav against Anna Zatonskih. Despite being an opening known for its drawish tendencies, the modern handling of the exchange Slav contains quite a bit of poison. At some point, though, it was Anna that saw herself in trouble as she won a pawn, but her opponent had all the play. An inaccuracy by Olga allowed Anna back into the game and salvaged an important draw. 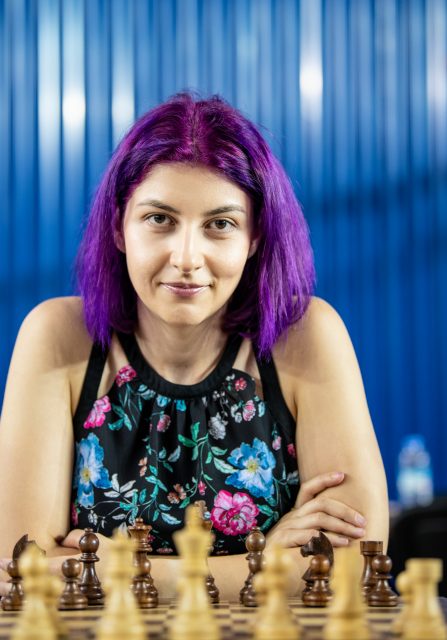 Tatev Abrahamyan. Photo: David Llada
The first game that was clear was Tatev’s win against Desiree. In a very strange turn of events, Desiree blitzed out almost 20 moves of preparation, but as soon as it was her turn to start thinking, she misstepped badly. Only four moves later, her king was getting checkmated, and Sicilian attacks are Tatev’s forte in chess. She made no mistakes and reeled in a full point. This was Tatev’s first white of the tournament. “Playing white is so nice!” she exclaimed after the game. Jennifer Yu played another amazing game, getting into an equal Petroff endgame, and outplaying her opponent in yet another position with few pieces. She missed a win on move 38, in time pressure, that cost her the half point. “I saw that I should have gone 38…Bf2 after 38.Rh1, but I forgot and played 38…Bd8,” said Yu after the game. Still, an amazing performance by our youngster. Irina’s type of Sicilian Maroczy was great for black. She was clearly ahead from the opening, with the black pieces, and, subsequently, won a pawn on the queenside after an excellent exchange of her dark-squared bishop for her opponent’s c3 knight. She pressed for many moves, up a pawn but with only 4v3 on the kingside as the remaining pawns, which gave white real drawing chances. In time pressure, Elina finally cracked in the rook and pawn endgame, and Irina won yet again, bringing her score to 6.5/7! In the open section, the awaited spectacle of USA vs. Azerbaijan did not disappoint. Before the start of the game, it was almost impossible to squeeze a peak into the games past the sea of photographers and journalists taking note and pictures of the games. The Americans came in with a fighting mood, knowing that this could be an essential victory. The first game to finish was an interesting English in Nakamura vs. Naiditsch: 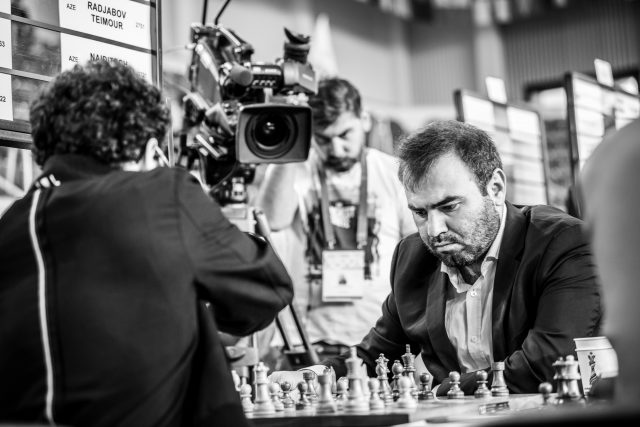 Graphic: 2700chess.com
Board two brought early difficulties for Wesley So, as Teimour Radjabov’s preparation was absolutely on point in the Ragozin: Board four for our open section was Sam Shankland with the black pieces against Rauf Mamedov, who employed an Italian set up. Shankland gave an absolute positional master class in this opening, outplaying his opponent from the very beginning. The way that he secured the dark squares for his pieces while at the same time avoiding any significant counterplay from his opponent was sublime. Mamedov was on the backfoot, defending a passive position, but holding it together however he could. Shankland utilized his space advantage and grip on the position to do a Petrosian-like King walk from g8 all the way to b7, simply to blast open the kingside later without having to worry about his own monarch! Sam ground down Mamedov, step by step, move by move, until the Azeri could not hold his position any more. First, a pawn dropped, then time kept ticking, and Mamedov kept surviving thanks to the increment. Eventually, the defenses were breached, and Sam won a huge game. USA 2.5-1.5 Azerbaijan.
SHARE: