Best of US Chess 2016 #5: Alejandro Ramirez on the Reykjavik Open 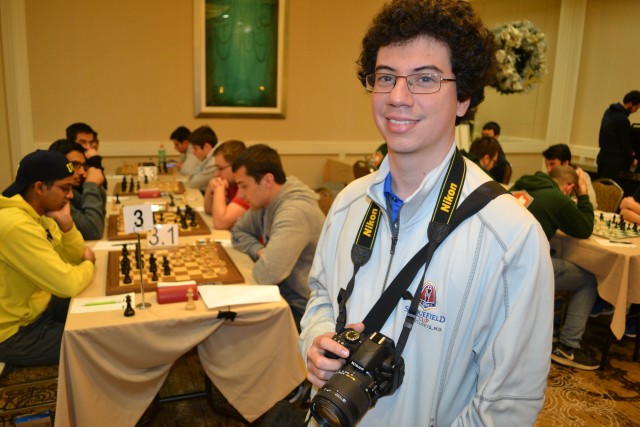 Alejandro Ramirez at the 2016 Pan-Ams. Photo: Al Lawrence
The #5 article in Best of US Chess 2016 is Alejandro on Americans in Iceland by GM Alejandro Ramirez. Judges praised Alejandro's engaging writing style, providing a detailed view of the tournament's personalities and scenic environment. The Reykjavik Open is one of the best tournaments in the World, no doubt about that. Held every year in the capital of Iceland, this open has obtained the reputation of being not only one of the strongest events of the year, but also one of the friendliest and with the best environment to play in. Iceland itself is an absolutely beautiful country, with amazing sights, waterfalls, geysers and enough touristic attractions to last several weeks. Indeed, Reykjavik attracts many tourists – up to 1.5 million per year, which is almost five times the population of the entire country! The tournament is held in the Harpa concert hall, a beautiful and spectacular building which oversees the bay. When it is sunny, it is possible to see a wonderful view of the surrounding glaciers and snowed in mountains around Reykjavik. In the windy days, you can see (and hear!) the snowstorms from inside the hall, while sipping on some hot chocolate and playing your game. With “only” one round a day, the event gives enough time for players to walk and explore Reykjavik, and sometimes even attend certain tourist expeditions. There are a slew of side events, which include soccer, a pub quiz, blitz events, tours to waterfalls and geysers, and even a backgammon tournament! That tournament is certainly amazing as a half tourist, half tournament destination, but if one wants to take the event seriously, it is also one of the strongest events of the year. The starting list saw some incredibly strong players at the top: Shakhriyar Mamedyarov, Dmitry Andreikin, Richard Rapport, Gabriel Sargissian, Ivan Cheparinov, only to name a few. For this reason, many Americans attended the tournament, to face against some of the best players in the World. Some did it seeking norms, others did it for fun, while we even had two people do it as preparation for the upcoming U.S. Championship! Alejandro Ramirez is a regular contributor for US Chess News. His article, Four Medals in Greece: "This is real chess", made the Best of US Chess 2015 Top 10. Alejandro is also the head coach of the chess team at St. Louis University, which he led to a 3rd place finish and qualification for the College Final Four at their debut at the 2016 Pan-American Championships.

"Alejandro paints a picture of the Reykjavik Open in a way that makes me want to jump on the next flight to Iceland."

"Ramirez is not only a gifted online commentator but he also is a talented journalist who brings alive the tournament drama, key games, and personalities."

"This article boasted variety not often seen in chess articles. It offered a glimpse into the lives of several American chess players at a famous tournament. With no shortage of games and pictures, the article painted a beautiful picture varying successes for each player, while also saying a bit about their histories."

"The Reykjavik Open doubles as both a scenic vacation destination and a serious top-level chess tournament. The author shares his own experiences as well as the results of a half dozen other American masters.  I particularly enjoyed the selection of fighting games, especially the annotations on the instructive loss by Awonder Liang against the eventual tournament winner.  Warning to readers: just don't try too hard to understand Marc Esserman's draw with Richard Rapport."

"This article made me want to play the Reykjavik Open and sip some hot chocolate while watching snowstorms from the playing hall window. Alejandro’s piece was well-detailed and fun to read. The were many great insights into the events happening on and off the board."

#5 - Alejandro on Americans in Iceland by Alejandro Ramirez